Cereal bioactive compounds, especially polyphenols, are known to possess a wide range of disease preventive properties that are attributed to their antioxidant and anti-inflammatory activity. However, due to their low plasma concentrations after oral intake, there is controversy regarding their therapeutic benefits in vivo. Within the gastrointestinal tract, some cereal polyphenols are absorbed in the small intestine, with the majority accumulating and metabolised by the colonic microbiota.

Cereals such as wheat, rice, oats, barley and sorghum are grown and consumed as staple diets globally Cereals are edible seeds or grains of the grass family, Gramineae that have structural similarities: an outer bran layer, endosperm and embryo [1]. With the increase in chronic conditions such as obesity in developed countries and malnutrition in developing countries, cereal grains, due to their health benefits and affordability, provide nutritional value and food security, respectively. Substantial research has attributed the health benefits to bioactive compounds in whole grains, particularly micronutrients such as polyphenols.

Polyphenols are plant-based compounds (found in fruits, vegetables and grains) that have demonstrated bioactive properties including antithrombotic, anti-inflammatory and antioxidant properties both in vitro and in vivo [2][3][4][5]. They are a large group of heterogeneous compounds characterized by their basic structure consisting of a benzene ring with hydroxyl constituents [6]. For example, flavonoids, specific groups of polyphenols with A, B and C aromatic rings, exert antioxidant activity dependent on the functional groups attached and the degree of hydroxylation on the rings [7]. Among cereal grains, the phenolic composition may vary due to many factors such as environmental conditions, variety and pigmentation [8][9][10].

The coloured rice, rich in anthocyanin—the polyphenol responsible for pigmentation—also displayed strong antioxidant and anti-inflammatory activity in vitro and ex vivo [11]. Although studies in the past have attempted to investigate this interaction using polyphenols from various other food sources, an understanding of the role of cereal polyphenols is limited [12][13][14][15]. This review will provide an overview of the role of gastrointestinal (GI) digestion in the modulation of cereal polyphenol bioavailability. will be discussed by evaluating studies on dietary polyphenol bioaccessibility, the impact on intestinal barrier function, gut microbiome, and the associated antioxidant and anti-inflammatory plasma effects.

The common phenolic compounds found in cereals include flavonoids and phenolic acids, classified as hydroxybenzoic or hydroxycinnamic acids [9]. Hydroxybenzoic and hydroxycinnamic acids possess free radical scavenging ability due to their polarity and hydroxyl groups (Table 1). One of the most abundant phenolic acids in cereals, ferulic acid, has one hydrogen atom from its hydroxyl group that can react with a free radical to exhibit antioxidant activity [9]. Other phenolic acids such as protocatechuic acid and caffeic

Flavonoids contain functional groups that enhance both antioxidant and anti-inflammatory activity [16]. Flavones such as apigenin possess the 2,3-double bond and 4-keto group of the C ring that contribute to their antioxidant and anti-inflammatory activity and enhance affinity to target protein receptors [16]. but with low bioavailability (1–100 nmol/L of total anthocyanin plasma concentration following doses of 0.7–10.9 mg/kg in human studies) However, most of these structure–activity studies on cereal polyphenols have been undertaken in vitro and thus may not reflect the bioactivity observed in vivo especially after cereals undergo GI digestion.

Cereal grains when ingested travel first through the GI tract before being metabolised further by the liver and then entering the systemic circulation (Figure 1). The polyphenol-containing bolus then travels to the stomach where it undergoes gastric digestion involving gastric juice containing hydrochloric acid, pepsin, lipase, mucus, electrolytes and water [17]. Some polymeric polyphenols such as procyanidins can be degraded into smaller units during gastric digestion, but there is limited information on the impact gastric digestion has on the bioactivity of cereal polyphenols [18]. Evaluation of the structure–activity relationship of mono- and di-glucosyl anthocyanins reveals that they are better ligands for the bili-translocase than their corresponding aglycones [19]. 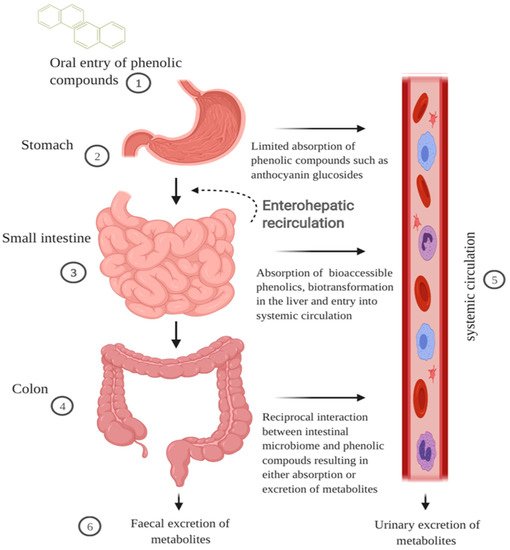 Figure 1. Schematic illustration of the impact of GI digestion in modulating bioavailability of cereal polyphenols. Cereal polyphenols travel through the digestive tract post-ingestion and the majority accumulate in the gut. (1) The cereal matrix forms a bolus and enhances the solubility of hydrophobic polyphenols. (2) Phenolic compounds such as anthocyanin glycosides can be absorbed quickly at the gastric phase. (3) In the small intestine, low molecular weight phenolic compounds are absorbed through active transport or sodium-dependent glucose transport. The first pass metabolism of polyphenols begins in the enterocytes and liver phenolic metabolites return to the intestines via the bile duct excretion. (4) The majority of polyphenols including polymeric compounds and phenolic acids bound to fibre are metabolised in the colon into smaller molecular weight forms that are bioaccessible. (5) Phenolic metabolites in the plasma are transported either freely or bound to blood proteins such as albumin to exert bioactivity in surrounding cells or tissues. (6) Phenolic metabolites are excreted in faeces or urine via the gut or blood, respectively. The figure was created with BioRender.com.

In the small intestines, the digesta from the stomach is neutralised by sodium hydroxide allowing intestinal enzymes to catabolize the food matrix [20]. However, it is postulated that, due to the hydrophilic nature of some glycosylated flavonols and derivatives of hydro-cinnamic acid, they may be readily soluble in the aqueous environment, whereas less soluble phenolic compounds such as flavonoid aglycones or procyanidins are bound to dietary fibre and proteins [17]. The stability of the phenolic compounds has been attributed mainly to the pH, with some phenolic compounds being degraded through non-enzymatic oxidisation. The discrepancy in the quantification of anthocyanins is due to the pH-dependent equilibrium of the flavylium cation form to other related structural forms above pH 2 [21].

It is unclear what specific transport mechanisms are involved in polyphenol intestinal absorption. For monomeric compounds such as cinnamic acid and ferulic acid, a Na+ dependent transport mechanism has been postulated [22][23]. However, anthocyanins such as cyanidin 3-glucosides (C3G) are not substrates to either CBG or LPH but their absorption may be competitively inhibited by the presence of other flavonoids [21][24]. Nonetheless, the lack of enzymatic degradation of some polyphenols as well as their interaction with other dietary antioxidants in the cereal matrix may allow them to accumulate in the colon and exert bioactive functions therein [25].

Polymeric or oligomeric compounds such as pro-anthocyanidins, due to their high molecular weight, are unlikely to be absorbed in the small intestine, but pass through to the colon [24]. Dietary fibres such as xylose, cellulose, β-glucans, and arabinoxylans that are bound to polyphenols are substrates of microbial catabolism resulting in the production of short-chain fatty acids and the release of polyphenols for absorption [26]. Ferulic acid, found in the bran and aleurone layer of cereals, is usually bound to arabinoxylans and can be released by hydrolysis of ester linkages [27]. The absorption in the intestines is due to the size or number of sugar moieties such as arabinose and xylose.

The pathway of metabolism for polyphenols is similar to xenobiotics (substances foreign to the body such as environmental chemicals and drugs) and thus involves extensive metabolism to counteract any potential toxic effects [28]. During the first pass metabolism of polyphenols, three main conjugations occur in the small intestine and the liver—glucuronidation, sulfation and methylation [29][30]. Interestingly, sulphate and glucuronate metabolites of ferulic acid and caffeic acid have been shown to retain their strong bioactivity when compared to their parent compounds [31]. This highlights the possibility of cereal phenolic metabolites to retain strong bioactivity locally in the gut and systemically in plasma.

This warrants confirmation by investigating polyphenolic binding affinity using improved detection and measurement tools. Examination of urinary and faecal excretion demonstrates that cereal consumption results in lower molecular weight phenolic compounds such as ferulic acid, dihydro-ferulic acid, hippuric acid, and hydroxy-hippuric acid [32][33]. These phenolic compounds may result from the absorption of compounds from the small intestine via colonic catabolism of polymeric compounds, or release compounds bound to the cereal fibre. The impact of the phenolic compounds on the intestinal environment is particularly important as the compounds metabolised in the liver return to the small intestines via the bile duct in a pathway known as enterohepatic recirculation resulting in more exposure to bio-transformed polyphenols [34].

3. Polyphenol Bioaccessibility in the GI Tract

Results indicated that date seed powder and extract recovered more phenolic compounds than the bread form. Furthermore, it was observed that the phenolic compounds increased as digestion progressed (vanillic acid recorded 91% and 89% recovery following digestion of the powder and extract form). This observation agreed with the study by Chandrasekara and Shahidi [37] which demonstrated that total phenolic content increased during in vitro GI digestion of cooked millet grains. [38] that demonstrated an increase in phenolic acids and flavonoids but a significant reduction in antioxidant activity after digestion of different apple varieties.

Interestingly, anthocyanins and phenolic acids in purple rice phenolic extracts have been shown to exhibit antioxidant and anti-inflammatory effects in vitro [39]. [40] demonstrated that, among the polyphenols recovered, phenolic acids were the predominant compounds transported across a Caco-2 cell monolayer. In comparison, a cross-over dietary intervention trial employing the same three forms of the same date seeds observed significant antioxidant effects in blood in conjunction with an abundant release of polyphenol metabolites including simple phenolic acids in the urine [41]. Together, these studies display the potential of bioaccessibility models to predict in vivo bioavailability of polyphenols.

The cereal grains with higher fibre content displayed lower bioaccessibility levels of polyphenols indicating the ineffectiveness of digestive enzymes in releasing conjugated polyphenols when compared to microbial enzymes (Table 2). It should be noted that there is a lack of a standardised approach to measuring bioaccessibility and predicting polyphenol bioavailability. However, the bioaccessibility of polyphenols post-digestion can be reduced significantly, and consequently in vivo bioactivity may be attributed to the metabolites present. Since cereal polyphenols travel to the colon during digestion, it will be of interest to investigate the impact of simulated GI digestion on the bioactive properties of the polyphenols and their potential impact on gut health.

Gut microbiota is a regulator of intestinal and systemic health that is gaining much attention due to its multifaceted role in modulating host immune response and metabolism [42][43]. These bacterial communities maintain intestinal barrier integrity by detoxifying xenobiotics, competing with pathogenic bacteria and keeping the mucosal immune system active [44][45]. The composition of the microbiome can be altered by factors including age, delivery pattern, drugs and diet [46]. Metformin, a drug that regulates systemic metabolism by reducing blood glucose, has been shown to alter the gut microbiota composition, thereby suggesting the gut microbiome as a possible signalling pathway for the drug to exerts its physiological functions [47].

There is growing interest in understanding polyphenol interactions with gut microbiota as a key link to explain the health benefits observed in metabolic diseases [48]. [49] using an in vitro fermentation model of the gut microbiota showed that the whole oat bran, rather than its main bioactive polyphenols, induced an increase in Bifidobacteriumand short-chain fatty acids. These metabolites coupled with the parent compound AVN were shown in the study to induce apoptosis in colon cancer cells thus potentially promoting gut health. This presents an interesting area of research into clarifying mechanisms by which oat bran polyphenols mediate systemic effects by interacting with the gut microbiome in vivo.

[50] demonstrated that red rice bran polyphenols increased the relative abundance of Faecalibacterium—beneficial bacteria producing butyrate. In the study, however, combined supplementation of ferulyated arabinoxylan oligosaccharides and rice bran phenolic extracts exerted a stronger prebiotic effect—that is, an increased abundance of butyrogenic bacteria, namelyCoproccusandRoseburi. Results demonstrated that Sumac and Black sorghum bran polyphenols independently stimulated the growth ofRoseburiaandPrevotellabut worked together with a prebiotic, fructo-oligosaccharide to promote the growth ofBifidobacteriumandLactobacillus. Furthermore, pro-anthocyanidins are converted by the gut microbiota into lower molecular weight phenolic acids which may have bioactive relevance in vivo [51].