Flecainide is an IC antiarrhythmic drug (AAD) that received in 1984 Food and Drug Administration approval for the treatment of sustained ventricular tachycardia (VT) and subsequently for rhythm control of atrial fibrillation (AF). Currently, flecainide is mainly employed for sinus rhythm maintenance in AF and the treatment of idiopathic ventricular arrhythmias (IVA) in absence of ischaemic and structural heart disease on the basis of CAST data. Recent studies enrolling patients with different structural heart diseases demonstrated good effectiveness and safety profile of flecainide.

Flecainide is a class IC antiarrhythmic drug (AAD) that was first synthesized in 1972. It was approved by Food and Drug Administration in 1984 for the treatment of symptomatic sustained Ventricular Tachycardia (VT), with a 90% efficacy and without significant adverse events [1][2]. Nowadays flecainide is mainly used for pharmacological conversion and sinus rhythm maintenance in patients with atrial fibrillation (AF) or supraventricular tachycardias [3][4]. The Cardiac Arrhythmia Suppression Trial (CAST) investigated the impact of class IC antiarrhythmic treatment on morbidity and mortality in patients with reduced ejection fraction and frequent premature ventricular complexes (PVC) after myocardial infarction (MI). Published in its preliminary form in 1989, CAST study recorded significantly higher mortality among patients treated with IC AADs compared to placebo and was prematurely dismissed [5].
The CAST study provided a major revision of the role of flecainide, which is therefore recommended in selected patients with preserved systolic function and without ischaemic heart disease [6]. Otherwise, flecainide is contraindicated in patients with previous MI even with preserved ejection fraction and should not be used in case of proved inducible ischaemia. In addition, the current guidelines extended the CAST findings to non-ischaemic structural heart disease despite limited evidence [6].
Thus, the CAST significantly affected and restricted the current use of flecainide in clinical practice causing a fall in employment of class IC AADs in favour of class III AADs [7][8] and exposing patients to the numerous adverse reactions and toxicities of these drugs, in the absence of robust evidence [9][10].
It is important to underline the paucity of available regarding patients with subcritical coronary artery disease (CAD) without previous MI or inducible ischemia with preserved systolic function and in patients with non-ischaemic structural heart disease. On the other side, recent studies demonstrated the safety and efficacy of flecainide in patients with extrasystole-induced cardiomyopathy or Arrhythmogenic Right Ventricular Cardiomyopathy (ARVC) and no Left Ventricular (LV) dysfunction [11][12][13][14].

VT is commonly seen in medical practice, not rarely in its most feared consequence, Sudden Cardiac Death (SCD). The American Heart Association (AHA) reports over 550,000 annual cardiac arrests, representing half of all cardiovascular deaths [15].
Most patients with sustained VT have underlying structural heart disease such as prior MI, dilated non-ischaemic cardiomyopathy, cardiac sarcoidosis and ARVC [15]. The overall incidence of sustained VT during an acute MI is approximately 10.2% with a high in-hospital mortality rate up to 27% [16]. VT in patients with structural heart disease often causes deleterious haemodynamic effects and is correlated with an increased risk of SCD, particularly in the elderly [17].
VT can also arise in otherwise normal hearts, Idiopathic Ventricular Arrhythmias (IVA); idiopathic PVCs are the most common arrhythmia in patients with normal heart: approximately 40% of adults experience PVCs on 24-h Holter monitoring [18]. IVAs may be classified into several subtypes according to the origin site. The ventricular outflow tracts are the most common origins of IVAs. Approximately 50% of IVAs originate from the Right Ventricular Outflow Tract (RVOT) [19]. Other origins include the Left Ventricular Outflow Tract (LVOT) (15%), the epicardial myocardium, the great cardiac veins and rarely the pulmonary artery [6][19].
Idiopathic left VTs include verapamil-sensitive left fascicular VT (10%), Bundle Branch Reentry Tachycardia (BBRT) (6%) and rarely interfascicular VT and focal Purkinje VT [6][20].
In a minority of patients, VTs or PVCs may arise from the right or left ventricular papillary muscles (7%) and from the mitral or tricuspid annulus (10%) [6][21].

Overall, three mechanisms could be the cause of ventricular arrhythmias: abnormal automaticity, triggered activity and reentry [22][23].
Abnormal automaticity refers to spontaneous depolarization of cells without pacemaker function, as working atrial and ventricular myocardial cells, due to a decrease of membrane potential. Abnormal automaticity is the leading cause of accelerated idioventricular rhythm and it’s caused by ischaemia, electrolyte disturbances and drugs increasing adrenergic tone [24].
The triggered activity results from early or delayed afterdepolarization in ventricular myocytes during phases 2 and 3 or phase 4 of the action potential. It occurs as a result of cyclic adenosine monophosphate dependent diastolic release of intracellular calcium; idiopathic RVOT tachycardia is an example of triggered activity [25][26].
Reentry is the most frequent mechanism causing serious ventricular arrhythmias and occurs when a PVC encounters a heterogeneously conductive substrate within the ventricular myocardium, consisting of two conduction pathways with a different conduction velocity and refractory period. Reentry is the postulated mechanism for VT occurring in a patient with an established scar from prior infarction [27]. VT in non-ischaemic cardiomyopathy is usually due to reentry and is mediated by idiopathic patchy intramural scar. In the case of hypertrophic cardiomyopathy, VT often originates from reentry circuits at the septal level or in the area of localization of hypertrophy at the level of the LV [28].

During IVAs haemodynamic impairment or serious symptoms are unusual, but patients can have palpitations, atypical chest pain or LV dysfunction. IVAs are distinguished by whether or not they originate from the outflow tracts and display specific electrocardiographic features [29].
The RVOT is the most common site of origin of idiopathic outflow tract ventricular arrhythmias and is characterized on electrocardiogram (ECG) by a positive QRS complex in the inferior leads and a Left Bundle Branch Block (LBBB) morphology. The origins of RVOT and LVOT can be distinguished on the ECG by the precordial R-wave transition from a predominate S wave to a predominate R wave (rS to Rs). Transitions before V3 indicate an LVOT source and after V3 indicate an RVOT source [29][30][31][32], as seen in Figure 1. When LBBB QRS morphology is observed and the precordial transition occurs at V3, comparison to the patient’s sinus rhythm precordial transition can be useful: a V2 transition ratio ≥ 0.60 suggests LVOT origin with high sensitivity and specificity [33][34]. 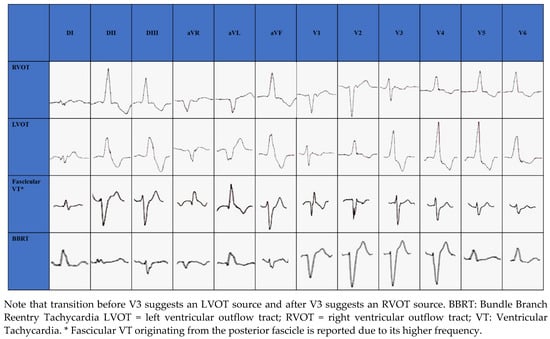 Figure 1. Electrocardiographic morphology of RVOT, LVOT, Fascicular VT and BBRT.
Among non-outflow tract IVAs, LV papillary muscles are a common site of origin. The postero-medial papillary muscle origin, which is the most common, is characterized by RBBB morphology with superior axis, while the antero-lateral papillary muscle origin is characterized by RBBB and inferior axis [35].
In structurally normal hearts, fascicular VT is generally caused by reentry circuit [36]; ECG morphology changes according to the exit site of the circuit from the retrograde-conducting fascicle: RBBB appearance with a left axis deviation if fascicular VT exits from the left posterior fascicle (90%) (Figure 1); RBBB appearance with a right axis deviation if VT exits from the left anterior fascicle [36]. Simultaneous anterograde activation of the left anterior and posterior fascicles with slow retrograde conduction through a separate septal fascicle can lead to upper septal fascicular VT (<1%), with narrow QRS (QRS < 110 ms) and normal axis [36][37].
BBRT is a macro reentrant tachycardia using the bundle branches as reentrant circuit pathways and is typically described in patients with bundle branch block. The most common morphology is the LBBB with a QRS ≥ 160 ms [6] (Figure 1).

Flecainide binds to open-state of fast inward Na+ channel Nav 1.5 in a rate and voltage-dependent manner [38]. The main result of flecainide is a reduction in the slope of phase 0 of monophasic action potential of His-Purkinje tissue and ventricular myocardium resulting in a slow-down of the conduction velocity with a prolongation of HV and QRS intervals, as seen in Figure 2. During a resting heart rate and in a healthy myocardium, the prolongation of HV and QRS is about 10%. The flecainide effect on slowing conduction velocity is proportional to heart rate [38]. Moreover, it is also very effective in areas already characterized by very slow conduction velocity. Usually, VTs with a low heart rate are caused by very slow conduction isthmuses and flecainide is very effective in these cases as it slows down conduction until the tachycardia is interrupted.

Figure 2. The effects of the flecainide on the cardiac action potential. The main effect of flecainide is a reduction in the slope of phase 0 with a minimum elongation of the action potential.
In addition, flecainide has an inhibitory action on the rapid component of the delayed rectifier K+ current and Kito channels [39]. Globally, flecainide increases the duration of the action potential and the effective refractory period in the myocardium, despite they are both reduced in the Purkinje system, due to the blockade of Na+ channels [40]. On the other hand, flecainide is highly efficient in the treatment of Catecholaminergic Polymorphic Ventricular Tachycardia (CPVT), which is usually characterized by a high heart rate [41]. In this arrhythmia, however, the efficacy seems to be due to a different mechanism of action. Indeed, CPVT is induced by calcium overload due to sympathetic activation and to a diastolic calcium release from the sarcoplasmic reticulum through defective leaking ryanodine receptor (RYR) 2 channels. Flecainide blocks the RYR2 channels allowing direct targeting of the molecular defect [42].
The above mechanisms of action contribute to the efficacy of the drug in the treatment of ventricular arrhythmias, as seen in Figure 3. 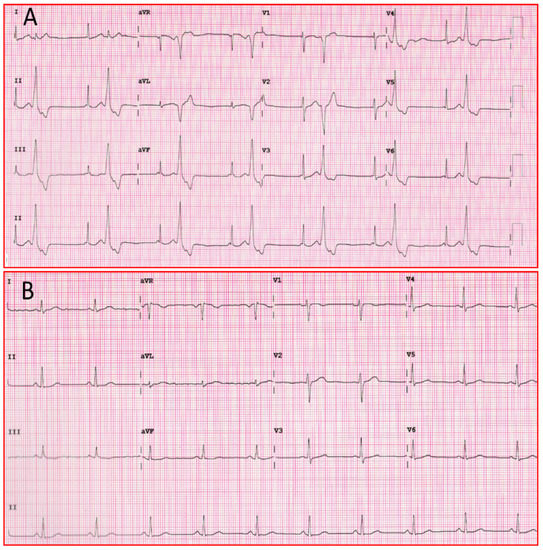 Figure 3. (A) Twelve-lead ECG of patient with ventricular bigeminism. (B) Twelve-lead ECG of the same patient one hour after taking a flecainide tablet. ECG: electrocardiogram.
Flecainide is also effective in Long QT Syndrome (LQT) type 3 as it inhibits not only the peak but also the late component of the Na+ current, causing a shortening of the QT interval. This form, indeed, is caused by mutations that increase the late Na+ current [43]. In addition, flecainide reduces Na+ and Ca2+ influx into myocardiocytes causing a negative inotropic effect and a reduction of cardiac output, particularly in patients with CAD or LV dysfunction [38].
Flecainide, due to its pharmacodynamics, widens the PR (17–29%), QT interval (3–8%) and QRS complex (11–27%) [44][45]. In 3–5% of cases flecainide causes conversion of AF to atrial flutter with a slow atrial rate leading to 1:1 atrioventricular conduction with high ventricular response [46]. However, this phenomenon can be prevented by concomitant therapy with negative dromotropic agents (beta-blockers, verapamil, diltiazem or digoxin) [47]. The main non-cardiac side effects are dizziness and visual disturbances as a result of the action of flecainide on Na channels, while headache and gastrointestinal disturbances are less frequent [48].

The gastrointestinal tract almost entirely absorbs flecainide, which has a bioavailability of 85–90% and achieves peak concentration in approximately 1–3 h [49]. Flecainide has a large volume of distribution with 40% of the drug bound to plasma proteins [49]. Therapeutic plasma levels range between 0.2 and 1.0 mg/mL, higher concentrations are associated with proarrhythmic side effects. Flecainide is metabolized by liver cytochromes CYP2D6 and CYP1A2 and then eliminated in urine [50]. The half-life is in the range of 12–27 h and may last up to 70 h in patients with heart failure, renal disease (creatinine clearance < 50 mL/min) liver disease and advanced age [44]. CYP2D6 genotype is a determinant factor of age-related decline in metabolic clearance of flecainide, resulting in a more prominent effect of the CYP2D6 genotype in the elderly [51]. Moreover, the therapeutic range of serum concentration is lower in SCN5A promoter haplotype B carriers than in the wild-type haplotype A homozygotes [52]. Concerning drug interactions, CYP2D6 inducers (carbamazepine, phenytoin, phenobarbital, primidone) increase the elimination rate of flecainide [53][54].On the other hand, CYP2D6 inhibitors as amiodarone, protease inhibitors (amprenavir, darunavir, fosamprenavir, indinavir, lopinavir, ritonavir, saquinavir, tipranavir) [55][56], selective serotonin reuptake inhibitors (citalopram, fluoxetine, paroxetine, sertraline) [57] and serotonin-norepinephrine reuptake inhibitors (duloxetine, venlafaxine) increase flecainide plasma concentration and half-life [58].

Controlled-release flecainide has a reduced and delayed maximum concentration (26 h) and fewer fluctuations in blood levels than the immediate-release form, allowing once-daily administration. The steady-state blood level is reached after 4–5 days and ranges from 0.27 to 0.33 mcg/mL, far from the blood level at risk of adverse reactions. Thus, the controlled-release form increases treatment compliance and lowers the risk of adverse events and interactions with other drugs while maintaining clinical efficacy [59].