HOXA9 (Homeobox A9) is a homeotic transcription factor known for more than two decades to be associated with leukemia. The expression of HOXA9 homeoprotein is associated with anterior–posterior patterning during embryonic development, and its expression is then abolished in most adult cells, with the exception of hematopoietic progenitor cells. The oncogenic function of HOXA9 was first assessed in human acute myeloid leukemia (AML), particularly in the mixed-phenotype associated lineage leukemia (MPAL) subtype. HOXA9 expression in AML is associated with aggressiveness and a poor prognosis. Since then, HOXA9 has been involved in other hematopoietic malignancies and an increasing number of solid tumors. Despite this, HOXA9 was for a long time not targeted to treat cancer, mainly since, as a transcription factor, it belongs to a class of protein long considered to be an “undruggable” target; however, things have now evolved.

Transcription factors represent a large class of proteins with more than 1500 members, of which 15%–20% are considered oncogenes [1][2]. They are classified into more than 70 different families based on sequence and structure homologies of their DNA-binding domains. Among them, the homeobox DNA binding domain (homeodomain, HD) family encompasses more than 250 transcription factors, themselves subdivided into 21 different sub-families, including HOX-Like, Para-HOX, NK-Like, TALE (three amino acid loop extension) containing the PBC and MEIS groups among other), POU, HNF, LIM, Paired (PRD) and PRD-like subfamilies [3][4]. Derived from Antennapedia and Bithorax ancestors, the HOX-Like subgroup corresponds to the HOX cluster genes and is the only group of HD proteins conventionally named “HOX genes.” Organized into four paralog clusters in animals, the number and identity of HOX genes varies depending on the species. In humans, 39 HOX proteins are organized from 1 to 13 (as originally defined in Drosophila) in the four paralog clusters A to D. After their spatiotemporal expression, critical for patterning of the anterior–posterior axis in embryos, HOX gene expression is largely repressed in adults but controlled reactivation allows dynamic expression in adults to lead or reactivate some cellular processes, including hematopoiesis [5][6][7][8], wound healing [9][10], vascularization, endometrial development/fertility [11][12][13][14][15] and many other processes of body repair and homeostasis [16][17][18][19][20]. In particular, HOXA9 expression is finely controlled and decreases during the progression of normal hematopoiesis [21].
A large proportion of HOX cluster genes are considered oncogenes due to their implication in translocations, mutations or improper expression dynamics in some tissues. They are associated with cancer at the initiation, development or metastasis stages and are over-expressed in cancer cells relative to normal tissue (for reviews [22][23][24][25][26][27][28][29]). As an example, the oncogenic function of HOXA cluster genes was originally well described in hematopoietic disorders. This is particularly the case of HOXA9 in acute myeloid leukemia (AML).

2. HOXA9: A Leukemic Driver in AML

The leukemogenic function of HOXA9 was first assessed in the murine model BXH-2, a mouse strain that spontaneously develops AML through endogenous retroviral integration. Indeed, Hoxa9, as well as a number of other Hox genes and its co-factor Meis1 (myeloid ecotropic viral integration site 1), are frequently over-expressed in BXH-2 murine leukemic cells [30]. It was then evidenced that transplantation of cells over-expressing murine Hoxa9 by retroviral transduction evidenced a late onset of AML, a process that was accelerated by co-transduction with Meis1 [31].
In human leukemia, the first implication of HOXA9 was highlighted by the discovery of the NUP98-HOXA9 fusion protein resulting from t(7;11)(p15;p15) translocation [30][32], a rare (1%–3%) AML subtype associated with poor prognosis [33][34]. NUP98, a nucleoporin of 98 kDa, is a chaperone protein associated with the nuclear pore. NUP98-HOXA9 binds directly to DNA on the HOXA9-cognate sequence via HOXA9 homeodomain [35]. NUP98-HOXA9 chimera seems to induce myelodysplastic syndromes for a relatively long period before transformation in AML, a period that is reduced when MEIS1 is concomitantly expressed [36]. The NUP98-HOXA9 protein would also have a higher transcriptional activity than HOXA9 itself due to its highest stability (half-life three times longer) in relation to its resistance to ubiquitinylation mediated by CUL-4A that may partly explain its oncogenic function [37].
Besides expressed as an oncogenic fused protein, the implication of structurally unmodified HOXA9 as a leukemic driver was then evidenced as part of its over-expression in leukemic cells. Indeed, the relevance of HOXA9 expression in global survival of human leukemia patients was first demonstrated on gene expression signatures relating to patient outcome: HOXA9 was evidenced as the protein presenting the highest correlation with poor prognosis in a series of nearly 7000 genes [38]. This association of the level of HOXA9 expression with prognosis was also evaluated on an independent series of patients showing that low levels of HOXA9 (but also other HOXA and HOXB) gene expression is characteristic of a favorable cytogenetic AML subgroup [39][40]. Such general analyses now take into account the better knowledge of cytogenetic and molecular characteristics of different AML sub-types and it is now well established that HOXA9 over-expression is directly associated with some of them, themselves directly identified as good, intermediate, or adverse prognosis subgroups, with a total prevalence of ~70% of AML [41][42]. The main genetic alterations associated with HOXA9 over-expression in AML are presented in Table 1.
Table 1. List of the main genetic alterations in AML that are associated with HOXA9 over-expression.
The most described HOXA9-associated leukemias are: (1) acute leukemia (either myeloid or lymphoid) bearing MLL (mixed lineage leukemia, also called KMT2A) fusions [43][68][44][69][45], known as mixed phenotype acute leukemia (MPAL), and which represent ~5% of AML and are associated with poor prognosis; and (2) AML with nucleophosmin 1 (NPM1) mutations, which represent ~55% of normal karyotype AML and ~35% of all AMLs, and are associated with poor to intermediate prognosis depending on the nature of additional alterations, such as mutations of FLT3 kinase (Fms-like tyrosine kinase 3) [61][62][63].
The AML subtype MPAL preferentially affects infants or is developed as a therapy-induced leukemia. MPAL is associated with poor prognosis with a five-year survival rate of less than 40% in infants compared to ~90% for non-MPAL [70]. The genomic breakpoints involve more than 130 different MLL translocation partners already described, with the 10 main partners representing >90% of the MLL translocations, including AF9 (~30%), AF10 (~16%), ELL (~10%), AF6 (~8%), and ENL (~6%) [71][72][73]. The major breakpoint cluster region is localized between exon 9 and intron 11 of the MLL gene in more than 80% of MPAL patients. These rearrangements generate a fusion between the N-terminal portion of the MLL protein containing its DNA binding domain and the carboxy-terminal portion of its protein partner [74]. The MLL protein will lose its SET domain and its domain for binding to ASB2, a ubiquitin ligase causing its proteolysis. Thereby, the fusion proteins generated will no more be degraded [75]. Interestingly, the main translocation partners (AF9/AF10/ENL), as well as minor partners such as AF4, are proteins that normally function within a large protein complex associated with the MLL protein (within a large complex or different sub-complexes). Translocations seem to physically fix proteins together in order to favor the stability and functionality of the MLL complex, particularly through interaction (direct or indirect) with the disruptor of telomeric silencing 1-like protein DOT1L (through direct interaction with AF10, for instance), an epigenetic partner that methylates lysine-79 residues of histone H3 proteins as a transcriptional activation mark [76][77][78], or with p-TEFb kinase (through direct interaction with AF4, for instance) that phosphorylates RNA polymerase II to allow gene transcription [79]. Among other proteins implicated in the active MLL complex are Menin [80][81], LEDGF (lens epithelium-derived growth factor) [80][82], WDR5 (WD repeat protein 5) [83], BRD4 (bromodomain-related protein 4) [84], HDAC (histone deacetylase) [85][86], KDM4C/JMJD2C (lysine-specific demethylase 4C/jumonji domain-containing protein 2C) and PRMT1 (protein arginine N-methyltransferase 1) [87] (Figure 1). 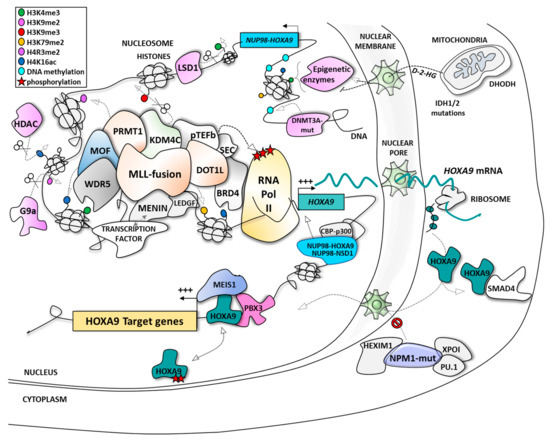 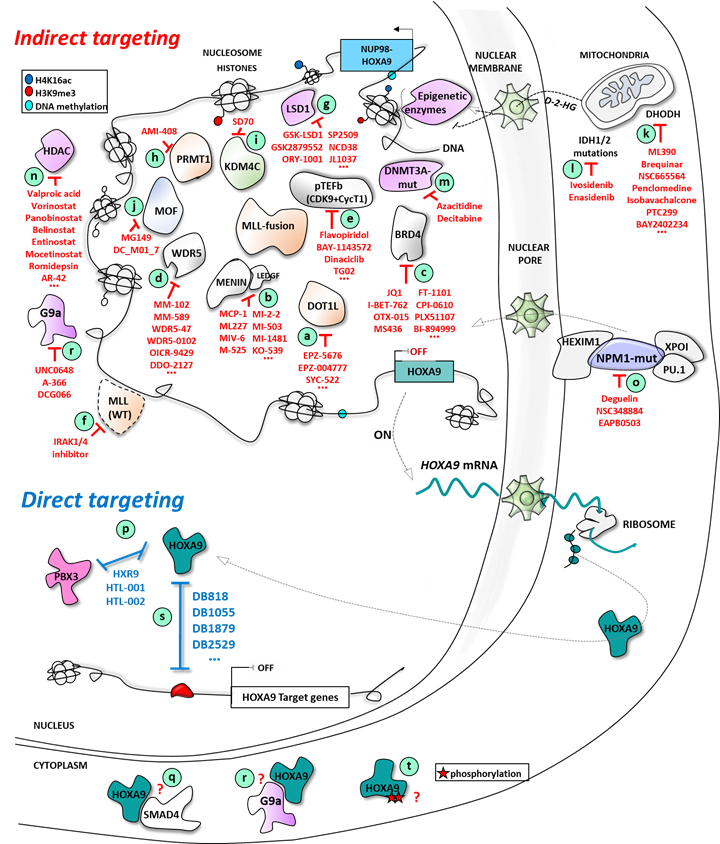