Species belonging to the genus Allium contain many organosulfur compounds (OSCs) that have been widely studied showing their biological properties and beneficial effects on intestinal health and gut microbiota (GM).

From the moment of their birth, humans are already colonised by microorganisms in the gastrointestinal tract (GT), oral cavity, vagina or skin. Gut microbiota (GM) includes the set of bacteria that colonise the GT and maintains the integrity of epithelium, establishing a physical barrier against pathogens. In addition, to ease digestion and absorption of nutrients, the GM helps metabolism by synthesis of essential nutrients [1] and also stimulates the production of antimicrobial compounds in the host. In recent years, plenty of assays have demonstrated that enteric bacteria play a fundamental role in aspects of human health such as the promotion of adaptive immunity, cognition pathologies, inflammatory bowel disease (IBD), metabolic syndrome or colorectal cancer [2][3][4][5][6][7][8]. Even host emotions and behaviour have been associated with changes in the ecology of their GM [9][10]. In fact, the gut microbiome is currently considered as an independent organ that shows both physiological and pathological effects [11][12].
The composition and development of the newborn’s GM are influenced by several aspects, including sex, the gestational age or drug use during the perinatal period [13]. Throughout the life of the individual, the symbiotic relationship of GM with the host can be commensal or mutualistic, including a range of factors affecting the composition of GM. There is evidence on the possible coevolution of the host and its autochthonous microbiota since this symbiotic association between host and microbiome could have played an important role in the process of human evolution [14][15]. The GM of mammals encompasses more than 100 billion microorganisms, including bacteria, eukaryotes cells such as certain fungi, archaeas and viruses. More than 90% of the bacteria in GM belong to the phylums Firmicutes, Bacteroidetes, Proteobacteria, Actinobacteria, Fusobacteria and Verrucomicrobia, being the two most abundant Firmicutes (F) and Bacteroidetes (B). Most of the beneficial bacteria present in GM, such as Lactobacillus and Bifidobacterium, are included in Firmicutes phylum [10][16]. Imbalances in the composition of GM, also known as dysbiosis, can be caused by DNA mutations, antibiotic therapy, inflammatory processes or the lifestyle, in particular, due to unhealthy eating habits and sedentary behaviours. During dysbiosis, some genera or species of potentially harmful bacteria increase in the GM, leading to a disease-prone condition, such as respiratory, cardiovascular, neurological or gastroenterological disorders [1][17][18]. For instance, obese people have a higher F/B ratio compared to people with normal weight, which implies that also obesity could also be related to changes in GM [19].
According to previous studies conducted in both humans and animals, changes in GM can occur rapidly, even within a few hours. These changes alter the functions of microorganisms and are usually characterized by a decrease in diversity and a higher F/B ratio [15], which may lead to chronic metabolic diseases. A well-studied case is the relationship between GM of newborns and gestational diabetes mellitus [20]. Other clinical and preclinical studies have shown that the presence of some bacteria belonging to the Proteobacteria phylum, such as Escherichia coli, Helicobacter pylori and Salmonella enterica, can be associated with colon inflammation and colorectal cancer [1]. On the contrary, there is evidence that the depletion of some species in GM, such as Faecalibacterium prausnitzii, might be related to the development of IBD [21].
Both the standard nutrient intake and severe dietary changes affect the composition and structure of GM. Diet-induced dysbiosis is a contributing factor to the development of diseases such as allergy, type 2 diabetes, cardiovascular disorders, IBD, Crohn’s disease, ulcerative colitis, irritable bowel syndrome, nonalcoholic fatty liver disease and colorectal cancer [3][22][23][24][25][26][27][28]. However, as recent studies suggest, nutritional interventions can also modify the composition of GM in a positive manner, reducing the development of pathologies associated with inflammation such as intestinal diseases, rheumatoid arthritis, asthma and acne [29][30][31].
Dietary strategies conducted with prebiotics and probiotics are able to modulate the composition and functionality of the human GM [32]. Other dietary habits, such as high consumption of fruits and vegetables, can also significantly improve the biodiversity of GM because of their high content in bioactive phytochemicals [11][33]. Phytochemicals are natural compounds produced by plants to help them to resist fungi, bacteria and plant virus infections and also to avoid their consumption by insects or other animals [34]. The most common found in foods are polyphenols, carotenoids, phytosterols, alkaloids, glucosinolates, terpenes and organosulfur compounds (OSCs) [35]. As shown in Figure 1, phytochemicals may also affect the composition and structure of GM, and consequently impact the host metabolism, inflammatory response or development of infections. 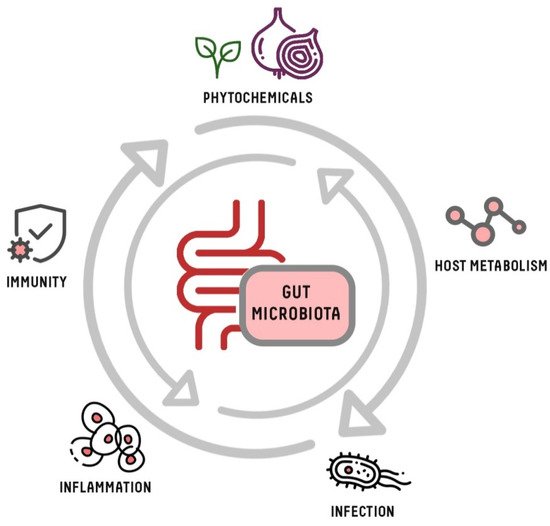 Figure 1. Interactions between host and gut microbiota. Phytochemicals influence the intestinal microbiota, which establishes mutual interactions and interdependencies with the host.
The GM plays a key role in the general health condition, having a symbiotic relationship with the host with a direct influence on numerous diseases [29][36] (Figure 1). The immune system influences the proliferation and colonisation of certain microorganisms in intestinal microbiota through the production of immunoglobulins or cytokines [37]. In addition, GM regulates host metabolism, immunity and stimulation of the central nervous system [38][39]. The microorganisms of GM transform the components of the food ingested through fermentative processes, producing metabolites that can be beneficial or harmful [18]. These metabolites, in combination with other compounds present in food, modulate the host’s immune system. Reciprocally, some components of the diet can modulate the composition and functional capacity of GM, inducing the growth of probiotic bacteria [40]. In this way, diet can severely influence immunity and the progress of a possible host infection, altering the diversity, abundance and functions of GM [11][41] (Figure 1).
In recent literature, it can be found how prebiotics, probiotics or phytochemicals influence various pathologies, thus achieving an important therapeutic strategy for the prevention and treatment of human diseases [42][43]. In particular, dietary fibre and phytochemicals can change the composition of GM, inhibiting the growth of pathogens and increasing the population of beneficial bacteria. These bacteria produce some metabolites, such as short-chain fatty acids, which further modify the intestinal environment, improving glycaemic control, lipid profile and inflammation [15][44]. Phytochemicals have been shown to be capable of modulating GM in a few days after their inclusion in carefully controlled diets [1][34]. Although several studies have reported phytochemical-induced GM alterations, much remains to be investigated on the molecular mechanisms and interactions between the gut bacteria involved [34][45]. However, some clinically controlled dietary interventions have studied the effect of these compounds on the human GM, showing a positive influence on the health of the study subjects [17]. Although the most studied phytochemicals are polyphenols, other plant-derived compounds, such as OSCs from Allium vegetables, have also shown a significant potential effect to modify the composition of bacterial communities [46][47][48][49].
The genus Allium includes more than 900 species of plants, being the most studied species Allium sativum (garlic), Allium cepa (onion), Allium ampeloprasum var. porrum (leek) and Allium ascalonicum (shallot). The therapeutic properties of these plants are widely known since time immemorial [46][47][50]. OSCs are the most important class of bioactive compounds in Alliaceae, which are synthesized during tissue damage in Allium as part of the defence mechanism against foreign aggressions. OSCs confer biological properties that are beneficial for health, such as antibacterial, antifungal, antiviral, antiprotozoal, anti-inflammatory, antidiabetic, antioxidant, antimutagenic, hepatoprotective or neuroprotective activities, among others [51][52][53][54][55][56][57]. The main OSCs in the genus Allium include the precursors S-alk(en)yl-L-cysteine sulphoxides (ACSO), whose transformation leads to thiosulfinates, thiosulfonates and sulfides in variable amounts and types. The characteristic pungent aroma of each Allium species is associated with the different levels of ACSO precursors they contain, which are primarily transformed into thiosulfinate compounds. When Allium bulbs are crushed, an enzyme called alliinase, common to all Allium species, is released from the vacuoles of cells and catalyses the cleavage of ACSO into sulfenic acid intermediates [58]. These intermediates are highly reactive and produce thiosulfinates, as shown in Figure 2. 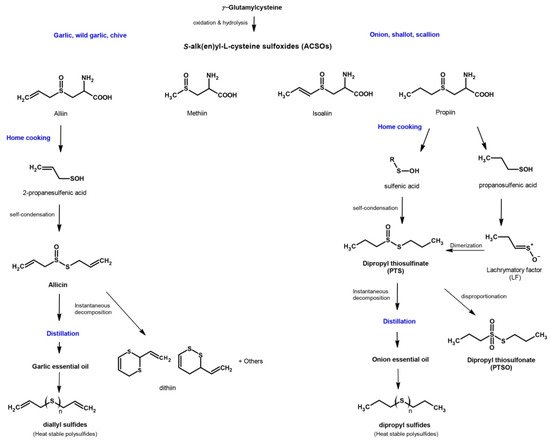 Figure 2. Route of formation of the main organosulfur compounds in garlic and onion.
Nevertheless, thiosulfinates are also highly reactive molecules and, under certain conditions, can decompose to form other sulfur compounds, including symmetric or asymmetric thiosulfonates and sulfides [55][56]. Depending on the Allium species, the pathways for the transformation of thiosulfinates and the derivatives formed may differ. In the case of garlic, alliin (S-allyl-L-cysteine sulfoxide) is the most important precursor. It is distributed into the cellular cytoplasm and, when the garlic is chopped or crushed, the contact of alliin and alliinase produces allyl sulfenic acid and dihydroalanine. Two molecules of allyl sulfenic acid are condensed, forming allicin (diallyl thiosulfinate), which is the most important OSC of the genus [55][56]. However, allicin is extremely unstable and, at room temperature, is rapidly transformed by different mechanisms in other compounds such as ajoene, dithiins or diallyl disulfide. In onion, the most common sulfur compounds are isoalliin (S-propenyl-L-cysteine sulfoxide) that changes into lachrymatory factor (Z-propanethial S-oxide); methiin (S-methyl-L-cysteine sulfoxide), also found to be present in garlic; and propiin (S-propyl-L-cysteine sulfoxide) that, due to the action of alliinase, leads to dipropyl thiosulfinate (PTS) [59]. Although PTS is more stable than allicin, it is also a labile compound that, as happens with other thiosulfinates, is transformed into dipropyl disulfide and propyl-propane thiosulfonate (PTSO) through dismutation or disproportionation reactions [55] (Figure 2).

This is the first systematic review about the benefits on the GM and intestinal health by Allium products, specifically by secondary metabolites from onion. A total of 530 publications were found from the four different electronic databases used. This number was reduced to thirteen after removing duplicate publications and the application of the inclusion/exclusion criteria established by the reviewer team. In addition, two articles were also found to be eligible from the bibliography section of the pre-selected works, and two extra articles, not identified by the electronic databases, were added as the authors were aware of their existence. Taking into account all of the aforementioned, 17 original articles were included in this systematic review to describe the current scientific evidence of the modulating effect on GM exerted by Allium products and, in particular, by OSCs from Allium cepa. These compounds showed significant antibacterial activity against a broad spectrum of enteric pathogens, both in vitro and in vivo, including antibiotic-resistant bacteria isolated from clinical specimens. Numerous in vivo assays, conducted with different animal models, reported that the intake of OSCs from onion was able to modulate the composition of GM, increasing the beneficial bacterial populations. Moreover, the effects of these compounds in murine models with colitis and obesity suggested that they could be suitable candidates for the treatment of IBD or reverse the alteration of GM caused by HFDs. Despite the evidence found in different animal models, no article has been found reporting the effects of other OSCs, apart from allicin, in clinical trials or dietary interventions in humans. In this sense, it would be interesting to conduct new research to test the benefits of these compounds in human GM.