microRNAs represent the most studied type of small ncRNAs and it has been demonstrated that miRNAs play essential roles in multiple biological contexts, including normal development and diseases. Cardiac arrhythmias are prevalent among humans across all age ranges, affecting millions of people worldwide. While cardiac arrhythmias vary widely in their clinical presentation, they possess shared complex electrophysiologic properties at cellular level that have not been fully studied.

1. The Electrical Components of the Adult Heart

Rhythmic contraction of the heart, leading to alternative systole and diastole contraction phases is controlled by the cardiac conduction system (CCS). The CCS is formed by slow and fast conduction pathways. The slow components are two distinct low conducting and self-firing nodes, the sinoatrial and the atrioventricular node, respectively. The sinoatrial node is located at the junction between the right superior caval vein entrance and the atrial chamber myocardium and is the main pacemaker of the heart [1]. The atrioventricular node is located at the top of the interventricular septum just at the junction between atrial and ventricular myocardium. The fast conducting components of the cardiac conduction system are exclusively located in the ventricular chambers, and are composed by the bundle of His, the left and right bundle branches, and the Purkinje fiber network [1].

2. Role of ncRNAs in the Cardiac Action Potential

The upstroke phase of the cardiac action potential in fast conducting cells, i.e., atrial and ventricular myocytes, is primarily modulated by the fast INa current (NaV1.5) with a smaller contribution of Nav1.8. Importantly, the function of the pore-forming Nav1.5 channel is also modulated by ancillary subunits such as Navβ1-Navβ4 (Figure 1A). SCN5A encodes the voltage-gated Na+ channel NaV1.5. Mutations in SCN5A are associated to inherited arrhythmias and cardiomyopathy [15][16][17][18]. Moreover, single-nucleotide polymorphisms (SNPs) linked to SCN5A splicing, localization, and function are also associated to sudden cardiac death [19][20]. SCN10A encodes the voltage-gated Na+ channel NaV1.8. Importantly, mutations in SCN10A have also been linked to sudden unexplained death [21], atrial fibrillation [22][23], and Brugada syndrome [20][24][25]. Furthermore, SCN5A and SCN10A share common regulatory elements that are relevant for cardiac function [26]. 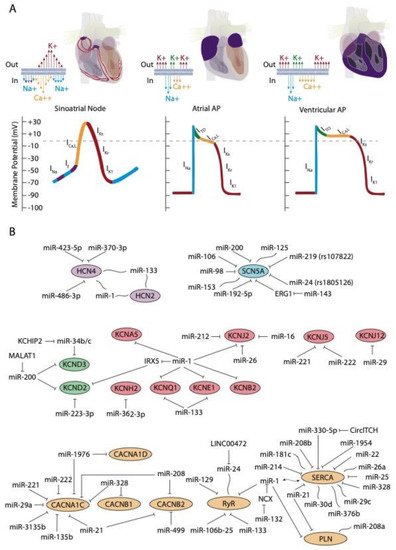 Figure 1. (A) Graphical representation of the cardiac action potential in the sinoatrial node (and also the atrioventricular node) and in contractile working myocardium of the atrial and ventricular chambers. (B) Schematic representation of the functional roles ncRNAs within the cardiac action potential regulation (— direct; 〜 indirect). Colors represent different phases of the cardiac action potential and related genes.
Similarly, the impact of microRNAs in the slow component of the INa current, governed by SCN10A pore-forming channel has not been reported in the cardiovascular context, although some evidences have been reported in other biological contexts such as pain development [27][28]. A summary of the microRNA interaction with the sodium channels is provided on Table 1, while their links to distinct cardiac diseases is provided on Table 2.
Table 1. List of microRNAs reported to modulate ion channel expression in the heart.
Table 2. List of genes involved in the cardiac action potential, their link to cardiovascular physiopathological conditions and their functional alterations in relation to distinct microRNAs signatures observed therein.
* indirect regulation.

2.2. ncRNAs in the Upstroke Phase (If Current)

The hyperpolarization-activated cyclic nucleotide-gated (HCN) channels are the structural pore-forming subunits governing this current, with four HCN isoforms known (HCN1-4), among which HCN4 is the most highly expressed in the sinoatrial and atrioventricular nodes (Figure 1A).

Indirect evidence on the role of miR-1 and miR-133 regulating HCN isoforms have been also reported. Inversed expression patterns of HCN2 and HCN4 (upregulated) and miR-1 and miR-133 (downregulated) have been reported in age-associated atrial fibrillation [38] myocardial infarction (MI) [39][40], and exercise training [41], yet it remains to be established if these microRNAs can direct target HCN isoforms (Figure 1B).

Similarly, no evidence has been reported to date on the direct functional role of microRNAs regulating HCN4 in arrhythmogenic syndromes, supporting the notion that additional studies are required in this context. A summary of the microRNA interaction with the HCN channels is provided on Table 1, while their links to distinct cardiac diseases is provided on Table 2.

3. Role of ncRNAs in Cardiac Repolarization

After cardiac depolarization, the early repolarization process is governed by cardiac transient outward potassium current (ITO). ITO is rapidly activated after a fast increase of the membrane potential, where a short-lived, hyperpolarizing outward K+ current (ITO) makes K+ ions from inside the cells to flow to the extracellular space, causing the transmembrane voltage to decrease. ITO is then quickly deactivated, stopping the repolarization and ending the first phase of the action potential [112].

Several microRNAs have been described to be involved in the regulation of these channels. In particular, in 2007, Zhao and co-workers [42], demonstrated that Kcnd2 is positively regulated by miR-1, through Irx5 inhibition in mice, thus altering the endocardial to epicardial transmural gradient controlled by Kcnd2 within the ventricular cardiomyocytes and thus resulting in ventricular repolarization abnormalities. Kcnd2 is also regulated by miR-223-3p, a microRNA that is remarkably upregulated in a rat model of acute MI and consequently, Kv4.2 protein levels and ITO density were significantly decreased [43] (Figure 1B). Such impaired modulation of Kv4.2 protein expression and thus of ITO current can cause prolongation of the action potential duration and thus promote arrhythmias.

IKur currents have been recently identified to be modulated by Kv1.5 alpha pore forming subunits, encoded by KCNA5. IKur currents are a major contributor to atrial repolarization [113][114]. Biochemical interaction between miR-1 and human KCNA5 3′UTR has been recently validated [46] yet in vivo functional consequences of miR-1/KCNA5 interactions has only been demonstrated in rat pulmonary hypertension [46] (Figure 1B). Therefore, it remains unclear the contribution ncRNAs regulating IKur in the context cardiac electrophysiology.

IKr currents are governed by hERG channels, also known as Kv11.1 [115]. As an homolog of the Drosophila “ether-a-go-go” (EAG) potassium channel, hERG was first cloned in the brain [116]. hERG channels are encoded by KCNH2 and mutations in KCNH2 have been associated to long QT syndrome (type 2; LQTS2) [87]. Ancillary MiRP1 (or KCNE2) subunits, that constitute single transmembrane protein homologous to KCNE1, was shown to associate with HERG channels and modulate IKr biophysical properties [117]. Mutations in KCNE2 have also been associated to long QT syndrome (type 6; LQTS6) [117].

Several microRNAs have been reported to modulate IK1 current in distinct biological contexts. miR-1 levels are increased in patients with coronary artery diseases (CAD) and also in an experimental rat model of MI. In this context, miR-1 silences KCNJ2 protein expression, and also GJA1, by directly targeting their 3´UTRs, respectively [51] (Figure 1B). On the contrary hand, miR-1 levels are greatly reduced in human AF as well as in AF experimental models, contributing to upregulation of Kir2.1 subunit, leading thus to increased IK1, being this upregulation of inward-rectifier currents important for AF maintenance [50][52]. Additionally, miR-16 overexpression suppress KCNJ2/Kir2.1 expression in a rat experimental model of MI [53].

4.2. The Role of ncRNAs in Calcium-Induced Calcium Release

Calcium induced calcium release (CICR) represents the mechanism by which cardiomyocytes can couple conduction and contraction. Ca2+ enter the cells through the L-type calcium channels as previously detailed, increasing intracellular Ca2+ that leads to massive delivery of Ca2+ from the sarcoplasmic reticulum (SR) by the ryanodine receptor (Ryr2). Ca2+ is then coupled to troponin, promoting contraction, and is subsequently released from the thin filaments, and re-stored into the SR by calcium ATPase SERCA2 while part of it is also exported outside the cells by the Na+-Ca2+ exchanger (NCX1). Importantly, phospholamban (Pln) regulated SERCA2 activity (Figure 1A).
Multiple evidences have demonstrated the contribution of microRNAs to Ryr2 function by directly affecting Ryr2 expression such as miR-106b-25 [66][67]. In particular, miR-106b-25 deficient mice displayed increased total Ryr2 protein expression in the atrial tissue, within normal subcellular distribution but Ca2+-spark frequency and total SR- Ca2+ leakage were increased [67]. Furthermore, miR106-25 null mice displayed atrial ectopy and were more susceptible to pace-induced AF [67]. Such effects are in part mediated by direct Ryr2 targeting by miR-106a, miR-106b, and miR-93 in mice [67].

The relevance of ion channels in governing normal heart rhythm is reflected by the increased incidence of arrhythmias if these ion channels are mutated and/or deregulated [15]. In this scenario, ncRNAs are essential in the maintenance of cardiac function. We have provided herein a state-of-the-art review of the current mechanisms regulated by non-coding RNAs that modulate Na+, K+, and Ca2+ channel expression and/or function in the cardiovascular system. Ample evidence is available on the direct functional role of microRNAs regulating all phases of the cardiac action potential, such as for example the pore-forming subunit SCN5A expression, through biochemical interaction with its 3´UTR. Importantly, mutations in the 3´UTR can alter such biochemical interactions, and thus impaired normal gene regulation, as recently demonstrated on SCN5A. Furthermore, direct biochemical evidence are also available for those K+ and Ca2 channels involved in the repolarization and resting membrane potential phases of the cardiac action potential, with the exception of the IKur current. Surprisingly, our current understanding is still very limited compared to the distinct bioinformatically predicted interactive regulatory networks (Figure 2) exemplified herein for pore forming Na+ channels but applicable to all ion channels involved in the cardiac action potential configuration. Furthermore, such plausible interactive networks revealed an intricate number of microRNAs that can simultaneously target distinct components of the repolarization phase, supporting a plausible mechanism underlying co-regulation of the distinct phases of the cardiac action potential. Therefore, increasing efforts should be made to faithfully understand the functional role of microRNAs in cardiac electrophysiology and function, since such knowledge will empower us to better understand the etiology of distinct cardiac electrophysiological defects. 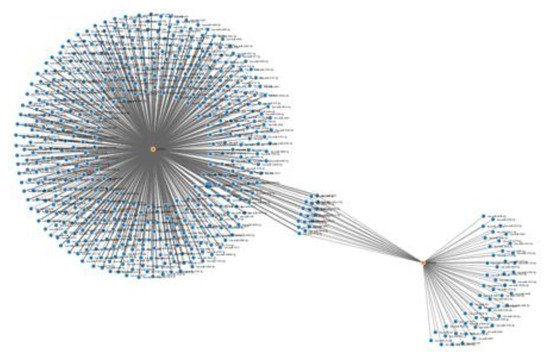 Figure 2. Plausible interactive networks of microRNA regulation on SCN5A and SCN10A as predicted using MirWalk algorithm.
On the other hand, our current understanding of the functional role of lncRNAs in cardiac action potential, and in cardiac electrophysiology at large is still incipient. Only reports on the role of MALAT1 regulating cardiac ITO current throughout the miR-200c/HMGB1 pathway [45], on LncRNA-LINC00472 acting as a miR-24 sponge and thus regulating RYR2 expression [72] and of CircITCH as a natural sponge of miR-330-5p, thereby upregulating SERCA2 [93] have been reported. Therefore, it is expected that additional evidence on the regulatory mechanisms driven by lncRNAs in cardiac electrophysiology will progressively increase in the near future.