Influenza is a zoonotic respiratory disease of major public health interest due to its pandemic potential, and a threat to animals and the human population. The influenza A virus genome consists of eight single-stranded RNA segments sequestered within a protein capsid and a lipid bilayer envelope. During host cell entry, cellular cues contribute to viral conformational changes that promote critical events such as fusion with late endosomes, capsid uncoating and viral genome release into the cytosol.

Entry of an enveloped virus from the extracellular environment into cells proceeds through a number of essential steps [1]. These include binding and attachment of a virus outer protein to its receptor at the cell surface, penetration of the viral particle into the cytoplasm, uncoating of the proteinaceous capsid allowing release of the viral nucleic acids into the cell cytosol, viral genetic material replication, protein synthesis, and finally new viral particle assembly and budding from the infected cell. The dissection of the molecular events and viral–host interactions that take place once the virus binds to the cell surface is essential for understanding how a particular virus infects cells. It also allows the identification of potential new targets for antivirals and therapies for blocking or controlling the infection and onset of diseases.

As viruses recognize target cells by first binding to cell receptors, the discovery of the virus ligands is primordial for understanding the organ tropism, the potential host diversity, and the mechanism of infection [2][3]. Enveloped animal viruses enter their host cells by membrane fusion and two pathways have been described, depending on the characteristics of the virus fusion protein. Fusion can occur at the cell plasma membrane at physiological pH [4][5][6][7][8][9][10] or within the endocytic vacuolar system where it is triggered by a low pH [11][12][13][14][15][16][17]. Virus capsid opening, the so-called uncoating, enables the virus genetic material to be released in the cytosol and get ready for replication. Our understanding of virus uncoating mechanisms has grown substantially in recent years and defines uncoating as a complex, highly orchestrated, multi-step process that relies on both viral and cellular factors.

Ubiquitin (Ub) is a small 76 amino acids protein with a molecular mass of about 8.6 kDa. It participates in multiple cellular signaling pathways, that are usually involved in the regulation of protein function and homeostasis. The ubiquitin proteasome system (UPS) forms a cellular machinery for the degradation of unwanted proteins. The aggresome processing pathway (APP) is an alternative system, whereby misfolded proteins are accumulated before being degraded by autophagy. Ubiquitination and ubiquitin-like modification is usurped by many viruses to establish infection, and IAV uses ubiquitin-enhanced viral uncoating mechanisms [18][19]. How the APP facilitates efficient IAV uncoating is described below.
Protein ubiquitination is a post-translational modification in which there is an addition of a Ub molecule to one or more sites, most frequently lysine residues of a target protein. Proteins can be monoubiquitinated or poly-monoubiquitinated if they have one or more Ub molecules, respectively. In addition, Ub monomers can be connected to each another forming chains of varying lengths, linkages, and structures.
Protein ubiquitination involves a series of cellular enzymes in cascade. As depicted in Figure 1, ubiquitination starts with the Ub-activating enzyme E1, followed by the Ub-conjugating enzyme E2 and by the Ub ligase E3, which form an isopeptide bond between the carboxyl terminus of Ub and the amino group of a lysine residue on the target protein [20]. E3 ligases determine the substrate specificity of the cascade by the covalent attachment of Ub to substrate proteins, but the E2-conjugating enzyme can also play a role in the substrate selection [21]. Ub is often linked to substrates as polymeric chains that vary in both linkage and length, with important consequences for their function [22]. 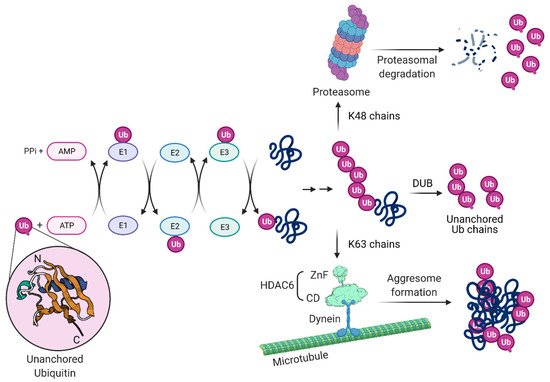 Figure 1. Protein ubiquitination, ubiquitin chains, proteasomal and aggresome-autophagy degradation. Ubiquitin (Ub) is a small, 76 amino acid protein present in all eukaryotic cells that plays a key role in the cellular defense mechanism by functioning as a proteolytic signal for the proteasome. The process of covalent Ub attachment to target proteins is called ubiquitination (also known as ubiquitylation). This post-translational modification forms by an isopeptide bond between the carboxyl terminus of Ub and a lysine residue on the target protein. First, Ub is covalently conjugated to the E1 (Ub-activating enzyme) in an active ATP-dependent reaction and transferred to the E2 (Ub-conjugating enzyme). The E3 (Ub–protein ligase) transfers the Ub from E2 to the target protein and determines the specificity. A monoubiquitinated protein can have the Ub chain elongated by E3 that creates Ub–Ub isopeptide bonds. Chain extension can happen through seven lysine (K) residues on Ub: K6, K11, K27, K29, K33, K48 and K63. Proteasomes recognize K48 chains leading to target protein degradation (upper part). Other lysine chains are involved in different biological functions. K63 chains do not specify degradation but usually facilitate the recruitment of other proteins in the formation of functional complexes involved in cellular signaling such as aggresome formation (lower part). HDAC6 can bind misfolded proteins entangled with Ub K63 chains and bridges to dynein motors, mediating transport to and formation of the aggresome compartment. Free poly-Ub chains, referred to as unanchored Ub chains, have been found in virus particles. Unanchored poly-Ub chains arise when a deubiquitinase (DUB) removes an intact chain from a protein, or they can be generated through E1/E2/E3 cycles. They can be recognized by HDAC6 and activate the aggresome pathway as well IAV capsid uncoating. Ub Protein Data Bank (PDB): 1UBI; NH2 and COOH termini are labeled N and C, respectively. HDAC6 zinc finger (ZnF) and catalytic domain (CD) PDB: 3C5K and 5G0I, respectively.
Unanchored Ub chains within the IAV structural core are exposed following virus envelope and endosome fusion at late endosomes close to the nuclear periphery [18][23]. Unanchored Ub chains can also be produced by DUBs that cleave off ubiquitin chains from substrates targeted to the proteasome. One example of such a DUB is Poh1, a proteasome-associated DUB that generates K63-linked unanchored ubiquitin [24][25]. The interaction of unanchored Ub chains with HDAC6 and the interaction of HDAC6 with motor proteins in microtubules and actin filaments generates physical forces that catalyze the dissociation of the capsid M1 layer.

3.2. The Role of HDAC6 in Influenza Virus Uncoating

Histone deacetylases (HDACs) are enzymes that catalyze the removal of acetyl groups from modified lysine residues of histone and non-histone proteins and several classes of mammalian HDACs exist [26]. Class I HDACs are 400–500 amino acids long and include HDAC1, HDAC2, HDAC3 and HDAC8. Class II HDACs are approximately 1000 amino acids long; class IIa comprises HDAC4, HDAC5, HDAC7 and HDAC9, and class IIb comprises HDAC6 and HDAC10 [27][28][29]. The class III HDACs, also known as the sirtuins (SIRT1–7), are the silent information regulator 2 (Sir2) family of proteins and have a size ranging from 300 to 750 amino acids [30][31]. Despite the name, HDAC function is not limited to histone deacetylation and the regulation of gene transcription. HDAC6 localizes mainly in the cytosol and targets proteins through one of its deacetylase domains, CD1 or CD2, or its Ub-binding zinc finger domain, ZnF. In humans, HDAC6 contains a Ser Glu-repeat domain (SE14), which acts as a cytoplasmic retention signal and mediates its stable anchorage in the cytoplasm [32] where it deacetylases tubulin [33][34][35], heat shock protein 90 (Hsp90) [36][37][38], β-catenin [39][40], cortactin [41], MYH9, Hsc70, DNAJA1 [42] or the DEAD box RNA helicase 3, X-linked (DDX3X) [43]. HDAC6 has been associated with carcinogenesis, neurodegenerative diseases and inflammatory disorders, and has been exploited as a therapeutic target for pharmacological intervention [44][45][46][47][48][49][50][51][52].

HDAC6 has also been identified to have antiviral effects which have been linked to its enzymatic activity. It was found to inhibit IAV release by downregulating the trafficking of viral components to the plasma membrane via acetylated microtubules [53]. Overexpression of HDAC6 in cells leads to diminished viral budding due to tubulin deacetylation [54].

HDAC6, through its ZnF domain, associates with unanchored Ub chains [55][56][57]. As shown in Figure 3, Ub chains can be generated through E1/E2/E3 cycles and unanchored Ub chains are present in monoubiquitin, or ubiquitin derived from proteasomal degradation or the catalytic action of DUBs on pre-existing Ub chains. HDAC6 ZnF binds Ub with high affinity by recognizing its unanchored C-terminal sequence (-RLRGG-COOH) [58][59] and can recruit misfolded proteins with entangled Ub chains.

Inflammasome complexes are formed in response to pathogen-associated molecules and, for NLR family pyrin domain-containing protein 3 (NLRP3)- and pyrin-mediated inflammasomes, their assembly and downstream functions occur at the MTOC [60]. Similar to the formation of aggresomes, HDAC6 ZnF is required for the interaction with NLRP3 and pyrin inflammasome components and transport of these proteins using the microtubule retrograde transport by dynein for their activation in macrophages [60].

The role of HDAC6 and Ub for IAV capsid uncoating can be visualized in Figure 2. 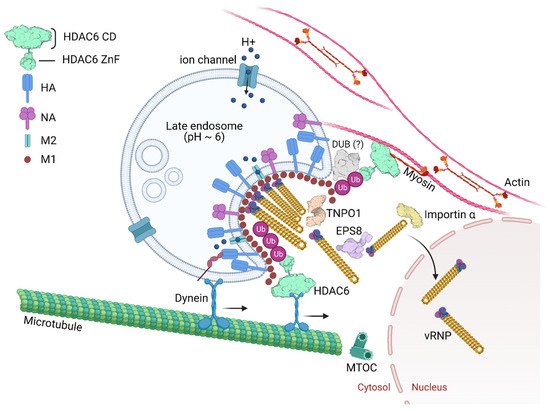 Figure 2. IAV capsid uncoating, genome release and nuclear import. Endosome acidification occurs progressively from the cell periphery toward the microtubule-organizing center (MTOC). Late endosomal acidification (pH~6) triggers change of the homotrimeric glycoprotein HA mediating fusion between the viral envelope and the endosome membrane. Influx of protons and efflux of potassium from the virus core happen through the acid-activated viral ion channel M2. The pH drop triggers the activation of a histidine cluster in the virus capsid, contributed by three sequential M1 monomers, and promotes the capsid disassembly. Further the vRNPs dissociate from the M1 proteins. Free ubiquitin (Ub) chains derived from virus particles activate the aggresome processing pathway (APP) and recruit HDAC6 through its Ub-binding zinc finger domain (HDAC6 ZnF). Deubiquitinases (DUBs) could be involved in unanchored Ub formation. HDAC6 binds to M1 and to NP from vRNPs. HDAC6 by a region between its catalytic domains also binds motor proteins in microtubules and myosin II in actin microfilaments generating physical forces that help dissociate the M1 proteins, disassembling the virus capsid. The epidermal growth factor receptor pathway substrate 8 (EPS8) and transportin-1 (TNPO1) interact with M1 from the capsid and vRNPs, contributing to the disaggregation of the vRNP-associated M1 and vRNP debundling in the cytosol. In this way, vRNPs are transported by importin α/β to the nucleus as individual rod-shaped structures. PDB: TNPO1 (2Z5J), EPS8 (2E8M), importin α (4B18), DUB (6K9P).

The epidermal growth factor receptor pathway substrate 8 (EPS8) is an adaptor protein involved in signaling via the epidermal growth factor receptor (EGFR) [61][62]. EPS8 physically associates with incoming virus components possibly through interactions with NP, the viral polymerase, M1, or bridged by other cellular uncoating factors (Figure 4). EPS8 might interact with vRNPs by binding to NP as the viral nucleoprotein specifically co-precipitated with EPS8.

Importins mediate the nuclear import of cargos and transportin 1 (TNPO1, also known as importin-β2, KPNB2) is one of the best-characterized nuclear import receptors [64].

Many viruses depend on nuclear proteins for replication and their viral genome must enter the nucleus of the host cell. This is the case of most DNA viruses and some RNA viruses, including orthomyxoviruses and retroviruses. Therefore, it is expected that the life cycle of these viruses is dependent on transporters (e.g., importins, exportins, transportins) and regulators (e.g., Ran GTPase). Great effort has been put on deciphering viral nuclear transport mechanisms [65][66][67][68]. In the context of IAV infection, a study using RNAi for targeting, among other proteins, nuclear pore proteins identified TNPO1 as an important host factor involved in uncoating. Depletion of TNPO1 in different cells reduced the number of infected cells and the production of new viruses [69]. It was shown that TNPO1 was important not only for the vRNPs nuclear import, but also for the M1 uncoating and vRNP debundling in the cytosol [69]. Moreover, the role of TNPO1 in uncoating was associated with its recognition of a nuclear localization signal as it binds to the exposed M1 N-terminal PY-NLS motif only after capsid acidification. As shown in Figure 2, by recognizing and binding the M1 NLS, TNPO1 promotes the removal of vRNP-associated M1, which leads to dissociation of vRNPs from each other and facilitates further nuclear import by importin α and β via the classical NLS-mediated import pathway.