Native hypovitaminosis D (n-hVITD) is frequently found from the early stages of chronic kidney disease (CKD) and its prevalence increases with CKD progression.

Vitamin D deficiency is considered to be an important public health problem. Despite the numerous warnings about the detrimental effects of native hypovitaminosis D (n-hVITD) in patients affected by chronic kidney disease (CKD), insufficient levels of 25(OH)VitD are still frequently found from the early stages of the disease [1]. Some evidence, mostly derived from experimental studies, have hypothesized a possible role for Vitamin D in the modulation of some physio-pathological processes beyond chronic kidney disease mineral bone disorder (CKD-MBD). Unfortunately, the lack of large and interventional studies focused on the so called “unconventional effects” (i.e., beyond CKDMBD) of 25(OH)VitD supplementation in CKD patients, does not conclusively demonstrate the beneficial effects of this supplementation in clinical practice. Conversely, the implications of n-hVITD in CKDMBD have been largely and well characterized in the literature, and for this reason in this review they will only be mentioned briefly [2].
Previously, our group addressed the impact of the supposed pleiotropic effects of 25(OH)VitD in renal transplanted patients [3].

2. Native Hypovitaminosis D during Chronic Kidney Disease (CKD): The Size of the Problem

Vitamin D is a fat soluble pre-hormone, obtained mainly through the skin photochemical conversion of 7-dehydrocholesterol after sunlight exposition (solar ultraviolet B radiation, 290–315 nm). The 7-dehydrocholesterol undergoes a temperature-dependent rearrangement to vitamin D3 (cholecalciferol) [4]. Vitamin D3 and vitamin D2 (ergocalciferol) may be supplied, in minor part, also by food intake (meat, eggs, fish, liver, cod liver oil, and dairy products).
Then, vitamin D undergoes 25-α-hydroxylation in the liver, which forms 25(OH)VitD and one subsequent additional 1-α-hydroxylation primarily in renal proximal tubular cells, responsible for the generation of the active form of vitamin D, the 1,25(OH)2VitD [5].
The generation of 1,25(OH)2VitD is also regulated by the activity of the vitamin D 24-hydroxylase (CYP24A1) in renal proximal tubules, which inactivates all the active vitamin D metabolites [6].
According to 25(OH)VitD levels, native vitamin D status is normally classified as: (1) deficiency: 25(OH)VitD < 20 ng/mL; (2) insufficiency: 21 < 25(OH)VitD < 29 ng/mL; (3) sufficiency: 25(OH)VitD > 30 ng/mL [7].
Several conditions may influence 25(OH)VitD levels in humans: aging, reduced skin synthesis, reduced dietary intake, malabsorption, obesity, glucocorticoid therapy, reduced liver function, and drugs interference with vitamin D metabolism. CKD patients present generally a higher prevalence of n-hVITD compared to the general population because of additional specific alterations of the mineral and bone metabolism present in those patients from the early stages of the disease [8][9]. In addition, the association between 25(OH)VitD urinary loss and the reduction of its renal hydroxylation further implicate the native and active hypovitaminosis D typically found in these patients. A proximal renal tubular impairment in the 25(OH)VitD megalin mediated reabsorption has been experimentally demonstrated in proteinuric and megalin knock out (KO) experimental models [10][11][12]. Recent published data, by Bohnert B et al. demonstrated clearly urinary loss of both 25(OH)VitD and 1,25(OH)2VitD and vitamin D binding protein in experimental nephrotic syndrome [13]. In addition, the low renal 1-α-hydroxylation capability, determined by the reduction of nephron mass, and the effects of phosphorus, FGF23 and αKlotho on the cytochromes CYP27B1 and CYP24A1 determine the additional decrease of 1,25(OH)2VitD [14].

The prevalence of n-hVitD in CKD has been evaluated in a monocentric American study, performed on a total of 43 CKD patients in which 86% of patients did not have sufficient 25(OH)VitD levels. Of note, 42% of them had 25(OH)VitD insufficiency, and 42% had mild 25(OH)VitD deficiency. Severe vitamin D deficiency (<5 ng/mL) was found in the remaining 2% of patients [1]. Recent data obtained in an Italian experience, including 450 prevalent CKD patients, report a mean level of 25(OH)VitD of 17.5 ± 11.2 ng/mL, and the presence of deficiency or insufficiency respectively in 66.4% and 16.5% of patients. In this cohort, the presence of diabetes mellitus was related to lower 25(OH)VitD levels. An inverse correlation between 25(OH)VitD and age, Parathormone (PTH), urinary protein excretion and Charlson index was also found, whereas a direct correlation with hemoglobin was demonstrated. In multivariate analysis only age and PTH levels impacted independently on 25(OH)VitD levels [15].
In our department, in Milan, we analyzed retrospectively 133 incident CKD stage 3–4 outpatients (males = 95; age 77 ± 11 years; eGFR-EPI 24 ± 10 mL/min). At the first evaluation, the mean levels of 25(OH)VitD were 17.5 ± 11.2 ng/mL. Not sufficient 25(OH)VitD levels, despite the native vitamin D supplementation prescribed in the 72% of patients, was found in 61% of patients, 42% had vitamin D insufficiency, and 19% had vitamin D deficiency. Interestingly, in our cohort, we did not find any difference in 25(OH)VitD according to the supplementary therapy. This result might support the evidence of the frequent inability to reach sufficient 25(OH)VitD levels in CKD patients with the simple supplementation. In this sense, a correction of life and alimentary habits can be important [16].

Despite the most important international guidelines suggesting 25(OH)VitD supplementation in presence of n-hVITD, at the moment the optimal strategy of supplementation and the optimal levels of 25(OH)VitD to reach are still debated worldwide. What KDIGO guidelines suggest, is that deficiency and insufficiency of 25(OH)VitD in CKD patients should be treated through strategies provided to the general population. No special considerations are present concerning which form of native vitamin D to use, and there is no strong evidence about a superiority in particular habits of dose and interval schedules [17]. In 2016, the Italian Society of Nephrology published, a report suggesting a supplementation in CKD patients with 25(OH)VitD < 30 ng/mL, using the scheme that nephrologists are most confident with. At the moment three different forms of native vitamin D are available: ergocalciferol, cholecalciferol and calcifediol. Among them, cholecalciferol seems to be superior in increasing 25(OH)VitD levels, with a safe dose of 10,000 UI/week [18][19]. A novel extended-release (ER) calcifediol formulation has been recently tested in 429 CKD patients. After a randomization 2 (daily pills containing oral ER calcifediol, 30 or 60 mcg):1 (placebo once daily), the cohort was followed for 26 weeks. In the sequent open label extension study, ER calcifediol was prescribed for an other 26 weeks in 298 patients. This study demonstrated a good correction of n-hVITD, a good effect on PTH, and a safe profile for oral ER calcifediol [20]. This formulation might in the future solve the problems of the adherence to the 25(OH)VitD therapy, burdened by the drop formulation and by the unusual assumption schemes prescribed [21]. Independently of the native form of vitamin D used, clinicians should pay close attention to vitamin D toxicity, avoiding too high levels of plasmatic 25(OH)VitD, and monitoring calcium and phosphorus levels. There should be particular attention during summer season, when the sunlight exposition is significantly higher [22]. According to our experience, levels of 25(OH)VitD of 30–60 ng/mL might represent a good general target in CKD population. Higher levels might be suggested to obtain effects on immunity, proteinuria etc., but unfortunately the little evidence and also the high risk of toxicity limit this suggestion. We agree with the Italian Nephrology of Society indications about the discontinuation of native vitamin D supplementation in presence of 25(OH)D levels >100 ng/mL and/or presence of hypercalcemia (Ca > 10.4 mg/dL) in the absence of active vitamin D therapy.

The principal circulating form of vitamin D is 25(OH)VitD. In the early 2000s, the presence of 1-α-hydroxylase enzyme was noted in many tissues outside the kidneys, and a certain binding affinity of 25(OH)VitD for vitamin D receptor (VDR) was demonstrated [23][24]. Almost all tissues and cells, including brain, heart, skeletal muscle, smooth muscle cells, pancreas, activated T and B lymphocytes, and monocytes express the vitamin D receptor (VDR) [25]. Consequently, much experimental evidence has implicated the hypovitaminosis D (25(OH)VitD and/or 1,25(OH)2VitD) and the reduced activation of VDR in the modulation pathological processes also beyond CKDMBD [26]. The principal effects and their level of evidence (LOE) of n-hVitD in CKD patients are summarized in Figure 1. 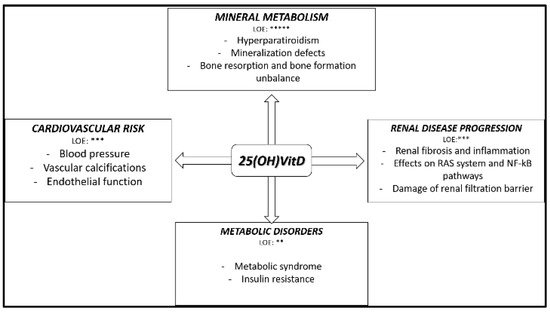