Long noncoding RNAs (lncRNAs) are the largest groups of ribonucleic acids, but, despite the increasing amount of literature data, the least understood. Given the involvement of lncRNA in basic cellular processes, especially in the regulation of transcription, the role of these noncoding molecules seems to be of great importance for the proper functioning of the organism. Studies have shown a relationship between disturbed lncRNA expression and the pathogenesis of many diseases, including cancer.

The history of lncRNA, or long noncoding RNA, dates back to the early 21st century. In 2001, two groundbreaking works were published—the first in Nature and the second in Science—which presented 96% [1] and 100% of the human genome, respectively [2]. The final sequence of the human genome was released in 2003. In what came as a surprise to the world of science, only a small percentage (1.2%) of human genetic material was found to encode proteins. The remaining ~99% are noncoding DNA, of which 24% are intron DNA and 75% are intergenic DNA [3].
In 2012, the ENCODE (Encyclopedia of DNA Elements) consortium showed that, despite only a small number of genes encoding proteins, human genetic material is 93% transcribed, of which 39% of transcripts correspond to introns and UTR sequences of protein-coding genes, 1% to exons, and 54% to noncoding genes [3]. These findings contributed to the development of interest in noncoding sequences and their transcripts, initially thought to be merely “junk DNA”.
The first long noncoding RNAs, treated at the time of discovery as mRNA, were the H19 and Xist genes. The nucleotide sequence of the H19 gene was conserved in mammalian genetic material. However, the described gene had mRNA features—being transcribed by RNA polymerase II, spliced, and located in the cytoplasm—and was initially recognized as such a molecule [3][4]. It garnered renewed interest from scientists after the discovery of another gene that does not encode a protein—the Xist gene. It is now known that the product of the H19 gene is a suppressor of tumors.
The Xist gene belongs to a gene complex in a region of the X chromosome called the XIC (X-inactivation center). This complex is involved in the process of disabling one of the X chromosomes in women (or other female mammals), thus equalizing gene expression in women and men [5]. This process was first described by geneticist Mary Lyon and is often referred to, in her honor, as Lyonization or Lyon’s law [6]. The exclusion of one of the X chromosomes in a woman’s cells occurs at random during embryogenesis [5].
The Xist gene is crucial for the proper conduct of this phenomenon. In the first stage, it is expressed on the X chromosome, intended for inactivation. The product of the Xist gene—long noncoding RNA—then flattens the “selected” X chromosome, inducing the connection of subsequent factors (e.g., PCR2 complex), which leads to a change in chromatin conformation and, as a result of repression of most genes, formation of an inactive Barr body [3][5]. This function of disabling the entire chromosome is unique in the world of lncRNA.

Long noncoding RNA are molecules with a length of more than 200 base pairs. These molecules are transcribed by RNA polymerase II, occasionally by RNA polymerase III, and also, in the plant kingdom, by RNA polymerases IV and V [3]. Many lncRNAs have a 5′ cap, which makes their RNA structure more stable, with the exception of lncRNA derived from larger molecules (such as intronic lncRNA and circRNA) [3]. Stabilization of the lncRNA structure is also influenced by polyadenylation at the 3′ end, but this only occurs in certain parts of the molecule. Some lncRNAs may occur in both forms, i.e., either with or without a polyadenylated 3′ end (known as bimorphic lncRNA) [3].
Long noncoding RNAs contain many exon regions, which allow for the creation of diverse forms of this RNA family as a result of splicing. These diverse forms may perform different functions, including those of clinical importance [3]. The stability of lncRNA molecules depends on their type.
In human cells, antisense lncRNA has been shown to be more stable than mRNA (half-lives of 3.9 vs. 3.2 h, respectively), and intronic lncRNAs have the form of both stable transcripts (with half-lives above 3 h) and unstable transcripts (t1/2 < 1 h), with an average half-life of 2.1 h [3][7].
Long noncoding RNAs, unlike mRNA, are found in the cell nuclei, cytoplasm, and mitochondria; simultaneously in the nuclei and cytoplasm; only in the nuclei; or only in the cytoplasm [8]. Thanks to this distribution, lncRNAs are able to perform a variety of functions affecting mRNA stability, translation, and cell signaling pathways.
Long noncoding RNAs are the largest group of ribonucleic acids and remain the least understood. Figure 1 presents the classification of lncRNA. 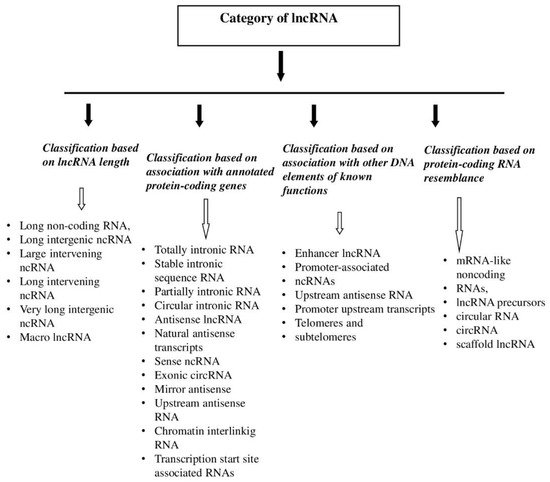 lncRNA affects the transcription process directly, acting as an enhancer, by “stopping” transcription factors, and by affecting chromatin looping and gene methylation (using epigenetic complexes such as PCR2) [9].

Trans regulation, in turn, is about controlling the expression of distant genes. Long noncoding RNAs can regulate these genes by affecting their promoters and enhancers, or via proteins associated with these regions, and, together with the attached proteins, by affecting chromatin conformation and polymerase activity [10].
Some lncRNAs are elements of complexes necessary for transcription or splicing. By facilitating the transport of these structures to the areas of the transcribed genes, they affect the structure of the cell nucleus [10]. In addition, lncRNAs bind proteins that combine with RNAs or RNA itself, e.g., microRNAs [10]. They regulate not only transcription, but also the post-transcription processes. Two of the first transfunctional lncRNAs discovered were the HOTAIR and MALAT1 transcripts, which, as further research has shown, play a significant role in the carcinogenesis process.

The characteristics of long noncoded RNA described above—such as tissue or cellular specificity and the regulation of gene expression at the transcriptional and post-transcriptional levels—indicate that lncRNAs may be important in the formation of malignant tumors. Studies have shown that lncRNAs affect the pathways of division, growth, and cell differentiation, and are also involved in cellular death processes [9][11]. Modifications to these processes may lead to carcinogenesis [11]. Moreover, some lncRNAs are regulated by oncogene products or cancer transformation suppressors, which means that they are believed to indirectly perform tumorigenic functions (Table 1) [11].

DNA damage, a specific accumulation of which is observed in cancer cells, causes activation of the transcription factor p53. This factor, depending on the degree of DNA damage, induces apoptosis or halts the cell cycle for the duration of repair. One element of the proapoptotic pathway or the suspension of cell division is an increase in lncRNA transcription through the p53 factor.
The resulting transcripts are involved in the regulation of these pathways and thus modulate responses to cellular stress [11][14][15]. On the other hand, some lncRNAs affect p53 function by interacting with the gene enhancers of this protein [16]. Finally, the MEG3 transcript—a reduced expression of which has been found in many malignancies [11]—activates factor p53 itself [14][17].
There are also many lncRNA genes in the region that, like the MYC oncogene, are translated more intensively [11]. Some of these lncRNAs regulate expression of the MYC gene in a cis manner [11]. On the other hand, expression of lncRNAs from the described region, involved in repression of the genes regulating the cell cycle according to MYC, is modified by the aforementioned proto-oncogene [11][18][19].
Studies have shown that the expression of oncogene and tumor transformation suppressors in malignant tumor tissues is increased and decreased, respectively [20].
This suggests that the interaction between lncRNAs and oncogenes or tumor suppressors is an important mechanism that contributes to the initiation of carcinogenesis. Another important mechanism seems to be the effect of lncRNAs on chromatin-modulating complexes through epigenetic changes, as an accumulation of epigenetic DNA modifications is very common in malignant tumors [21].
Long noncoding RNA can also affect cell homeostasis by post-transcriptional regulation; mRNA splicing, processing, and translation; or post-translational protein modification [11]. In addition, it has an impact on mRNA by binding microRNAs, reducing the amount of free short RNA and thereby reducing their impact on encoding transcripts [11].
The proper functioning of the cell is conditioned by the balance of metabolic processes. Studies show that lncRNAs are involved in the basic pathways of cellular metabolism, including in cancer cells, e.g., in the production of ATP under hypoxic conditions via HIF-1alpha factor or the Warburg effect [14].
A characteristic feature of malignant tumors is the ability to bypass immune control. Reports indicate that lncRNAs are involved in regulating the immune response by modifying the activity of immunocompetent cells [22]. For this reason, lncRNAs appear likely to be involved in the formation of immunomicelles of malignant tumors, even improving their defenses against the immune system [14][23].
It was mentioned above that overexpression of the HOTAIR transcript, which connects to the PCR2 complex, contributes to the formation of metastasis. Long noncoding RNAs also support the metastatic process by participating in epithelial–mesenchymal transition (EMT), as well as in signaling pathways associated with the activation of cancer stem cells [14].

Of those lncRNAs whose expression is altered in the tissues of malignant tumors, including breast cancer, some transcripts arise from so-called ultraconservative regions (UCRs). UCRs are genomic sequences that have survived evolution and are 100% compatible between the orthologous regions of humans, mice, and rats [3][24]. Of the 481 UCRs discovered, 111 coincide with sequences of genes encoding a human protein (exonic UCRs), 256 bear no resemblance to either the coding sequence or the resulting mRNA (nonexonic UCRs), and, for the remaining 114, insufficient evidence has been obtained to determine whether they are transcribed (possibly exonic UCRs) [24]. Of all known UCRs, 39% are intergenically located, 43% are found in intron sequences (including one hundred nonexonic UCRs), and 15% are in exon sequences [3]. Nonexonic UCRs, both intronic and intergenic, often form clusters near the genes of transcription factors and developmental proteins, but are also often found in so-called “gene deserts”, i.e., long, noncoding sections of DNA [25].

The importance of T-UCRs in the process of carcinogenesis also remains unknown, although they are associated with oncogenes and suppressors of tumor transformation; participate in the apoptosis, proliferation, and migration of cancer cells; and also seem to regulate microRNA functions [26][27].
Moreover, studies have shown that transcription of certain T-UCRs is induced by hypoxia [28]. Despite the lack of relevant literature, there is evidence of a changed expression of T-UCRs in malignant tumor tissues.
One of the first studies confirming the presence of a changed number, compared with healthy tissues, of numerous T-UCRs in cancerous tissues—including cancer cells of chronic lymphocytic leukemia and tissues of colorectal and hepatocellular carcinoma—was that of Calin et al., published in 2007 [25][28]. In 2010, a changed expression of T-UCRs was also discovered in neuroblastoma tissues [29].

Recent studies confirm assumptions about the great importance of both ultraconservative regions and other types of lncRNAs in pathogenesis and the course of malignant tumors, including breast cancer. The diagnostic, predictive, and even therapeutic potential of these unique molecules seems undeniable. While previously considered to be noncoding, they are in fact a matrix for the synthesis of short peptides [30]. These peptides are encoded in the sequence of short open reading frames (sORF) of lncRNA genes [31]. Recent reports indicate that these peptides play a significant role in the carcinogenesis process, providing new hope for breakthroughs in the search for effective anticancer treatment [32].