To provide the conditions for the mechanical and structural properties needed for the restored tissue and its appropriate functioning, the scaffold requires specific biochemical properties in order to ensure a correct healing process. The scaffold creates a support system and requires a suitable material that will transduce the appropriate signals for the regenerative process to take place. A scaffold composed of material that mimics natural tissue, rather than a synthetic material, will achieve better results.

Matrix proteins located in the extracellular space (ECM) form a three-dimensional network composed of polymeric macromolecules. The major macromolecules are collagen and glycoproteins, which deliver biomechanical signals to the constituting cells and provide a structural framework to the tissue. Among the different multicellular cell lineages, the ECM composition varies from providing signals for functioning in cell adhesion to regulating their differentiation. The ECM forms the tissue-niche for cell binding and regulates the stored growth factors that are released during the tissue remodeling processes. The ECM also functions as a filler in the form of polysaccharide gel or fibrous proteins within the interstitial spaces, with an additional role as a compression matrix against various stress forces. The ECM proteins consist of collagen, reticular fibers, and ground substance, of which collagen is the most common component in all animals. From lower invertebrates to mammals, collagen can appear in either a fibrillar or a non-fibrillar form. The fibrillar collagens are involved in tissue stabilization and have been identified in a variety of animal groups ranging from sponges to humans [1][2][3], while the non-fibrillar collagens are found in all tissues and are fillers in the extracellular space.

In the different cnidarian classes, collagen provides a scaffold for cellular organization and plays a role in skeleton formation and bio-mineralization processes [4][5], in nematocyst function [6] and in gametogenesis [7][8]. In Hydra, collagen features as a thin ECM in the form of a basal membrane, providing support for the cell layers [9]. Mesoglea ECM is a main component in jellyfish, located between their two cell layers and forming a collagenous 3D network [10]. Anthozoans, including among others sea anemones and corals, feature a mesoglea layer of varying thicknesses, embedded with collagen fibers that reinforce the ECM filler [11]. Among cnidarians, ECM clearly presents a variety of functions through the provision of support to tissues, as well as in structuring the acellular mesoglea located between the two epithelial cell layers [12][13][14]. In soft corals, the structure of a-sulcal six mesenteries contain collagen fibers, as demonstrated for Sarcophyton. These collagen fibers are distinctively visible in the mesogleal pockets, thus providing structural reinforcement and stiffness and maintaining the hydrostatic skeleton of the soft coral [15][16]. Among soft corals, the epidermis is separated from the gastrodermis by the mesoglea, which contains scattered collagen fibers as well as the skeletal calcite-composed sclerites [17]. Studies on soft corals and their structural features describe unique fibers, which have been examined for potential use as a scaffolding material for biomedical application.

General visualization—Collagen fibers isolated from Sarcophyton are unique in their packing as a coiled structure inside the coral tissue and which, when stretched, present a spring-like structure [15][16][18][19]. They can be mechanically extracted from the colonies and retain their natural physical properties, in contrast to collagen harvested from mammalian sources, which loses its natural structure following the procedures after their extraction from the tissues. In coral, identified long collagen fibers were identified which feature a cord-like structure with a defined coiled morphology of various pitch sizes that provides them with the ability to stretch and retract [18].
Light and fluorescence microscopy—Histological sections of the polyp-bearing part of Sarcophyton positively stained with Masson Tri-Chrome revealed a green color, indicating the presence of collagen. The mesenteries below the pharyngeal cavity of the polyp in six out of the eight radial mesenteries are thicker due to the presence of the collagen fibers and are visualized in a histology cross section Figure 1 and detailed in study [15][19]. These fibers, when extracted and visualized under fluorescence microscopy, exhibit an intrinsic auto-fluorescence, detected at a range of 305–450 nm, as is typical for collagen [18].

Figure 1. Histology cross of coral pharyngeal cavity of the polyp (A), six out of the eight radial mesenteries contain the collagen fibers (green, B) and a larger magnification of one mesentary (C).
Scanning electron microscopy (SEM)—SEM revealed the organized bundles of the collagen fibers, as well as the 3D features of the fibers (Figure 2A,B). When the fibers are pulled out, they reach up to several cm long, displaying a coiled spring-like structure with a natural micro crimping and a pitch range of 6–40 µm (Figure 2B). The diameter of an individual fiber is between 9–25 µm [15][19] and that of a bundle is up to several hundred microns. Interestingly, the diameter of an individual coral-derived fiber is much smaller compared to a fiber isolated from a rat-tail tendon, which measures in the range of 100–300 µm [20]. These soft-coral collagen fibrils’ micro crimping demonstrate unique structures [19][21]. 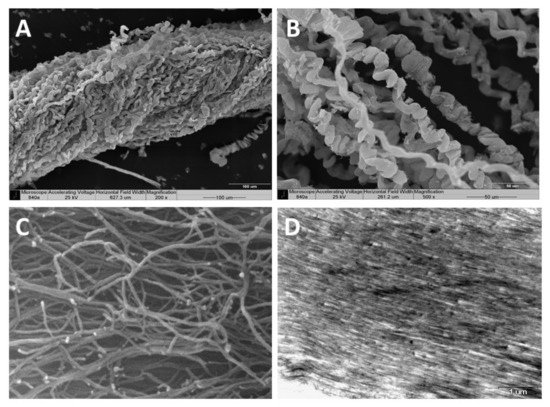 Figure 2. Scanning electron microscopy of the collagen fibers’ 3D organization (A,B). A pulled-out fiber’s coiled spring-like structure with natural micro crimping (B). Environmental scanning electron microscopy (ESEM) shows the interwoven organization of the fibrils comprising the coiled fibers and their free ends, which are either bifurcated or fused (C). Transmission electron microscopy (TEM) of sectioned fibers reveals their fine coiled structure (D).
Environmental scanning electron microscopy (ESEM)—ESEM revealed the interwoven organization of the fibrils comprising the coiled fibers and their free ends, which either are bifurcated or fused (Figure 2C). The ESEM images also revealed a fibril diameter of 25 nm [19], being smaller than the known diameter of rat-tail fibrils (10–500 nm) [22].
The defined coiled spring-like structure with natural micro crimping and either bifurcated or fused structural features underlie the hyper-elastic mechanical properties that enable the unique response of soft-coral collagen fibers as detailed below.
Transmission electron microscopy (TEM)—TEM of sectioned fibers (Figure 2D) revealed their fine coiled structure, and a parallel arrangement of fibrils with a repeated pattern of dark and light bands perpendicular to the fibril axis, similar to the well-known fibrillary collagen striation [19][21]. The mesoglea of Sarcophyton also contains short and sparse collagen fibrils located between the long fibers, as is commonly found among other cnidarians [19][21].
X-ray fiber diffraction—X-ray diffraction confirmed the structural arrangement of the soft-coral collagen fibers, showing them to possess a meridional periodicity of 66 nm and a triple helical structure, as studied in both forms of wet or dried fibers, similar to the fibers of rat-tail tendons. The X-ray analysis revealed the phases of mixed type I and type II collagen and validated the TEM results of the D-period of the collagen fibers’ structure [21]. The electron-dense profile visualized on the soft-coral fibers, as well as for vertebrate isolated fibers, is related to type I and II collagens, indicating both a strong resemblance between them, and also to helical organization of Type I. These features may derive from the unique amino acid composition or the deposition of other proteins, such as proteoglycans, on the surface of the collagen fibrils and the fibril-bundles [21].
Molecular analysis—The microstructural features of Sarcophyton fibers revealed by histology, TEM, and X-ray analysis confirmed the collagenous features of the coral fibers. Additionally, molecular confirmation was acquired by tandem mass spectrometry (MS/MS) using MALDI-TOF-TOF to determine the nature of the protein. The peptide characterization of the fibers’ organic matrices, based on amino acid sequencing, confirmed them to be collagen type I-II. The results of the Uniprot comparison indicates that the identified peptides are homologous to those of other organisms, and thus confirmed their evolutionarily conserved protein structure. Among vertebrates, 29 collagen types are recognized; for cnidarians, however, the available data are limited (https://www.ncbi.nlm.nih.gov/protein/, accessed on 25 July 2021). In invertebrates, most of the organisms subjected to molecular analysis to date have been sea anemones and jellyfish, while for others only partial sequences have been reported (in the RefSeq Protein Database, NCBI). Moreover, the majority of collagen and collagen-like proteins described for invertebrates belong to the non-fibrillary and soluble structure subtype IV, and only a few identified collagens are associated with type I. A comparison of the peptide sequences obtained for the Sarcophyton collagen by the MS/MS assay with that of the UniProt database reveals a remarkable homology of the soft-coral collagen to the fibrillary mammalian one [19][21]. The MS/MS results correspond to the results of the proton and carbon NMR amino acid analysis, which confirmed the presence of a high concentration of glycine and hydroxyl-proline in a ratio corresponding to that of a collagenous protein [15][16][21].
Differential scanning calorimetry (DSC)—Differential scanning calorimetry (DSC) conducted on the Sarcophyton fibers indicated that the collagen exhibits an unexpectedly high denaturation temperature of ~67.8 °C. In contrast, native type I and II collagens exhibit a value of 42 °C for soluble tropo-collagen, which increases to 54 °C upon fibrillation, or to 67 °C when it is glycamix cross-linked. The analysis of the soft-coral fibers determined their melting point to be 68 °C [15][16], indicating that their natural cross-linking also contributes to their exceptional mechanical properties as described below, relying on a series of previous studies [22][23][24][25]. It seems, therefore, that the soft-coral fibers indeed constitute a unique mesoglea component, featuring a structural similarity to vertebrate tendons or ligaments rather than to those of other cnidarians.

4. The Application of Marine Collagen Fibers as Scaffolding for Tissue Engineering

Tissues comprise an assembly of biomaterials that form a heterogeneous ECM suited to each type of tissue. Tissue composition is highly adapted to both biological and mechanical functions. Tissue engineering, therefore, focuses on developing a scaffold for repair that will support tissue regeneration. Consequently, the scaffold should resemble as closely as possible the properties of the native tissue. The tailor-made mechanical properties of a tissue should be carefully considered in order to meet the required tensile or compression loading forces. Collagen is the major protein that functions as a load-bearing element in tissues, in addition to its function in cell adhesion. Collagen-based biomaterials are therefore fundamental for tissue engineering purposes.
Mammalian-derived collagen has been widely used to produce scaffolds, but this requires tedious processing along with cell-removal procedures. In most cases, the fibrous macro-structure of the resultant collagen is damaged, or even destroyed, thus leading to reduced strength compared to the natural collagen. Over the years, diverse techniques for strengthening these collagen fibers and/or improving their formation have been designed in order to reproduce the complexity of the native collagen, including an intensive exploration of collagen derived from marine sources [15][16][18][19]. Efforts to produce human-derived collagen and overcome the immunological response using the biotechnology approach and in genetic engineering have used the expression of human genes in tobacco plants for the mass production of collagen; However, this is highly expensive to produce [26]. The marine-derived collagen has the advantages of a reduced immunogenic response, lower cost, and a lack of associated ethical issues involved in its application. Thus, the use of coral collagen as a biomaterial, along with other constituents to form an ECM, plays a promising role toward scaffolding production for tissue repair and regeneration. The stiffness of the coral fibers conduces to mechanical robustness [23][24][25][27] and oriented cell growth [18], while the addition of hydrogels to the biomaterial provides a soft and aqueous environment that benefits the resident cells in the recovering tissue and aids the formation of a 3D structure similar to that of the natural tissue [28][29].