Perinuclear anti-neutrophilic cytoplasmic antibodies (P-ANCA) recognize heterogeneous antigens, including myeloperoxidase (MPO), lactoferrin, elastase, cathepsin-G and bactericidal/permeability-increasing protein. Although P-ANCA have diagnostic utility in vasculitides, they may also be found in patients with various other systemic autoimmune rheumatic diseases (SARDs). Nevertheless, the clinical significance and the targets recognized by P-ANCA in such patients remain unclear. For this purpose, herein we investigated the occurrence of ANCA-related antigenic specificities in 82 P-ANCA-positive sera by multiplex ELISA, as well as their association with other autoantibodies. The P-ANCA-positive sera corresponded to patients with vasculitides (n = 24), systemic lupus erythematosus (n = 28), antiphospholipid syndrome (n = 5), Sjögren’s syndrome (n = 7), rheumatoid arthritis (n = 3), systemic scleroderma (n = 1), sarcoidosis (n = 1) and Hashimoto′s thyroiditis (n = 13). In most P-ANCA-positive patients studied (51/82, 62.3%), these autoantibodies occurred in high titers (>1:160). The analysis of P-ANCA-positive sera revealed reactivity to MPO in only 50% of patients with vasculitides, whereas it was infrequent in the other disease groups studied. Reactivity to other P-ANCA-related autoantigens was also rarely detected. Our findings support that high P-ANCA titers occur in SARD. The P-ANCA-positive staining pattern is associated with MPO specificity in vasculitides, while in other autoimmune diseases, it mostly involves unknown autoantigens.

Anti-neutrophil cytoplasmic antibodies (ANCA) are autoantibodies, mainly of IgG isotype, directed against proteins in the cytoplasmic granules of neutrophils and lysosomal proteins of monocytes. Depending on their staining pattern on alcohol-fixed neutrophils, ANCA are classified as diffuse cytoplasmic (C-ANCA), perinuclear (P-ANCA) and atypical (A-ANCA), the first two being highly significant for the diagnosis of ANCA-associated vasculitides. Myeloperoxidase (MPO) represents the major autoantigen recognized by P-ANCA, followed by neutrophil elastase, lactoferrin, cathepsin G, bactericidal/permeability-increasing protein (BPI), catalase and lysozyme, among others [1]. C-ANCA targeting proteinase-3 (PR3) has been associated with granulomatosis with polyangiitis (GPA), whereas P-ANCA targeting MPO is associated with microscopic polyangiitis (MPA). Patients with vasculitis and P-ANCA targeting MPO are most likely suffering from MPA (55–65%), followed by eosinophilic granulomatosis with polyangiitis (EGPA) (30–40%) and GPA (20–30%) [2]. Emerging evidence suggests that ANCA specificity associates with disease activity and may affect the clinical phenotype, as well as response to treatment, risk of relapse and long-term prognosis. To this end, MPA patients with MPO-ANCAs are more likely to develop isolated crescentic glomerulonephritis [3][4], pulmonary fibrosis and peripheral neuropathy [5][6], while MPO+-GPA patients have more frequently limited disease, without severe organ involvement, less need for cyclophosphamide or rituximab therapy and fewer relapses than those with proteinase-3 (PR3)-ANCA [7][8]. Interestingly, reappearance of MPO-ANCAs indicates relapse in more than 75% of patients [9].
Beyond MPA, P-ANCA have been described in a variety of other systemic autoimmune rheumatic diseases (SARDs), as well as chronic infections [10]. Indeed, MPO-ANCAs have been reported in systemic lupus erythematosus (SLE; 9.3%) [11], rheumatoid arthritis (RA; 4–18%) [12], Sjögren’s syndrome (SS; <3%) [13] and systemic sclerosis (SScl; <2.4%) [14]. Their presence has been associated with vasculitic patterns of glomerulonephritis and/or pulmonary involvement, while other P-ANCA-specific autoantigens, such as lactoferrin, neutrophil elastase, cathepsin and lysozyme, have also been described, although without known clinical significance [13][15][16]. In this context, P-ANCA and their distinct targets may have a potential role in distinguishing clinical phenotypes, disease prognosis and/or treatment monitoring. The aim of this study was to investigate the occurrence and the autoantigenic targets recognized by P-ANCA in various SARDs.

Eighty two of 550 tested patients were found to be positive for P-ANCA autoantibodies (in titer ≥1:20 dilution), 69 (84.2%) of whom fulfilled the criteria of a systemic autoimmune rheumatic disease (SARD) and 13 (15.9%) who presented with Hashimoto thyroiditis (HT). The 69 P-ANCA-positive SARD patients included 28 (40.6%) with systemic lupus erythematosus (SLE), 24 (34.8%) with a form of systemic vasculitis (18 with microscopic polyangiitis [MPA], two each with Behcet’s disease [BD] and Henoch–Schönlein purpura [HSP] and one each with aortitis and cryoglobulinemic vasculitis), 7 (10.2%) with Sjögren’s syndrome (SS), 5 (7.2%) with primary antiphospholipid syndrome (APS), 3 (4.4%) with rheumatoid arthritis (RA), and one each with systemic sclerosis (SSCL) and sarcoidosis.
The majority of SARD patients (57/69, 82.6%), as well as HT patients (11/13, 84.6%) were women. The median age at the time of P-ANCA measurement was 58 years (range: 20–85) for the SARD group and 55 years (range: 34–77) for those with HT patients. A more detailed description of patients’ characteristics per disease group is presented in Supplementary Tables S1 and S2.

As detected by IIF, the titers of P-ANCA autoantibodies in the 82 P-ANCA-positive sera ranged from 1:20 to 1:640 (median: 640, Table 1). The majority of patients with SARD who were studied (50/69, 72.5%) presented with high P-ANCA-titer, namely, ≥1:80 (in 50/69, 72.5%) or ≥1:160 (in 43/69, 62.3%). Microscopic polyangiitis patients had higher P-ANCA titers compared to SLE patients (Figure 1). Among the 18 sera of P-ANCA-positive MPA patients, 11 (61.1%) presented reactivity to MPO (MPA-P-ANCA-MPO-positive), whereas the remaining seven did not exhibit any reactivity against the various autoantigens examined (MPA-P-ANCA-NS). On the other hand, the vast majority of the patients with other SARD were not found to recognize any of the P-ANCA-related antigens under investigation, including 25/28 (89.3%) of SLE patients studied. In fact, monospecific P-ANCA-positive patient cases with anti-MPO reactivity included one each with SLE, APS, RA and systemic sclerosis, whereas one patient with SS reacted with elastase and a SLE patient with lactoferrin. In addition, a SLE patient had double specificity for MPO/lactoferrin (Table 2).
Table 1. Serum P-ANCA titers in the various P-ANCA-positive autoimmune disease patients studied.
P-ANCA: perinuclear antineutrophil cytoplasmic antibodies, MPA: microscopic polyangiitis, BD: Behcet’s disease, HSP: Henoch–Schonlein purpura, CV: cryoglobulinemic vasculitis, SLE: systemic lupus erythematosus, APS: antiphospholipid syndrome, SS: Sjögren’s syndrome, RA: rheumatoid arthritis, SSCL: systemic sclerosis. 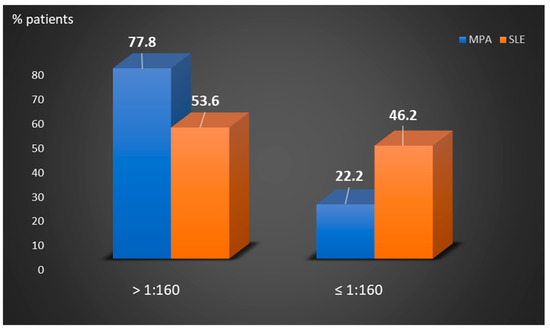 In this report, we investigated the occurrence of P-ANCA autoantibodies and their specificity in various autoimmune diseases. In accordance with previous studies [2], this study further indicates that MPO is the predominant autoantigen targeted by P-ANCA in MPA patients, whereas reactivity to other P-ANCA-related autoantigens, such as lactoferrin, may only sporadically be observed [17]. Nevertheless, our study indicates that the antigenic specificity of P-ANCA autoantibodies remains elusive in a significant proportion of such patients. On the other hand, our results support that high titers of P-ANCA autoantibodies are frequently observed in patients with systemic autoimmune diseases, other than MPA. Interestingly, despite the relatively high P-ANCA titers, the vast majority of these patient groups have unidentified specificities. In line with previous reports [4][11][12][16], the most frequently recognized antigen in P-ANCA-positive patients is MPO, whereas reactivity against other P-ANCA-related autoantigens, such as lactoferrin and elastase, were rarely observed. Importantly, P-ANCA-positive SLE and MPA patients presented with enriched autoantibody profile, implying systemic autoimmune responses against ubiquitous self-antigens. Although the number of SLE P-ANCA positive patients is small, it is noteworthy that P-ANCA positivity among these patients is associated with skin, renal and hematologic manifestations. Interestingly, the anti-MPO positive lupus patient had no renal involvement, while anti-lactoferrin specificity was linked to the most severe clinical phenotype as opposed to double anti-MPO/lactoferrin specificity relayed to a milder clinical picture. These findings imply that P-ANCA specificity may have clinical significance; however, further multicentric studies of large patient cohorts are needed to verify these observations.