Using microalgae to treat wastewater as well as simultaneously produce biofuels is one of the approaches for a sustainable future. The manufacture of biofuels from microalgae is one of the next-generation biofuel solutions that has recently received a lot of interest, as it can remove nutrients from the wastewater whilst capturing carbon dioxide from the atmosphere. The resulting biomass are employed to generate biofuels, which can run fuel cell vehicles of zero emission, power combustion engines and power plants. By cultivating microalgae in wastewater, eutrophication can be prevented, thereby enhancing the quality of the effluent. Thus, by combining wastewater treatment and biofuel production, the cost of the biofuels, as well as the environmental hazards, can be minimized, as there is a supply of free and already available nutrients and water.

From sea ice in the Arctic to microbiotic crusts in deserts, the term “algae” refers to a wide group of (mainly) autotrophic, aquatic creatures found all over the world [1][2]. Algae are usually one of two types such as macro and micro algae. Macroalgae are generally considered terrestrial plants that returned to a damp environment, according to evolutionary theory. They are classified into red, brown, and green algae and are diverse forms of multicellular eukaryotes, each with a respective evolution pathway. They have leaves and branches and may be fixed firmly [3]. Microalgae, on the other hand, are unicellular and range in size from nanometers to millimetres. Microalgae is defined by phycologists as a creature with chlorophyll and a body (thallus) that is not divided into roots, leaves (thallophytes), and stems [4]. They comprise both the prokaryotes and eukaryotes. Microalgae fix carbon dioxide more efficiently than terrestrial plants, and are widely known for capturing both atmospheric and industrial pollutants [5].
Microalgae are considered as the most successful feedstock for biodiesel synthesis due to their high photosynthetic activity, effective capture of the emitted carbon dioxide, and remarkable environmental adaptation, including high algal production [6][7][8]. Thus, algae utilize carbon dioxide, along with sunlight and water, to produce sugars through photosynthesis.
Current biofuel production from microalgal biomass is limited by a lack of dependable and cost-effective technologies for producing and harvesting algal feedstocks [9]. Muchrecent research has proposed that algal biomass production be combined with wastewater treatment and recycling to equalize the expense of fertilisers and freshwater necessary for microalgae growing [10][11][12][13]. This combination of algal biomass generation and wastewater treatment also helps to purify wastewater [14][15][16].
Algae may be harvested from the treatment facility on a regular basis and used to make biofuel. In comparison to traditional wastewater treatment technologies, simultaneous wastewater treatment and algae culture can give a more cost-effective and environmentally friendly wastewater treatment. It has been demonstrated that it is a more cost-effective method of removing biochemical oxygen demand, pathogens, phosphate, and nitrogen than activated sludge [17] (Figure 1). 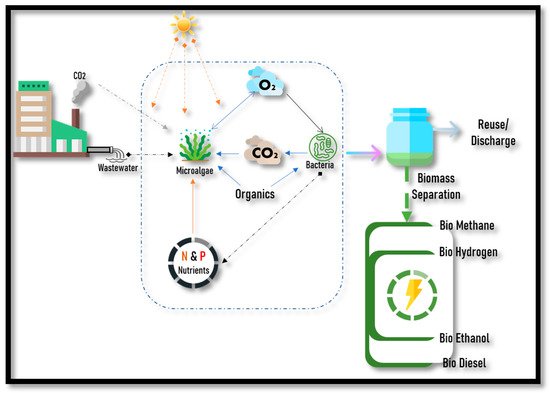 Figure 1. Microalgal wastewater treatment and the application of the produced biomass.

The triglyceride transesterification technique has been used in biodiesel production for more than 50 years [18]. During transesterification, fatty acid esters are formed when the triglycerides react with alcohol, and when the reaction is sped up by a catalyst.As the chemical processes involved in the manufacture of biodiesel are rather slow, catalysts are utilised to speed them up. Biodiesel manufacturing methods can be chemical or biotechnological, depending on the kind of catalyst used in the process. Biodiesel may be made from algal biomass in a variety of ways (including oil extraction from algal biomass) via esterification and direct transesterification of microalgae [19]. Fatty acid methyl esters (FAMEs), the chemical component of biodiesel, are usually generated in algal biodiesel processes by transesterification of algal oil with the alcohol (methanol) utilizing 98% concentrated sulfuric acid as a catalyst and n–hexane as a solvent. Extraction of oil from the microalgae without breaking their cells is a novel way in using nano catalysts for biodiesel synthesis from microalgae [20]. In situ transesterification is a promising method for avoiding oil extraction and directly converting lipids within microalgae cells to biodiesel in a single step, which might simplify biodiesel manufacturing procedures while also producing more biodiesel [21].

Biogas is one of the most promising biofuels, with the ability to alleviate some of the rising worries about fossil fuels, such as the energy calamity and change in the weather [22][23]. Application of microalgae have been shown to be efficient, practical, and cost-effective in biogas generation [24][25][26]. Microalgae are particularly well suited for combined nutrient removal through wastewater treatment and carbon dioxide sequestration, due to their ability to assimilate large amounts of carbon dioxide and the possibility of blending microalgal cultivation with flue gas emissions or biogas upgrading, which involves removing carbondioxide (as biogas) to increase methane percentage [27][28][29]. Microalgae cultivation at a wastewater treatment facility offers a free source of water and nutrients, while also contributing to the wastewater treatment process and allowing the recycling of vital nutrients that would otherwise be lost to the environment. The resulting microalgal biomass can subsequently be processed to extract nutrients for fertiliser production or oils for biodiesel generation. Biogas can also be produced through anaerobic digestion of residual biomass [30][31][32]. Biomethane is generated via biochemical conversion of biomass, followed by gas upgrading, or by thermochemical conversion of solid biomass through gasification, followed by gas cleaning, methanation as the process of synthesis, and biogas upgrading of the product.

The term “biohydrogen” refers to hydrogen created biologically, most typically by algae, bacteria, and archaea, either through cultivating them or from organic waste sources [33]. Hydrogen is considered as yet another sustainable energy source generated by photosynthetic organisms, with a higher energy content of about 122 kJ/g, which is nearly 2.75 times greater than that of hydrocarbon fuels [34]; due to this reason, it has been considered a viable alternative to fossil fuels and as an carrier of energy. A number of microalgae species, such as Anabaena sp. [35], Chlorella vulgaris [36], Nannochoropsis sp. [37], Chlamydomonas reinhardtii [38], Spirulina maxima [39], and Scenedesmus obliquus [36][40], are capable of generating molecular hydrogen through the photofermentative metabolism. Among the various species, Chlorella vulgaris is the most commonly used untreated substrate for hydrogen generation. Hydrogen yield acquired from various species ranged from 0.37 to 19 mL of hydrogen/g VS, and highest hydrogen yield was achieved from Chlorella vulgaris [41] and the Scenedesmus sp. [42].
Hydrogen can be produced inthree different ways such as direct biophotolysis, indirect biophotolysis (as shown in Figure 2), and hydrogen production driven by ATP. In direct photolysis biohydrogen is produced by converting water to hydrogen using solar energy through photosynthesis, and is further used as a substrate for anaerobic bacteria during dark fermentation [35]. Such fermentative reactions are typically faster and produce more hydrogen [43].

Figure 2. Biohydrogen Production through photolysis and fermentation.
In indirect photolysis, the microalga produces hydrogen in two steps. In step 1, carbon dioxide is captured through photosynthesis in the presence of solar light. In other terms, microalgae produce oxygen and build up carbon within the cells. In step 2, production of hydrogen takes place through the degradation of the accumulated carbon through anaerobic fermentation which occurs in the absence of oxygen and involves a series of complex biochemical events involving multi-enzyme systems [44][34]. Hydrogenase enzyme plays an important role in this method. As discussed earlier, it is more sensitive to oxygen, so various research is being carried out to develop hydrogenase enzyme which is not sensitive to oxygen. Closed Photobioreactors can be employed for indirect photolysis (Figure 3). 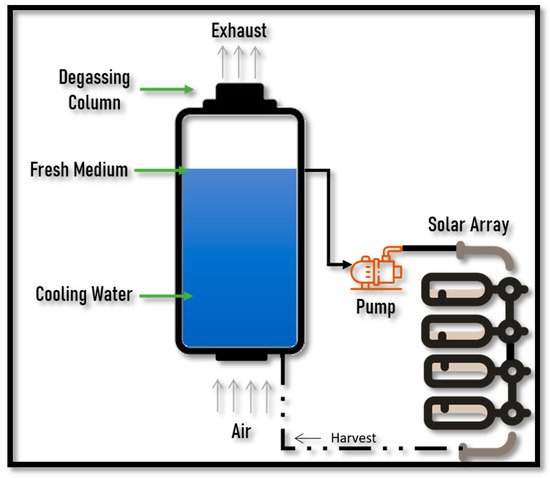 Bioethanol is considered a substitute for conventional petroleum, as they both have the same chemical and physical properties [45][46][47]. Microalgae biomass, in particular, has lately received a lot of interest as a viable renewable source for the production of biofuels. Third-generation bioethanol made from microalgae biomass could also be an environmentally beneficial fuel. As discussed earlier, microalgae are rich in lipids, enabling it to produce biodiesel. Similarly, some species of microalgae can store large amounts of carbohydrates, such as triacylglycerol and starch, within their cells. These carbohydrates can be used as a carbon source or substrate during fermentation to generate bioethanol [48][49]. Proteins can also be accumulated within the cells, along with carbohydrates and lipids under restriction of nitrogen or starvation [50]. Microalgae breakdown the complex nitrogen molecules into protein. Variation in salinity, light intensity, and temperature can also accumulate carbohydrates. Microalgae also lack lignin, and have low hemicellulose levels, making hydrolysis and fermentation yields more efficient [51].
There are three different routes to produce bioethanol from microalgae:(i) The first route is the conventional method, in which the biomass is pretreated, hydrolyzed enzymatically, and fermented using yeast [52]. (ii) The second route operates in the dark condition, and uses metabolic pathways to redirect photosynthesis to create hydrogen, acids, and ethanol [53]. (iii)The third method is to use photofermentation, which is impossible in nature [54]. (iv) The last route necessitates the use of genetic engineering to reroute microalgae′s pre-existing metabolic pathways for more subjective and efficient bioethanol synthesis. Bioethanol production from microalgae and cyanobacteria is a viable technical advancement, as they have shown to be more productive than crops such assugarcane and corn. Light is used as an energy source by genetically engineered strains to produce bioethanol from carbon dioxide and water in a single process [55].

With the rapid pace of economic development and energy consumption, as well as the limited supply of fossil fuels and the growing need for environmental protection, more attention is being paid to the development of ecologically friendly fuels such as biofuels to resolve the conflict. Microalgae-based biofuels are one of the most promising feedstocks for the next generation of biofuels due to their capacity to produce a high amount of lipids and minimum negative environmental consequence. Algal biofuels can be used in combination with a reduction in carbon dioxide in flue gas and wastewater treatment, as well as the generation of byproducts of high value. The markets for algal biofuel already exist, and are developing, but the markets’ growth is constrained due high capital and operational costs, and also due to underdeveloped production technology. Thus, the cost of algal biofuel is increasing. Therefore, more research is to be conducted to improve the technologies used to convert biomass to biofuels, and also produce better harvesting technologies to make algal based biofuels more promising.