Nicotinamide N-methyltransferase (NNMT) catalyzes the N-methylation reaction of nicotinamide, using S-adenosyl-L-methionine as the methyl donor. Enzyme overexpression has been described in many non-neoplastic diseases, as well as in a wide range of solid malignancies. This entry aims to report and discuss evidence available in scientific literature, dealing with NNMT expression and the potential involvement in main urologic neoplasms, namely, renal, bladder and prostate cancers.

NNMT is mainly expressed in the liver and belongs to phase II metabolizing enzymes [1]. Although the enzyme is described to be involved in the biotransformation and detoxification of many xenobiotics [1][2][3], porcine liver NNMT was only described to be active towards pyridine derivatives, such as quinoline, isoquinoline, and 1,2,3,4-tetrahydroisoquinoline, in addition to structural NA analogs, such as thionicotinamide and 3-acetylpyridine [4]. The resolution of tridimensional (3D) structures of purified human recombinant NNMT, together with the detection of the main amino acid residues involved in the catalysis [5], led to the discovery of the kinetic mechanism of NNMT [6], the identification of alternate enzyme substrates [7][8][9], as well as the design and assay of a great number of inhibitors [10][11][12][13][14][15][16][17][18][19][20][21].

NNMT upregulation, as well as its involvement, has been described for several non-neoplastic disorders, such as Parkinson’s disease [22][23][24][25], metabolic disfunctions [26][27][28][29], chronic obstructive pulmonary disease [30][31], atherosclerosis [32] and pulmonary arterial hypertension [33].

The aim of this review was to give an update on data concerning NNMT expression levels in urologic malignancies, such as renal, bladder and prostate cancer, as well as to report evidence showing enzyme contributions in malignant transformations featuring these neoplasms, and the role played by NNMT in tumor cell metabolism and phenotypes.

Among urological neoplasms, renal cell carcinoma (RCC) was the first to be examined in regard to potential NNMT involvement, in which enzyme overexpression was described.

Although several studies described NNMT upregulation in RCC, the molecular events leading to enzyme overexpression, as well as the effect induced by such dysregulation in cancer cell phenotype, remain partly understood. In the last decade, a few studies have been carried out in order to elucidate these aspects.

Most of the studies devoted to elucidating NNMT contributions to the malignant transformation of kidney cells, by promoting proliferation, migration, invasiveness and resistance to therapy, had been carried out on primary (769-P and 786-O) and metastatic (Caki-1) ccRCC cell lines, as well as in primary (Caki-2) pRCC cells.

Caki-1 treatment with a sulfonamide analogue of alkaloid cryptopleurine led to a significant reduction in proliferation and cell cycle progression, as well as to NNMT downregulation. Interestingly, antiproliferative activity and cell cycle arrest exerted by this pharmacological treatment were inhibited or abolished upon siRNA-mediated NNMT silencing. Further analyses demonstrated that NNMT knockdown was associated with decreased levels of phosphorylated c-Jun, whose accumulation is responsible for G0/G1 cell cycle arrest. This evidence seems to suggest a potential involvement of NNMT in molecular events connected with the antiproliferative and cell cycle-regulating effects induced by Caki-1 cell treatment with a methanesulfonamide analogue of cryptopleurine [79].

In the context of studies aiming to disclose the potential involvement of NNMT in urothelial neoplasms, array analyses were used to profile the expression of tumor and normal-looking tissue samples obtained from patients affected with bladder cancer (BC) [80][81].

NNMT levels were also detected in exfoliated cells collected from urine samples obtained from BC patients and healthy subjects. The data reported showed that enzyme expression was significantly higher in the urine of patients suffering from BC compared with that detected in control specimens. Subsequent statistical analyses revealed a significant inverse correlation between tumor NNMT levels and histological grade. Moreover, ROC analysis, as well as AUC evaluation, demonstrated the excellent diagnostic accuracy of a potential urine-based NNMT test. Such evidence strongly indicates that NNMT level determination could be used for early and non-invasive BC detection [82].

The pivotal study, that started to elucidate the role of NNMT in bladder cancer cells, used the cDNA array technique to profile the expression of stress-related and DNA repair genes in both radioresistant MGH-U1 BC cell line and its radiosensitive subclone S40b. Among dysregulated genes, the NNMT displayed marked decreased levels in S40b with respect to those detected in MGH-U1 cells. This result, further confirmed by Real-Time PCR assay, represented the first evidence suggesting a potential role played by the enzyme in cell responses to radiation treatment [83].

Wu et al. were the first to report NNMT involvement in BC cell metabolism, focusing on events featuring cell migration. The goal of this in vitro study was to detect genes promoting invasion and metastasis. To this aim, numerous human BC cell lines were both subjected to radial migration assay and then microarray-profiled. NNMT was identified among genes whose expression was directly correlated with cell migration rate, and therefore selected for further investigation. Data obtained from analyses carried out in BC tissue samples revealed that enzyme expression was also positively associated with the tumor stage, and was found to be higher in muscle-invasive forms compared with that of superficial neoplasms. Given these results, further in vitro experiments were performed in order to speculate the potential mechanistic role of NNMT in cell migration. Interestingly, siRNA-mediated enzyme downregulation significantly reduced cell proliferation, as well as chemotaxis and chemokinesis in the 253J human BC cell line [84].

To the best of our knowledge, this is the first review reporting the concerns regarding the role played by NNMT in urological tumors, focusing on enzyme expression levels in tissues and body fluids, as well as its involvement in molecular and cellular events promoting malignant transformation.

For almost twenty years, NNMT has been described to be upregulated in several solid cancers, participating in crucial mechanisms leading to cancer progression, metastasis and resistance to chemo- and radiotherapy.

Concerning urologic malignancies, enzyme overexpression emerged in renal, bladder and prostate cancers. In these neoplasms, NNMT seems to act as an interesting diagnostic biomarker, whose measurement might even be suitable for non-invasive and early cancer detection. Moreover, the prognostic potential of NNMT level determination was also demonstrated, with enzyme intratumor expression significantly correlated with important parameters, such as tumor stage, size, grade, as well as with patient survival. Subsequent studies clearly demonstrated NNMT involvement in fundamental events featuring tumorigenesis, namely, cell proliferation, migration and invasiveness (Figure 1), thus attributing to the enzyme a promising role as a molecular target for effective treatment of these tumors. NNMT 3D structure resolution [5], together with the identification of related kinetic mechanism-of-action [6], have triggered the design, synthesis and validation of a wide range of molecules that seem to act as potent inhibitors of enzyme activity [10][11][12][13][14][15][16][17][18][19][20][21], that could be used as novel anti-cancer therapeutics. 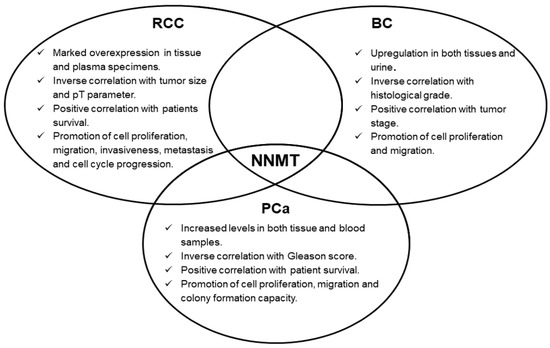 In addition to this, recent studies showed that the enrichment of tumor cell lines with CSCs was significantly associated with the enhanced expression of NNMT [70][72]. Acquisition of stem-like phenotype by cancer cells was demonstrated to have detrimental effects in terms of tumor aggressiveness and its resistance to therapy, thus leading to the relapse of neoplasm and metastatic spread [85]. In the light of these considerations and based on data reported in this review, it is conceivable to hypothesize NNMT involvement in those molecular processes and cellular events featuring poor clinical outcomes of urological malignancies. Once again, targeting NNMT could represent a powerful molecular strategy to effectively treat cancer.