The production of pancreatic β cells is the most challenging step for curing diabetes using next-generation treatments. Adult pancreatic endocrine cells are thought to be maintained by the self-duplication of differentiated cells, and pancreatic endocrine neogenesis can only be observed when the tissue is severely damaged. Experimentally, this can be performed using a method named partial duct ligation (PDL). We performed PDL on neurogenin3 (Ngn3)-GFP transgenic mice to determine the origin of endocrine precursor cells and evaluate their potential to differentiate into multiple cell types. Ngn3-expressing cells, which were marked with GFP, appeared after PDL operation. Because some GFP-positive cells were found proximally to the duct, we hypothesized that Ngn3-positive cells arise from the pancreatic duct. Therefore, we next developed an in vitro pancreatic duct culture system using Ngn3-GFP mice and examined whether Ngn3-positive cells emerge from this duct. Our results demonstrate that in adult mice, Ngn3-positive endocrine precursor cells arise from the pancreatic ducts both in vivo and in vitro experiments indicating that the pancreatic duct could be a potential donor for therapeutic use.

The pancreas is an organ that serves two vital roles, exocrine and endocrine functions, which help digestion and regulate blood glucose, respectively. The exocrine part comprises acinar cells and a ductal system that secretes digestive enzymes and drains into the duodenum. The endocrine compartment of the pancreas consists of islets of Langerhans, which are composed of five types of endocrine cells: α cells, β cells, δ cells, ε cells, and PP cells. These cells secrete glucagon, insulin, somatostatin, ghrelin, and pancreatic polypeptide, respectively [1]. A deficiency in β cells results in diabetes mellitus, for which effective curative treatment has not been established. One promising therapy is transplantation of endocrine cells as a substitute for islet cells. However, the generation of β cells either from embryonic stem cells or induced pluripotent stem cells remains challenging because the culture conditions for terminal differentiation have not been well-established [2].
To find other sources of pancreatic stem cells with the potential to become functional β cells, researchers searched for adult stem cells in the adult pancreas [3]. However, the β-cell turnover rate is slow, and pancreatic regeneration can only be observed when the tissue is severely damaged [4]. In contrast, β cells dynamically repopulate in response to systemic increases in insulin during aging [5], pregnancy [6], obesity [7], and genetic insulin resistance [8], but the origin of these newly produced β cells is controversial. One group showed that pre-existing β cells are the major source of new β cells during adult life [4][9]. The other group suggested that β cells form in the adult by transdifferentiation of pancreatic acinar tissues [10]. Furthermore, another group showed that β cells can be generated from endogenous progenitors present in pancreatic ducts [11]. The mechanisms leading to replacement of the endogenous β-cell pool have been studied using chemical [12][13][14], genetic [15], and surgical methods such as partial pancreatomy [16] and partial duct ligation (PDL) [17].
PDL is a suitable model for mimicking human conditions that promote neoplasia; wide use of this model has provided novel insights into β cell formation. However, the outcomes of PDL appear to vary between laboratories, and some groups showed that PDL operation leads to a large increase in the β cell mass [11][15][17][18][19][20][21], whereas other groups failed to detect new β cells arising from the PDL pancreas [22][23][24]. The discrepancy in these results is attributed to the success rate of the operation, as performing PDL is difficult. To overcome this problem, we established a new technique for PDL using a simple imaging approach [25]. We examined whether endocrine progenitor cells emerge from the pancreatic duct after PDL by introducing neurogenin3 (Ngn3)-GFP mice [26], as Ngn3 is a well-established marker of endocrine progenitor cells [27]. By tracing the GFP expression after a PDL treatment, we hypothesized that regenerating ductal cells could give rise to endocrine cell lineages. To examine this hypothesis, we introduced a ductal organoid culture system to examine whether Ngn3-positive cells emerge accompanied by endocrine markers as described by Huch et al. in 2013 [19].

2. Observation of Ngn3-Positive Cells in the Ligated Part of the Pancreas at 3, 5, 6, and 21 Days after Surgery

First, we performed PDL at the tail region of the pancreas in Ngn3-GFP mice. Ngn3-positive endocrine precursor cells, marked by GFP, were first observed in the ligated pancreas 3 days after PDL surgery (day 3, Figure 1B). GFP signals were also found in the tissues on days 5, 6, and 21 (Figure 1C–F), although we did not detect any GFP signals in the sham-operated pancreas (Figure 1A). GFP signals were observed outside of the lining of CK19-positive pancreatic ductal cells (Figure 1B–E). Moreover, we observed some GFP-positive cells in CK19-positive pancreatic ductal cells (Figure 1D, arrows). To examine whether Ngn3-positive cells express a definitive marker for islet hormones, we performed immunohistochemistry analysis but did not detect hormones such as insulin, glucagon, or somatostatin in Ngn3-positive cells on day 6 (data not shown). 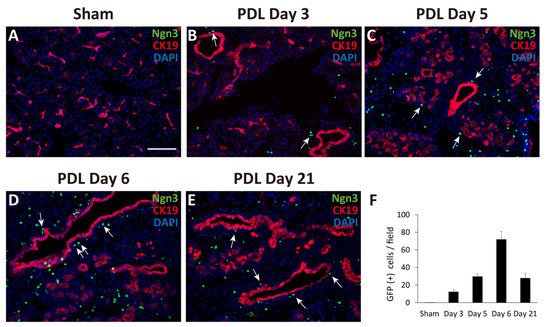 Figure 1. Monitoring GFP expression in pancreatic sections after partial duct ligation (PDL) using Ngn3-GFP transgenic mice. The tail region of the pancreas was ligated and examined for GFP expression using anti-GFP antibodies (green). Pancreatic ducts were identified using anti-CK19 antibodies (red). GFP expression was not detected in the sham-operated tail region of the pancreas (A). GFP signals appeared at around day 3 and gradually increased until day 6 after PDL surgery (B–E). The average number of GFP-positive cells in one micrograph is shown as a bar graph (F, n = 3). Ngn3-positive cells were often detected proximal to CK19-positive ducts after PDL surgery (arrows) (bar: 100 µm).

Because we observed temporal expansion of Ngn3-GFP-positive cells after PDL from the proximal region of CK19-positive ducts, we hypothesized that GFP-positive cells arose from the pancreatic ducts. To clarify the emergence of endocrine progenitor cells from pancreatic ducts, we generated pancreatic ductal organoids from Ngn3-GFP transgenic mice. We first observed cell proliferation around the edge of the duct on day 2 of culture, and continuous expansion of the organoid was observed (Figure 2A–D). On day 4, we performed immunostaining of the organoids with CK19 antibodies and found that most organoids expressed CK19 (Figure 2E,F). In contrast, amylase, a marker of acinar cells, was not observed (Figure 2G), nor were insulin, glucagon, or somatostatin. 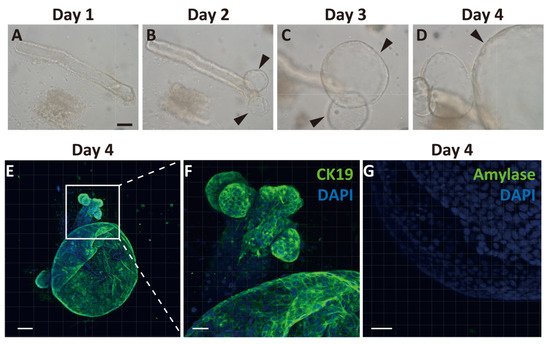 Figure 2. Generation and characterization of ductal organoid from the pancreas. Pancreatic ducts were dissected from the pancreas and embedded in Matrigel covered with organoid media to start organoid culture (A). After 2 days, the sheared end of the duct started proliferating and then formed organoids (B–D, arrowheads). Immunohistochemical analysis of organoids after 4 days of culture. All cells within the organoids expressed cytokeratin 19 (CK19), a selective ductal marker (E,F). An acinar cell-specific marker, amylase, was not detected on day 4 (G). (bars: A–D, 500 µm; E, 100 µm; F, 50 µm; G, 30 µm).
Next, we examined whether Ngn3-GFP-positive cells were present in the ductal organoids. We detected no GFP signal before day 5 in the organoid cultures (Figure 3A). GFP signals were first observed in the organoids at around days 7–9 (Figure 3B). The number of GFP-positive cells increased within the same organoid up to day 11 (Figure 3B–D).

To clarify the properties of Ngn3-expressing organoids, we extracted total RNA on day 11 of organoid culture as described in the Materials and Methods. RNA-Seq was performed to compare gene expression between organoids that expressed GFP signals and those that did not (Figure 4A). We confirmed that organoids showing a GFP signal predominantly expressed higher mRNA levels of Ngn3, demonstrating the reliability of the data (Figure 4B). The expression of transcription factors such as NeuroD1 and Isl1 was elevated in Ngn3-expressing organoids compared to organoids that did not express Ngn3 (Figure 4C,D). We observed no significant increase in the gene expression of glucagon (Gcg) but detected Gcg expression in both the Ngn3(-) and Ngn3(+) fractions (Figure 4E). The expression of endocrine cell markers, such as Sst, Ghrl, and Chga, was significantly elevated in the Ngn3(+) fraction (Figure 4F–H, q < 0.05). Interestingly, the expression of molecules involved in taste information transmission, such as Trpm5, Gnat3, and Pou2f3, was also significantly elevated (Figure 4I–K, q < 0.05). To confirm the RNA-seq results, we performed RT-PCR with specific primers for each analyzed gene (Figure 4L). These results showed that pancreatic-duct-derived cells can differentiate into both the enteroendocrine and tuft cell lineages. 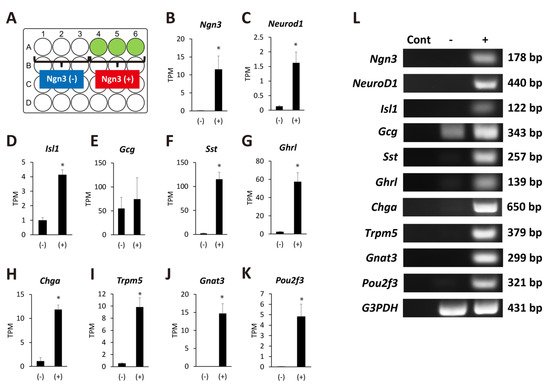 Figure 4. Ngn3-GFP-positive organoids show the potential to differentiate into several lineages. (A) Schematic presentation of the wells with or without organoids expressing GFP. Organoids were defined as Ngn3(+) if GFP-positive cells were observed on day 11. In contrast, organoids without GFP signal were defined as Ngn3(−). (B–K) Transcriptome analysis was performed with total RNAs extracted from day 11 organoids that expressed either Ngn3(−) and Ngn3(+) cells. Ngn3, NeuroD, and Isl1, key regulators of the endocrine lineage; mature endocrine markers Sst, Ghrl, and Ghga; and taste-related genes Trpm5, Gnat3, and Pou2f3, were significantly expressed in Ngn3-GFP-expressing organoids (n = 3, * q < 0.05). The gene Gcg, encoding GLP-1 and GLP-2, was expressed in both Ngn3(−) and Ngn3(+) cells (E). Results of RNA-Seq analysis were confirmed by RT-PCR (L). Cont, negative control without cDNA.

Through our data, we showed that pancreatic duct cells have the potential to dedifferentiate to become Ngn3-expressing endocrine progenitor cells (Figure 5), although it should be further examined whether the phenomenon that we observed was through stem cells or direct conversion from duct cells to Ngn3-positive cells. There have been several hypotheses regarding the existence and location of adult stem- or progenitor-like cells that can give rise to functional β cells. Cell ablation methods using chemical [12][13][14], genetic [15], and surgical techniques [16][17] have been used to test the regeneration activity of the adult mouse pancreas, which is capable of yielding new insulin-producing β cells. Although the PDL technique is widely used to induce pancreatic regeneration, in β-cell neogenesis followed by PDL, the origin of β cells remains controversial. Our newly established PDL method that can easily visualize the pancreatic duct helped us to avoid simultaneous ligation of blood vessels or nerve fibers, thus increased the reliability of PDL operation [25][28]. PDL on Ngn3-GFP transgenic mice using this method revealed that GFP-positive cells often emerged proximal to the reorganizing ducts. Therefore, we hypothesized that Ngn3-positive cells arise, at least in part, from the pancreatic duct when the pancreas is damaged. As most Ngn3-positive cells did not overlap with the pancreatic duct, we predicted that Ngn3-positive cells can only convert into endocrine cells after they move out of the pancreatic duct. This idea was previously suggested by Shih et al., who showed that ductal markers and Ngn3 expression are almost exclusive [29]. Further studies are needed to determine whether Ngn3-positive cells arise from pancreatic stem cells or from the dedifferentiation of functional cells in the pancreas. Several reports support the idea of acinar-to-ductal transdifferentiation, proposing that acinar cells also have plasticity [30][31][32][33]. Our data, both in vivo and in vitro, show that Ngn3-positive cells can be produced from pancreatic ductal cells; however, our results do not exclude the possibility of acinar-to-ductal transdifferentiation. 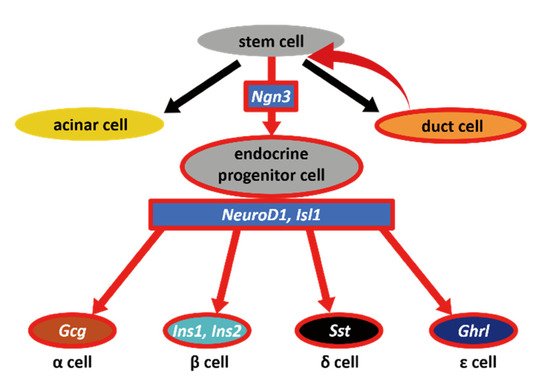 Figure 5. Schematic diagram of our hypothesis. In vivo and in vitro results indicated that dedifferentiation occurs in the pancreatic duct when ducts are severely injured. As a result, Ngn3-positive cells emerge from pancreatic stem cells; these stem cells have the potential to become mature endocrine cells, acinar cells, as well as duct cells.