Chromosomal translocations are a physiologic mechanism of DNA recombination in germline cells and in lymphocyte development. Although these mechanisms have been studied for several decades, they are still not fully understood. Chromosomal translocations are common in cancers and more frequently occur between neighboring chromosomal regions [1][2]. As a result, some translocations lead to the formation of oncogenic fusion proteins or to the activation of oncogenes by the altered regulatory regions [3][4]. Ribosomal DNA (rDNA) genes are the most fragile regions in the human genome and possess nine hot spots of DSBs, each of which is about 50–100 bp in length and are denoted “Pleiades” [5][6]. Additionally, it was demonstrated by the 4C (circular chromosome conformation capture) approach that rDNA clusters shape contacts with different chromosomal regions and are involved in the epigenetic regulation of genes that are highly associated with differentiation and cancer [7]. Interestingly, rDNA-contacting sites often possess hot spots of DSBs. rDNA clusters also make frequent contacts with pericentromeric regions and regions possessing stretches of 5–50 kb that contain H3K27ac marks [5]. Therefore, Pleiades may be responsible for Robertsonian translocations, in which rDNA-containing chromosomes are necessarily involved via their broken pericentromeric regions [5]. These data indicate that rDNA genes are a candidate for mediating chromosomal translocations in normal and cancer cells. Here, we investigated whether rDNA genes are involved in chromosomal translocations by searching for rDNA-mediated translocations in normal T cells and in natural killer (NK)-cell lymphomas from the same individuals.
Natural killer cells play an important role in the innate immune system that controls several types of tumors and infections [8]. NK cells, along with B and T lymphocytes, belong to a group of innate lymphoid cells that differentiate from a common lymphoid progenitor. NK cells are closely related to T cells and can lyse target cells without prior sensitization.
Active rDNA clusters are involved in translocations in both types of cells, particularly in regions with actively transcribed genes, but the spectra of the target genes in these cell types differ. The same rDNA-mediated hot spots of translocations are found in normal and cancer cells corresponding to the hot spots of inter-chromosomal contacts of nucleoli within specific genomic regions.

Translocations occur between closely located broken chromosomes. The critical distance between chromosomal regions essential for translocation is not known, but the fact that inter-chromosomal rDNA contacts, which were mapped at a resolution of ±2.5 kb [5], are involved in translocations suggests that this space is enough for a translocation event. Many different factors are also important for translocations: the frequencies of simultaneous DNA breakage in the contacting chromosomal regions, the accessibility of DNA sequences at both sites, and the dynamics of chromosomal contacts. We observed a good correlation between translocation frequencies for all nine hot spots of DSBs in rDNA units (R1–R9) in the normal and cancer cells, although the frequencies between different hot spots vary over a wide range. The data support the view that local chromosomal states are important for translocations. The dynamics of contacts are compartment-dependent and should be different for A and B compartments that correspond to active chromatin and silent chromatin, respectively [9]. Compartmentalization states that are formed by phase-separation mechanisms shaped by the attraction between chromatin domains of a similar state have differences in their chromatin interaction stabilities, as measured by the liquid chromatin Hi-C [10]. Pleiades are detected only in the active rDNA units, as far as the major γ-H2AX foci and UBF-1 binding sites are co-localized in interphase nuclei [6]. It follows that rDNA-mediated translocations should be enriched in open chromatin regions where active condensates are formed. The fact that DUX4 genes, which are silenced and form frequent contacts with rDNA [11][12], are not involved in rDNA-mediated translocations in either T cells or NK-cell lymphomas support this supposition.
Recently, an unexpected diversity of NK cells with distinct transcriptomes was described, including a population of NK cells associated with the expression of rDNA [13]. The data are consistent with the regulatory role of nucleoli in the global regulation of gene expression. Previous results suggested that phase-separation mechanisms are involved in the inter-chromosomal interactions of rDNA units [12]. Growing evidence suggests the role of rDNA units in the global regulation of genes controlling development and differentiation [5][7][14][15][16]. We suppose that nucleoli contacts will be detected not only at the conserved multiple rDNA-contacting sites detected in different cell lines (Figure 3) but also in the regions of detected translocations in T and NK cells. The differences in the translocation sites in these cell types may depend on the patterns of genes that shape the contacts with the nucleoli during differentiation. 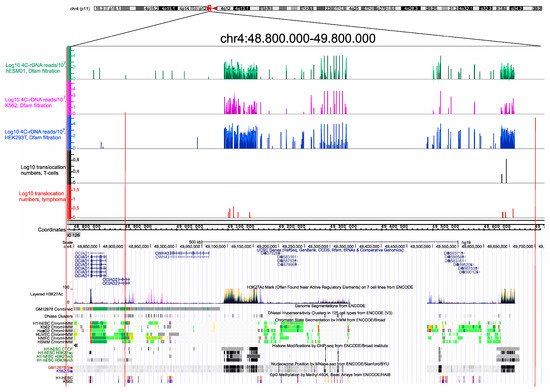 It was predicted that the DSB hot spots in rDNA repeats that shape frequent inter-chromosomal contact with genes controlling differentiation and development could lead to translocations that give rise to cancer transformation. Analysis of normal T cells and NK-cell lymphomas from the same individuals showed that there are rDNA-mediated translocations in both cell types. However, the translocations in normal cells and tumor cells affect different set of genes that control development.