Colorectal cancer (CRC) is the third most common cancer type, only behind breast cancer and lung cancer in females and prostate cancer and lung cancer in males. CRC is also a leading cause of cancer-related deaths globally. The liver is of anatomical and physiological importance in regard to the natural course of CRC. The liver and lung are the commonest sites for CRC metastasis to occur. The liver’s predominant blood supply arises from the confluence of the GI tract supplying blood vessels via the hepatic portal vein; this circulation aids the transference of the colorectal cancer cells to the hepatic parenchyma, migrating and forming colorectal metastases in the liver. The overall prognosis and survival of patients with CRLM are poor, and most patients initially are unable to undergo surgery.
The management of colorectal metastases of the liver varies on CRC disease burden, patient suitability, clinical correlation and appropriateness of treatments decided by cancer multidisciplinary team (MDT). Conventional treatment methods of CRRLM include hepatic resection with or without chemo-radiotherapy (neoadjuvant or adjuvant) and other conservative management. The development of novel and effective biotherapies in conjunction with chemotherapies for colorectal metastases have changed the natural course of CRC by enhancing the host’s own immunological anti-tumour responses against CRC and already shown to have a good potential and improve the prognosis of the disease. Treatment strategies utilizing and evaluating the benefit of the use of biotherapies in CRLM of the liver remain unclear.

2. Biology of the Metastatic Colorectal Cancer

Colorectal adenocarcinoma forms the largest disease type for CRCs. These adenocarcinomas derive from sequential changes involving mutations and key oncogenes and the loss of suppressor genes driving changes of adenomas into adenocarcinomas [1]. These mutational changes include KRAS and inactivation of tumour suppressor gene p53, which drive the pathogenesis of adenocarcinoma from adenomas [2]. The adenoma–adenocarcinoma sequence highlights significant avenues for targeted biological therapeutics. KRAS primarily belongs to the family of GTPases. Upon activation, KRAS induces the mitogen-activated protein kinase (MAPK) cascades and facilitates the transmission of signals from the cell membrane to the nucleus; the RAS gene, through downstream signalling, activates RAF proteins (including ARAF, BRAF, and RAF-1) [3][4].
The signalling pathway of the RAS–RAF–MEK–MAPK cascade regulates gene transcription controlling cancer cell proliferation, survival, migration and angiogenesis, abetting the progression of colorectal cancer (CRC) and promotes metastasis. Therefore, direct inhibition of MEK binding and effector function, consequently, may uncover a promising targeted therapeutic strategy for CRCs. There are several targeted inhibitors that are currently under evaluation in clinical trials showing initial clinical activity in a variety of tumours, including mCRC [4][5][6]. Specific markers that targeted therapies are aimed against include: Epidermal Growth Factor Receptor (EGFR), BRAF and tyrosine kinases, amongst others.
Resistance to molecular biological targeted therapies can be detected in the early and advanced stages of the disease, and this can occur in an estimated prevalence of up to 45% in patients with CRLM. Studies have shown that such mutations are independently associated with worse survival and poor overall outcomes [7][8].
The use of biological therapies in combination with chemotherapy is an essential option towards “conversional” strategies that aim to transform initially unresectable CRLM to resectable CRLM, and thereby has evidently increased the proportion of patients eligible for hepatic resection. Along with the advancements in the amalgamation of perioperative and surgical management, the use of effective chemotherapies, targeted biological therapies and novel methods of delivering these targeted therapies locally (e.g., hepatic intra-arterial chemotherapy, RFA, stereotactic radiotherapy) [9], as we strive to decrease perioperative morbidity and mortality, increase long-term survival by increasing the number of patients who are able to undergo complete hepatic resections (Figure 1). 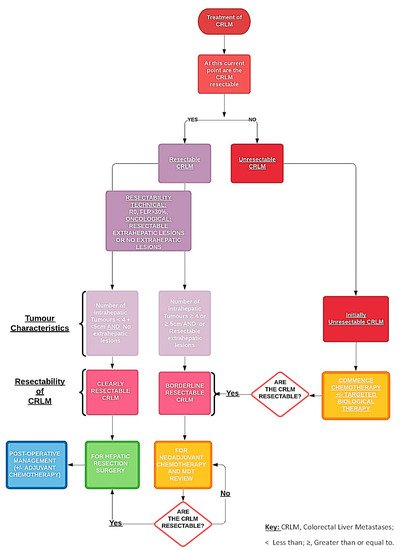 Figure 1. Pathway of managing resectable and unresectable colorectal liver metastases.
Chemotherapy is a chemically constituted anticancer therapy that acts by reducing the tumour burden and facilitates the destruction of rapidly growing cancer cells in the body. In colorectal cancer, the most used are shown in Table 1.
Table 1. Combined Chemotherapy Regimens.
With regards to targeted therapies used in the treatment of colorectal cancer and their metastases, the main forms of this type of therapy are Tyrosine Kinase Inhibitors, BRAF (proto-oncogene B-Raf or v-Raf murine sarcoma viral oncogene homolog B) inhibitors and epidermal growth factor receptor (EGFR) inhibitors (Figure 2). 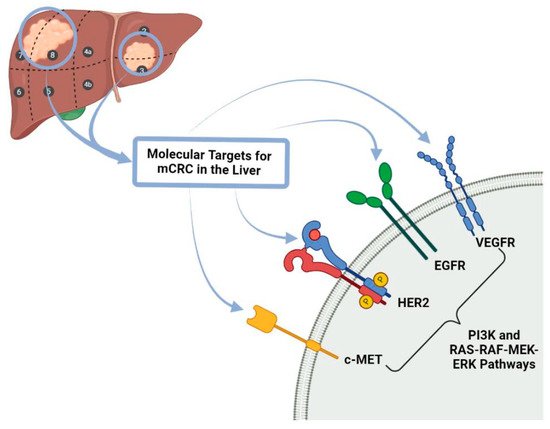 Patients with suspected CRC will have undergone several pre-operative evaluations, including have CT Thorax, Abdomen and Pelvis with Contrast. Occasionally, these preliminary imaging modalities identify the presence of a potential primary CRC and/or lesions that are detected within the liver (metachronous or synchronous) [10][11]. We then opt for additional imaging in the format of a contrast magnetic resonance imaging (MRI) of the Pelvis (in case of rectal cancers) and an MRI of the Liver with contrast. MDT involving colorectal surgeons, HPB surgeons, radiologists and oncologists decide on the most favourable management plan given the patient’s pathology encompassing CRC resection, chemotherapy with or without biological agents and hepatic resection. Resectable hepatic disease is considered for pre-operative chemotherapy followed by resection or attempt for immediate curative resection (R0) if pathology meets resectability criteria [12]: (i) CRLM must be resectable with negative margins and allow for the preservation of at least two contiguous liver segments with intact inflow, venous outflow and biliary drainage; (ii) the volume of this future liver remnant (FLR) depends on the functionality (~30% of total liver volume for a normal liver, FLR > 30%, if liver fibrosis is present). The tumour number and location and position are determined with imaging pre-operatively and intra-operatively as previously discussed, and for deeper-seated lesions in the liver parenchyma and smaller than 2 cm in diameter, combined radiofrequency ablation (RFA) is frequently used to minimize liver tissue loss and limits post-resection hepatic dysfunction.
Hepatic resection is considered the primary operation for mCRC if patients have a high tumour burden or with primary tumours located in the rectum, which will require pre-operative chemo-radiotherapy [13][14]. Major hepatic resection is defined as the resection of 3 or more hepatic segments associated with an increased mortality rate of ~15%. The use of neoadjuvant chemotherapy in combination with targeted biotherapies has shown to increase resectability in complex CRLM and unresectable CRLM prior to hepatic resection. In spite of the neoadjuvant therapies, there a credible risk associated with chemotherapy-associated liver injury (CALI), which can impact patient suitability for hepatic resection [15][16]. Hepatic changes such as sinusoidal obstruction, peri-portal inflammation, and steatohepatitis are associated with neoadjuvant therapies, which can alter a patient’s overall outcome [17]. Specifically, the direct use of oxaliplatin is linked to the development of sinusoidal obstruction syndrome in up to 38% of patients, while steatosis and steatohepatitis complicated 9.3% of patients receiving irinotecan. Patients with the following complications were more likely to suffer post-operative complications (severe sinusoidal dilation (OR 1.73) or steatohepatitis (OR 2.08)) [12].

3.4. The Issue of Disappearing Liver Metastases

Pre-operative chemotherapy in patients with resectable CRLM can drive the phenomenon of “disappearing” CRLM (DLM) in a quarter of resectable CRLM lesions [20]. This phenomenon is identified using imaging. Despite the positive radiological response, 80% of these lesions remain viable metastases [43]. The risk of DLM is a valid concern when commencing resectable patients on chemotherapeutic agents. CRLMs, particularly in resectable patients, ideally will need to be identified on pre-operative contrast-enhanced imaging, and initially, resection or ablative therapies should be considered as initial treatment. However, the majority of these DLMs are still apparent and identifiable intraoperatively under direct vision and use of intraoperative ultrasonography (IOUS) imaging [44][45]. In patients with high-risk lesions (e.g., deep parenchymal lesions and smaller lesions), often, MDTs opt to limit the cycles of chemotherapeutics and proceed to surgery first. In the event where we are unable to excise all the DLMs or other sites of metastatic disease, these patients often rigorously followed up and managed upon macroscopic recurrence with a staged resection approach [46].

The use of chemotherapy in patients with initially resectable disease varies from one centre to another; there is still no strict guidelines in the approach to integrating hepatic mCRC resection with systemic chemotherapeutics [47][48]. If patients have four or fewer mCRC resectable lesions with a primary colorectal tumour, then often centres opt for resection first over chemotherapy, unless there is a predicted strong response against chemotherapy. Initial chemotherapeutic treatment is reserved for patients with good exercise tolerance, few co-morbidities, multi-lobar tumour involvement and regional lymph node involvement. These patients are then re-evaluated with interval imaging 6–8 weeks to assess response to the chemotherapy and then re-discussed in MDT prior to surgical resection.
Beppu et al. demonstrated in the EPOC trial highlighted that the optimal neoadjuvant combination regime for patients with initially resectable CRLM with RAS mutations as such FOLFOX, FOLFIRI and/or CAPOX with or without bevacizumab; FOLFIRI with or without cetuximab or panitumumab; or FOLFOX with or without panitumumab or cetuximab (if RAS wild type) [49]. The consideration of using targeted biological agents in tumours that lack RAS/BRAF mutations in left-sided CRC. Research has shown that the site of the primary tumour influences the effectiveness of anti-epidermal growth factor receptor (EGFR) agents; we avoid the use of an anti-EGFR agent in right-sided primary tumours, even if RAS/BRAF wild type [25][50]. Evidence from the EPOC trial highlights that in 272 patients with resectable hepatic metastases of KRAS wild-type mCRC were given FOLFOX with or without cetuximab, pre-operatively and post-operatively for 12 weeks, and it is clear that the addition of cetuximab was associated with significantly worse progression-free survival (PFS) (15.5 versus 22.2 months) [22][51][52].