Arbutin is a compound with a structure in which one molecule of D-glucose is bound to hydroquinone. 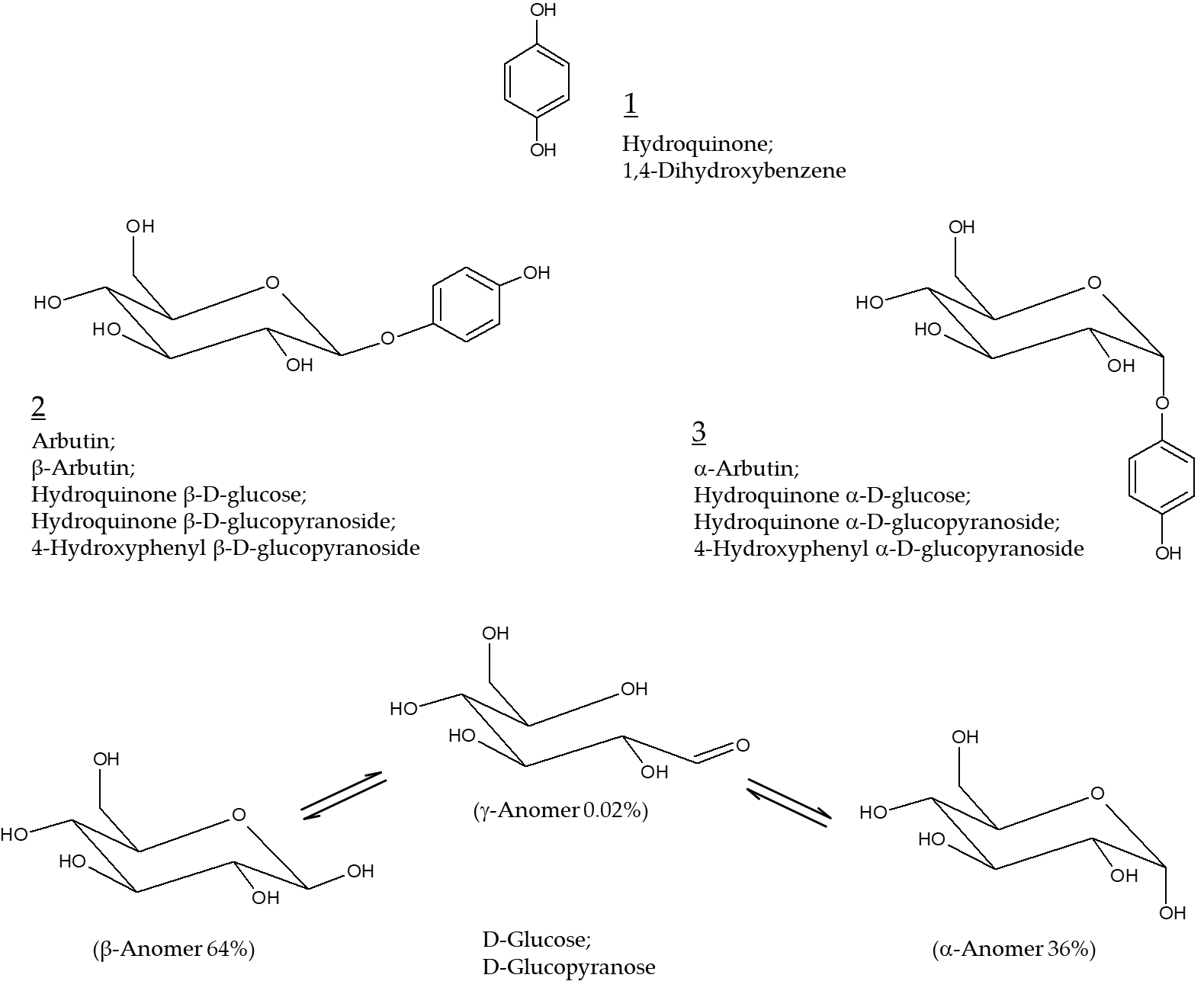 Arbutin has the effect of reducing melanin content at a concentration that has little effect on the viability of cultured human melanocytes. Maeda et al. showed that arbutin dose-dependently reduced TYR activity in human melanocytes at concentrations between 0.1 and 1.0 mM without significantly decreasing cell viability, and its inhibitory effect against cellular melanin synthesis was more potent than that of kojic acid or L-ascorbic acid when compared at a fixed concentration (0.5 mM)[4]. Akiu et al. reported that the melanin content of cultured murine melanoma B16 cells was reduced by arbutin, and the effect was explained by the decrease in intracellular TYR activity[3]. Arbutin was shown to inhibit melanin production in B16 cells stimulated by α-MSH and abrogate the hyperpigmentation effects of α-MSH in brownish guinea pig and human skin explants in organ culture experiments [5].

The decrease in TYR activity in human melanocytes by arbutin does not appear to be due to the decrease in the expression level of this enzyme. Maeda et al. reported that arbutin at 0.5 mM reduced the activity of intracellular TYR by 50% but did not affect the mRNA expression level of TYR[6]. Chakraborty et al. showed that arbutin (0.37 mM) lowered cellular melanin content but did not reduce the protein levels of TYR, TYRP-1, and TYRP-2 [7]. If so, arbutin may inhibit post-translational modification or maturation of newly synthesized TYR or may induce irreversible inactivation of already synthesized mature TYR. In an experiment in which lysates obtained from human melanocytes treated with 1.0 mM arbutin or not were analyzed by zymography, the TYR activity was reduced to 87% in the former [6]. Therefore, it is reasonable to consider arbutin as an inactivator of cellular TYR, rather than a suppressor of TYR gene expression.

In an in vitro assay using crude protein extracts derived from murine melanoma B16 cells, arbutin was shown to be able to directly inhibit the catalytic activity of TYR[3]. In the experiment with mushroom TYR, when L-DOPA was used as a substrate, arbutin showed a lower inhibitory effect than kojic acid and L-ascorbic acid: Their 50% inhibitory (IC50) values were 10 mM, 0.12 mM, and 0.2 mM, respectively[6]. In the experiment using human TYR (derived from melanocytes of Asian neonatal foreskins), when either L-tyrosine (for monophenolase activity) or L-DOPA (for diphenolase activity) were used as substrates, the IC50 values of arbutin were 5.7 mM and 18.9 mM, respectively: Arbutin appeared to be an inhibitor in a competitive relationship with L-tyrosine[6]. It is presumed that arbutin competes with a structurally similar substrate to bind to the active site of the TYR enzyme. More importantly, the concentration at which arbutin inhibits the catalytic activity of TYR in vitro is higher than the concentration that reduces cellular melanin, so there is no conviction as to whether this mechanism works in the cell.

There is another report that conflicts with many other studies that have reported the melanin-lowering action of arbutin. Nakajima et al. observed that in cultured normal human melanocytes (from neonatal Caucasian foreskins) treated with increasing concentrations of arbutin, the pigmentation became darker (effective concentrations, 2–8 mM), whereas the viability (2–8 mM) and the TYR activity (0.5–4 mM) of the cells decreased[9]. One possible explanation for the particular observation is that arbutin increases the synthesis of intracellular melanin by acting as a substrate of TYR as discussed above. Another possibility is that although arbutin inhibits the synthesis of new melanin, it blocks the release of synthesized melanin out of the cell, thereby causing the accumulation of melanin inside cells. Melanosome transfer is a unique biological process that delivers a package of organelles from melanocytes to keratinocytes[10], and various mechanisms, such as cytophagocytosis, membrane fusion, shedding-phagocytosis, and exocytosis-endocytosis, have been proposed to explain this process[11].

As such, contradictory results have been reported regarding which arbutin or α-arbutin is a more potent TYR inhibitor. The causes for this extreme inconsistency between studies are not clear and it is only assumed that the inconsistent results may be due to differences in the origin and purity of the enzyme, the conformational state of the enzyme, the type and concentration of substrates, oxygen concentration, pH, temperature, the purity of arbutin and α-arbutin, and the possibility of hydroquinone contamination or production. A conclusion could be reached if several institutions conduct studies comparing the activity of the same substances under standardized experimental conditions.

The antimelanogenic effects of α-arbutin were reported by Sugimoto et al. [16]. They showed that α-arbutin decreased melanin content and TYR activity in cultured human melanoma cells, at a concentration below 1.0 mM, without significant effects on cell growth and TYR mRNA level. They further showed that treatment of the human skin model with α-arbutin (250 g per tissue) reduced melanin content to a 40% level of the control, without causing cell death.

Choi et al. evaluated the depigmenting efficacy of aloesin and arbutin in a human study[17]. After irradiating the skin area of the forearm with UVR, a 10% solution of each substance was treated alone or together 4 times daily for 15 days. As a result, aleosin, arbutin, and their co-treatment reduced the UVR-induced hyperpigmentation by 34%, 43.5%, and 63.3%, respectively compared to the vehicle treatment.

A randomized, prospective, open-label study of female patients aged 26-50 years with epidermal or mixed melasma evaluated the skin-lightening effects of arbutin and ellagic acid[18]. A gel formulation containing arbutin (1%), ellagic acid (1%), or ellagic acid plus plant extract (each 1%) was applied to the face twice a day for 6 months, and the skin melanin index was measured before and after using the product. The above three gel formulations reduced the melanin index to 71% (p = 0.05), 79% (p = 0.38) and 76% (p < 0.05) levels of baseline, respectively. No evaluation of control products without an active ingredient was performed and this is a limitation of this study.

A randomized, placebo-controlled, double-blind trial involving 102 women, aged 26– 55, with melasma and solar lentigines, evaluated depigmenting efficacy of arbutin derived from Serratulae quinquefoliae[19]. The study group (n = 54) applied the cream containing the plant extract (final concentration of arbutin 2.51%) twice a day on the discolored side for 8 weeks. The results showed that the cream with the plant extract decreased melanin level in the skin pigmentation spot, compared to the control group (n = 48) applied with a placebo cream without the active ingredient. During 8 weeks of application, the melanin level of the test group decreased from 182.60 39.41 to 168.76 36.30 (p < 0.000001), and there was no significant change from 158.9 34.41 to 166.84 39.72 in the control group. Clinical improvement was observed in 75.86% of the female patients with melasma and 56.00% of the female patients with solar lentigines.

5. Antioxidant Properties of Arbutin and α-Arbutin.

Thus, arbutin and α-arbutin may reduce ROS levels by directly scavenging free radicals or indirectly enhancing the antioxidant capacity of cells through the activation of the Nrf2-ARE pathway. These antioxidant properties may contribute to the inhibitory action of arbutin and α-arbutin on melanin synthesis in cells. The antioxidant action-based mechanism and the mechanism based on the TYR inhibitory action are not mutually exclusive and are assumed to work together for the inhibition of eumelanin synthesis (Figure 2). 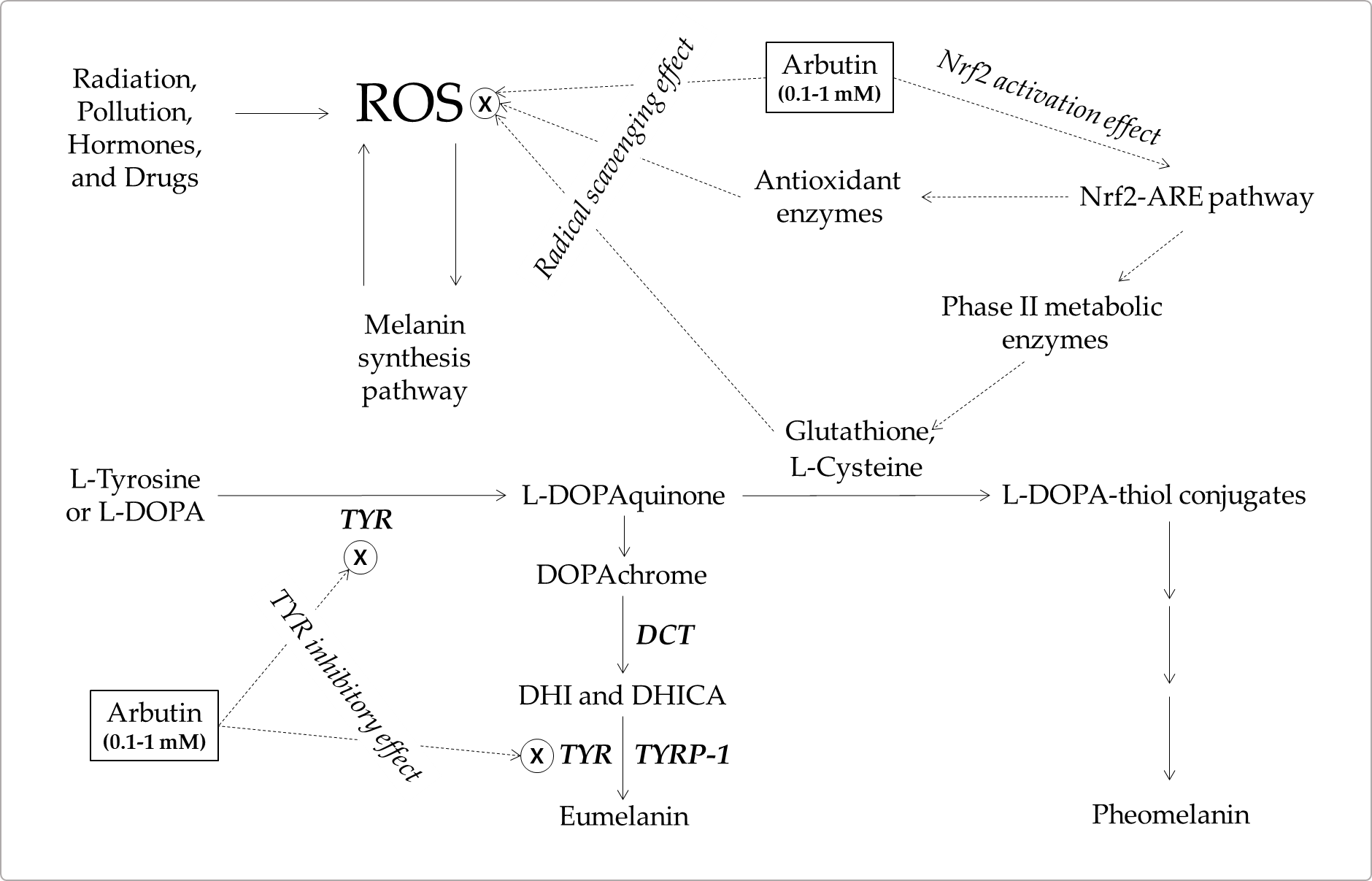 Figure 2. A hypothetical mechanism for the inhibition of eumelanin synthesis by arbutin involving its tyrosinase (TYR) inhibitory and antioxidant activities. Arbutin inhibits the catalytic activity of TYR. It also scavenges reactive oxygen species (ROS) from various sources that can induce melanin synthesis, apoptosis, or tumorigenesis. It can activate the erythroid 2-associated factor 2 (Nrf2)-antioxidant responsive elements (ARE) pathway to enhance the antioxidant capacity of cells. Increased thiol compounds, such as L-cysteine and glutathione, can react with L-DOPAquinon to form DOPA-thiol conjugates, which enter the pheomelanin synthesis pathway. As a result, eumelanin synthesis via DOPAchrome can be selectively downregulated by arbutin. Inhibitory targets of arbutin are indicated with ⓧ.