SPR and LSPR-based virus sensors amplify the signal response of samples at extremely low concentrations, which is otherwise difficult to read and analyze using conventional methods. Commercially available virus detection systems, except PCR, are easy to use and can process multiple samples but have considerable sensitivity limitations, resulting in false negatives. The detection methods based on SPR and LSPR require only virus capturing at the sensor site, rendering the methods simple and highly sensitive.

The current COVID-19 pandemic caused by SARS-CoV-2 has revealed how highly infectious emerging viruses spread in modern society and the gravity of social consequences such infections can cause [1][2][3]. Viral infections can spread rapidly, especially via droplet transmission, as in the case of SARS-CoV-2 and similar viruses [4]. Nowadays, where people travel around the world with much ease, viruses capable of spreading via droplet transmission are one of the most dangerous causes of infectious diseases. Outbreaks of emerging viruses have been attributed mainly to adaptive outbreaks [5][6]. Genetic mutations that allow infection of previously uninfected hosts can lead to explosive pandemics [7]. These facts imply that emerging viral outbreaks and pandemics will continue to occur with high transmissibility. One way to prevent or control such pandemics is to develop a virus detection technology that enables the prevention of the global spread of viruses.

Polymerase chain reaction (PCR)-based detection methods form the gold standard methods for virus detection [8]. However, the cost of equipment, the need for skilled technicians, and the time required for detection are their limitations [9]. For the SARS-CoV-2 pandemic, the problem was almost solved by expanding the number of sites with PCR facilities and active research and development worldwide [10][11][12]. In recent years, the shortage of skilled personnel, which is the most important limitation of PCR, is also being solved by automating the PCR system to detect the extracted viral RNA [13][14]. Therefore, next-generation technologies should have a reliable single-step detection of the target virus and require minimum time for detection.

On the surface of a solid material such as a metal with a free charge, the surface charge (mostly electrons) oscillates collectively due to light irradiation. This phenomenon is called surface plasmon resonance (SPR). [15]. SPR-induced surface charge oscillations are coupled with electromagnetic waves under certain conditions. The quantum of these oscillations is described as the surface plasmon polariton (SPP), and the excitation of SPP is an essential step in SPR biosensors [16][17][18]. SPR significantly increases the surface sensitivity of the substrates to react with the target material in certain spectroscopic measurement techniques, as characterized by the conditions of resonance between the irradiated light and the substrate [19][20]. The increased sensitivity of SPR has also been applied in virus detection techniques [21][22][23][24][25]. Compared to SPR on an individual substrate such as a thin metal film, the plasmon phenomenon similarly produced by irradiating light on metal nanoparticles is described as localized SPR (LSPR) [26]. The plasmon phenomenon generated on the nanoparticle surface generates a strong electric field in the vicinity of the nanoparticles [27]. Within this plasmon region, the interaction of light with molecules and other types of fluorescent nanomaterials is enhanced [28]. Furthermore, when nanoparticles that form an electric field are in close proximity to each other or bind together, a significantly enhanced electric field is formed between the particles, and in this electric field, Raman scattering of certain chemical species is electromagnetically enhanced [29]. Surface-enhanced infrared absorption (SEIRA) has also been reported as an LSPR-based application [30][31]. The potential for application in biosensing is high, because infrared absorption can be induced in the infrared region by adjusting the shape and size of the nanoparticles. [32]. The plasmon resonance effect can be applied to various biosensing fields because it produces a strong optical response and signal enhancement at the micro/nanoscale.

In order to effectively utilize the properties of SPR, a method to specifically bind the virus to the metal film is necessary. Antibodies are suitable as trapping materials because they can be modified based on the substrate using chemical cross-linking, and by selecting a structure with high specificity, a highly selective sensor can be easily constructed [33].

The sensitivity of a rapid diagnostic kit for influenza virus (IFV) based on the principle of immunochromatography, which is widely developed as a commercial test using antigen–antibody reactions, was 103 plaque forming unit (PFU)/mL, 10⁴ copies/mL, and 100 pg/mL [34][35][36]. The most basic IFV detection using a thin gold film showed lower sensitivity than the rapid detection kit reported in the case study. However, using a special thin film structure, the virus could be detected with an average sensitivity 100 times higher than that of the existing techniques. From this point of view, it can be considered that the advancement of thin metal films is essential for the practical application of SPR-based virus detection systems. Several reported cases of successful detection of biomaterials using SPR with high sensitivity are attributable to the advancement of thin metal films [37][38][39].
In recent years, SPR-based virus detection using aptamers, which can bind to the target antigens and antibodies, has been reported [40][41][42]. The use of aptamers is also effective in SPR-based virus detection technology because of the ease of functionality, as many SPR-based platforms use gold, which exhibits high antioxidant properties. Aptamers are promising as basic materials for biosensors because they can be synthesized in large quantities at a low cost once the sequence is determined. In contrast, hybridization of viral DNA/RNA is also required in detecting the virus in an SPR-based system. It has been reported that SPR can also be used to monitor DNA hybridization [43][44]. Therefore, it is possible to detect viruses with high sensitivity by hybridizing viral DNA/RNA with a target DNA/RNA-specific probe modified on the surface of the SPR substrate. In this section, the focus was on virus sensors using antibodies as capture materials. However, the strength of SPR as a sensor principle is that versatile and highly sensitive detection systems using materials that capture the target virus at the interface can be constructed.
Regarding the improvement of the SPRi device, Guner et al. reported the development of a very efficient system [45]. The authors successfully designed a low-cost SPR-based sensor chip based on the commercially available optical storage disks and developed a compact, smartphone-mountable device using LEDs as the light source (Figure 3). Imaging and detecting antigens captured by the antibodies modified on a thin silver and gold bilayer film were performed. The authors concluded that using a two-layered metallic thin film that can utilize visible light led to the development of a compact and effective biosensing smartphone device. The results also showed that the detection sensitivity was comparable to that of the commercially available SPRi systems, and the authors discussed the future potential of the system as a basis for successful miniaturization and cost reduction. 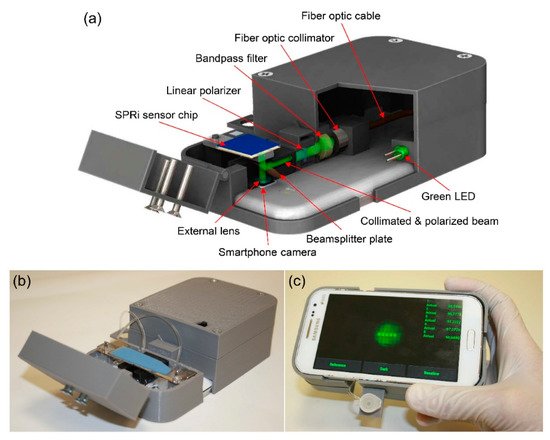 3. LSPR Phenomenon on Nanoscale Systems and Application of LSPR to Virus Sensing

After LSPR, an enhancement of electrolysis and light quenching occurs in the vicinity of the nanoparticles, based on the size, shape, and material used [51][52][53]. Therefore, the size and shape of the nanoparticles need to be precisely controlled to obtain the desired optical response. The most fundamental application of optical signal response by LSPR is the change in the peak absorption wavelength due to the local refractive index change on the nanoparticle surface (plasmon peak shift) and the fluorescence enhancement effect caused by using near-field light.

The near-field light formed near the noble metal nanoparticles by LSPR enhances the interaction of the light with the fluorescent material present at a certain distance in the region [54][55][56]. The resulting significant fluorescence enhancement effect of the fluorophores is widely used in the development of highly sensitive sensing techniques, as the effect enables the emittance of signal responses even from small amounts of sample. These observations render LSPR a potential signal amplification method for virus sensing [57].

Kim et al. designed a structure in which a virus was sandwiched between two different sizes of AuNP on an AuNP-laden substrate [58]. In this method, two gold nanoparticles in close proximity repel each other in a plasmon resonance state in the presence of the virus, resulting in a stronger peak shift effect than that in the non-sandwich state. The signal enhancement effect of the sandwich structure has been demonstrated, and a 100-fold increase in the sensitivity has been successfully achieved compared to the virus captured by AuNP-laden substrate only. Furthermore, the sensitivity of the sandwich structure differed depending on the size of the gold nanoparticles on the secondary antibody site. The smaller the particle, the stronger the signal response, even at low sample concentrations. This work demonstrated that particle size has a significant effect on the use of LSPR for developing application-based systems.

The LSPR-based fluorescence virus sensor should have a controlled nanoscale distance between the plasmon particles and fluorescence material. In the case of antigen–antibody reaction, forming a thin film on the plasmon particles beforehand to control the nanometer distance is effective [59]. A typical example of functionalization of nanomaterials is the self-assembled monolayer of the layer-by-layer method [60][61][62]. Both methods essentially require a thin film of desired thickness and the modification of antibodies and aptamers. When virus-specific DNA/RNA is used as a probe, the length of the sequence during hybridization can be easily adjusted. Therefore, it is only necessary to functionalize the probe directly on the plasmon particle [63][64]. The development of virus detection technology based on the LSPR fluorescence enhancement effect is challenging because it requires precise control of the nanoparticles’ size and particle distance to detect viruses with higher sensitivity. However, developing a simple and reproducible control method will be a necessary element for the next generation of LSPR detection technology, as all the reported studies have succeeded in detecting viruses with high sensitivity.

SPR and LSPR-based virus sensors amplify the signal response of samples at extremely low concentrations, which is otherwise difficult to read and analyze using conventional methods. Commercially available virus detection systems, except PCR, are easy to use and can process multiple samples but have considerable sensitivity limitations, resulting in false negatives. The detection methods based on SPR and LSPR require only virus capturing at the sensor site, rendering the methods simple and highly sensitive. To achieve high sensitivity, the structure and thickness of the thin metal film must be optimized for the SPR-based sensor, and the size and shape of the plasmon particles must be controlled for the LSPR-based sensor. In addition, the SPR-based sensors are witnessing advancements with respect to reusability and miniaturization. As for LSPR, it is easy to construct a simple system to observe the optical response effectively. Collectively, studies on SPR and LSPR-based virus sensing research have already demonstrated sufficient sensitivity. In particular, LSPR is more advantageous for miniaturization because it requires only a light source and a detector as the device configuration. Therefore, as with the SPR and LSPR system, more practical developmental research will continue to progress in the future. The next-generation virus detection technology should combine simplicity and rapidity with high sensitivity.