The distinctive anatomical assemble and functionally discrete multicellular cerebrovasculature dynamics confer varying rheological and blood–brain barrier (BBB) permeabilities to preserve the integrity of cerebral white matter and its neural microenvironment. This homeostasis intricately involves the neurogliovascular unit (NGVU) and glymphatic system that manages the flow of cerebrospinal fluid (CSF), interstitial fluids (ISF), metabolic waste, and clearance through the venous circulation. NGVU refers to the integration of neuronal structures, glial cells (including the microglial), and vasculature (i.e., capillaries, arteries, and/or arterioles) governed by the astrocytes.

The distinctive anatomical assemble and functionally discrete multicellular cerebrovasculature dynamics confer varying rheological and blood–brain barrier (BBB) permeabilities to preserve the integrity of cerebral white matter and its neural microenvironment. This homeostasis intricately involves the neurogliovascular unit (NGVU) and glymphatic system that manages the flow of cerebrospinal fluid (CSF), interstitial fluids (ISF), metabolic waste, and clearance through the venous circulation. NGVU refers to the integration of neuronal structures, glial cells (including the microglial), and vasculature (i.e., capillaries, arteries, and/or arterioles) governed by the astrocytes [1][2]. The neurotoxic soluble waste products are continuously released from the NGVU into the ISF space due to the brain’s high metabolic rate [3] and the glymphatic pathway is considered a major route for the drainage of those metabolites.
As a physiologically integrated NGVU and glymphatic system serving a particularly vulnerable cerebral white matter (from hypoxia, metabolic insults, infection, and inflammation), a likely insidious lifetime process could inflict microenvironment damages that may lead to pathological conditions. Two such conditions, cerebral small vessel disease (CSVD) and vascular (or arteriosclerotic) parkinsonism (VaP), with poorly understood pathomechanisms are linked to this brain-wide NGVU. CSVD is a spectrum of a chronic, progressive disorder affecting the cerebral microvasculature (or microcirculation) involving small (or micro, sizes 50–400 µm) penetrating arteries (chiefly of middle cerebral artery tributaries), arterioles, capillaries, and small veins (or venules) that penetrate and supply the white matter and deep grey matter of the brain subcortical region [4][5]. On the other hand, VaP, which accounts for about 4.4 to 12% of parkinsonism [6], is phenotypically characterised by symmetrical lower-body parkinsonism and vascular lesions, particularly white matter hyperintensities (WMHs) or multi-infarct in the basal ganglia and subcortical region with predilection in the elderly (>65 years) and in males [7][8][9]. The WMHs, in turn, are a recognised imaging spectrum of CSVD manifestations, and in relation to a disrupted NGVU, also include enlarged perivascular spaces (ePVS).

2. Overview of the Neurogliovascular Unit

The long-accepted view, that information processing networks in the brain are mainly governed by the brain’s neurons, is being expanded with growing bodies of evidence that other brain cells are equally crucial in maintaining the homeostasis and physiology of the brain activity [10][11]. These other neural cells include the glial cells that constitute about 50% of the brain’s volume, although the approximate numbers and ratio of neuron to glial in the brain differ across species [12][13]. Moreover, due to evolving developments in glial research, studies have found that glial cells extensively contribute to the brain structure and function through the modulation of neurotransmitter and synaptic activity, induction, and maintenance of barrier properties of the brain endothelium that forms the BBB, potassium ion (K+) movement (or K+ siphoning), and global brain’s computation [14][15][16][17][18].
The BBB is at the level of cerebral microvascular endothelium that forms the microvascular wall, of which properties are induced by the associating cells, particularly astrocytes [19]. Astrocytes, among others, are the type of glial cells that modulate the ongoing neurotransmission process through peri-synaptic processes. These astrocytic processes wrap around the cerebral vasculature [20][21]; hence, facilitating the vasoactive signal [22] (see Figure 1). Moreover, emerging experimental data supports that vascular vasomotion may also influence the neuronal activities termed as “reverse influence”, and the disturbances of these neurons-to-glial-to-vascular or vascular-to-neurons dynamics may lead to cerebrovascular and neurodegenerative disease [23][24]. These advancements in cerebrovascular and glial research highlight the importance of the dynamic interactions between neuronal cells, glial cells (governed by astrocytes), and the cerebral vascular systems (including microvessel) in health and disease states, which led to the term neurogliovascular unit (NGVU) being introduced [1][2]. 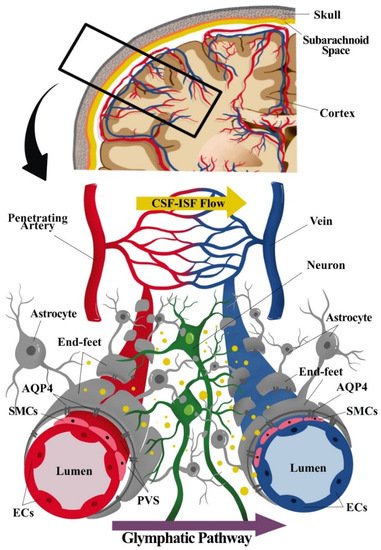 Figure 1. Component of the neurogliovascular unit (NGVU) and glymphatic system. The NGVU includes the neuronal cells, glial cells, and the vasculature (arteries and veins), including the smooth muscle cells (SMCs) and the pericytes (not shown in the figure) surrounding the vascular endothelial cells (ECs). Whereby, the glymphatic system consists mainly of astrocytes and astrocytic end-feet sheathing the vasculature. The transport of waste product through cerebrospinal fluid (CSF) from arteries passing through astrocytic aquaporin pore-4 (AQP4) into the interstitial fluid (ISF), hence, mixing of CSF and ISF. The waste solutes and/or by-products flow (indicated as yellow dots in the figure) following the glymphatic pathway to be absorbed for further waste clearance system.

The NGVU signalling and/or dynamics are crucial for the sustainability of the brain structure and functions, and any disturbances to these systems contribute to numerous neuropathologies. The cellular components of the NGVU include specialized brain capillary endothelial cells (ECs), which form the vascular barrier with restrictive tight junctions, surrounded by pericytes, vascular smooth muscles cells (vSMCs), neurons, and glial cells [2][19] (see Figure 1). The NGVU also involves the perivascular space (PVS) or Virchow–Robin space between the endothelium and basement membranes of the brain parenchyma at the pre- and postcapillary levels. The PVS, together with the glymphatic system, aids in fluids transport for the removal of waste products and biologically active molecules [25][26].
Functionally, the NGVU modulates the metabolic demands together with the cerebral blood flow (cBF), in addition to the adenosine-mediated vasodilation following metabolic activities and EC-derived nitric oxide (NO) signalling [27]. Meanwhile, as aforementioned, astrocytes integrate and convey neuronal activities to vasoactive signals [28]. For example, during a synaptic transmission the concentration of calcium ion (Ca2+) increases in the peri-synaptic end-feet processes; hence, propagating through the astrocytic processes via activated phospholipase A2. This, in turn, initiates the synthesis of vasoactive arachidonic acid (AA) metabolites in the end-feet surrounding vascular capillaries and arterioles by epoxygenases and cyclooxygenases [29][30]. Subsequently, the AA metabolites formed may diffuse into the neighbouring vSMCs or pericytes of the vascular wall whilst ω-hydroxylase metabolizes the AA metabolites to 20-hydroxyeicosatetraenoic (20-HETE). Depending on the concentration of Ca2+ and local oxygen (O2) at the end-feet, the synthesis of either 20-HETE or prostaglandin E2 may predominantly lead to vascular constriction or dilation, respectively [28][31]. On the other hand, the astrocytic Ca2+ signalling may also be triggered by the changes in the extracellular Ca2+ concentration [32]. Following this, the K+ ions are released from the astrocytes onto the vSMCs, causing hyperpolarisation of the vSMCs by opening large-conductance Ca2+-activated K+ channels that are largely expressed on the perivascular end-feet plasmalemma. This process is known as smooth muscle K+-dependent relaxation or “K+ siphoning” [33][34], i.e., the movement of the K+ ion inside the NGVU, from the neurons, through the glial cell (astrocytes), to the vessels. The amount of K+ ion released determines the vessel dynamics, in this case a modest increment of Ca2+ at the astrocytic end-feet that induces dilation, whilst a higher increment induces the constriction [27]. Thus, K+ ion is considered a mediator of metabolic coupling between neuronal activity and cBF.
Furthermore, Ca2+ increments in neurons and/or interneurons also contribute to the regulation of local cBF. One example is the change in vascular dynamics mediated by the endothelium-dependent relaxation response to acetylcholine (ACh) via the NO pathway. In this case, ACh leads to endothelium vasodilation by a stimulation of the production of NO by endothelial NO synthase (eNOS) activation. The diffusion of NO to the vSMCs and/or pericytes induces vasorelaxation by the activation of the soluble guanylate cyclase and the subsequent production of cyclic guanosine monophosphate (cGMP) [35]. In short, the relative changes in the cBF in response to neuronal activity is a complex multisystem signalling/pathway involving various vasoactive mediators in the NGVU (i.e., the neurons, glial cells (astrocytes), and vasculature). However, different brain regions may have different NGVU functional pathways. For example, interneurons activated by glutamatergic collaterals and the complex topographical relationship between the cellular compartments of NGVU may account for these disparities [28][36]. Immediate, short lasting and sustained vasodilatory responses may also differ depending on the mediators and pathways involved [37]; hence, any aberrancy in these multisystem dynamics may lead to differing neurological syndromes though they share similar fundamental and/or overlapping rheological features.

2.2. The Glymphatic System and NGVU

As discussed, a sub-component of the NGVU such as the CSF-filled PVS or Virchow–Robin space surrounding the cerebral perforating arteries and veins is currently subject to active research following the discovery of the glymphatic (or clearance) system (i.e., the removal and transport of waste products and biologically active molecules), whereby PVS is the fundamental node [38]. The term glymphatic refers to the “glia + lymphatic” pathway or brain’s “front end” of waste clearance, named after the primary role of glial cells and the similarities to the authentic extracranial lymphatic system [39][40]. Generally, the glymphatic pathway includes a PVS network for CSF transport that is connected to a downstream authentic lymphatic system associated with the dura meninges, cranial nerves, and large vessels exiting the skull [40][41]. It is suggested that neurotoxic soluble waste products are continuously released from the NGVU, and the glymphatic pathway is, thus, considered a major route for the drainage of these toxic metabolites [3].
Unlike a more complete description of the glymphatic system in rodent brains [42], the existence of the glymphatic system in the human brain remains contentious as extensively reviewed by [25]. Based on the glymphatic pathway of the waste clearance process in rodent brains, three serial steps were recognised. First, the CSF (in bulk-flow) is repeatedly transported from the basal cistern into the subarachnoid space, then entering the peri-arterial spaces or PVS. Then, from the PVS, the CSF is transported into the ISF space through aquaporin 4 (AQP4) of the astrocytic end-feet processes that lead to CSF–ISF mixing and the removal of waste solute. Lastly, the CSF–ISF and interstitial waste solute mixture is then transported towards the peri-venous compartment of the larger central veins before exiting into the extracranial lymphatic vessels and systemic circulation [3][42].
The dysfunction of the glymphatic system has been speculated to be related to changes in the NGVU structure, particularly the PVS, whereby the enlarged PVS (ePVS) has been proposed to cause a glymphatic aberration that results in the accumulations of toxic metabolic products that are harmful to the brain microenvironment [43][44]. Moreover, AQP4 also plays an important rheological role in regulating the influx and efflux of ISF flow [45]. Several studies have shown that gene deletion and the reduced polarized expression of AQP4 on the astrocytic end-feet lining the PVS significantly reduced the glymphatic clearance, notably leading to the reduced clearance of amyloid beta (Aβ) in Alzheimer’s disease [42][46][47]. Moreover, aberrations in the glymphatic CSF–ISF exchange have been associated with various neuropathological conditions such as Alzheimer’s disease [48], multiple sclerosis [49], stroke [50], migraine with aura [51], traumatic brain injury [52], and even depression [53]. A recent animal study by the authors of [45] involving spontaneously hypertensive rats (SHRs), also demonstrated that an aberration in the glymphatic transport is implicated in the pathogenesis of arteriolosclerotic CSVD because of a combination of ePVS and a reduced astrocytic AQP4 polarity. Thus, the presence of ePVS may well indicate an aberrant NGVU and glymphatic system rheological dynamics, and the potential pathophysiological clue to numerous neuropathological conditions.