The human retina may be affected by two macro groups of diseases, namely maculopathies and retinopathies. Whereas maculopathies are confined to the central part of the retina, bounded by the vascular arcades, retinopathies may extend up to the extreme retinal periphery. These two categories can be further subdivided according to the main features characterizing the disease, thus taking into consideration exudative or atrophic phenomena.

The management of exudative retinal diseases underwent a revolution due to the introduction of intravitreal treatments. There are two main classes of intravitreal drugs, namely anti-vascular endothelial growth factors (anti-VEGF) and corticosteroids molecules. The clinical course and the outcome of retinal diseases radically changed thanks to the efficacy of these molecules in determining the regression of the exudation and the restoration of the macular profile.

Exudation is an active process, and its nature depends on each specific retinal disease, causing fluid to accumulate within the retina or in the subretinal space. It mainly involves variable amounts of fluid, the major pathogenic features of which are the breakdown of the blood-retinal barrier and increased inflammation [1][2][3]. Retinal diseases can also be characterized by other types of debris, including lipofuscin and lipidic and proteinaceous materials [3][4]. Retinal diseases can also be characterized by the progressive degeneration of inner and outer retinal layers. These atrophic changes may occur independently or in the context of an initial exudative disease [3][5].

Current retinal therapeutic approaches are based on these premises and designed to prompt the exudation to regress, stimulate debris reabsorption or prevent the atrophy from expanding.

The prognosis of retinal exudative diseases changed radically after the introduction of intravitreal therapies. While the old laser-based treatments were effective in blocking exudation, they were associated with an extremely poor visual outcome [6][7][8]; nowadays, patients can expect to preserve their quality of life and a good visual function. The current intravitreal therapeutic bullets consist of anti-vascular endothelial growth factor (anti-VEGF) and corticosteroids. The pros of anti-VEGF drugs are their easier management and the low instance of side effects; the cons comprise their limited duration, meaning a large number of injections are required, and their contraindication in patients displaying a high risk of cardiovascular dysfunction. In contrast, the pros of corticosteroids include their longer duration, thus reducing the number of injections administered and their greater anti-inflammatory action. Conversely, corticosteroids are closely associated with an increase in intraocular pressure and a faster progression of cataracts.

3. The Role of Inflammation in the Human Retina

A comprehensive scenario regarding the present and future intravitreal drugs for exudative retinal diseases, with particular regards to exudative AMD, are reported in Figure 3. 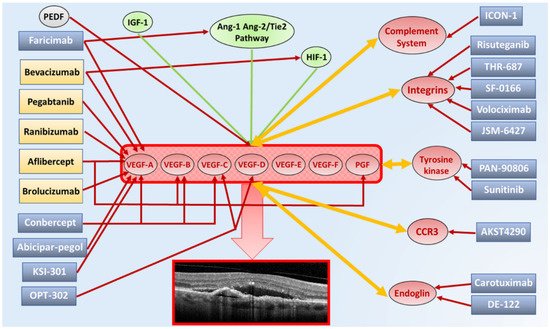 AKST4290 (Alkahest, San Carlos, CA, USA) is the inhibitor of the natural receptor for eotaxin C-C chemokine receptor type 3 (CCR3), a molecule proving to be highly expressed in choroidal neovascularization [16]. This molecule is under investigation as an oral formulation (400 mg), combined with intravitreal anti-VEGF injections, in AKST4290–201 (NCT03558061) and AKST4290–202 (NCT03558074) phase 2a clinical trials.

Carotuximab (DE-122) (SANTEN, Osaka, Japan; TRACON Pharmaceuticals, San Diego, CA, USA) is an antibody directed against endoglin, and was developed on the basis of evidence showing endoglin to be actively involved in angiogenesis [17]. It has been found that a hypoxic status may stimulate the production of endoglin, which is also enhanced in actively proliferating endothelial cells. A mouse model of neovascularization has provided promising results regarding the use of anti-endoglin in combination with anti-VEGF injections [18]. DE-122 is under investigation in a phase 2a randomized controlled trial (NCT03211234).

The complement system is made up of an extremely complex network of molecules that play a fundamental role in innate immunity and in the activation of the inflammatory cascade. The role of the complement system has been widely demonstrated in both exudative and dry retinal diseases; complement activation is a major factor in enhancing pro-inflammatory mechanisms and in the onset and progression of cell death [19][20][21]. For these reasons, complement inhibitors are currently under investigation for both forms of retinal diseases, through the development of different molecules acting at multiple levels in the complement system’s activation cascade. The evidence regarding the efficacy of complement inhibitor drugs is not conclusive as yet, and there are many ongoing clinical trials designed to demonstrate the rationale for employing these molecules in wet and dry retinal diseases [22][23][24].

KSI-301 (KODIAK sciences, Palo Alto, CA, USA), is a new generation antibody biopolymer conjugate resulting from the combination of humanized anti-VEGF monoclonal antibody and a phosphorylcholine-based polymer, which has been developed to increase the duration of anti-VEGF action. This molecule is under investigation in a phase 1b trial (NCT03790852), showing promising results in neovascular age-related macular degeneration, diabetic macular edema and retinal vein occlusion, and in a DAZZLE Phase 2 trial (NCT04049266) involving only neovascular age-related macular degeneration patients.

Unlike exudative retinal diseases, non-exudative retinal diseases lack any approved treatment, to date. These disorders, caused by multifactorial etiopathogenesis, including environmental and genetic factors, mainly involve the progressive degeneration of retinal cells, with onset of retinal atrophy. Most non-exudative retinal diseases start with the degeneration of the retinal pigment epithelium-photoreceptor complex; outer retinal impairment and atrophy is followed by damage to the inner retinal cells, with irremediable loss of retinal function [27][28][29].
Treatment for non-exudative retinal diseases is based on nutraceutics, which employs a combination of different natural substances known to slow down degenerative processes. Although several molecules are under investigation, most of the evidence concerns formulations developed for dry age-related macular degeneration by Age-Related Eye Disease Studies 1 and 2 (AREDS1 and AREDS2) [30]. The AREDS1 formulation contained vitamin C (500 mg), vitamin E (273 mg/473 IU), beta-carotene (15 mg), zinc (80 mg), and copper (2 mg) [31], whereas the AREDS2 formulation differed in the removal of beta-carotene and addition of lutein/zeaxanthin and omega-3 long-chain polyunsaturated fatty acid [32]. Vitamins and ions are important antioxidants and promote enzymatic functions. Lutein/zeaxanthin produce many effects, including removing reactive oxygen species and protecting against photooxidative stress. Omega-3 long-chain polyunsaturated fatty acids are key cell membrane components and are involved in many metabolic pathways. These nutraceutical supplements have been associated with a slowing in the progression of geographic atrophy and a reduced probability of experiencing advances in the stages of age-related macular degeneration. Different formulations of vitamins, polyunsaturated fatty acids, minerals and other compounds have been proposed for inherited retinal dystrophies, supported by modest evidence regarding their clinical efficacy [33].

Brimonidine is a selective α2 adrenergic (α2A) receptor agonist used as intraocular pressure-lowering medication in glaucoma. Previous evidence suggested this molecule plays a neuroprotective role through as yet poorly understood mechanisms [35][36]. This molecule is under investigation in a Brimonidine Intravitreal Implant in Geographic Atrophy Secondary to Age-related Macular Degeneration (BEACON) phase 2 study (NCT02087085).