Irritable bowel syndrome (IBS) is a functional gastrointestinal disorder whose aetiology is still unknown. Most hypotheses point out the gut-brain axis as a key factor for IBS. The axis is composed of different anatomic and functional structures intercommunicated through neurotransmitters.

Irritable bowel syndrome (IBS) is defined as a functional gastrointestinal disorder, whose main symptoms are recurrent abdominal pain, changes in the frequency or characteristics of stool and abdominal distension. As a functional gastrointestinal disorder, IBS does not have a morphologic, metabolic, or neurologic aetiology. It is diagnosed using Rome IV clinical parameters. IBS can be classified in 4 different subtypes according to patient’s bowel habit: IBS with predominant constipation (IBS-C), IBS with predominant diarrhoea (IBS-D) and mixed-IBS which alternates between diarrhoea and constipation (IBS-M). Another type of IBS is called unclassified (IBS-U) [1], where individuals who do not fall into the other intestinal pattern categories are included.
IBS is considered the most prevalent gastrointestinal disorder; its prevalence is estimated to be around 10% to 15% of the population in Europe and North America. Despite its high prevalence, the physiopathology of IBS is still unknown. There are many hypotheses about IBS aetiology: psychosocial disorders, microbiotic alterations, hypersensitivity to some food, intestinal motility disorders, changes in visceral pain perception, or neurotransmitter alterations, creating a complex disorder of the gut-brain axis [2]. This axis is composed of intestinal microbiota, the intestinal epithelial barrier, neurotransmitters, the central nervous system (CNS), enteric nervous system (ENS), autonomic nervous system, and the hypothalamic-pituitary-adrenal axis. Together, all these components communicate bidirectionally (mainly through neurotransmitters), so intestinal signals can influence brain functions and vice versa. In fact, IBS patients show differences in brain activation areas in response to rectal distension and pain compared with healthy controls; suggesting that IBS patients lack central activation of descending inhibitory pathways [3]. Recent studies have reported alterations in brain networks and networks of interacting systems in the gut in IBS patients, evidencing a potential role of neurotransmitters on IBS pathophysiology [4]. On the other hand, psychosocial factors such as stress, anxiety, or depression, where neurotransmitters can play a key role, are considered risk factors for IBS and may even contribute to an exacerbation of IBS symptoms [5].
In recent years, many studies have focused on the association between IBS and changes in gut microbiota [6]. Gut microbiota can modulate host production of different neurotransmitters, as well as produce some neurotransmitters themselves [7]. Gut microbiota could play a role in the aetiology of IBS as they influence intestinal motility, gastrointestinal physiology, neurotransmitter levels, and behaviour. Actually, germ-free rats display a delay in intestinal peristalsis and that can be reverted by colonization with Lactobacillus acidophilus or Bifidobacterium bifidum [8]. IBS patients show perturbed microbiota composition, although there is no common microbiotic signature among IBS patients [9]. An increase of Firmicutes, especially Clostridium and Ruminococcaceae with a decrease of Bacteroidetes, particularly Bifidobacteria can be obtained in several mucosal and faecal samples from IBS patients [10]. Moreover, preliminary data suggest correlations of regional brain structural differences with gut microbial taxa [4].
The pathophysiology of IBS is incompletely understood, but it is well established that alterations in the gut-brain axis, altered CNS processing, motility disturbances and visceral hypersensitivity contribute to IBS aetiology. Other, less relevant or less studied mechanisms involved in IBS include genetic associations, alterations in gastrointestinal microbiota, cultural factors, and disturbances in mucosal and immune function [11]. Alterations in the gut-brain axis and differences in brain function are major contributing factors to IBS aetiology; however, the implications of key neurotransmitters such as norepinephrine (NE), serotonin, glutamate, GABA, and acetylcholine (ACh) in IBS are still unknown. The aim of this review is to evaluate the current evidence about neurotransmitter dysfunction in IBS and explore its potential therapeutic treatment. The Rome IV criteria for the diagnosis of IBS consist of abdominal pain associated with an alteration in either stool form or frequency, occurring for at least 6 months. Neurotransmitter dysfunctions could contribute to IBS and some of its most prevalent symptoms used for its diagnosis, grouped into two main aspects, visceral hypersensitivity and altered motility (Figure 1), although they may also be involved in other symptoms such as diet-related digestive disturbances, psychosocial disturbances, anxiety, depression, fatigue, hypertension, dyslipidaemia, etc. Therefore, targeting those dysfunctions may open novel lines for IBS management, taking into account, that these symptoms may also be indirect effects mediated by other biological and psychological factors. 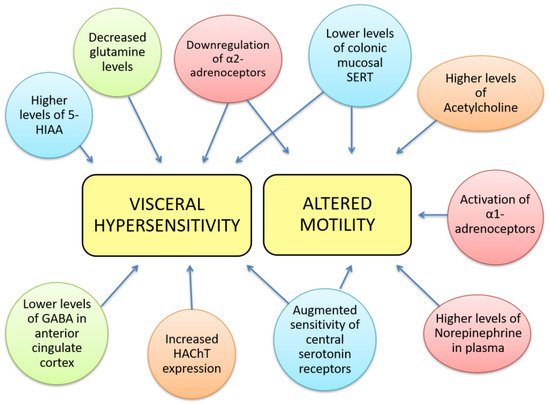 Noradrenaline (NE) is a key catecholamine with multiple physiological and homeostatic functions, key in the sympathetic nervous system. It is involved in excitation and the alert state during awake time, and in sensory signal detection. Secondarily, NE plays a role in behaviour, memory, attention, and learning. In fact, NE depletion in rats triggers distractibility and attentional deficits [12]. NE also has a leading role in spatial working, and memory functions, and its level is correlated with cognitive performance.

Serotonin was previously called enteramin by Erspamer and Asero due to its gastrointestinal functions; after discovering that it was identical to the vasoconstrictor substance known as such, it was renamed serotonin (5-HT, 5-hydroxytriptamin). Serotonin is synthesized from the amino acid tryptophan in enterochromaffin cells from the intestinal epithelium and serotonergic neurons. Ninety-five percent of serotonin production is from the gastrointestinal tract, meanwhile, 5% is from the nervous system. Once in the blood, serotonin can be stored in platelets, in which there are high levels of SERT (serotonin transporter) [13]. SERT uptakes 5-HT into cells, where it can be stored or degraded. SERT function is key to regulate 5-HT’s availability, and consequently 5-HT signalling.
Serotonin has multiple functions at the digestive level as a modulator of gastrointestinal secretion, peristalsis, or absorption; and also at a central level, controlling behaviour and critical neurological functions [14]. Experimental exogenous intake of serotonin results in multiple responses. This wide range of effects is due to the vast localization and diversity of 5-HT receptors [15]. Fourteen different 5-HT receptors have been identified and clustered in seven families based on their signalling pathways. Most of them are coupled to G proteins, and only the 5-HT3 receptor is a ligand-gated ion channel [16]. It is now known that some 5-HT receptors have specific functions, although many of them trigger diverse and antagonistic responses [17].

Glutamate is the main excitatory neurotransmitter in the CNS [18], and it has been described as having multiple roles as a nutrient, catalytic intermediate, or excitatory molecule [19]. Glutamate is an amino acid that can be introduced exogenously through the diet; however, exogenous glutamate crosses neither the intestinal barrier nor blood-brain barrier. Glutamate as a neurotransmitter is produced de novo in the brain from glucose [20]. After glutamate release from neurons, this amino acid is taken up by glia cells, and there, it is turned to glutamine by glutamine-synthetase for recycling to neurons. Glutamate reserves are refilled again when glutamine is engrossed by neurons. This means glutamine metabolism is the principal cycle for replacement of glutamate in neurons [21]. A high protein diet decreases glutamate and glutamine concentrations in plasma, although this phenomenon is still unexplained [22].

Gamma-aminobutyric acid (GABA) is an amino acid derivate of glutamate. Glutamic acid decarboxylase (GAD) enzyme is responsible for the conversion of glutamate to GABA by α-decarboxylation; afterwards, GAD interacts with the vesicular GABA transporter mediating the vesicular uptake of GABA [23]. Brain-derived neurotrophic factor (BDNF) increases GAD expression, regulating GABA homeostasis [24]. Ninety percent of the GABA synthesized is subsequently degraded by GABA-transaminase, which is present in neurons and glia cells. After its release from the nervous system, GABA transporter uptakes GABA from the synaptic cleft.

acetylcholine (ACh) is an excitatory neurotransmitter that is named after its chemical structure consisting of acetic acid and choline. Choline is present in dietary foods, and acetic acid derives from mitochondrial coenzyme acetyl-coA. The synthesis of ACh takes place in axon terminals and is catalysed by the enzyme choline-acetyl-transferase; then it is introduced in synaptic vesicles by the vesicular ACh transporter. After its release and binding to nicotinic or muscarinic receptors, ACh is degraded by acetylcholinesterase, mainly present in the synaptic cleft. Once hydrolysed, choline returns to presynaptic neurons by the action of a high-affinity choline transporter.

The involvement of other neurotransmitters cannot be neglected. Several studies have pointed out the potential role of histamine and dopamine in IBS pathogenesis.
Histamine has been related to gastrointestinal inflammation and abdominal pain. The main histamine receptors, which take part in gastrointestinal processes, are H1 and H4, although H2 is related to the production of gastric acid [25]. In IBS patients, levels of urinary histamine have correlated to the severity of IBS symptoms, especially abdominal pain [26]. The administration of an H1-antagonist revealed different responses in IBS patients compared to healthy controls, demonstrating possible overstimulation of the histaminergic system in IBS patients [27]. H1 and H4 receptors could have a key role in the pathogenesis of colitis and postinflammatory visceral hypersensitivity, because their expression is increased in colon tissue of rats that have colitis. JNJ7777120, an H4-antagonist, seemed to ameliorate abdominal pain in that postinflammatory colitis model [28]. Novel interventions are being proposed that involve blocking H1 receptors, as ebastine has been found to improve IBS symptoms, including visceral hypersensitivity and abdominal pain [29], and ketotifen has been found to enhance health-related quality of life and increase the pain threshold in IBS patients [30]. Similarly, AST-12O, which adsorbs histamine from the intestinal lumen, could reduce pain and bloating in IBS-D and IBS-M patients [31].
On the other hand, several studies have investigated alterations in the dopaminergic system in IBS patients. In fact, IBS patients show lower dopamine levels in plasma [32] and urine [26] compared to healthy controls. Dopamine mediates colonic peristalsis, activating muscle contraction through D1 receptors and inhibiting it by D2 receptors [33], being related to motility dysfunction. However, the administration of dopamine or its agonists enhances IBS symptoms in patients with comorbid restless legs syndrome [34]. Nowadays, metformin is a widely used drug for the treatment of mellitus diabetes type II. Nevertheless, this drug has been studied for its antinociceptive effect through the activation of central D2 dopamine receptors in IBS patients [35]. Similarly, activation of those dopaminergic receptors by butyrate enemas decreases visceral allodynia and colonic hyperpermeability [36].