Chitooligosaccharides are the products of the hydrolysis of chitosan, and because they are soluble in water, they have several applications, such as antimicrobial, antioxidant, anti-tumor, and agricultural purposes [4][5][6][7][8][9][10].

Among hydrolysis techniques, acid hydrolysis has emerged as a convenient method for depolymerizing polysaccharides. However, acid hydrolysis generally requires severe treatment, as the rigid crystalline region in the chitosan granules inhibits acid penetration. For this reason, a high concentration of acid, ranging from 5 to 12 M, is used in most studies [7][11][12][13]. However, excessive acid loading can cause glucosamine degradation, which significantly reduces yield and generates major waste deposition problems [14][15]. In recent studies, a smaller amount of acid only made it possible to obtain medium molecular weight chitosan in a short hydrolysis time [3]. In high time, low molecular weight chitosan and chitooligosaccharides were obtained. However, yield decreased due to soluble products such as glucosamine monomers and dimers [14][16]. Therefore, current studies seek to develop the technique using different types and concentrations of acids associated with ionic liquids, induced electric fields, or other hydrolysis methods.

This review will present the main hydrolysis techniques of chitosan and analyze the main factors that influence the obtaining and characteristics of low molecular weight chitosan and chitooligosaccharides effectively at a lower cost.

The acid hydrolysis of glycosidic bonds involves the following steps: (1) protonation of oxygen in the glycosidic bond through the connection of a proton (H 3O + ) to the glycosidic bond; (2) adding water to the final reducing sugar group; (3) decomposition of protonated glycosidic bonds ( Figure 1 ). In this case, catalytic protons may be present in the water contained in the samples, and the protonated amino group of chitosan is also likely to act as a proton donor in catalysis [12]. 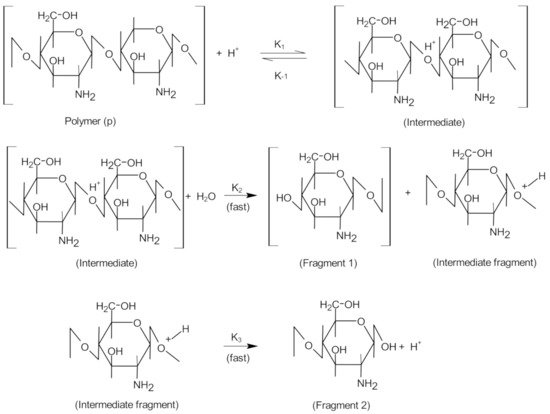 This type of hydrolysis is mainly influenced by the concentration of hydrogen peroxide, time, and temperature of hydrolysis, Table 1 .

When associated with acetic acid, its molar ratios influence the recovery of chitooligosaccharides. Therefore, the higher the concentration of hydrogen peroxide about acetic acid, the higher the yield of chitooligosaccharides (dimers–decamers), with a yield of 36%, 22%, 18%, and 14%, for molar ratios of 5.7, 2.8, 1.9, and 1.7 respectively, in addition to obtaining chitosan with lower molecular weight, 6.61, 7.7, 9.29, and 9.03 kDa, respectively [21].

As with other types of hydrolysis, time will also influence when using hydrogen peroxide. In chitosan hydrolyzed by H 2O 2 in HCl solution (0.9%) for 0.5–8 h, there was a reduction in molecular weight with the increase in hydrolysis time. A rapid decrease from 480 to 50 kDa in 0.5 h has been shown, with a 95% yield [25]. In the study using hydrogen peroxide and acetic acid, the yields of chitooligosaccharides increased considerably with increasing hydrolysis time, reaching an optimal yield of 62.42% in 4 h [10].

The ideal value in the hydrolysis rate depends on the type of enzyme. In the study using the enzymatic complex Celuzyme ® XB, formed by cellulase, xylanase, and β-glucanase, the highest hydrolysis rate was reached at 51 °C, reaching a relative activity of 90%. Additionally, the increase in temperature tends to decrease its catalytic activity. This occurs due to the modification of the tertiary structure that may lose its active and functional conformation [27]. This behavior was also observed when using pepsin, which showed an increase in hydrolysis activity by increasing the temperature to 45 °C, with a relative enzymatic activity of 75% [28].