The proteomes of biofluids, including serum, saliva, cerebrospinal fluid, and urine, are highly dynamic with protein abundance fluctuating depending on the physiological and/or pathophysiological context. Improvements in mass-spectrometric technologies have facilitated the in-depth characterisation of biofluid proteomes which are now considered hosts of a wide array of clinically relevant biomarkers. Promising efforts are being made in the field of biomarker diagnostics for haematologic malignancies. Several serum and urine-based biomarkers such as free light chains, β-microglobulin, and lactate dehydrogenase are quantified as part of the clinical assessment of haematological malignancies. However, novel, minimally invasive proteomic markers are required to aid diagnosis and prognosis and to monitor therapeutic response and minimal residual disease.

Advances in proteomic technologies, protocols, and bioinformatic pipelines in recent decades have led to substantial progress in understanding the molecular phenotype of organisms by providing mechanistic insights into a wide range of cellular processes. Clinical proteomics aims to translate these discoveries to the clinic for the improvement of patient care. A major goal for many researchers in the biomedical community is the discovery of highly sensitive biomarkers to aid diagnosis, prognosis, and the monitoring of disease progression. Analysing changes in the proteome of physiologically or pathologically distinct samples (differential proteomics) enables researchers to identify proteins that are associated with different disease states [1]. Furthermore, the use of quantitative proteomic protocols, such as mass spectrometry-based techniques for discovery and targeted analyses, facilitates the quantitation of these proteins to identify candidate biomarkers with altered abundances for potential clinical applications [2]. Detecting and quantifying these protein markers in patient samples can contribute to an earlier diagnosis, a more accurate prognosis, and/or identifying therapeutic regimens that are more likely to benefit individual patients. Biofluids, such as serum, plasma, saliva, cerebrospinal fluid (CSF), urine, and bone marrow-conditioned media, are often considered reflections of a tumours’ molecular make-up, possessing genomic, transcriptomic, and proteomic indicators of disease (Figure 1). They represent a less invasive, less expensive, and more reproducible means of detecting disease-associated biomarkers when compared to invasive tissue biopsies (Table 1) [3]. 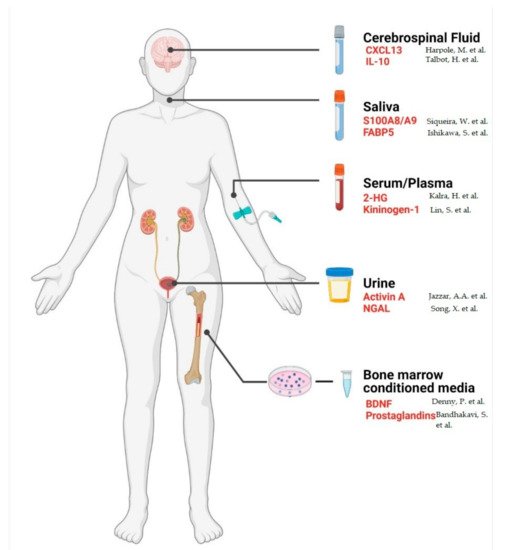 Serum and plasma are often spoken about synonymously as they only differ from one another by the presence or absence of clotting agents [4]. Serum is retrieved following blood coagulation and centrifugation to remove fibrin clots, blood cells, and platelets. Plasma is prevented from clotting by adding an anti-coagulant, such as ethylenediaminetetraacetic acid (EDTA) or heparin, prior to extraction [5]. Despite the minor differences in composition, several studies have suggested that use of the incorrect sample source can lead to an improper diagnosis, hence why often either serum or plasma are preferred for certain assays [6][7][8]. Due to alterations in glucose levels between serum and plasma, serum is not recommended as a medium for the diagnosis of diabetes [9]. In addition, serum is the preferred sample source for quantitation of complement activation as EDTA-treated plasma must be transferred to veronal-buffered saline containing Ca2+ and Mg2+ to enable complement activation, and lepirudin as an EDTA replacement, prior to analysis [10].

2.1. Complexity of the Serum/Plasma Proteome

The high potential of serum/plasma as sources for protein biomarker discovery lies in their close proximity to all tissues, making their proteomic profiles reflective of the overall state of the organism [4][11]. An advantage of using serum or plasma for proteomic analysis is the minimally invasive, low-risk method of sample collection, which also facilitates sequential testing during the course of a disease. Despite the benefit of a high protein content, characterising the serum/plasma proteome can be challenging due to the nine-fold dynamic protein concentration range with just over 20 proteins including albumin, transferrin’s, immunoglobulins, and apolipoproteins, making up ≈99% of the serum/plasma proteome. The remaining 1% contains many low-abundant circulatory and secreted proteins that are often of more interest in research and as potential disease-associated biomarkers [12][13][14].

2.2. Methods for Analysing the Serum/Plasma Proteome 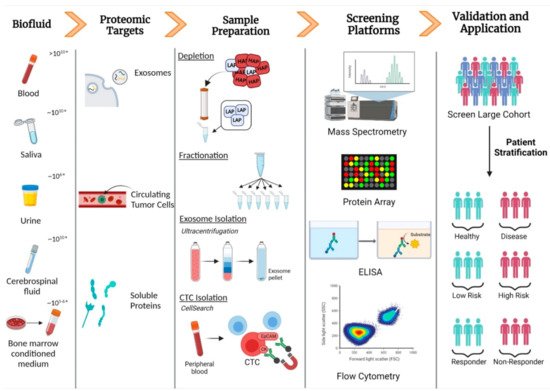 2.3. Detecting Biomarkers in Serum and Plasma

In addition to proteins, plasma, and serum are home to a diverse range of cells and other macromolecules including circulating tumour cells (CTCs), circulating tumour nucleic acids (ctNAs), and tumour-derived extracellular vesicles, namely, exosomes, which have been shed from tumours and their metastatic sites [17][18][19]. Detection of abnormal concentrations of these macromolecules in plasma/serum may lead to cancers being diagnosed at an earlier stage, facilitating a more accurate prognosis and improved chance of patient survival [3]. Other reviews on liquid biopsies have focused on the evaluation of circulating free nucleic acids in haematological malignancies [20].

Human serum and plasma are widely used biofluid sources for proteomic analysis of haematological malignancies. The derivation of blood cancers from cells of the haematological system indicates serum and plasma as rich sources of blood cancer-associated biomarkers. Many blood-based protein biomarkers, such as lactate dehydrogenase and β2-microglobulin, have been identified in haematological malignancies (Table 2). However, they often serve as complementary markers of disease meaning invasive procedures such as bone marrow biopsies are required in addition to blood-based tests to confirm diagnosis, response to treatment, and relapse. Furthermore, with the approval of more targeted therapies for the treatment of blood cancers, such as venetoclax (BCL2 inhibitor), detecting specific molecular signatures to personalise therapeutic regimens is becoming increasingly important.
Table 2. Current clinically used protein biomarkers in haematological malignancies.
Many proteins have been found to be differentially expressed in the serum of patients with haematological malignancies compared to healthy controls. Recently, a study carried out by Chanukuppa et al. used a combination mass spectrometry, gel electrophoresis, and enzyme-linked immunosorbent assays (ELISAs) to identify and validate a panel of five serum proteins: haptoglobin; kininogen 1; transferrin; apolipoprotein A1; and the well-known MM marker, albumin, as potential diagnostic and prognostic biomarkers in MM [39]. Interestingly, a recent peptidomics study incorporating supervised neural network analyses identified a serum-based diagnostic MM model consisting of four peptides capable of distinguishing between MM disease states including healthy controls, newly diagnosed MM, and patients in complete remission, illustrating the potential of this model as a minimally invasive means of monitoring disease progression and treatment efficacy. The four peptides were found to be derived from dihydropyrimidinase-like 2, platelet factor 4, alpha-fetoprotein, and fibrinogen alpha [40]. A number of malignancies have been found to be associated with mutations in the gene encoding isocitrate dehydrogenase 1 (IDH1) and IDH2, including acute myeloid leukemia (AML) and myeloproliferative neoplasms [41][42][43]. The enzymes derived from these mutated genes have altered activity, producing 2-hydroxyglutarate (2-HG), an oncometabolite found to be increased in the serum of AML patients with IDH mutations and reduced following response to treatment. Monitoring serum 2-HG levels using liquid chromatography tandem mass spectrometry (LC–MS/MS) has been incorporated in various clinical trials to determine the efficacy of novel treatments in AML with IDH mutations [44]. The use of this technique has been reported to result in variable reference cut-off values due to the presence of two enantiomers. A recent study by Bories et al. used a chromatographic separation technique developed by Poinsignon et al. in order to establish individual reference values for each enantiomer to facilitate routine clinical use of serum 2-HG as a biomarker for disease monitoring in AML [45][46]. In acute lymphoblastic leukemia (ALL), various serum proteins have been identified in recent years as candidate biomarkers including S100A8, coagulation factor XIII subunit A, and a panel of 9 serum-derived glycoproteins [47][48][49]. Studies incorporating larger cohorts and clinically relevant workflows are required to bring “potential” and “candidate” serum biomarkers from benchtop to clinical use, a difficult task in certain cases due to low reproducibility, a lack of method standardisation, and difficulties translating the test used during discovery to a clinical-grade technology [50]. Studies focusing on the proteomic cargo of serum/plasma-derived extracellular vesicles in haematological malignancies have revealed interesting results, identifying proteins associated with drug resistance [51], survival, proliferation [52], and myelosuppression [53]. Blast-derived exosomes isolated from the sera of AML patients were found to contribute to immune suppression, in part by the inhibition of natural killer (NK) cell functions. Exosome-derived transforming growth factor-β1 contributes to NK cell suppression via a signalling cascade resulting in the downregulation of natural killer group 2 member D (NKG2D), a transmembrane receptor essential for the cytotoxicity of NK cells [54]. Incubation of neutralising antibodies targeting TGF-β with TGF-β+ AML exosomes followed by co-incubation with the NK cell line, NK-92, restored the cytotoxic activity of NK cells, illustrating exosome-derived TGF-β as a potential therapeutic target for the restoration of immune cell cytotoxicity in AML [55]. Efforts are being made by several research groups to improve current methods of CTC isolation and detection in MM. High numbers of circulating malignant plasma cells in the peripheral blood of the pre-malignant conditions, monoclonal gammopathy of un-determined significance (MGUS), and smouldering MM (SMM), as well as active MM, are associated with an increased likelihood of disease progression and a poor prognosis [56][57]. In addition to CTC enumeration, genomic and proteomic analysis of CTCs represents a unique opportunity for the molecular characterisation of these cells to guide personalised medicine by identifying biomarkers and therapeutic targets in a non-invasive, longitudinal manner [58].
Cancer relapse is of foremost concern due to the high rate of recurrence among patients with haematological malignancies. Monitoring minimal/measurable residual disease (MRD) with high sensitivity is essential for the early detection of relapse in patients. Improving the sensitivity of blood-based MRD testing has been the central goal for many researchers in recent years to facilitate longitudinal sampling without subjecting the patient to numerous invasive procedures. Currently, clonoSEQ is the only FDA-approved next-generation sequencing (NGS)-based assay to detect MRD in bone marrow samples from acute lymphoblastic leukaemia (ALL) and MM patients and in bone marrow samples and peripheral blood from patients with chronic lymphocytic leukaemia [59][60][61]. Several studies have used mass spectrometry-based methods to assess MRD by detecting clonotypic tryptic peptides derived from monoclonal immunoglobulins in the serum of MM patients, demonstrating a high sensitivity and the ability to detect clonal Igs in the serum of MM patients deemed to be MRD-negative by multiparameter flow cytometry (MFC) [62][63]. The increase in the use of MS-based techniques in the evaluation of M-proteins in plasma cell disorders (PCDs) led the international myeloma working group (IMWG) to provide recommendations on the use of MS in PCDs, encouraging further research on MS-based techniques as a means of testing MRD in the peripheral blood of MM patients [64].

2.5. Proteomics of Other Biofluids in Haematological Malignancies

Proteomic analyses focused on saliva, bone marrow conditioned media, urine and cerebrospinal fluid in haematological malignancies are discussed in detail in the full version of this review article.