Bone marrow stromal cells (BMSCs) are multipotent cells in the bone marrow which can differentiate into chondrocytes, osteoblasts, adipocytes (fat cells) and other cell types. Many factors have been identified to control the process of BMSC osteogenic or adipogenic differentiation in the bone.

Bone marrow mesenchymal stem cells (BMSCs) have the potential and capacity to differentiate into multiple cell types, such as chondrocytes, osteoblasts, and adipocytes [1][2]. The commitment and differentiation of BMSCs are tightly controlled by factors of their micro-environment, as changed signals and molecules can lead to their abnormal differentiation causing changes in volumes of trabecular bone and bone marrow fat. Bone loss, which is replaced with increased bone marrow fat, occurs under pathological conditions, including aging, menopause, chronic glucocorticoid treatment, or cancer chemotherapy treatment [3][4]. This phenomenon has been shown to occur due to a shift in BMSC differentiation to favour the formation of fat cells or adipocytes (adipogenesis) over bone-forming cells or osteoblasts (osteogenesis). Under these conditions, there are some similarities in the pathological stresses characterized by suppressed osteogenic signals and elevated adipogenic signals, leading to reduced osteogenesis and enhanced adipogenesis differentiation. This change is associated with the development of osteoporosis and increased fracture risk [5][6]. While numerous studies have described the cellular mechanisms of bone/fat balance in the bone marrow [4][7][8], the underlying mechanisms for unbalanced bone/fat formation from the BMSCs has not been fully established.
Osteogenesis or adipogenesis arises due to BMSC differentiation responding to activation of specific signalling pathways. Many recent or current investigations have been trying to identify key factors that can control the activation or attenuation of major signalling pathways and transcription factors in BMSCs. MicroRNAs are 19–25 non-coding RNA molecules that play essential functions in RNA silencing and post-transcriptional regulation of encoding genes by interacting with the 3’ untranslated region (3’ UTR) of the mRNA transcripts that present similar amino acid sequences to inhibit or degrade the target genes [9][10]. MicroRNAs are critical mediators of many biological processes, including tissue formation, cell differentiation, and cancer development [11][12]. Currently, knowledge is continuously accumulating related to microRNA involvement in BMSC differentiation regulation [13][14][15]. By conducting microRNA array and profiling/pathway analyses, certain microRNAs and their specific targets have been identified to control the process of BMSC differentiation, which has led to the elucidation of the functions and regulations of some microRNAs in regulating bone/fat formation [16][17]. 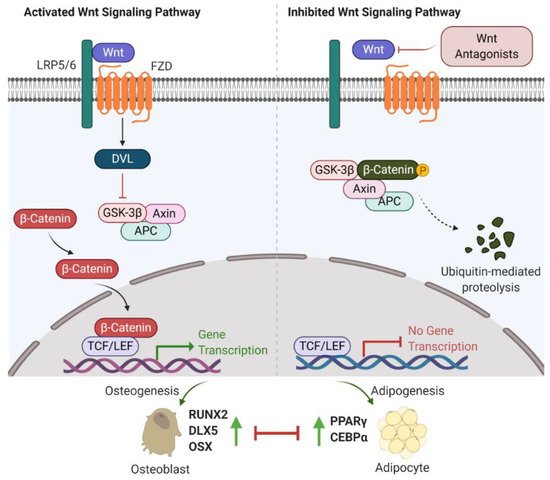 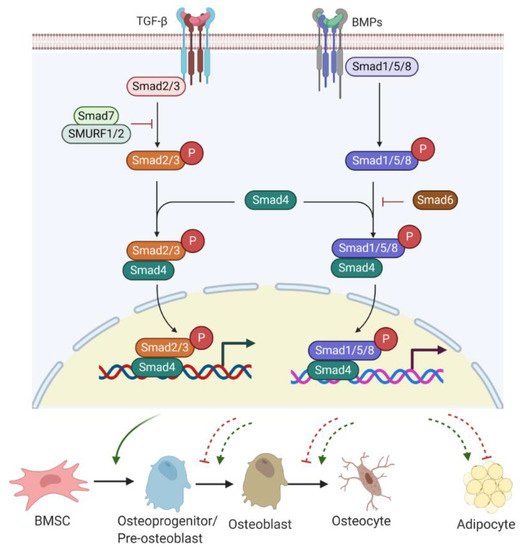 3. Key Factors and Markers Involved in Bone or Fat Regulation

3.1. Key Factors and Markers Involved in Osteogenesis and Bone Formation

Bone formation is a highly restricted process associated with the commitment of numerous BMSCs towards osteoprogenitor cells, followed by the formation of pre-osteoblasts and mature osteoblasts. Many studies have been conducted to understand the factors regulating gene expression during BMSC commitment, osteoblast differentiation, and maturation.
BMPs, members of TGF-β and osteoblast-specific transcription factor OSX are considered important factors to control the commitment of MSCs to the osteoblast lineage [44]. RUNX2 is required for the proliferation of osteoprogenitors and is considered the earliest transcription factor to determine the osteoblast lineage [45][46]. Once osteoprogenitor cells begin to differentiate into pre-osteoblasts, there is a proliferation phase, marked by the high expression of alkaline phosphatase (ALP), a vital enzyme to initiate and regulate bone mineralization [47]. The expression level of ALP is upregulated depending on osteoblast maturation, and thus ALP is considered as a specific molecular marker for the early stage of osteoblast differentiation [48]. In addition, other transcription factors, such as activating transcription factor 4 (ATF4) and DLX5, are all involved in osteoblast differentiation.
The transition of pre-osteoblasts to mature osteoblasts is marked by the secretion of molecules such as osteocalcin (OCN), bone sialoprotein (BSP), osteopontin (OPN), and type 1 collagen, which is essential for osteoid formation and mineralization [49]. OCN is thought to be related to mature osteoblast activity and, therefore, is seen as a marker for late-stage osteoblastogenesis [50]. Type 1 collagen forms osteoid, which is the matrix upon which osteoblasts stimulate the precipitation of calcium salts and phosphorous within the newly formed osteoid to form bone mineral, or hydroxyapatite [51].

3.2. Key Factors and Markers Involved in Adipogenesis and Fat Formation

Adipocyte differentiation is characterized by changes of expression of a series of specific genes and factors that determine the adipocyte phenotype. These changes in gene expression primarily happen at transcriptional levels, which are reflected at different stages of adipogenesis. Numerous studies have explored the molecular mediators that drive the transition from BMSCs to mature adipocytes. The development of adipocytes can be briefly described into two phases [52][53]. The first phase is the commitment of BMSCs to pre-adipocytes, a process influenced by various extracellular factors, including BMPs, insulin/insulin-like growth factor-1 (IGF-1) and TGF-β [54]. The presence of TGF-β negatively regulates adipogenesis and suppression of adipogenesis might be obtained through TGF-β supplementation [54]. While the morphological difference between precursor cells and pre-adipocytes cannot be identified, pre-adipocytes lose the differentiation potentials into other cell types [54]. The second is known as terminal differentiation, in which the pre-adipocytes obtain the characteristics of mature adipocytes and gradually obtain their physiological functions, such as lipid deposition and transport and secretion of adipocytic factors [55].
Two transcription factors, C/EBPs and PPARγ, are recognized to be involved in pre-adipocyte growth arrest and the promotion of terminal adipocyte differentiation and accumulation of lipid droplets [56][57][58]. Some family members of C/EBP, including C/EBPα, C/EBPβ, C/EBPγ, and C/EBPδ, have been recognized to be expressed in adipocytes. The early induction of C/EBPβ and C/EBPδ stimulates the induction of C/EBPα and PPARγ [52][59]. Activated C/EBPα and PPARγ work cooperatively in adipogenesis by activating other adipogenic-specific genes and lipogenic enzymes. C/EBPγ likely inhibits adipocyte differentiation by inactivation of, and heterodimerization with, C/EBPβ [52][60]. Furthermore, activated PPARγ can promote pre-adipocytes to exit from the cell cycle, triggering increased energy delivery to cells [56][61]. C/EBPα and PPARγ are well characterized as primary transcription factors in adipogenesis and fat formation. Other factors are involved in regulating adipogenesis by modulating C/EBPα and PPARγ expression. Sirtuin I (SIRTI), a histone deacetylase that affects energy homeostasis, inhibits adipogenesis by binding to PPARγ. In SIRTI adipocyte-specific knockout mice, PPARγ was found to be hyperacetylated, which lead to a decrease in PPARγ phosphorylation and increased insulin sensitivity [62].

MicroRNAs are small non-coding RNA molecules that regulate the post-transcriptional gene expression by inhibiting target mRNA translations or promoting transcript degradation [9][10]. MicroRNAs that have been found involved in bone and fat formation regulation are summarized in Figure 3. They function through modulating the two key signalling pathways (the Wnt/β-catenin and the TGF-β/BMP/Smad signalling pathways) and the associated transcription factors (Figure 3). 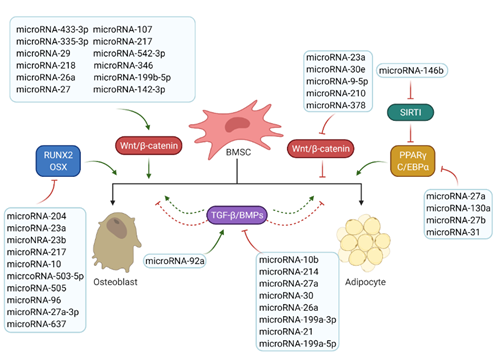