Solid platelet-rich fibrin (PRF), consisting of coagulated plasma from fractionated blood, has been proposed to be a suitable carrier for recombinant bone morphogenetic protein 2 (BMP2) to target mesenchymal cells during bone regeneration.

Platelet-rich fibrin (PRF) is generated by centrifuging blood, aiming not only to remove erythrocytes but also to obtain a fraction consisting of plasma enriched with platelets and leucocytes. Since the introduction of PRF use in 2006 [1], numerous protocols have been established with the goal of optimizing the ratio of platelet counts and the overall yield of the PRF fraction generated [2]. The protocols for preparing solid PRF consider the selection of blood collection tubes containing clot activators such as silica and silicone [3]. PRF membranes are produced by compressing the solid PRF clot so that the serum is removed. PRF membranes are then applied clinically to defects with the overall goal of supporting the natural processes of wound healing and bone regeneration [4][5], which require the coordinated action of growth factors, including those released from solid PRF membranes [6][7].
Apart from its intrinsic growth factors, solid PRF can serve as a carrier for the delivery of recombinant growth factors [8]. Among these proposed growth factors is bone morphogenetic protein (BMP2), a member of the transforming growth factor beta (TGF-β) superfamily that is characterized by its osteoinductive potential [8][9]. Based on FDA approval, recombinant BMP2 has been applied together with an absorbable collagen sponge into defect sites during spinal surgery [10] and bone augmentation during regenerative dentistry [11]. To combine the favorable healing properties of PRF with the osteoinduction potential of BMP2, various combinations have been introduced. Applying the combination of BMP2 and L-PRF leads to the early resolution of medication-related osteonecrosis of the jaws (MRONJ) [12]. L-PRF combined with open flap debridement augments the periodontal healing of chronic periodontitis patients by increasing BMP2 release [13]. Alternatively, PRF might serve as a carrier for transplanted cells producing BMP2 [14]. PRF targets pristine mesenchymal cells, becoming a potential source of BMP2 [15]. PRF from rabbits [16] and humans [17] may even release BMP2, but this finding has not been confirmed by proteomic analysis [18]. The content of TGF-β in a PRF preparation, however, could be responsible for its clinical activity. Therefore, the question of whether PRF can stimulate the expression of BMP2 in potential target cells remains.
This question is reasonable, as TGF-β1 is highly abundant in solid PRF [18] and is a known agonist of BMP2 expression in mesenchymal cells; for instance, recombinant TGF-β1 has been reported to increase BMP2 expression in bone marrow mesenchymal cells [19]. These findings indicate that TGF-β1 may modulate the BMP2-dependent autocrine/paracrine activity of the target cells. However, knowing that PRF contains TGF-β1 does not mean that PRF is synonymous with TGF-β activity. PRF is more complex than a single growth factor, and whether TGF-β activity accounts for the overall effects of PRF, and to what extent, should be based on experimental evidence. One strategy that allows the determination of TGF-β activity of PRF is based on blocking TGF-β receptor 1 kinase with SB431542 in a bioassay using mesenchymal cells [18][20][21].

We recently performed a proteomic analysis of PRF lysates showing the presence of the classical growth factor TGF-β1, but neither of the BMP family members was identified [18]. We next examined our data from another independent proteomic analysis of the total PRF clots based on mass spectrometric analysis. This analysis confirmed the presence of TGF-β1 and the lack of BMP2 and other members of the BMP superfamily in the PRF lysates. The PANTHER classification system revealed 1791 GO terms and 1269 functional hits (Figure 1A). The molecular functional regulator (GO:0098772) contained 126 genes with 126 functional hits (Figure 1B). For example, receptor regulator activity (GO: 0030545) contains nine members: transforming growth factor-β1 proprotein, platelet basic protein, follitropin subunit β, platelet factor 4 variant, ectodysplasin A, choriogonadotropin subunit β3, platelet factor 4, C-C motif chemokine S, and choriogonadotropin subunit beta variant 1. Subsequently, REVIGO analysis reduced the visualized gene ontology to 350 terms. Among the 1791 proteins identified, only a were few growth factors, e.g., TGF-β1, insulin-like growth factor II, myeloid-derived growth factor, epidermal growth factor, and hepatocyte growth factor-like protein, which were enriched in the intercellular signal molecule class (PC00102, Figure 1C). Taken together, the proteomic signature of PRF membranes confirmed the absence of BMPs. However, there is reason to assume, based on in vitro studies with recombinant TGF-β1 [19] and the strong TGF-β activity found in PRF lysates [18][20][21], that these growth factors are capable of inducing the expression of BMP2. 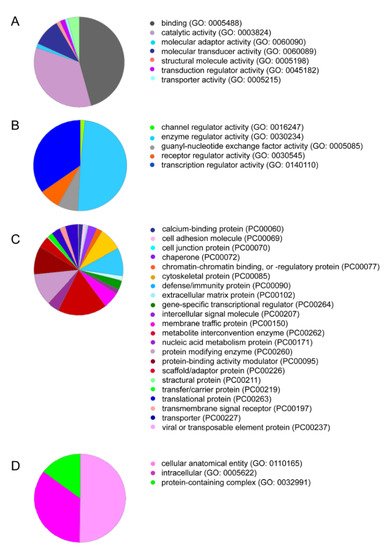 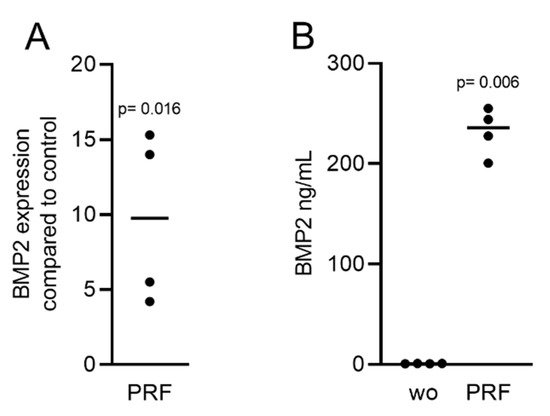 Figure 2. RT-PCR and immunoassays triggered by solid PRF lysates confirmed the presence of BMP2. Gingival fibroblasts were stimulated with 30% soluble PRF lysates. (A) Reverse transcription PCR analysis for BMP2 is indicated; (B) The levels of BMP2 in the supernatant of the fibroblasts are presented as ng/mL. n = 4. Statistical analysis was performed with a two-tailed t-test. p values are reported comparing the PRF group with the untreated control. Here, and throughout this study, significance was set at p < 0.05. ”wo” indicates without and represents unstimulated cells. 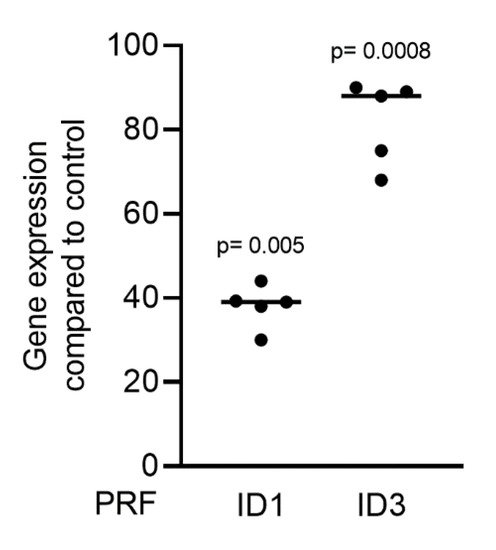 Figure 3. PRF lysates activate the TGF-β and BMP2 target genes ID1 and ID3. Gingival fibroblasts were treated with 30% soluble PRF lysates. PCR analysis of ID1 and ID3 is indicated. n = 5. Statistical analysis was performed with a Kruskal–Wallis test for multiple comparisons. p values are reported comparing the PRF group with the untreated control.

Figure 4. A TGF-β receptor I kinase antagonist blocks BMP2 and its corresponding genes. Gingival fibroblasts were stimulated with PRF lysates in the absence or presence of the TGF-β receptor I kinase antagonist SB431542 (10 µM). PCR analysis for (A) BMP2, (B) ID1, and (C) ID3 gene expression is presented. n = 5. Statistical analysis was performed with a two-tailed t-test.

Considering that TGF-β stimulates Smad1 phosphorylation in a variety of cell lines [20][21] and that TGF-β receptor 1 kinase mediates TGFβ-induced Smad1/5 and Smad2/3 phosphorylation in chondrocytes [22], we wondered whether PRF lysates can activate the BMP-related Smad1/5 signaling pathway apart from the known potent activation of Smad3 canonical TGF-β signaling [18][23]. Support for this claim came from our observations that PRF lysates caused weak phosphorylation of Smad1/5 in serum-starved cells while SB431542 and LDN193189 blocked the phosphorylation (Figure 5). PRF also initiated robust translocation of Smad1/5 into the nucleus in gingival fibroblasts (Figure 6). These data suggest that PRF lysates have at least a modest effect on the activation of canonical BMP-related Smad1/5 signaling. In support of this assumption, LDN193189, an inhibitor of BMP type I receptor signaling (ALK2/3), significantly suppressed the expression of the BMP2, ID1, and ID3 genes after treatment with PRF in gingival fibroblasts (Figure 7A–C), Thus, PRF lysates and TGF-β1, independent of the presence of BMPs, have BMP-like activity. 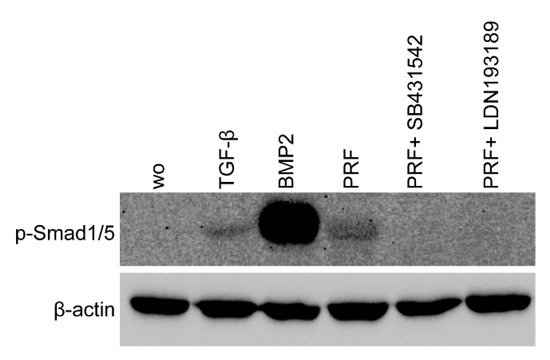 Figure 5. PRF lysates activated the phosphorylation of Smad1/5, which was reduced by treatment with a BMP2 inhibitor. Gingival fibroblasts were exposed to 30% PRF lysate or BMP2 overnight in the presence or absence of SB431542 and LDN193189. Western blot analysis showed a clear increase in the basal Smad1/5 phosphorylation signal in PRF lysates. However, in combination with SB431542 or LDN193189, the signal diminished. ”wo” indicates without and represents unstimulated cells.

Figure 6. The PRF lysate attenuated the translocation of Smad1/5 from the cytoplasm into the nucleus. Gingival fibroblasts were exposed to TGF-β and BMP2 as positive controls and PRF in the presence or absence of SB431542 and LDN193189. Immunofluorescence analysis of the intracellular translocation of Smad1/5 into the nucleus is presented. ”wo” indicates without and represents unstimulated cells.

Figure 7. A potent ALK2/3 inhibitor can block BMP2 and ID genes. Gingival fibroblasts were exposed to PRF lysates in the presence or absence of 100 nM LDN193189. PCR analyses for (A) BMP2, (B) ID1, and (C) ID3 gene expression are presented. n = 5. Statistical analysis was performed with the two-tailed t-test.

Considering that the clinical applications of PRF include liquid PRF [24][25], and similar to our previous approach to identify the role of TGF-β activity in these various fractions [23], we determined the effects of lysates from platelet-poor plasma (PPP), buffy coat (BC), heated PPP (Alb-gel), and the remaining red clot on the expression of BMP2 in gingival fibroblasts. Consistent with the recent observation that PPP and BC, but not Alb-gel and red clot lysates, have TGF-β activity [23], we now show that this pattern is also valid for BMP2. Lysates of PPP and BC caused an increase in BMP2 expression in gingival fibroblasts based on the RT-PCR and immunoassay results (Figure 8A,B). As expected, further confirmation of the typical regulation of the ID1 and ID3 genes by TGF-β/BMP after treatment with liquid PRF lysates indicated upregulation of these genes (Figure 9A,B). Thus, not only lysates from solid PRF but also the respective liquid fractions drive the expression of BMP2 in gingival fibroblast cells of the mesenchymal lineage.

Figure 8. RT-PCR and immunoassays triggered by liquid PRF confirmed the expression of BMP2. Gingival fibroblasts were exposed to PPP, BC, Alb-gel, and RC fractions. (A) PCR analysis for BMP2 is indicated; (B) The levels of BMP2 in the supernatant of fibroblasts in the presence of PPP and BC are presented as ng/mL. n = 4. Statistical analysis was based on the Kruskal–Wallis test for multiple comparisons. ”wo” indicates without and represents unstimulated cells.

Figure 9. PRF lysates activate the expression of BMP2 and related genes ID1 and ID3. Gingival fibroblasts were treated with PPP, BC, Alb-gel, or RC, and TGF-β was used as the positive control. PCR analyses for (A) ID1 and (B) ID3 are presented. n = 5. Statistical analysis was based on the Kruskal–Wallis test for multiple comparisons.