Olfactory neuroblastoma (ONB), also known as esthesioneuroblastoma, is a rare malignant tumor arising from the olfactory neuroepithelium of the superior nasal cavity. First described by Berger in 1924, it accounts for approximately 2–3% of tumors of the nasal cavity, without any race or gender predilection. It is divided by the Hyams’ histologic grading system in low-grade (Hyams I-II) and high-grade (Hyams III-IV) tumors, the first characterized by a lobular architecture with a minimal or absent mitotic activity and the presence of pseudorosettes, the second by the gradual loss of the lobular architecture, a more represented mitotic activity, and the emergence of necrosis.

In fact, substrates for their development can be the different tissues covering nasal cavities and paranasal sinuses, such as mucosal epithelium , serous gland epithelium, mesenchymal tissues, cartilage, neural/neuroectodermal tissues, hemato-lymphoid cells, and the odontogenic apparatus. Epithelial tumors are the most common form and originate from the epithelial lining, accessory salivary glands, neuroendocrine tissue, and olfactory epithelium. Conversely, mesenchymal tumors derive from the supporting tissue [1].

Most newly diagnosed TuNSs are locally advanced or metastatic cancers, not suitable for radical treatments. Surgery represents the mainstay of treatment and every patient with a diagnosis of TuNSs, independently from their histology, should be evaluated by a surgeon in the context of a multidisciplinary team [2]. In clinical practice, the most frequent five histotypes of TuNSs include squamous cell carcinoma, lymphoepithelial carcinoma, undifferentiated nasal-sinus carcinoma (SNUC), adenocarcinomas, and neuroendocrine tumors. Currently, scientific efforts are oriented to gaining better knowledge of the tumorigenic pathways and to defining alternative treatment strategies.

Occupational exposure to wood dust, leather, flour, tissue, and other industrial compounds (chromium and nickel), exposure to glues, formaldehyde, and organic solvents are shown to have a causal role in the development of TuNSs in several studies. For this reason, TuNSs are officially recognized as “occupational diseases” [3][4][5][6][7][8][9]. A report [10] showed a significant increase in the risk of developing TuNSs in patients exposed to wood dust with an odds ratio (OR) of 1.72 (CI 95%: 1.16–2.56) adjusted for many relevant risk factors, including tobacco smoking. Only a few scientific works demonstrated that benign nasal diseases may represent an additional risk for the development of nasal cavity/paranasal sinus (NCPS) or nasopharyngeal cancers, but these data need to be confirmed [11][12][13][14] (Table 1).

The 2012 World Health Organization (WHO) classification system divided TuNSs into different histological categories based on the site of origin and their clinical behavior [15] with 5-year overall survival ranging from 22% to 67%. TuNSs include a great variety of histologic subtypes. They can be subdivided into squamous cell carcinomas, lymphoepithelial carcinoma, neuroendocrine carcinomas or undifferentiated sinonasal carcinomas (SNUC), adenocarcinomas intestinal-type (ITAC) and not intestinal-type (NON-ITAC), adenocarcinomas salivary-type, neuroendocrine tumors (NENS), and more rarely, adenoid cystic carcinomas and olfactory neuroblastomas (esthesioneuroblastomas) [16][17][18][19]

Squamous cell carcinoma is the most common form of TuNSs (3%) [4][9]. It is divided into keratinizing and non-keratinizing subtypes and generally arises from the maxillary sinus and nasal cavity. Other rare variants of squamous cell carcinoma of the nasal cavities and paranasal sinuses are papillary cancer, basaloid carcinoma, sarcomatoid carcinoma, adenosquamous carcinoma, and acantholytic cancer. Another possible variant of squamous carcinoma is the “NUT midline carcinoma” (NMC), a rare form of undifferentiated carcinoma with a clinical aggressive behavior and chromosomal rearrangements of the NUT (nuclear protein in testis) gene, at 15q14 [20][21].

The 2005 WHO classification defined undifferentiated sinonasal carcinoma as a very aggressive, undifferentiated, and not EBV-associated carcinoma [22][23][24]. Histologically, it appears as undifferentiated medium-large cells neoplasia, arranged in nests and in a trabecular or solid pattern. It has a strong mitotic activity, frequent areas of necrosis, and invasion of lymph-vascular spaces. SNUC must be distinguished from lymphoepithelial carcinoma and neuroblastoma of the olfactory tract, which is negative for the expression of cytokeratins.

Intestinal-type adenocarcinoma (ITAC) has histological features similar to adenoma and colorectal adenocarcinoma from which it must be differentiated (Figure 2). ITAC originates from areas of intestinal metaplasia of the Schneiderian mucosa, which covers the sinus-nasal district. It is the most frequent type of adenocarcinoma, accounting for 6% to 13% of sinonasal malignancies. It affects more frequently male subjects (male:female ratio up to 6:1) 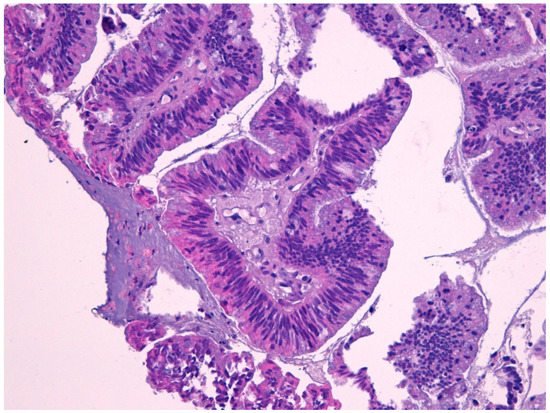 Macroscopically, it appears more often as an exophytic, polypoid, or papillary lesion, sometimes jelly-like. They are also described in the literature as rare examples of ITAC combined with small cell neuroendocrine carcinoma [28]. The presence of cytological atypia, high mitotic index, and areas of necrosis are helpful in the distinction of ITAC from either benign lesions, such as mucocele, or non-intestinal type adenocarcinomas with a low grade of histological malignancy. The absence of squamous differentiation distinguishes ITAC from mucoepidermoid carcinoma and adenosquamous carcinoma [30][31][32][33].

Non-intestinal sinonasal adenocarcinomas (non-ITAC) are a rare and heterogeneous group of undifferentiated tumors, sharply different from salivary histotypes. They can be further distinguished into low- and high-grade forms. Conversely, low-grade non-intestinal adenocarcinomas are located preferentially in the nasal cavities and ethmoidal sinus of adult subjects. In fact, they need to be distinguished from benign lesions, such as adenomatoid epithelial respiratory hamartoma and mucinous serum hamartoma.

Salivary adenocarcinomas originate from seromucous glands of the nasal cavity and paranasal sinuses, as well as from the surface epithelium. They show a cribriform architecture in about 50% of the cases, while in the remaining cases they have a solid or tubular architecture. Sinonasal salivary-type carcinomas include different tumor types such as adenoid cystic carcinoma, mucoepidermoid carcinoma, acinic cell carcinoma (Figure 3A,B), myoepithelial carcinoma, epithelial-myoepithelial carcinoma, polymorphous low-grade adenocarcinoma, and carcinoma ex-pleomorphic adenoma [34][35][36]. The less common form is the mucoepidermoid carcinoma, representing about 5% of sinonasal glandular tumors [34][37].

First described by Berger in 1924, it accounts for approximately 2–3% of tumors of the nasal cavity, without any race or gender predilection. Molecular analysis shows overexpression of the Drosophila achaete-scute gene (hASH1) involved in immature olfactory neuronal development and in neuroendocrine differentiation. Prognostic factors and specific guidelines for ONB treatment are not well-defined, mainly due to the rarity of these neoplasms and the scarcity of studies with large case numbers. So far, treatment schemes include surgery, radiation therapy, and chemotherapy (as adjuvant or neoadjuvant) in various combinations [41].

Sometimes, they become symptomatic when they extend to surrounding tissues with worsening abnormal nasal congestion, obstruction of a nostril, persistent epistaxis, nasal muchorrea, anosmia, abnormal protrusion of the eyeball, diplopia or loss of vision, ear pain or compression feeling, continuous tearing, headache, masses into nose and/or palate, neck lymph node enlargement, unexplained face distortions, etc. For example, about the precise site of origin, carcinomas arising from the nasal cavity show a better prognosis than those from the paranasal sinuses, likely because nasal carcinomas give rise to symptoms (e.g., nasal obstruction or epistaxis) coming earlier to clinical attention [42][43][16][17][18][4][8][44][45]. In particular, maxillary sinus tumors are associated with 30–70% survival rate at 5 years after appropriate surgical excision; however, this value quickly drops to 10–20% in the case of unresectable disease [46][47][48][49][50]. They rarely involve locoregional lymph nodes (such as submandibular and laterocervical nodes) and even less frequently give distant metastases which are more typical of the undifferentiated tumor.