The estrogen estradiol is a potent neuroactive steroid that may regulate brain structure and function. Although the effects of estradiol have been historically associated with gonadal secretion, the discovery that this steroid may be synthesized within the brain has expanded this traditional concept. Indeed, it is accepted that de novo synthesized estradiol in the nervous system (nE2) may modulate several aspects of neuronal physiology, including synaptic transmission and plasticity, thereby influencing a variety of behaviors. These modulations may be on a time scale of minutes via non-classical and often membrane-initiated mechanisms or hours and days by classical actions on gene transcription. Besides the high level, recent investigations in the cerebellum indicate that even a low aromatase expression can be related to the fast nE2 effect on brain functioning. These pieces of evidence point to the importance of an on-demand and localized nE2 synthesis to rapidly contribute to regulating synaptic transmission. This review is geared at exploring a new scenario for the impact of estradiol on brain processes as it emerges from the nE2 action on cerebellar neurotransmission and cerebellum-dependent learning.

Estrogens are part of the neuroactive steroid family that may regulate the structure and function of neural networks via multiple modes and time courses. The most potent estrogen in influencing brain functions is the 17 beta-estradiol that exerts its effect via both classical long term actions on genomic mechanisms and rapid non-classical effects [1][2][3][4][5][6][7]. The estradiol impacts on neural physiology depend on its bioavailability in a brain structure, and it has been shown that, in addition to peripheral synthesis such as in the gonads, the estradiol can be locally produced in the nervous system [8]. The de novo synthesized 17 beta-estradiol in nervous tissues, defined as neurosteroid (nE2), has the same structure and mechanisms of synthesis than the gonadal derived estrogen (Figure 1). 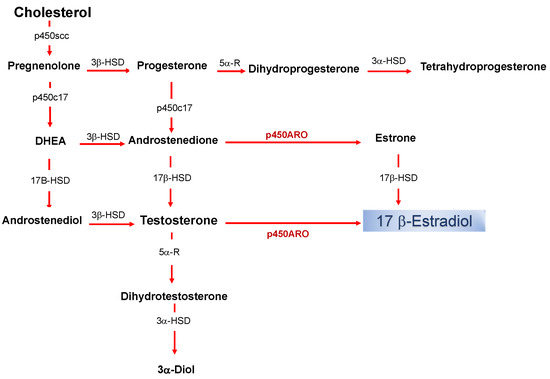 The production of nE2 requires an aromatase-dependent conversion of testosterone, which may be either of the peripheral origins or locally synthesized from the precursor cholesterol [9][10][11][12]. Thus, estradiol is no longer merely considered a hormone produced by the ovaries and only related to the control of female sexual maturation and reproduction. Instead, it is now known to have multiple homeostatic roles, and in the nervous system, estradiol controls a variety of processes in males as well as females [2][13][14][15][16]. Via the “classical” genomic mode of action, estradiol interacts with intracellular receptors to influence transcriptional pathways and regulate DNA transcription within minutes (Figure 2) [17]. 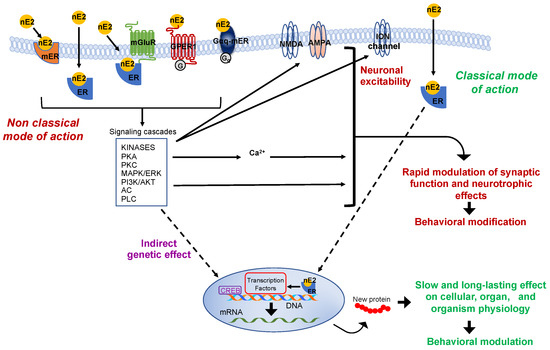 Two typical estrogen receptor isoforms (ERs: ERα, ERβ) are known to participate in classical influence. However, to produce detectable functional effects on the cellular level or the entire organism, the “classical” mode of action requires post-transcriptional events that take hours to days to occur [7][18][19]. In the brain, faster non-classical and often membrane-initiated mechanisms are observable within a few seconds (for some electrophysiological effects) to minutes after estradiol activated signaling involving intracellular cascades that may include several protein kinases and result in cytoplasmatic fluctuations of calcium concentrat (Figure 2) [19][20][21][22][23][24]. Some of these intracellular signalings could also affect the gene transcription through the so-called “indirect genetic effect” (Figure 2) [25]. However, the essential point considered here is that estradiol may rapidly modulate pathways associated with the regulation of neurotransmission and neuronal activity such as those related to cytoplasmatic protein kinases cascades and calcium fluct (Figure 2) [23][26].

Rapid membrane-initiated effects involve estrogen G-protein-coupled receptors (GPCRs: GPER-1 and Gαq-mER), classical estrogen receptors (ERα, ERβ), and probably other putative receptors (e.g., ER-X) [27][28][29][30][31][32][33][34][35]. It is noteworthy to mention that non-classical estrogen actions on neural circuits are not limited to those that occur via the activation of membrane-associated estradiol pathways, but also include mechanisms that can depend on the estrogen binding of cytoplasmatic receptors with the consequent activation of various intracellular signaling cascades (Figure 2) [36].

It has been established that nE2 may be a potent regulator of the neuronal functions when produced in large amounts [4][37]. However, how generalized nE2 synthesis is within the nervous system and whether some of the nE2 effects can be even mediated by low estradiol production are issues of rising interest in neurophysiology and neuroendocrinology.

Recent evidence showed that besides the high level of synthesis, even alleged minute and localized nE2 production might contribute to rapidly modulating aspects of neuronal physiology like the synaptic transmission and plasticity (Figure 2).

Experiments conducted in the brainstem and cerebellum indicate that despite the supposed low synthesis in the experimental models used, nE2 may contribute to rapidly modulating neurotransmission via dynamic change of its availability at a synaptic level [38][39][40][41][42]. It has already been demonstrated that modifications in local estradiol synthesis may be achieved by changes in aromatase activity. Although possible changes in aromatase activity result from transcriptional control that alters the enzyme concentration, these changes generally occur slowly in a time scale of hours or days. Alternatively, much more rapid changes in the rate of nE2 production may result from post-translational events that potentiate/inhibit the enzyme activity (Figure 3) [38]. 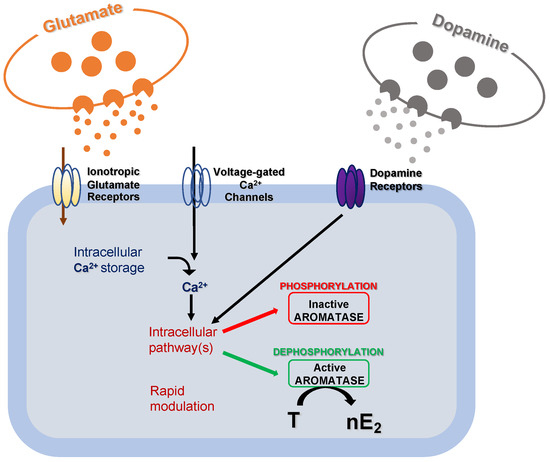 Figure 3. Schematic cartoon representing the post-translational mechanisms modulating aromatase activity. Fluctuations in intracellular calcium (Ca2+) concentration, along with glutamatergic and dopaminergic signals, might rapidly modulate intracellular pathways to regulate aromatase activity via phosphorylation/dephosphorylation processes. As a result, the transformation rate of testosterone (T) into 17 beta-estradiol (nE2) may be rapidly regulated.

Post-translational modifications are common mechanisms involved in the control of protein activity in the brain, like in the case of the regulation of neurotransmitter activity in neurons [43].

The evidence introduced above provides new insight into the effectiveness of nE2 in regulating neuronal activity and indicating that estradiol may play an essential role in the modulation of network functioning, even in brain structures in which, so far, its synthesis has been assumed to be too low to be effective. Here, we review the emerging view from this scenario that expands the traditional significance of nE2 production into a new physiological role and includes recently suggested mechanisms involved in the rapid control of the neural transmission, with particular regard to the synaptic transmission in the cerebellum.

2. The Effectiveness of the de Novo Synthesized Estradiol in Rapidly Influencing the Neuronal Functioning

It has long been assumed that the impact of nE2 on the regulation of neural functions should be restricted at those brain areas in which the estradiol synthesizing enzyme aromatase is highly expressed and, of course, estrogen receptors are present. According to this assumption, in such areas, nE2 may rapidly reach high concentrations [4][44][45], bind membrane ERs, or activate other non-classical mechanisms to initiate intracellular signaling and acutely influence the neuronal physiology [13][21][33][36][46]. Rapid activation of membrane estrogen pathways by nE2 may be facilitated by the co-localization of aromatase and estrogen receptors in the plasma membrane or their localization at the synaptic level in
neurons of the central nervous system [47][48][49]. Non-classical influences include, but are not limited to, the modulation of synaptic activity, synaptogenesis, and spinogenesis (Figure 2) [23][50][51]. Rapid functional regulation of synaptic activity by estradiol has been found, so far, for the glutamatergic, GABAergic, cholinergic, and dopaminergic systems [27][41][42][52][53][54][55][56][57]. Of course, also classical genomic delayed effects influencing neuronal structure and function can be mediated by nE2 and interact with the non-classical mode of actions [2][13][19]. nE2 may, therefore, regulate over different timescale phenomena such as synaptic transmission, spine density, synaptic connectivity, synaptogenesis, and neurogenesis, that mediate behavioral changes (Figure 2) [13][20][21][27][58][59].

In many vertebrates, brain areas with the highest aromatase expression include hypothalamic preoptic nuclei, the bed nucleus of the stria terminalis, and medial amygdala, typically involved in the control of stress responses, sexual and social behaviors [2][58][59][60] and other structures that, like in the case of the hippocampus and inferior olive, are related to sensorimotor aspects of information processing and learning phenomena [44][61][62][63][64]. Consistently, besides its role in the regulation of reproduction and sexual functions [1][2][65][66][67], nE2 may influence a variety of other processes and behaviors from the mood to learning and memory formation and have a neuroprotective role as well [14][27][50][52][68][69][70][71][72][73][74][75][76].

However, despite a significant interspecific variability, low aromatase expression may be present in other brain areas such as temporal, occipital, and cingulate cortex, putamen, brainstem, and cerebellum of adult animals including rodents and humans [64][77][78][79][80].

Rodents are the most used model to study brain functions. For instance, in the cerebellum of rodents, aromatase is highly expressed only during neonatal life while it is maintained at a constant low level during peripubertal (the period between day 30 and day 45 after birth) and adulthood (post-pubertal) [64][81][82]. Thus, while the role of nE2 in regulating cerebellar development has been investigated [83][84], its effects upon the functioning of the cerebellum in adults (in the following text, the term “adult” refers to a period comprehensive the peri and post-pubertal period) have long been considered irrelevant or ignored.

Nevertheless, the age-related maintenance of a low level of aromatase expression in the cerebellum seems to have a cardinal physiological significance in the contribution of controlling the cerebellar function. Recent reports showed that nE2 synthesis rapidly influences the glutamatergic transmission between the parallel fibers and Purkinje cells in the cerebellar cortex and acutely impact cerebellar dependent behaviors in adult rodents [39][40][72][85]. Furthermore, the high level of estrogen receptors found in the cerebellum of adults is supportive of cerebellar responsiveness even to a minute and localized nE2 synthesis [86][87][88].

The above-reported findings are consistent with previous discoveries indicating an acute modulation of nE2 on glutamatergic synapses in vestibular nuclei, which are assimilable to extra cerebellar nuclei and have, like the cerebellum, a low level of aromatase expression [41][42][64][89][90][91]. Thus, even at low expression, aromatase may play a functional role in allowing the brain to exert dynamic control over local neuronal functions via nE2 synthesis, as may be the case of synaptic transmission and plasticity in the cerebellar circuitry.