As of March 2020, the World Health Organization (WHO) stressed the need for coordination and direction of global research work towards the development of treatment strategies for coronavirus disease 2019 (COVID-19) [1]. Subsequently, many large clinical trials were carried out, aiming to identify and test the safety and effectiveness of potential therapeutics against the virus [2][3][4][5][6]. Despite the substantial efforts, only a few drugs, such as dexamethasone (an agent with anti-inflammatory rather than antiviral properties) and remdesivir, have been associated with a more favourable disease trajectory [2][4][7][8][9]. Furthermore, a recently published, international randomized trial by the WHO reported that the most widely proposed drugs have had little or no effect on overall mortality of hospitalized patients with COVID-19 [10].
Plitidepsin, a marine cyclic depsipeptide investigated more for its anti-tumour rather than antiviral activity, lately emerged amongst many other candidates as a new therapeutic option for COVID-19 [11][12].

Plitidepsin is an agent initially studied for its anti-tumour properties (i.e., cell cycle arrest, apoptosis and growth inhibition) [13]. Its antineoplastic activity emerges not only from antiproliferative but also from antiangiogenic (i.e., inhibition of vascular endothelial growth factor secretion) effects [13][14][15][16]. The primary intracellular target of plitidepsin seems to be eukaryotic translation elongation factor 1 alpha 2 (eEF1A2), one of two different isoforms of eukaryotic translation elongation factor 1 (eEF1A). eEF1A2 is responsible for the enzymatic delivery of aminoacyl tRNAs to the ribosome, but also has noncanonical pro-oncogenic activities. Via its inhibition, the drug is engaged in numerous cell actions, such us regulation of oxidative stress, control of unfolded protein degradation by the proteasome, heat shock response and actin building and cytoskeleton reorganization [17][18]. Concerning plitidepsin’s impact on the cell cycle, Alonso et al. [19] presented a dual effect in human melanoma cells, with it being cytostatic at low concentrations and cytotoxic at higher concentrations.

Ex vivo studies of SARS-CoV-2 and pancoronaviral interactomes identified 332 host proteins interacting with the virus at crucial stages of its life cycle [20][21]. Existent drugs were investigated as “host-directed agents”, targeting these host proteins [21]. Examples include ralimetinib (a p38/MAPK inhibitor) and drugs targeting the eukaryotic translation machinery, like zotatifin (an inhibitor of eukaryotic initiation factor eEIF4A, the partner of eEIF4H that interacts with SARS-CoV-2 Nsp9), plitidepsin and its molecular derivative, ternatin-4 (an eEF1A inhibitor) [22][23].
With regard to plitidepsin, which belongs to the above analysed drug category, White et al. [23] demonstrated that it possesses antiviral activity against SARS-CoV-2 by inhibiting the activity of eEF1A. They proved that the expected anti-SARS-CoV-2 activity of plitidepsin could be mitigated when using a mutated version of eEF1A in 293T cells (A399V mutation), suggesting the factor as a druggable target [23]. eEF1A is used by RNA viruses for mRNA translation by being involved in both the enzymatic delivery of aminoacyl tRNAs to the ribosome and the aminoacylation-dependent tRNA export pathway [24]. It has also been previously identified as an important host factor for the replication of the single-stranded RNA influenza virus, respiratory syncytial virus and certain transmittable coronaviruses [25][26][27][28]. In the case of SARS-CoV-2, and through targeting eEF1A, plitidepsin inhibits the translation of the open reading frames (ORF) ORF1A and ORF1B, leading to reduced production of polyproteins (pp) pp1a and pp1ab, hence conducing to a decreased quantity of replicative non-structural proteins, such as RNA-dependent-RNA-polymerase [29]. It also inhibits the translation of different subgenomic mRNAs, resulting in insufficient production of viral structural and accessory proteins [29]. The lack of necessary viral proteins, such as RNA-dependent-RNA-polymerase, as well as structural proteins simultaneously prevents the virus from generating copies. Figure 1 illustrates the exact mechanism of the drug’s integration into the SARS-CoV-2– host cell interactions [24][30][31]. 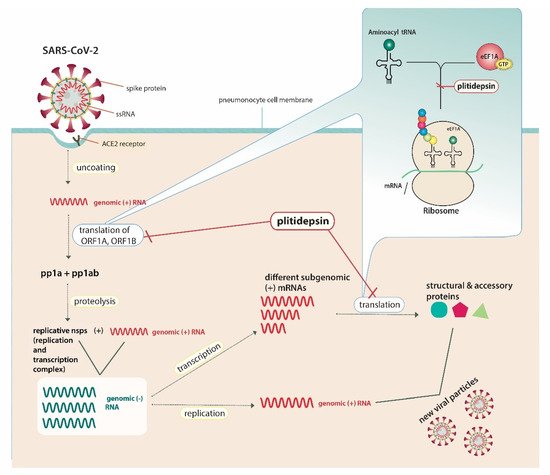 Figure 1. Plitidepsin’s host-directed anti-SARS-CoV-2 action mechanisms.SARS-CoV-2 possesses a single-stranded RNA (ssRNA) genome. The angiotensin converting enzyme-2 (ACE2) receptor is identified as the cell-surface receptor of SARS-CoV-2. Specific spike protein interactions with ACE2 receptors promote viral fusion with the cellular membrane. After entry, uncoating of the viral genomic RNA is followed by the translation of two large open reading frames (ORF), ORF1A and ORF1B. The resulting polyproteins, pp1a and pp1ab, are proteolyzed into non-structural proteins (nsps) that form the viral replication and transcription complex. This complex includes, amongst others, RNA-processing and RNA-modifying enzymes, such as RNA-dependent-RNA-polymerase, and drives the production of negative-sense RNAs ((−) RNAs). In general, the positive-sense genome can act as messenger RNA (mRNA) and can be directly translated into viral proteins, whereas negative-sense RNA is converted (via RNA-dependent-RNA-polymerase) into positive-sense RNA in order to be translated. Genomic RNA contains the necessary RNA regions required for genome replication and translation. During replication, full-length (−) RNA copies of the genome (genomic (−) RNAs) are used as templates for genomic (+) RNAs. During transcription, various subgenomic RNAs are produced through discontinuous transcription, where subgenomic (−) RNAs are synthesized by combining varying lengths of the 3′ end of the genome with the 5′ leader sequence necessary for translation. Subgenomic (−) RNAs are then transcribed into subgenomic (+) mRNAs. Resulting structural and accessory viral proteins are combined with genomic (+) RNAs to produce new viral particles, which will be secreted from the infected pneumonocyte by exocytosis. Through targeting the host cell’s eukaryotic translation elongation factor (eEF1A), plitidepsin inhibits the host-mediated translation of ORF1A, ORF1B and subgenomic mRNAs, leading to decreased production of viral pp1a and pp1ab andnsps, including RNA-dependent-RNA-polymerase, as well as structural and accessory proteins. Abbreviations: SARS-CoV-2, severe acute respiratory syndrome coronavirus-2; ssRNA, single-stranded RNA; ACE2, angiotensin converting enzyme-2; ORF, open reading frame; mRNA, messenger ribonucleic acid; tRNA, transfer ribonucleic acid; eEF1A, eukaryotic translation elongation factor 1; GTP, guanosine triphosphate; pp, polyprotein.

To date, relapsed/refractory MM constitutes the main indication for plitidepsin’s use. Preclinical evidence has suggested that the drug has both in vivo and in vitro anti-MM properties [32]. This activity of plitidepsin was further investigated by clinical trials, solely or in combination with established anti-MM agents, including dexamethasone, in patients with relapsed/refractory MM [33][34][35].
Due to its limited benefit, several concerns were raised as to whether the drug should be authorized; thus, plitidepsin was not universally approved. To date, the combination of plitidepsin with dexamethasone is authorized only in Australia and solely for patients with relapsed/refractory MM after a minimum of three prior treatment regimens [36]. On the contrary, the European Medicines Agency’s (EMA) Committee for Medicinal Products for Human Use refused the authorization of Aplidin® (plitidepsin’s trademark) even for this subset of patients [37]. Nevertheless, as of October 2020, EMA returned the marketing authorization application for Aplidin®, and further evaluation of the drug will follow [38].

Due to its antiproliferative and selective cytotoxic properties in experimental models of human leukaemia cell lines and fresh leukaemia cells, as of 2003, plitidepsin was granted orphan designation by the European Commission for treatment of acute lymphoblastic leukaemia [39]. In this case, the drug should be reassessed in clinical trials before receiving marketing authorization.
Several phase I and II clinical studies have also evaluated plitidepsin in patients with lymphomas; these have estimated safe doses of the drug, also confirming feasibility of its combination with other anti-tumour agents [40][41][42].

According to preclinical evidence, plitidepsinappears to act as an antiproliferative agent in melanoma cell lines while presenting synergistic activity with dacarbazine, a drug used for treating metastatic melanoma [19]. Nevertheless, studies carried out to evaluate the efficacy and safety of plitidepsin in patients with locally advanced or metastatic malignant melanoma revealed only a limited clinical benefit [43][44]. On this basis, the drug was not included in 2019 European Society for Medical Oncology (ESMO) Clinical Practice Guidelines for treatment of this malignancy [45].

Plitidepsin’s safety profile has been extensively studied over both phase I and II/III trials, with the drug presenting mostly transient and tolerated adverse events. Myalgia, alanine aminotransferase/aspartate aminotransferase and creatine phosphokinase increase, as well as fatigue, nausea and vomiting, constituted the most common dose-limiting toxicities in phase I studies [34][41][46][47][48]. Regarding phase II/III studies, the same adverse events were reported, along with mild to moderate hematologic abnormalities, such as anaemia and thrombocytopenia [33][35][43].A hypersensitivity reaction was also observed; the event was well-tolerated with the exception of one patient that was withdrawn from a trial due to a grade 4 hypersensitivity reaction and hypotension [43].
A particularly well-studied drug combination among patients with relapsed and refractory multiple myeloma consisted of plitidepsin with dexamethasone [33][34][35]. Even though the combination was associated with a mildly increased incidence of muscular events and creatine phosphokinase elevations, the safety profile is altogether acceptable [33]. Notably, plitidepsin with dexamethasone was related to less hepatic enzymes abnormalities compared to plitidepsin alone [33], while a study assessing the combination of plitidepsin with dexamethasone and bortezomib reported no dose-limiting adverse events [34]. Consequently, the drug is considered safe and well-tolerated, both as a monotherapy and as a combination with dexamethasone; hence, it is already authorized for use in patients with relapsed/refractory MM in Australia [36].

Plitidepsin, a drug currently authorized only in Australia for patients with refractory multiple myeloma, has exhibited anti-SARS-CoV-2 properties, through inhibiting the elongation factor eEF1A, a component of the eukaryotic host cell’s translation machinery. On the basis of accumulating preclinical and only preliminary clinical data, plitidepsin currently represents a promising repurposed candidate drug against COVID-19 requiring hospitalization. However, current clinical evidence is inadequate for plitidepsin’s use in COVID-19 patients, while several issues, such as its efficacy against variants and its purposing only for moderately affected hospitalized patients, remain to be addressed. In an urgent necessity for more antiviral agents, that also retain activity against the constantly spreading SARS-CoV-2 variants and as pandemic conditions are changing, carefully designed, multicentrerandomized controlled trials, potentially further studying separate subgroups of patients infected by new strains, are warranted. Thus, plitidepsin’s role may be readdressed in a subcategory of COVID-19 patients that might benefit from the drug, satisfying a personalized approach of these patients in the future.