Somaclonal variation includes genetic or epigenetic changes exhibited between clonal regenerants and their corresponding donor plants derived via in vitro tissue cultures (A. Leva, L.M.R. Rinaldi, in Encyclopedia of Applied Plant Sciences (Second Edition), 2017). It usually assumes that the changes are being transmitted during a generative cycle. However, in some cases, to stress the fact that not all changes are either not analyzed in the progeny or may not be sexually transmitted, the tissue culture-induced variation seems to reflect better the issue (Quantification of the tissue-culture induced variation in barley (Hordeum vulgare L.) Bednarek, PT., Orłowska, R., Koebner, RMD., Zimny, J. 2007 BMC Plant Biology 7 (1), 1-9).

2. Stresses and Their Role in Plant Regeneration through Tissue Culture In Vitro

3. Cell Wall and Plasma Membrane as Sensors of Stresses

It is becoming evident that nuclear genes’ transcription regulation may be modulated by plastid gene expression [157][158][159]. Such regulation is called retrograde signaling. The reversed interaction when nucleus genes influence plastids’ genome functioning is called anterograde [160] (Figure 1). 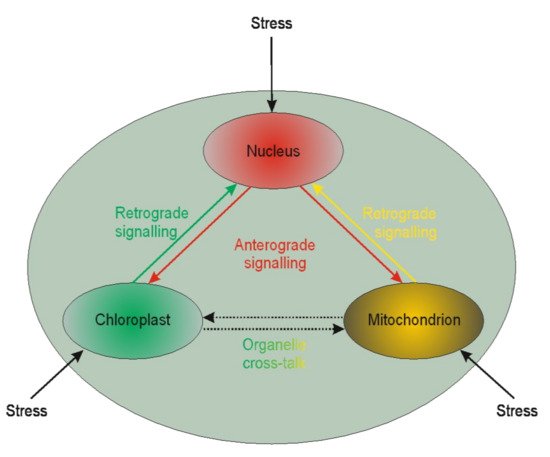 Figure 1. Schematic illustration of the interplay between cellular organelles. Anterograde is the signaling from the nucleus towards chloroplasts or mitochondria, whereas the reversed direction is called retrograde signaling. The communication between mitochondria and chloroplast (and other organelles except but nucleus) is called cross-talk.
Little is known of the two interactions in the context of microspores. The available literature is devoted chiefly to chloroplasts. Based on chloroplast biogenesis, retrograde signaling could be divided into “biogenic” and “operational” signals. The “biogenic signals” are the signals exhibited during early chloroplast development, whereas the “operational signals” are related to chloroplasts’ normal function in mature plants. Based on the signals’ origin, the retrograde signaling pathways in chloroplasts may include tetrapyrroles biosynthesis, redox state, chloroplast gene expression, reactive oxygen species, and protein import into plastids. The retrograde signaling pathway was described in barley mutant albostrians, which lacks plastid ribosomes and shows reduced amounts and/or activities of nuclear-encoded plastid proteins (the small subunit of ribulose-1,5-bisphosphate carboxylase⁄oxygenase (Rubisco), ferredoxin NADP+ reductase, and enzymes of the Calvin cycle) [161]. Inhibition of tetrapyrrole biosynthesis and plastid gene expression activity resulted in the moderated expression of nuclear starch biosynthesis genes in tobacco [162]. It is well known that in vitro plant regeneration involves stressful conditions that induce chloroplast proteome remodeling. Nuclear factors regulate chloroplast gene expression, and this form of anterograde regulation has roles in plant adaptation to abiotic stress [163]. Furthermore, retrograde and anterograde signaling was demonstrated in barley in the case of albino plant regeneration via androgenesis [164][165]. The other line of evidence suggests that retrograde mitochondrial signaling may also be essential for plants. For instance, mitochondria have been proposed to play a vital role in programmed cell death (PCD) in anther tapetum cells. PCD is crucial during anther development providing lipids coating pollen exines [166]. The role of PCD in the tapetum was also demonstrated in sunflower [167]. However, it could not be excluded that such similar signaling may act for anther cultures. Thus, the retro and anterograde signaling pathways may affect organelle functioning’s biochemical level, linked to epigenetic aspects of the in vitro tissue culture-induced variation.

Another layer that is being affected by in vitro tissue culture plant regeneration relates to biochemical pathways. The available data indicate that callose present in the subintinal layer [168] of microspores may affect the Krebs’ cycle via complex II involved in the electron transport chain (ETC) [67]. Problems with ATP synthesis may disturb the Yang cycle [169], followed by DNA methylation problems [170] and induction of mutations [171], and possibly activation of transposable elements (TEs) [172]. Indirectly, the Yang cycle is responsible for spermine and spermidine synthesis [173]. The compounds may participate in gene expression regulation [174]. Furthermore, the Yang cycle is essential for the cell’s glutathione synthesis as an antioxidant reagent preventing modification of, for example, methylated cytosines. It was documented that glutathione significantly improved plant regeneration via anther culture in the rye [100]. Possibly, that disturbances in the Krebs’ cycle may change fatty acid synthesis (Figure 2). Fatty acids may influence, for example, gene transcription [175] and glycolysis. Furthermore, glycolysis could be disturbed under carbon starvation stress [176]. Thus, in vitro tissue culture plant regeneration is a complex, multidimensional process affecting all cell functioning levels. Understanding the relationships among all of the system’s components is vital for the elaboration of knowledge-based approaches of in vitro plant regeneration and regulation of the levels of somaclonal variation. 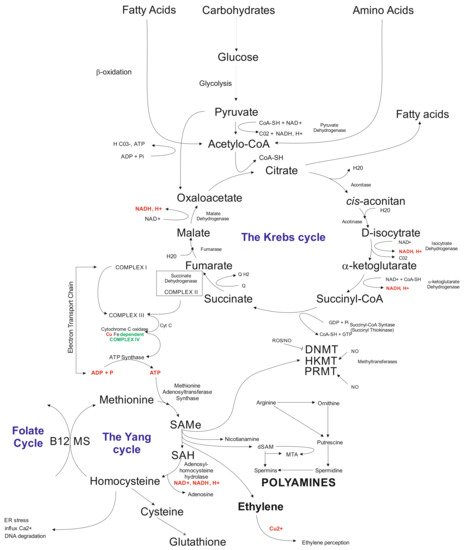