Glaucoma, a leading cause of irreversible blindness globally, is a degenerative optic neuropathy characterized by progressive visual field defects corresponding to retinal ganglion cell and retinal nerve fiber layer (RNFL) degeneration [1][2]. Primary open-angle glaucoma (POAG) represents the most common form of glaucoma worldwide, responsible for nearly three-quarters of all cases of glaucoma [1]. POAG is a form of disease characterized by an anatomically open angle; in contrast to primary angle-closure glaucoma (PACG) where anatomic changes obstruct aqueous humor outflow from the anterior chamber, in POAG, drainage of aqueous humor out of the anterior chamber is obstructed despite an anatomy that should allow for aqueous drainage [3]. An elevated intraocular pressure (IOP) represents the major and only currently approved modifiable risk factor for glaucomatous disease onset and disease progression [4]. However, not all patients with glaucoma have elevated IOP, and not all patients with elevated IOP develop glaucoma. Therefore, the pathogenesis of glaucoma is still not fully understood and likely differs among persons and populations.
As researchers have tried to explore and better understand the multifactorial nature of glaucoma, many studies have sought a genetic explanation for the disease. Genetic and genomic studies of single-gene variants, whole-exome sequencing, genome-wide association studies (GWAS), and genetic/polygenic risk scoring have all been used to describe genetic contributions to glaucoma and to evaluate the role of genetics as a risk factor for disease [5]. In addition to these studies, scientists have tried to evaluate the heritability of glaucoma.
Heritability, represented by h2, is a complex statistical measurement ranging from zero to one that describes what percent of variability in a trait is due to genetic factors versus environmental factors [6]. For example, characteristics such as language and political ideology have a heritability close to zero—indicating that these characteristics are almost entirely influenced by environmental factors with no genetic influence. Meanwhile, traits caused by single-gene mutations, such as phenylketonuria, have a heritability close to one, indicating that variability in this trait is almost entirely the result of genetic influence [7]. Glaucoma represents a complex, multifactorial trait with a quantifiable genetic influence, and therefore h2 estimates for glaucoma fall between zero and one [8].
In 2019, Asefa et al. conducted a systematic review and meta-analysis of glaucoma heritability, and the heritability of glaucoma-related endophenotypes. For glaucoma specifically, their search yielded six studies—three specifically for POAG, two for unspecified glaucoma, and one for PACG—and their pooled h2 for POAG ranged from 0.17 to 0.81 [8]. Meanwhile, their pooled h2 estimates for POAG endophenotypes included h2 estimates for IOP (h2 = 0.43), anterior chamber size (h2 = 0.67), central corneal thickness (CCT) (h2 = 0.81), cup-to-disc ratio (CDR) (h2 = 0.56), disc size (h2 = 0.61), cup size (h2 = 0.58), corneal hysteresis (h2 = 0.40), RNFL thickness (h2 = 0.73), cup shape (h2 = 0.62), and peripapillary atrophy (h2 = 0.73) [8].
Since glaucoma is a multifactorial disease, heritability estimates of specific glaucoma endophenotypes and risk factors may be more important clues for researchers as to which endophenotypes, and in turn molecular mechanisms, are important to the pathogenesis and progression of disease. While these estimates for glaucoma and endophenotype heritability are generally strong, the majority of genetic variants underlying these traits are still unknown. Additionally, the molecular etiology of these endophenotypes, and their role in the pathogenesis of glaucoma, is similarly unclear. For instance, it has been suggested that IOP and vertical CDR (VCDR) may represent the true POAG endophenotypes, while CCT may not be physiologically significant, but the molecular mechanisms underlying genetic contributions to these traits are not well understood [9][10].

Elevated intraocular pressure represents the only currently approved modifiable risk factor for POAG. While the exact molecular mechanisms underlying elevated IOP and its relationship to glaucoma are not fully understood, it is well known that elevated IOP is strongly associated with both structural and functional glaucomatous change [3][11]. Currently, this relationship is described by mechanical strain that elevated IOP places on the lamina cribrosa and adjacent optic nerve tissues, ultimately resulting in structural damage that disrupts axonal transport [3][12]. It has also been suggested that there may be a pressure-induced metabolic stress effect, and even circulatory, immune, and oxidative stress mechanisms associated with glaucoma and related to IOP [3][13][14].
Interestingly, elevated IOP has shown a relatively strong heritability estimate. When Asefa et al. conducted a systematic review and meta-analysis for the heritability of glaucoma, they also evaluated pooled h2 estimates for endophenotypes, including IOP, which they estimated at h2 = 0.43 (95% confidence interval (CI) 0.38–0.48). Importantly, in their analysis, IOP was the most commonly reported endophenotype, reported in 41 different studies. This large sample also allowed for subgroup analysis, showing that there was heterogeneity between age and ethnicity. Findings showing different heritability estimates between White Europeans (h2 = 0.47, 95% CI 0.37–0.57, p = 0.006), East Asians (h2 = 0.49, 95% CI 0.40–0.59), and Other Populations (h2 = 0.30, 95% CI 0.22–0.39) are particularly interesting given suspected genetic contributions to disease and genetic differences among different racial groups [5][8]. Additionally, it should be noted that IOP has also shown a genetic correlation with POAG (odds ratio 1.18, 95% CI 1.14–1.21, p = 1.8 × 10−27) [15].
To date, a wide variety of genes have been associated with elevated IOP, including, but not limited to: ABCA1, ABO, ADAMTS8, ADAMTS17, ADAMTS18-NUDT7, AFAP1, ANGPT1, ANTXR1, ARHGEF12, ARID5B, ATXN2, CAV1-CAV2, CDKN2B-AS1, CELF1, CYP26A1-MYOF, FAM125B, FNDC3B, FOXC1, FOXP1, GAS7, GLCCI1-ICA1, GLIS3, GMDS, HIVEP3, INCA1, LMX1B, LOC171391, MADD, MIR548F3, MYBPC3, NDUFS3, NR1H3, PDDC1, PKHD1, PTPRJ, RAPSN, RPLP2-PNPLA2, SIX1/SIX6, SEPT9, SP11, TFEC-TES, TMCO1, and TXNRD2 [5][16]. It should be noted that all of these genes have not also been independently associated with POAG. Similarly, molecular mechanisms of these genes are generally not well understood (Table 1).
Table 1. Selection of genes associated with IOP and suggested molecular mechanisms.
In 2018, Gao et al. conducted the largest known GWAS for IOP using patients of European Descent (ED) from the UK Biobank (n = 115,486). They identified 671 significant genetic variants associated with IOP, mapping to 149 loci, significantly expanding the known literature and replicating findings from previous studies. Importantly, they specifically identified four significant novel genes: LMX1B, MADD, NR1H3, and SEPT9 [16].
LMX1B is a gene that is directly implicated in the development of serotonergic (5-HT) neurons [21]. According to Ding et al., LMX1B is a LIM homeodomain-containing gene, which they suggest is a key intermediate factor necessary for the cascade of specification and differentiation of 5-HT neurons [21]. In mouse models, the LMX1B transcription factor has been associated with the regulation of anterior segment development, with LMX1B transcripts being identified in the ciliary body and trabecular meshwork (Table 2) [17]. In fact, Pressman et al. described that mice with targeted LMX1B mutations have structural deficiencies in the ciliary body, corneal stroma, and iris [17]. If LMX1B mutations are associated with alterations in the ciliary body and anterior chamber structures, it is logical to consider that aqueous humor dynamics may be altered, leading to elevated IOP and, potentially, POAG, though further evaluation is surely warranted (Figure 1). 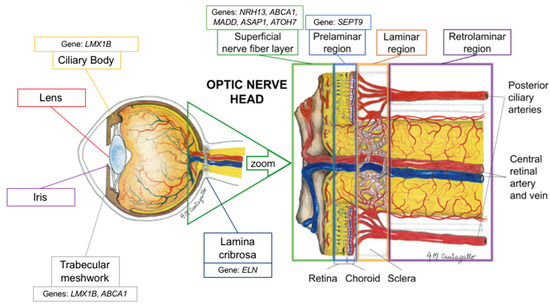