Ionizing radiation has been extensively used for therapeutic and diagnostic purposes of human disease [1][2][3][4][5]. Radiation therapy is regarded as one of the primary treatment options for cancer patients since it is a promising candidate for inoperable cancer and induces apoptosis/necrosis of cancer cells [1][2][3]. Furthermore, ionizing radiation has been extensively used for medical imaging of human disease since it is still considered as an ideal tool for detection of disease and malignancies [4][5]. Even though ionizing radiation is widely utilized for diagnosis/therapy of human diseases, repeated or high dose radiation is closely associated with undesirable effects against healthy cells and tissues since ionizing radiation induces oxidative stress in the surrounding field of irradiation [6][7][8]. Irradiation causes DNA damage and metabolic stress in healthy cells and tissues since it elevates the ROS level not only in disease cells/tissues but also in healthy cells/tissues [7][8]. To overcome these drawbacks, many scientists have investigated the strategy for radioprotection of healthy cells/tissues from irradiation [7][8][9][10]. For example, Liu et al. reported that whey hydrolysate peptides have effectiveness in radioprotection of mice from 60Coγ radiation damage and then prolonged survival time of mice [7]. Otherwise, amifostine is widely used in clinics to attenuate radiation-induced damage [11][12]. However, the side effects of amifostine are also problematic such as severe skin eruption, hypotension, fever/rash, immune hypersensitivity syndrome, and fatigue, etc. [13][14][15][16]. For these reasons, antioxidants efficiently attenuate tissue injury from radiation-induced damage [9][10]. Qin et al. reported that resveratrol inhibits oxidative stress from radiation and then reduces intestinal injury [9]. Epigallocatechin gallate (EGCG) is known to decrease ROS levels, suppress radiation-induced intestinal injury, and then prolong the survival time of mice [10].
Caffeic acid phenethyl ester (CAPE), which is a propolis of honeybee hives, has various biological activities such as antioxidants, anti-allergenic, anticarcinogenic, anti-inflammatory, and immunomodulation [17][18][19][20][21][22]. CAPE has an inhibitory effect against nuclear oxygenation of linoleic acid and arachidonic acid and an effectiveness in the decrease of chemotherapy or radiation therapy-induced damages [17]. Furthermore, CAPE was considered as a strong antioxidant in the biological system [23][24][25]. Nasution et al. reported the inhibitory effect against oxidative stress in brain injury [23]. CAPE also has a protective effect against nephrotoxicity and oxidative kidney damage [24]. CAPE showed an anti-oxidative effect against the experimental periodontitis model, i.e., it decreases the total oxidant status in gingival tissues and then improves therapeutic potential [25]. Especially, the pretreatment of CAPE prior to irradiation of rats effectively protects radiation-induced hepatic or brain injury [26][27]. Chu et al. reported that CAPE administration decreased the serum levels of alanine aminotransferase and aspartate aminotransferase, while the activity of superoxide dismutase and glutathione was increased [26]. Then, CAPE effectively protected from radiation-induced hepatotoxicity and inhibited hepatocyte apoptosis. The pretreatment of CAPE also protects brain damage from ionizing radiation through the control of total oxidant status and oxidative stress index [27].
Nano-dimensional vehicles such as nanoparticles, polymeric micelles, liposomes or colloidal carriers have been extensively investigated in the diverse field of biomedical science [28][29][30][31][32]. Especially, nanoparticles have been frequently considered for stimuli-sensitive drug delivery of bioactive agents, i.e., they can be modified to respond against the stimulus in the biological system such as acidic pH, temperature, magnetic field, oxidative stress, light, and irradiation [32][33][34][35][36][37]. For example, Choi et al. reported that iron oxide-incorporated lipocomplexes respond to the magnetic field, concentrate around the tumor mass, and then specifically target cancer [32]. Polymer conjugates having diselenide linkage can be used to target cancer cells and deliver the cancer drug through reactive oxygen species (ROS)-sensitive cleavage of selenide linkage since the tumor microenvironment normally revealed increased redox potential and elevated ROS level [35]. Choi et al. reported that methoxy poly(ethylene glycol)-b-poly(DL-lactide-co-glycolide) block copolymer nanoparticles having diselenide linkages responded to irradiation and then specifically released ebselen, i.e., they showed that the ebselen release rate was accelerated according to the dose of irradiation [37]. Furthermore, the antibody decorated lipid nanoparticles incorporating CAPE are preferentially target disease cells with low intrinsic cytotoxicity against normal cells [38]. Nanoparticles are reasonable candidates for the delivery of bioactive agents to improve biological activity and to reduce genotoxicity [38][39][40]. 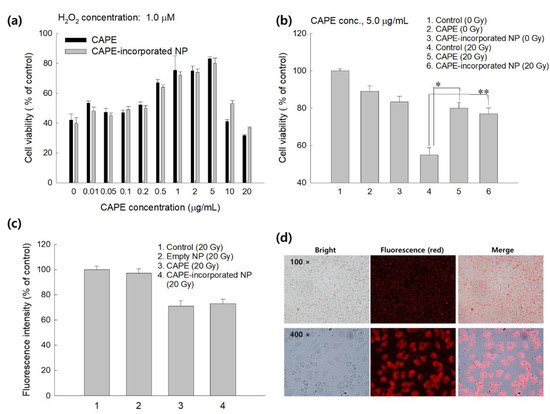 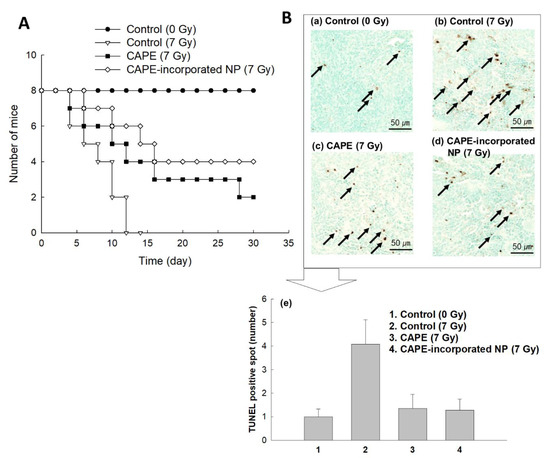 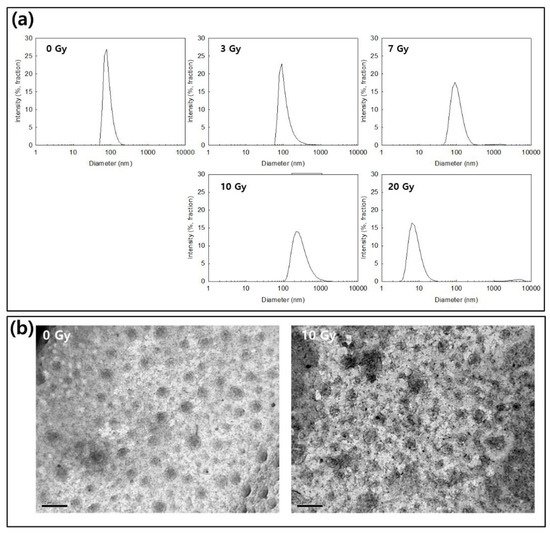 Figure 3. (a) The effect of irradiation on the changes of the particle size of CAPE-incorportaed HAsPBPE nanoparticles. (b) The effect of irradiation on the morphological changes of CAPE-incorportaed HAsPBPE nanoparticles (bar = 200 nm).
Nanoparticulate-based delivery systems for bioactive agents are suitable for eliminating disease cells such as cancer stem cells and ROS [47][48]. For example, polymeric nanoparticles decorated with specific ligands or antibodies have the potential to target and reject cancer stem cells [47]. Furthermore, nanocarriers incorporating the dual or multi drug delivery strategy have a great potential to diminish ROS production in disease cells and then reduce oxidative damage in mitochondria [48]. Then, these dual/multi drug deliveries using nanocarriers may provide a synergistic effect in the improvement of therapeutic index of neuroregenerative strategy [48]. Our concept for radioprotection is to develop radio-sensitive nanomedicine for the sustained and/or radio-responsive release of CAPE. Since CAPE itself is a lipophilic agent and is hardly dissolved in an aqueous solution, nanoparticles can solve these problems, i.e., nanoparticles enable us to dissolve CAPE in an aqueous solution [28]. Furthermore, nanoparticles can be modified to be sensitive to physicochemical stimulus such as radiation, pH, ROS, magnetic field, and light [32][33][34][35][36][37]. HAsPBPE nanoparticles can respond to ROS since the PBPE moiety and thiol group in TbEA in the polymer backbone are known to have ROS-sensitivity and these moieties are able to be decomposed in the oxidative stress [45].
Actually, CAPE-incorporated nanoparticles of HAsPBPE were disintegrated in the presence of H2O2 as shown in Figure 3a,b. HAsPBPE nanoparticles showed an accelerated CAPE release through irradiation (Figure 4). Then, HAsPBPE nanoparticles specifically decomposed and released CAPE when they were exposed to irradiation, i.e., drug release can be suppressed in the absence of irradiation and then irradiation of nanoparticles accelerated drug release. Even though nanoparticles in the in vitro cell culture showed a similar protective activity compared to CAPE, they were improved by the biological activity in the in vivo animal irradiation study, as shown in Figure 2 and Figure 5. 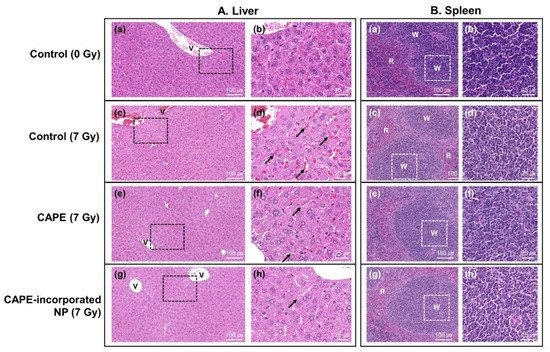