Migraines are a common disease with limited treatment options and some dietary factors are recognized to trigger headaches. Although migraine pathogenesis is not completely known, aberrant DNA methylation has been reported to be associated with its occurrence. Folate, an essential micronutrient involved in one-carbon metabolism and DNA methylation, was shown to have beneficial effects on migraines.

The role of diet in the prevention and treatment of human disorders is still controversial, but many dietary compounds that can contribute to disease pathogenesis have been identified [1]. It is estimated that most human cancers in the USA are caused by external factors and diet (excluding alcohol and food additives) is the main causal external factor responsible for about 35% of cancer-related deaths [2]. Some “familial cancers” are, in fact, not attributed to the same genetic constitution of family members, but rather their similar dietary habits. Therefore, diet should be considered as a possible factor or confounder in the pathogenesis of many diseases. This raises the question of whether diet modification can be important in the prevention and therapy of diseases, not only by the avoidance of dietary elements with recognized detrimental roles in pathophysiology (e.g., an elimination diet), but also by the addition of compounds with specific mechanisms of action.
Headache disorders including migraines, seem to be especially prone to diet as it is generally believed that some dietary ingredients and additives may trigger headache attacks [3][4]. Therefore, using an elimination diet to avoid a migraine trigger may be effective in migraine prevention, but few rigorous studies on the role of diet in headache prevention have been performed and most of them lack appropriate controls (reviewed in [5]). On the other hand, a more comprehensive diet containing specific ingredients can prevent headaches, but this is even more controversial and less studied than the elimination diet (reviewed in [6]).
Many kinds of diet are recommended to reduce risk and attenuate the detrimental syndromes of many diseases. Some diets target specific organs and some address mental and physical well-being [7]. A Mediterranean-style diet and ketogenic diet are some of the most common diets recommended to be beneficial for many human disorders [8][9][10]. However, there are no solid reports on the effect of the Mediterranean diet on migraines, but the ketogenic diet as well as high folate, low fat, modified Atkins, and high omega-3/low omega-6 diets have been reported to have some beneficial effects in the prevention of headaches including those occurring from migraines (reviewed in [6]).
Apart from diets composed of specific food or avoiding specific ingredients, diets targeting specific cellular structures and macromolecules such as mitochondria or DNA have been proposed [11][12]. The epigenetic diet, a term introduced by Hardy and Tollefsbol in 2011, is intended to target the cellular epigenetic profile and specifically mediate its changes induced by environmental factors [13]. The epigenetic diet is mainly considered in cancer prevention [14][15]. However, its rationale is based on the assumptions that diet can modify the cellular epigenetic profile and that changes in the epigenetic profile are important in cancer transformation. Both assumptions are true, but this does not necessarily mean that it is possible to compose a balanced diet specifically addressing a cancer-related, epigenetically aberrant element. Nutrition can change one’s epigenetic profile, but how to specifically regulate one’s profile with this diet is still open as it is also an important question for epigenetic drugs [16].

The Human Genome Project has provided information on the sequence of our genome and mapped most of our genes, but now in the post-genomic era, studies aim to understand how information contained in the gene sequence is turned into a phenotype. As all our nucleated cells contain essentially the same DNA, the control of its expression in different tissues is critical for the development and functioning of our body, and deviation from it may result in disorders including serious diseases. Maintaining cellular identity and function is mostly executed by epigenetic mechanisms that include covalent modifications of genes and associated proteins and do not include changes in DNA sequences. These modifications include DNA methylation/demethylation, post-translational histone modifications, and changes mediated by non-coding RNAs (ncRNAs). The epigenome can be understood as the complement of chemical compounds that modify the expression and function of the genome [17] This complement is referred to as the cellular epigenetic profile and its changes can be considered as epimutations.

Migraines are a common (2013 estimated global prevalence 14.7%) brain disorder with severe headaches and associated neurological and systemic symptoms [18]. Based on the frequency of occurrence, the International Headache Society classifies migraines as episodic or chronic migraines. Migraines may occur in two main clinical subtypes: migraine with aura (MA) and without aura (MO). A migraine aura may precede a headache attack, occur during the attack, or appear without a headache [19].
The aura may include several visual and mental syndromes and is believed to relate to cortical spreading depression (CSD), an important effect in migraine. However, the exact mechanism whereby CSD is initiated is not exactly known, nor is it known how CSD initiates the subsequent phases of migraine. Some possible mechanisms including the activation of the trigeminal nerve and the induction of neurogenic inflammation are presented in Figure 1 [20]. A trigger may be an environmental or lifestyle factor such as stress, a light flash, physical effort, noise, sleep disturbance, or diet [21]. 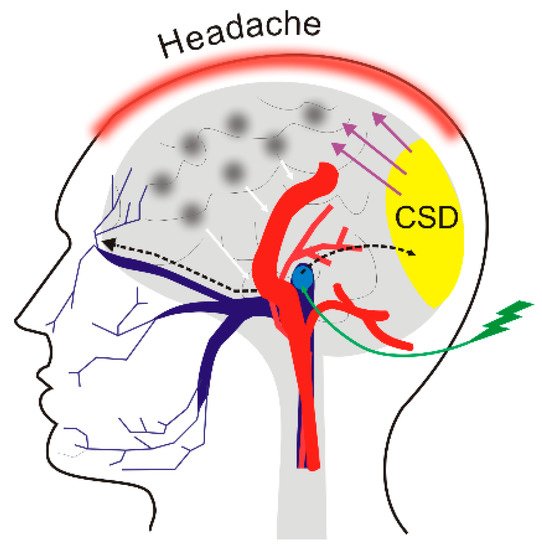 Figure 1. A putative mechanism for migraine headaches induced by a trigger. A migraine trigger (green thunder) affects the nucleus (light blue oval) of the trigeminal nerve (dark blue) and activates it. This results in waves of depolarization (black broken arrows) moving along the nerve and reaching the cortex and evoking cortical spreading depression (CSD). This results in neurogenic inflammation (black clouds) and release of inflammatory neurotransmitters (white arrows), which induce dilation of the brain blood vessels (red), which causes the release of pain-producing prostaglandins that in turn evoke a migraine headache. The specific order of events presented here is hypothetical and requires validation.
Although the prevention and treatment of migraines remain challenging [22], migraine drugs approved by the FDA have lately produced hope for a breakthrough [23] These drugs include erenumab (Aimovig), fremanezumab (Ajovy), and galcanezumab (Emgality), which are all monoclonal antibodies and GRPC antagonists. It is too early to draw a definite conclusion on the general role these drugs may play in migraine treatment, but the first observations are prospective, despite the relatively high cost of therapy with these drugs, estimated at about $575 per month [24].
The pathogenesis of migraine is largely unknown, but both genetic and environmental factors may be involved. These factors can modulate the threshold for a migraine trigger that precedes and evokes a migraine attack [25]. Many potential migraine triggers have been identified and a substantial fraction of them is associated with food (Figure 2). Female sex hormones, the menstrual cycle, and pregnancy modulate migraine attacks, so they may contribute to the approximately three times higher prevalence of migraines in women than in men [26]. This relationship may also be underlined by the X-linked form of this disease or the mitochondrial transmission of its other form or both [27]. 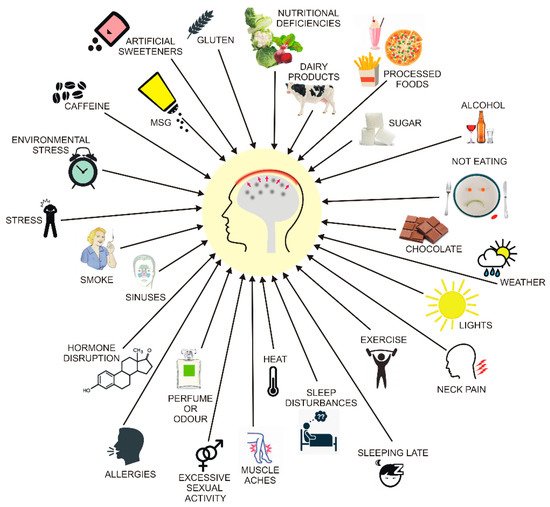 Figure 2. Main migraine triggers. Some are well established and confirmed by reports on large cohorts, but others are problematic and require further research. Recent research suggests that some food triggers are actually food cravings experienced as the first phase of migraine before pain onset. Their action and threshold can be modulated by several environmental and genetic factors that act synergistically.
The genetic basis of migraine is supported by the association of migraine with mutations in a single gene (monogenic migraine) or clusters of genes (polygenic migraine) (reviewed in [28]). Mutations in the three ion channels genes, CACNA1A (calcium voltage-gated channel subunit alpha 1 A), ATP1A2 (ATPase Na+/K+ transporting subunit alpha 2), and SCN1A (sodium voltage-gated channel alpha subunit 1) were identified as specifically causal for hemiplegic migraines, a rare variant of MA, and genome-wide association studies have identified 38 loci associated with increased risk of migraines [29]. Many other genes are candidates of importance in migraine pathogenesis, but a substantial majority of them have not been convincingly replicated [30]. However, these are not genes themselves, but their expression directly determines the migraine’s phenotype. As mentioned, the cellular epigenetic profile is an important element of the regulation of gene expression. Epigenetics is also a significant element of pathogenesis in many human diseases including behavioral and brain disorders [31]. Several chemicals targeting the epigenome have been accepted as drugs or are under clinical trials [32]. Valproic acid (VPA), a histone modifier, has been applied for more than 50 years in epilepsy treatment and is currently used in the therapy of bipolar disease and the prophylaxis of migraines [33][34]. The role of epigenetic modifications in migraine is not completely known, but epigenetics is considered to be a promising avenue in the prophylactic treatment of this disease [35].
The cellular epigenetic profile is more prone to nutritional modifications than corresponding DNA sequence [36]. Therefore, epigenetically active nutrients can affect the pathogenesis of human disorders and nutriepigenomics is also a promising avenue in the prevention and therapy of human complex diseases [1]. This issue seems to be especially important in migraines, as it is frequently related to improper diet, and the avoidance of certain nutrients in the diet is an important element of its prophylaxis and often results in a decreased severity of headaches [37]. Much less is known about the prevention of migraine and the attenuation of its symptoms via the active supplementation of the diet. The ketogenic diet is considered to be a rapid onset effective prophylaxis for episodic and chronic migraines, and ketosis was recently suggested to regulate cellular functions through interactions with the epigenome, but our knowledge of the mechanisms of this interaction is far from complete [38][39]. However, a ketogenic diet is not the only diet that may affect the epigenome as many compounds not included in such a diet are reported to do so [13].
In a large (8042 men and 23,728 women) cross-sectional study on subjects from a population-based NutriNet-Santé e-cohort, Andreeva et al. observed migraine occurrence in 9.2% of men and 25% of women [40]. They also observed lower protein and higher fat consumption in male migraineurs than in males without headaches and those with non-migraine headaches and higher fat and carbohydrate intake in female migraineurs than females without headaches and those with non-migraine headaches. These results indicate a gender-specific difference in the consumption of macronutrients among migraineurs. However, whether this difference contributes to different prevalence of migraine between men and women should be confirmed by further research, as the differences observed in these large cross-sectional studies were not very pronounced. These and other studies show that nutrition may be important in migraine pathogenesis, and this problem should be considered along with other genetic and environmental migraine-related factors. Further details on the role of diet in migraine pathogenesis are provided in the next sections.
In summary, the use of the term “epigenetic diet” is, at present, not fully justified and should not be understood in a similar way to other relatively well established kinds of diets including the Mediterranean diet or ketogenic diet.

5. Folate and Its Role in DNA Methylation and Migraine Pathogenesis

Folate (folacin, vitamin B9) is one of the B vitamins and an essential micronutrient that plays a critical role in one-carbon cellular metabolism [46][47]. Humans, as mammals, cannot synthesize folate and must intake it with food either as a component of a natural diet, or as a fortified food or diet supplement. Folate supplementation, recommended in many countries, can come in the form of folic acid, folinic acid, or 5-methyltetrahydrofolate (5-MTHF). 5-MTHF occurs naturally and has some advantage over synthetic forms of folate including its higher bioavailability [48]. Folate is essential for many cellular effects such as nucleoside synthesis and the methylation of biomolecules including DNA (Figure 3). 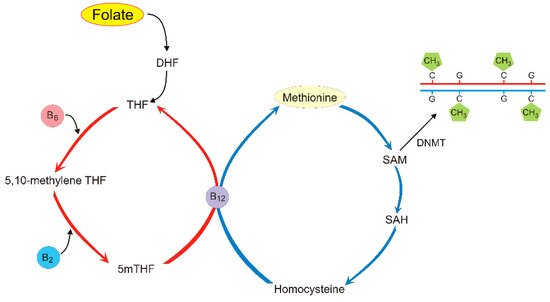