The Tumor Microenvironment (TME) represents an important barrier that can hinder immune responses against tumors and also attenuate immunotherapeutic efficacy.

The TME represents an important barrier that can hinder immune responses against tumors and also attenuate immunotherapeutic efficacy (Figure 1). In situ immune components of tumors, including T cells, B cells, natural killer cells (NK), dendritic cells (DCs), macrophages, granulocytes as well as suppressive regulatory cells subtypes such as regulatory T cells (Tregs), regulatory B cells (Bregs), and myeloid-derived suppressor cells (MDSCs), play crucial roles in the host cancer immunosurveillance system, although their contribution varies between tumor types and among patients with the same cancer [1]. The type, density, and location of immune infiltrates within a tumor have been suggested to have a clinical prognostic impact [2]. Importantly, the infiltration of T cells, particularly CD8+ T cells, have has been shown to correlate with augmented responses to immunotherapy and improved survival [3][4][5]. 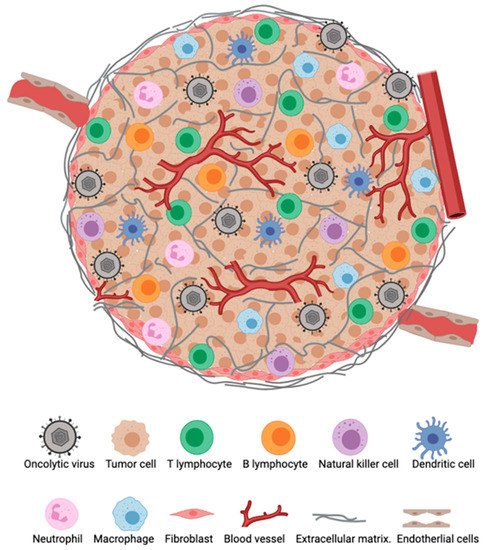 Figure 1. The tumor microenvironment (TME). Major cellular constituents of the TME during oncolytic virotherapy (OVT).
Tumors can be classified as immunologically “hot” or “cold” [4][6]. “Hot” or inflamed tumors have an abundance of infiltrating T cells and molecular signatures of immune activation and are usually responsive to immunotherapy [1]. By contrast, “cold” tumors are defined to have limited number of infiltrating T cells and are not sufficiently primed for immune recognition [1]. These cold tumors often contain Tregs, Bregs, and MDSCs, which prevent cytotoxic immune cells from penetrating into the TME [1]. Therefore, turning a cold tumor hot is essential and may significantly enhance the therapeutic efficacy of cancer immunotherapies. Unfortunately, only a minority of patients with hot cancers seem to respond and benefit from immunotherapies like checkpoint blockers, cancer vaccines and CAR-T cells. To improve clinical outcomes in patients with a variety of cancer types, significant efforts are currently undertaken to combine immunotherapies themselves or with traditional cancer therapies, such as chemotherapy, radiation therapy, or surgery [4].
The generation of an anti-tumor response involves a cyclic process referred to as the cancer-immunity cycle [7]. This cycle begins with liberation of neoantigens generated as a result of spontaneous immunogenic cell death, chemotherapy, radiation, and/or OVT among others. The released neoantigens are captured and processed by antigen-presenting cells (APCs), which migrate to the draining lymph nodes to prime and activate tumor-specific T cells. Tumor-specific T cells traffic to and infiltrate the tumor bed where they recognize and kill cancer cells. The killing of cancer cells releases additional tumor antigens, fueling the cancer immunity cycle.

2.2. Interactions of oHSV with the Tumor Vasculature

Tumor vasculatures restrain the migration of immune cells from reaching tumor targets through the expression of immunosuppressive ligands and the downregulation of adhesion molecules [61]. Studies on how oHSV-derived OVT disrupts tumor-induced vasculature has demonstrated mixed results. On one hand, studies have shown a direct anti-angiogenic effects of oHSV [62]. Although most of the reported anti-angiogenic oHSV vectors are armed with angiostatic factors or angiogenesis inhibitors. One example is the oHSV RAMBO (rapid antiangiogenesis mediated by oncolytic virus). Hardcastle et al. hypothesized that incorporating an extracellular fragment of the brain-specific angiogenesis inhibitor 1 (BAI1), vasculostatin (Vstat120), in RAMBO would counter the downregulation of thrombospondin 1 (TSP-1) and the increased cysteine-rich 61 (CYR61) integrin activation in the TME, thereby enhancing the anti-tumor efficacy [63]. Indeed, RAMBO treatment promoted significant anti-tumor and anti-angiogenic responses over the control virus, in the treatment of mice bearing intracranial and subcutaneous gliomas. In addition, RAMBO-treated tumors showed a significant reduction in tumor microvessel density (MVD) and vascular volume fraction (VVF) [63]. Similarly, Tsuji et al. demonstrated that treatment with T-TSP-1, an oHSV armed with human TSP-1, reduced tumor MVD and exerted an enhanced anti-tumor efficacy against human gastric cancer in vivo [64].
On the other hand, other reports have suggested that oHSVs induce pro-angiogenic responses [65][66]. The downregulation of TSP-1, an anti-angiogenic factor, and the increased expression of CYR61, a pro-angiogenic factor, in infected cells are some of the limitations of the neovascular responses associated with oHSV infection [65][66]. When taken together, there is no clear census regarding the anti-angiogenic or pro-angiogenic nature of oHSV vectors.

2.3. Interactions of oHSV with the Extracellular Matrix of Tumors

The extracellular matrix (ECM) of tumors controls a number of important regulatory processes central to tumor pathology [67]. However, its function as a barrier to prevent viral replication and spread has motivated a number of groups to manipulate the ECM as a component of OVT [68][69][70][71][72][73]. These efforts include the exogenous addition of enzymes to degrade the ECM during OVT and the engineering of novel viruses that express matrix degrading enzymes. The molecular makeup of the ECM can be unique to each tumor. As such, the approaches to disrupt the ECM as a component of OVT may not represent a “one size fits all” solution. Further, ECM remodeling proteins such as matrix metalloproteinases (MMPs), while generally understood to be protumoral, can have anti-tumoral effects depending on individual tumor characteristics [74]. Bearing this in mind, a number of groups have been successful incorporating ECM-targeting approaches for OVT.
Building on earlier work that demonstrated exogenous addition of matrix metalloproteinase 9 (MMP9) in neuroblastoma cells enhanced oHSV spread [68], Sette et al. created a novel oHSV that expresses MMP9 (KMMP9) [75]. MMP9 degrades Type IV collagen which is present in the ECM of glioblastoma multiforme (GBM). KMMP9 possessed enhanced spread in GBM spheroids and treatment of intracranial mouse xenografts with KMMP9 resulted in increased survival compared to xenografts treated with control non-MMP9 expressing-virus [75].
Mckee et al. demonstrated that targeting collagen using bacterial collagenases enhanced efficacy of OVT in melanoma xenograft models [71]. Bacterial collagenases were introduced intratumorally, coincident with MGH2, an oHSV vector. The combined effect was enhanced intratumoral spread of virus and significantly reduced tumor growth rates.
In brain tumors many CSPGs are upregulated and this upregulation is associated with the enhanced pathogenicity of these tumors. Sugar modifications on CSPGs are responsible for limiting diffusion in the ECM. Dmitrievea et al. reasoned that removal of these moieties with a bacterial enzyme, chondroitinase ABC (chase-ABC), would facilitate replication and spread of oHSV through CNS tumors [70]. To this end, they engineered an oHSV (OV-Chase) to express Chase-ABC. OV-Chase significantly enhanced replication and spread through subcutaneous gliomas, reduced tumor growth rates and increased survival in mouse glioma xenografts.
More direct approaches have been taken to subvert the ECM barrier to viral replication and spread through tumors. E-cadherin is a molecule that facilitates cellular adhesion through nectin-1. Nectin-1 is the predominant receptor for HSV-1 infection and the addition of E-cadherin was hypothesized to directly increase viral infection and spread by promoting receptor binding [69]. This group engineered an oHSV (OVCDH1) to express human E-cadherin. OVCDH1 exhibited enhanced spread through GBM cells in vitro, reduced tumor growth rates in vivo and enhanced survival in xenograft and immunocompetent models of GBM.
Most studies of the effect of manipulating the ECM on OVT efficacy have focused on viral replication and spread. There has been relatively little effort spent to look at the effect manipulating the ECM during OVT has on immune cell infiltration. The above study is particularly interesting in this respect, as they examined the effect of E-cadherin on infiltrating NK cells, macrophage, microglia and T-cells. Perhaps due to an increase in cytolytic activity of OVCDH1 this group noted an increase in NK cell infiltration into tumors after OVCDH1 treatment versus control virus treatment. No other differences in immune cell infiltration were observed between OVCDH1 and control groups.
Finally, while the above groups demonstrated that overexpression of ECM proteins can benefit OVT efficacy, Mahller et al., reasoned that inhibition of ECM protein activity may benefit OVT [72]. This group hypothesized that, as the function of many ECM protein activities are pro-tumoral, using a virus to express TIMP-3, a matrix metalloprotein inhibitor, might benefit oHSV-derived OVT. TIMP-3, tissue inhibitor of MMPs 3, is an inhibitor of all MMPs. Treatment with TIMP-3 reduced tumor growth rates in a number of cancer models [76][77][78]. Using this rationale, Mahller et al., engineered the G207 oHSV (described below and in Table 1) to express TIMP-3 and called it rQT3. Compared to control virus which expresses luciferase, treatment of neuroblastoma and malignant peripheral nerve sheath (MPNST) xenografts with rQT3 was superior at reducing tumor growth rates and enhancing survival.
Table 1. Summary of HSV-derived Oncolytic Viruses Discussed.