The yield of eggplant is much lower in two major growing countries, India and Bangladesh than the global average. Nearly 80% of the eggplant production area is cultivated by small, marginal, and resource-poor farmers in India [1]. These cultivators are vulnerable to environmental production constraints such as irrigation shortages and infestations of insects and diseases. By contrast, the growing eggplant in developed countries is quite ‘high-tech’ with the control of temperature, light, irrigation, hormone applications, and by using improved varieties adapted to the specific cultivation environment.

Eggplant is a versatile crop that is well-adapted to different agro-climatic environments. Thus, it is exposed to a number of insects and diseases that cause significant economic loss. In the tropics and subtropics, the eggplant fruit and shoot borer (EFSB), Leucinodes orbonalis, is the single most devastating insect causing up to 65% yield loss [2]. The EFSB larvae (especially third- and fourth- instars) bore into tender shoots, resulting in the plant ultimately wilting and becoming unable to bear fruits. In addition, the larvae bore into fruits, making them unmarketable. The occurrence of the pest inside the plant body saves them from insecticidal contact. Escaping from insecticides and a lack of natural resistance in cross-compatible species make EFSB the major eggplant pest. Furthermore, eggplant fruit borers (Helicoverpa armigera), stem borers (Euzophera perticella), hadda beetles (Epilachna vigintiopunctata), as well as some sucking aphids and parasitic nematodes (Meloidogyne spp), are important pests affecting eggplant cultivation.
Soil pathogens can also pose a significant obstacle to eggplant cultivation, particularly when the soil moisture content is high. Wilting caused by a number of fungal genera such as Fusarium, Verticillium, Rhizoctonia, Sclerotium, and Phytophthora cause considerable loss in crop yield. Wilts are characterized by the yellowing of foliage and drooping of the apical shoot to the ultimate death of plants. Infection of Pythium spp, Phytophthora parasitica, R. solani, and Sclerotium rolfsii causes sudden wilting of seedlings in nursery beds. Besides, bacterial wilts caused by Pseudomonas solanacearum are of economic significance [3].
Aphid-transmitted viral disease (caused by Potato Virus Y) exhibits mosaic mottling of the leaves and stunting of plants. Plants show stunted growth with deformed leaves. Among other viruses that affect eggplant are the Cucumber mosaic virus, Potyvirus, Eggplant mottled crinkle virus, and Alfalfa mosaic virus. The little leaf disease of eggplant is caused by mycoplasma and is transmitted through sap by insects. The plants show chlorosis in young leaves which are followed by axillary bud proliferation. The affected plants show a reduction in the above-ground plant parts, such as leaves and nodes with a bushy appearance. In cases of severe infection, the plants become sterile, and flower and fruit setting are negligible. The affected plants are severely stunted. The disease has been reported from all eggplant growing areas. Diseased plants virtually do not produce any marketable fruits and overall cause up to 90% yield losses in certain cases.

Climatic conditions are extremely important for the optimal growth of eggplant and better-quality fruits. Drastic variation in climate conditions negatively affects eggplant in terms of production as well as quality (Figure 1). It has been reported that exposure to salinity stress at an early stage significantly reduces the fruit yield in eggplant [4]. The optimal temperature for the growth and development of eggplant ranges from 22 °C to 30 °C. Eggplant is very sensitive to cold temperatures. Low temperature during winter limits root growth, reduces plant vigor and produces deformed fruits. The plant is very susceptible to severe frost. Temperatures above the optimal temperature limit plant growth, increase flower drop and poor fruit settings, reduce productivity, and damage quality. Drought also reduces photosynthesis and the subsequent growth of plants. It has been reported that the effect of transient drought can be as devastating as continuous drought on yield in many crops [5]. Despite being transient, early water shortage can significantly stifle plant growth, and the impact of this was found to be negative on photosynthetic capacity, even when normal conditions are restored [6]. At the field level, such transient drought episodes may occur, even in many intensive eggplant cultivation areas due to irrigation water shortage (e.g., reduced water flow in the river, lowering groundwater level). The simultaneous exposure to drought and heat (common in field conditions) significantly reduces the quality (bitter-tasting fruits) and marketability (poor color formation and sun scalding, the formation of brown areas on fruit surfaces that are exposed to the sun) of the fruit. Heat and drought stress promotes the development of a fungal disease on eggplant, which spreads rapidly through the crop. Eggplant is a high-water plant, though it does not withstand waterlogging. Exposure to waterlogging causes defoliation and flower dropping and accelerates pathogen infestation associated with the wilting and rotting disease. 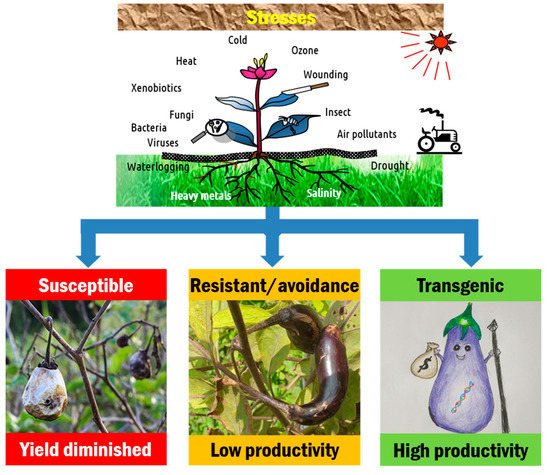 Figure 1. Stress, response, and production potential of crops. Most high-yielding cultivars are poorly adapted to environmental extremes, while landraces are able to tolerate or avoid stresses and are low-yielding. Due to poor recombination of these desirable traits through conventional hybridization, direct introduction of a single or several genes (transgenic) to modern cultivars conferring stress tolerance would be a feasible solution to sustain yield under changing agricultural conditions.
Due to global climate changes and various anthropogenic activities, the occurrence of environmental stresses that limit yield is frequent in major eggplant-producing areas. These include a rise in temperature, reduced rainfall, and river flow, increased salinity, and a shift in rainfall patterns [7]. The occurrence of abiotic stresses such as drought and temperature vary unpredictably across different years and within fields. As eggplant is moderately sensitive to some of these stresses, there is an urgent need of its genetic improvement to withstand stress throughout its life cycle in order to meet the necessary economic threshold. This is particularly important for developing countries like Bangladesh, China, and India, where subsistent farmers are the major eggplant producers.

2. Quality and Other Issues

Eggplant fruits contain the highest amount of chlorogenic acid (5-O-caffeoyl-quinic acid, or CGA) among major vegetables, fruits, and plant products, providing significant amounts of CGA to the diet [8]. CGA is beneficial to human health for its antioxidant, anticarcinogenic, anti-inflammatory, cardioprotective, antiobesity, and antidiabetic properties. Nevertheless, there is a wide variation in eggplant CGA content, ranging from 0.15–2.8% by dry weight. Some wild relatives of eggplant, such as S. incanum, contain much higher levels of CGA. These have raised interest in the development of new ‘healthier’ eggplant varieties with high CGA content. Several breeding strategies have been proposed for this, including exploitation of the natural variation, development of hybrids with good agronomic and commercial characteristics, as well as interspecific hybridization to introgress favorable alleles from the wild species into the genetic background of cultivated eggplant.
The absence of seeds in most fruits generally is appreciated by consumers both of fresh consumption and in processed form. Seedlessness is a major quality trait of the fruits when seeds are hard or exhibit a negative taste. The commercial ripeness of eggplant fruits precedes its physiological maturity. Thus, the presence of seeds considerably depreciates the value of fruits for both the fresh and the processed market. The presence of seeds causes a faster and more intense browning of the fruit flesh upon cutting. Additionally, increased synthesis of saponin and solasonin compounds is observed to cause a bitter taste and a harder flesh [9]. Thus, seedlessness can increase the palatability of eggplant to consumers. Seedless parthenocarpic eggplant has been produced through the inclusion of natural mutants [10] in the modern breeding program and genetic engineering. However, the non-genetic approach, such as spraying plant growth regulators, is the most commonly applied procedure.

Cultivated eggplant has been primarily subjected to intensive breeding programs, in China, India, Bangladesh, Western Europe, Turkey, and Japan, with intensive production of this crop. Many open-pollinated as well as F1 hybrids, with differentiated phenotypes, are the result of breeding works held in the last thirty-plus years. The main breeding objectives are yield or tolerance to biotic and abiotic stresses (waterlogging, drought, low or high temperatures, salinity), and improvement of quality (uniformity, intense color, lack of prickles). However, cultivated eggplant genotypes often have insufficient levels of resistance to biotic and abiotic stresses. Genetic resources of this species have been assessed for resistance to its most serious diseases and pests [11]. The attempts at crossing eggplant with its wild relatives had limited success due to sexual incompatibilities.
Somaclonal variation is a possible way of exploiting genetic variation induced in vitro. In eggplant, somaclonal variants for resistance to atrazine [12] and culture filtrate of Verticillium have been reported [13][14]. In vitro induction of mutation has been successful by applying dimethilsulfonate in meristem culture [15]. The mutant progeny showed a number of variations in morphologic traits. For example, some lines exhibited superior fruit productivity in comparison to control. Heritable somaclonal variations in leaf and fruit shapes have been reported in plants derived from somatic embryos induced by 2,4 D or NAA [16]. However, the practical application of somaclonal variation in eggplant is still limited.
Conventional approaches to breeding crop plants with improved pest resistance and abiotic stress tolerances have so far met limited success due to their laborious and time-consuming nature. On the other hand, high-yielding varieties generally require high input and are not well adapted to environmental extremities. Until recently, improved tolerance of most high-yielding varieties to abiotic stress has been achieved by crossing with landraces or wild relatives. In general, the introduction of genes to high-yielding varieties for conferring tolerance to abiotic stresses through crossing with landraces typically shows poor recombination [17]. Abiotic stress tolerance genes may be linked with undesirable traits, such as low yield, and are eliminated during selection for higher yield. Some cultivars are adapted to grow in a particular (narrow) season and are able to avoid stresses. These may have a small share of the overall productivity of a geographic area. Direct introduction of a single or several genes (transgenic) to modern cultivars would be feasible to confer tolerance to stress factors and sustain yield under stress conditions (Figure 1). Transferring of gene(s) from heterologous species provides the means of selectively introducing/modifying new traits into crop plants and expanding the gene pool beyond what has been available to conventional breeding approaches. Plant genetic transformation offers the opportunity for breeding various crops through complementing or accelerating conventional breeding methods [18]. Genetic engineering approaches have been applied to the eggplant. In the subsequent sections, we discuss the journey of eggplant transformation—from the beginning of transformation dealing with its technical aspects to the commercial adoption of the transgenic crop—as well as the application of the latest technology, the genome editing approach (Figure 2). 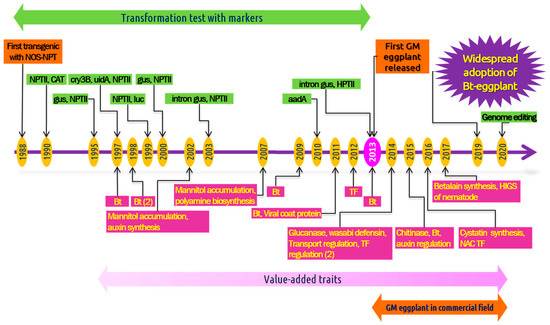 Figure 2. Timeline of the engineering of eggplant—from the first report to the commercialization. Multiple publications in the same year are mentioned in parenthesis.