White leadtree or Leucaena (Leucaena leucocephala) (), also known as ipil-ipil, is native to Central America and has spread and/or naturalized all over the World at a latitude between 30° N and 30° S due to a shrub variety used as a shade tree for coffee, cocoa, hemp plantations, pepper, vanilla, and other essences.

White leadtree or Leucaena ( Leucaena leucocephala ) ( Figure 1 ), also known as ipil-ipil, is native to Central America and has spread and/or naturalized all over the World at a latitude between 30° N and 30° S due to a shrub variety used as a shade tree for coffee, cocoa, hemp plantations, pepper, vanilla, and other essences [1][2]. 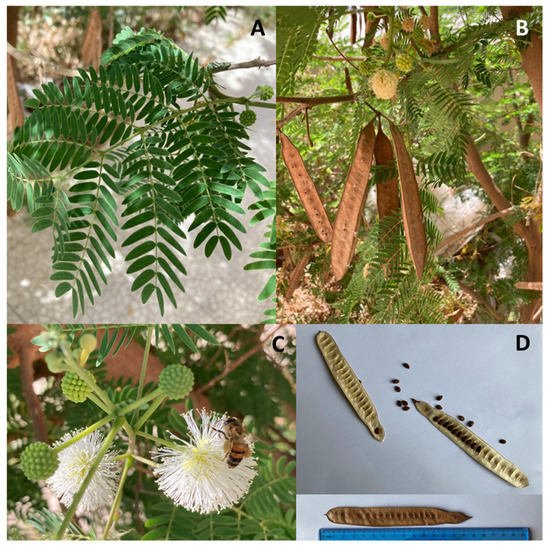 The Leucaena genus includes only 24 native species (19 diploid and five tetraploid species) [3], even though several researchers [4][5][6] refer to about 50 species of shrubs and trees found in the tropical and subtropical regions of North and South America, Africa, and the South Pacific and more than 800 cultivars, grouped in three main types: (1) the common type, with small and shrubby varieties that grow up to 5 m in height; (2) the giant type, including varieties up to 20 m tall, with larger leaves, pods, and seeds, and a larger trunk poorly branched; and (3) the “Peru” type with medium-sized varieties that grow up to 10 m in height, with lots of branches from the bottom of the trunk, and producing abundant forage with frequent pruning [1]. Undoubtedly, the morphological and ecophysiological diversities within the genus combined with the high crossability among species provide ample opportunities for genetic improvement, via traditional breeding approaches and notably via interspecific artificial hybridization, to develop genetically improved seed lines [3].

The optimal growth of Leucaena occurs in areas that receive an average annual precipitation of 1500 mm, with a dry season of 4 months [2] and with an average annual temperature between 25 and 30 °C [4]. It tolerates a wide variety of soil conditions [8], and the best growth occurs under direct sunlight in well-drained soils, from moderately alkaline (pH 7.5) to slightly acidic (pH 6.0), with a salinity less than 20 mmhos/cm [9].

In the following sections, pros and cons of using the Leucaena as protein source are assessed by a detailed analysis of literature data on the topic according to a four-box analysis framework approach: strengths, weakness, opportunities, and threats, known as SWOT analysis [10], as already performed by the authors elsewhere [11][12].

Heifers fed with L. leucocephala incorporated into the ration from 20% to 80% DM had no effect on dry matter and organic matter intake and digestibility, but energy losses in the form of methane emission were reduced to 61% (with Leucaena forage included at 80% DM level), in comparison to the no-Leucaena diet, even though the energy losses in the urine increased linearly with the increased inclusion of Leucaena in the diet [13]. The optimum level of inclusion of L. leucocephala in cattle rations as a source of condensed tannins lies in the range of 20–40% of ration dry matter [13].

Using leaf meal as a supplement for broilers, a daily growth of 100−110 g per week can be determined; in addition, in quantities not exceeding 5% of the diet, leaf meal could be used with other xanthophyll sources to give a satisfactory color to the carcass [14]. Adult chickens fed with Leucaena leaf meal up to 7% of the diet showed an increase in the use of crude protein and metabolizable energy [15]. Dumorné [16] found positive effects on weight gain, body weight, and feed intake of laying hens with inclusion of Leucaena leaves meal from 6 up to 12 g/bird/day, in comparison with the control diet without Leucaena. Feeding broiler chicken with boiled L. leucocephala meal (10% of the diet) was recommended since it furnished high carcass and meat attributes of broiler chicken [17]. In research conducted on laying hens, a consistent increase in the yolk color, with inclusions equal to 16% of the diet [18], was found.

On growing pigs, the use of Leucaena leaves did not produce significant increases in average weight, but a 47% increase in food conversion [19]. Ekpenyong [20] claimed that it may be possible to use Leucaena leaf meal as a means of meeting the amino acid requirements of pigs fed in the tropics.

Among the vegetable sources, L. leucocephala seems to be suitable to fill the deficiencies of other sources, especially from a protein and amino acid point of view, representing, moreover, an economically sustainable nutritional source. Being highly productive and having a medium-high protein content, it can be used as feedstuff, especially in those areas where the problem of finding alternative protein sources arises, such as the inland areas of the Mediterranean countries. Leucaena forage can be a valid food both for ruminants and for non-ruminants as well. Its limited use can be due to the presence of antinutritional factors, especially tannins and mimosine, but the research proved that these constraints can be overcome in several ways, not last the search of low anti-nutritional genotypes. Leucaena is also a plant worthy of interest for the reduction of methane production by ruminants when fed with Leucaena due to the presence of tannins.

Last but not least, the interest in L. leucocephala is linked to its versatility, which makes it a multipurpose plant that can provide several usage options: ornamental, fire break and windbreak, oil extraction and biofuel’s production, sources of pharmacological compounds also for veterinary applications, and forage plant for honeybees and other pollinators.