Today, an improved understanding of cancer cell response to cellular stress has become more necessary. Indeed, targeting the intracellular pro-oxidant/antioxidant balance triggering the tumor commitment to cell demise could represent an advantageous strategy to develop cancer-tailored therapies. Ethanolic extracts from Mangifera indica L. have been proved to possess anti-tumor properties in many cancer systems. However, although most effects have been demonstrated with fruit pulp extract, the underlying molecular mechanisms of mango peel are still unclear. This research was undertaken to explore the effects of mango peel extract (MPE) on colon cancer cell lines. Data obtained demonstrated that MPE can affect the cell viability of three colon cancer cell lines (HT29, Caco-2 and HCT116), inducing an imbalance of cellular redox responses. A consistent decline in thiol group content, which was accompanied by upregulation of MnSOD—a mitochondrial scavenger enzyme that modulates the cellular response against oxidative damage- was observed. Such an effect was the consequence of an early production of mitochondrial superoxide anions that appeared after just 30 min of exposure of colon cancer cells to MPE. The effect was accompanied by mitochondrial injury, consisting of the dissipation of mitochondrial membrane potential and a decrease in the level of proteins localized in the mitochondrial membrane (VDAC1, mitofilin, and some members of Bcl-2 family) —with the mitochondrial release of apoptogenic factors (cytochrome C and AIF). The analysis of the cytotoxic effects exerted by the different constituents of MPE (gallic acid, mangiferin, citric acid, quinic acid, pentagalloyl glucose, and methyl gallate) allowed us to identify those phytochemicals responsible for the observed anticancer effects, sustaining their future employment as chemopreventive or therapeutic agents.

1. Beneficial value of a diet rich in phytochemicals

In recent years, many different findings have highlighted the beneficial value of food in the prevention and/or as a supportive strategy of the most common therapies for the treatment of many chronic diseases [1]. For these reasons, the term “functional food” is being used at an ever-increasing rate to indicate the antioxidant, anti-tumor or anti-inflammatory properties of many bioactive compounds extracted from plants or fruits [2][3][4][5][6][7]. Therefore, nutrient supplements and bioactive components as natural compounds are nowadays considered as fundamental components that everyone should include in diet for their contributions to people’s wellbeing[8][1] This interest is also supported by epidemiological studies that demonstrate the value of nutrients in inhibiting cancer growth, thus offering chemopreventive action. Such observations have prompted even more people to adopt a healthier food regimen. On the other hand, compelling evidence has also noted how, among phytochemicals, polyphenols—including phenolic acids, flavonoids, stilbenes, and lignans—play essential roles in human health, providing valuable benefits[9]. Indeed, these secondary metabolites of plants have been proven to modulate different cell signaling pathways correlated with cell cycle control[10], cell demise programs such as apoptosis and autophagy[11], and inflammatory processes[12], which puts them in the spotlight for cancer research for their antitumor profiles.

Mangifera indica L., a crop belonging to the Anacardiaceae family,  has been cultivated in India and Southeast Asia for more than 4000 years[6]. Nowadays, mango orchards are spread around the world, in both tropical and subtropical environments, finding suitable areas for cultivation also in the Mediterranean area, where their spread first started in Spain, then, together with other tropical plants, also colonized Sicily, at least 20 years ago [13][7][14]. A plethora of beneficial effects have been described for Mangifera indica L. fruit preparations, which possess a valid nutraceutical potential for anticancer, immunomodulatory, radioprotective, antidiabetic, anti-inflammatory, and antioxidant properties[6][15][16]. Beyond the edible part of the fruit represented by the pulp (or mesocarp), the health-endorsing properties of mango have been also attributed to other different parts of the fruit such as the seed coat (endocarp), seed and peel (exocarp). In fact, although the pulp is endowed with a high polyphenolic and carotenoid content represented by mangiferin, gallic acid, gallotannins, quercetin, isoquercetin, ellagic acid, β-glucogallin and α- and β-carotene, many studies have supported the relevant composition of the other parts of mango fruit. In this regard, it has been observed that the peel and seed, usually discarded in fruit processing, are an important bio-source that can be exploited for their high content of polyphenols (mangiferin, quercetin, rhamnentin, ellagic acid and kaempferol), carotenoids, dietary fiber and vitamin E[14].
Several phytocompounds from different fractions of mango fruit have been shown to be powerful free radical scavengers, anti-microbial compounds, anti-inflammatory mediators or cancer preventive molecules[17], also exhibiting a strong cytotoxic activity towards many different human tumor models, such as blood [18], lung[19], breast [20], colon[21] and prostate cancer cells [22]. The anti-tumor action of mango extracts has been also demonstrated in vivo. In this regard, mango phenolic compounds showed a chemotherapeutic potential for suppressing tumor growth in breast cancer xenografts in mice, lowering the expression of a plethora of tumor associated proteins such as PI3K, AKT, hypoxia inducible factor-1  (HIF1 ), and vascular endothelial growth factor (VEGF)[23].
The antitumor ability of crude extracts of mango fruit has been largely explored. The edible part of the fruit (pulp), tested in in vitro models represented by a colon adenocarcinoma cell line (SW480), as well as in mice with colon carcinoma, exerted a prominent antiproliferative activity[24] [19]. Similar effects were also described for other parts of the fruit, such as the seed, which significantly reduced the cell viability of SW40 and COLO 320DM colon carcinoma cells and HeLa cervical cancer cells, while being ineffective on normal human lymphocytes[25].

Although the beneficial properties of mango have been well described, it is worthy of note that the chemical composition of mango, as well as the associated biological activity, can vary in relation to the area of cultivation, and with the ripeness of the fruit at the time of harvest. All of these conditions can seriously affect both organoleptic features and phytocompound profiles, offering different attributes that meet consumers’ appreciation[26].
In recent years, Mangifera indica L. crops have been introduced in Sicily (Italy), where the favorable climate offers the opportunity to obtain fresh products rich in the phytochemicals that have increased consumer demand. Our previous investigations specifically focused on Sicilian mango fruit demonstrated that mango peel extract (MPE) can exert remarkable cytotoxic effects on human colon cancer cells, while only modest effects occur in normal human fibroblasts[27]. The antitumor action was the consequence of programmed apoptotic cell death associated with precocious ROS generation, DNA fragmentation, PARP cleavage, and a general genotoxic stress evidenced by H2Ax phosphorylation[27]. The data  provided evidence that MPE induced a rapid generation of mitochondrial superoxide anions, associated with a consistent thiol group decline that could be at the root of mitochondrial dysfunction triggered by MPE. Such an experimental observation was supported by the dissipation of mitochondrial membrane potential, with the consequent mitochondrial release of cytochrome C and AIF—two well-known apoptogenic factors. AIF is an apoptosis-promoting factor that can be released from the mitochondria following the loss of mitochondrial membrane potential and redistributed into the nuclear compartment to take part in chromatin condensation and DNA fragmentation[28]. Under our experimental conditions, the mitochondrial dysfunction was also sustained by the drop of VDAC1, as well as mitofilin—a mitochondrial membrane protein involved in the shaping and remodeling of the cristae. These data were consistent with a study by Madungwe et al.[29] demonstrating that mitofilin knockdown is necessary in order to trigger apoptosis via the activation of the AIF–PARP pathway.
Altogether, our findings seem to indicate that the loss of redox balance, mediated by both genotoxic stress and mitochondrial injury, may represent the causative events orchestrating the antitumor action of MPE. The same treatment caused the mitochondrial release of cytochrome C, whose translocation could irretrievably concur with the apoptotic programmed cell death that we demonstrated in our previous studies. Cytochrome C can indeed participate in the cell death process upon its association with apoptotic protease-activating factor-1 (Apaf-1) to form the apoptosome, or localizing into the nucleus to support the molecular repair machines at DNA-damaged sites induced by caspase independent events[30][31]. However, we cannot exclude the possibility that cytochrome C release is related to mitofilin downregulation promoted by MPE treatment. This hypothesis is sustained by Yang’s studies demonstrating that mitofilin knockdown makes cells more prone to intrinsic apoptotic death, causing the release of cytochrome C from the mitochondrial cristae[32].
Altogether, our results indicate that MPE induces a canonical apoptotic pathway that likely starts in the mitochondria.
In light of our previous data concerning the chemical characterization of MPE [22], we also demonstrated that gallate esters—the most representative constituents of MPE—could be responsible for the observed anticancer effects. However, despite the findings reported here, further in-depth analyses will be needed in future in order to better understand whether MPE cytotoxicity can be ascribed to a specific compound, or to a combination of two or more phytochemicals that could exert their antitumor potential by acting in a synergistic manner in the extract. A schematic representation of the mechanism described is reported in the figure. 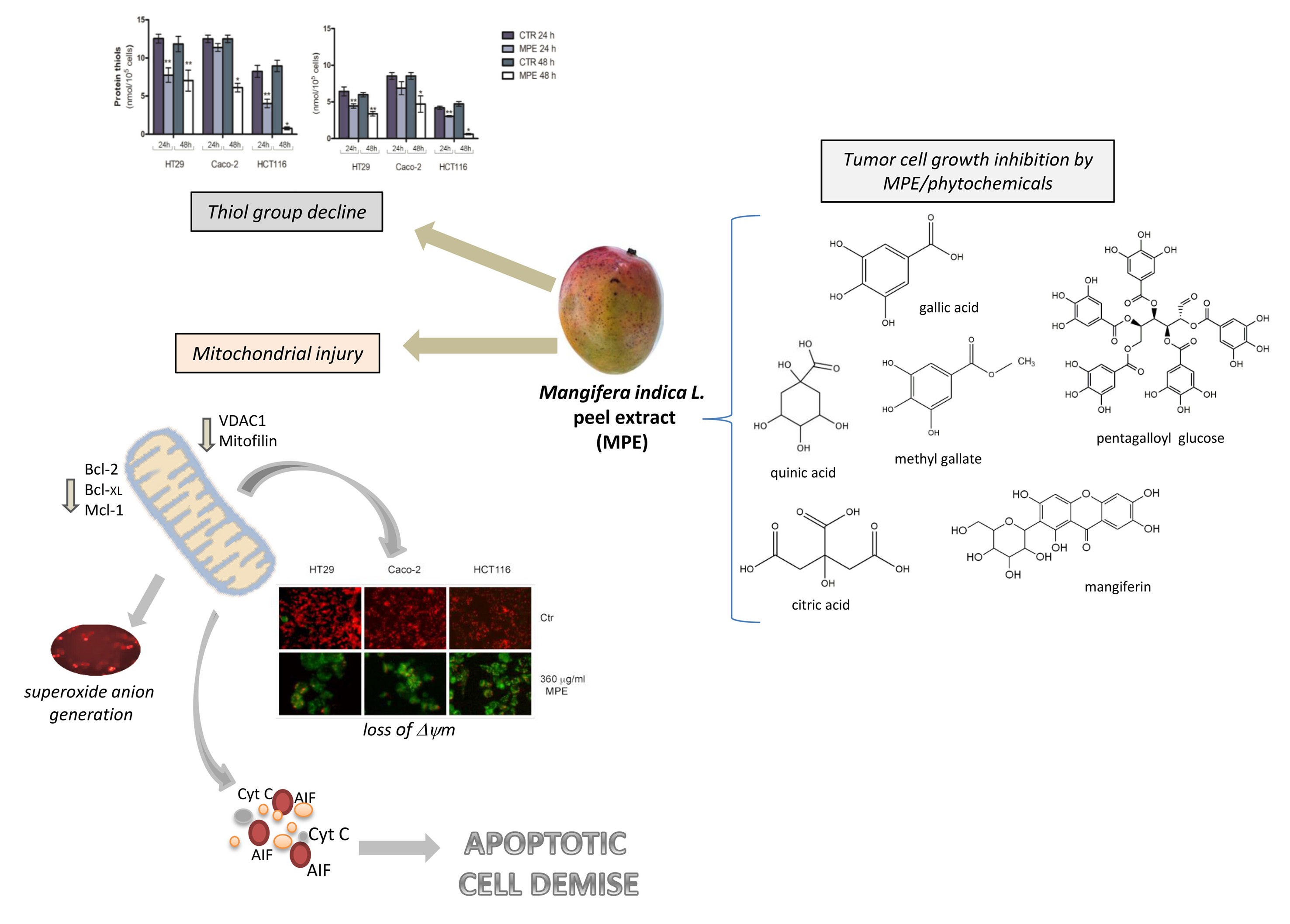