Rheumatoid arthritis (RA) is a debilitating disease caused by several factors, which have only been partially identified. Globally approximately 0.24% of people are affected by RA, with women being more affected than men. The gastrointestinal tract is an essential getaway for the intake of favorable and harmful microbes and their metabolites through food and drinks. The imbalance of gut microbiota can cause gut dysbiosis, which is caused by an abundance of Prevotella copri. In recent years there have been reports citing Prevotella copri as the causative organism for RA, but there also have been reports contradicting the above findings. This topical review attempts to bring the two viewpoints together and find common ground for a rational hypothesis.

Gut dysbiosis has been argued as a possible cause for rheumatoid arthritis (RA), an inflammatory autoimmune disease, where an increase in pro-inflammatory cytokines is observed in the joint synovium of patients [1]. A number of factors, including microbes, have been implicated in the pathogenesis of RA. One of our recent reviews published in Microorganisms described several genetic, gender-specific, environmental factors, food habits, periodontitis, and gut microorganisms like Prevotella that can influence the commencement or advancement of RA [2]. A proper balance of gut microbiota, such as a balance between beneficial bacteria (e.g. Lactobacillus casei and Lactobacillus acidophilus) and non-beneficial bacteria (e.g. Prevotella copri), can help to manage rheumatoid arthritis, dysentery, and similar diseases (Figure 1, reproduced from Figure 1 of Paul and colleagues) [2][3]. The gastrointestinal tract is an essential getaway for the intake of favorable and harmful microbes and their metabolites through food and drinks [2]. Probiotic food or therapeutic supplements containing probiotic bacteria can provide preventative and supportive relief (where the disease has already manifested), as shown in previous preclinical and clinical studies (Table 2 of Paul et al., 2021) [2]. However, a recent report holds that new-onset untreated RA (NORA) patients were characterized by an abundance of Prevotella copri in the gut, suggesting P. copri to be the agent behind the onset of RA [4]. On the other hand, a different Prevotella species, Prevotella histicola has been reported to have beneficial effects on RA. 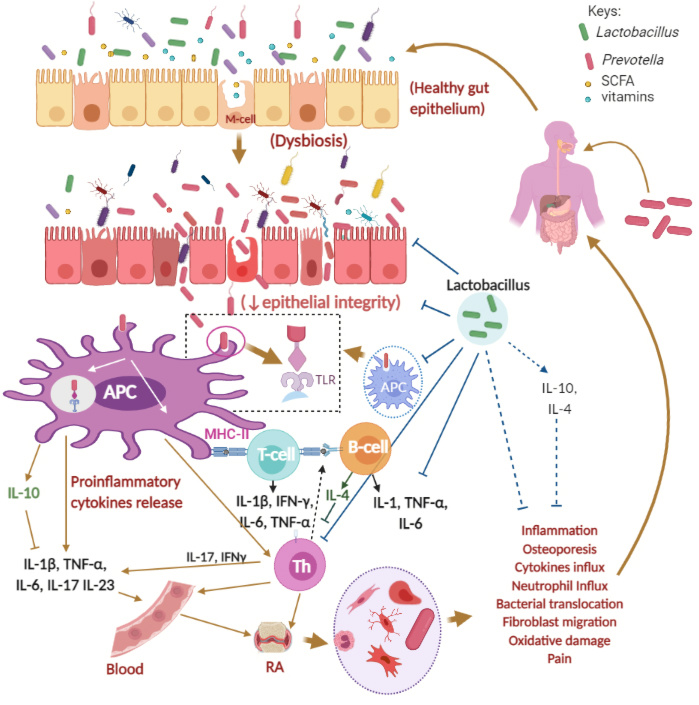 Gut microbes are linked to diets, with the Mediterranean diet being said to reduce pain and improve physical functions in RA patients. P. copri is a diet-responsive bacteria and has been linked to the elevated presence in the gut in humans used to a high fiber diet, while Bacteroides spp. were present in humans used to omnivorous and animal protein-rich diets. P. copri showed almost complete absence in the gut of subjects with high adherence to MD. This poses the question of diet-based functionality or the possibility of the existence of different strains of P. copri, which selectively inhabits a person’s gut based on the person’s dietary habits. The answer has possibly in part now been found by Filippis and colleagues [5]. Their investigations were based on P. copri pangenomic strains isolated from metagenomes of humans with different dietary habits [5]. According to their findings, a vegetable and high fiber-based diet encourages a particular P. copri strain with the capability of breaking complex carbohydrates to inhabit the gut, while an omnivorous diet encourages a different strain of P. copri with the capability of metabolizing protein to branched-chain amino acids (BCAA) [5]. This finding was confirmed further by analyzing P. copri strains from communities with a vegetarian dietary habit and communities with more animal protein in their diet [5]. BCAA to histidine ratio has been proposed as a biomarker for knee arthritis, and it has been hypothesized that increased BCAAs may result from increased collagen breakdown and amino acid release [6].

Interestingly, increased BCAAs like leucine, isoleucine, and valine have also been linked to the development of Type 2 diabetes and insulin resistance [7]. Increased Prevotella copri has been found in feces of Type 2 diabetes patients along with elevated plasma levels of the pro-inflammatory cytokine IL-6 [8]. A positive correlation has been found between Type 2 diabetes and RA [9], as well as elevated plasma IL-6 levels and RA [10]. The overall conclusion would be that more dietary protein would lead to their breakdown in the gut by a Prevotella copri strain producing more BCAAs. Elevated BCAA levels can also be the cause of Type 2 diabetes and elevated levels of IL-6, both factors having a positive correlation with the initiation of RA. A vegan diet would cause a separate Prevotella copri strain to inhabit the gut with the capability to break down complex carbohydrates but not produce BCAAs.

On the other hand, the Prevotella issue may take more time to resolve because the specific increase of this bacteria has been observed only in preclinical stages or early RA [11]. It would also leave a question, for instance, as to whether RA is correlated with dysbiosis of oral microbiota and more specifically, Porphyromonas gingivalis, Aggregatibacter actinomycetemcomitans and periodontitis [12]. However, the above finding on P. copri does fill in a void regarding the supposed ‘conflicting’ findings regarding P. copri and RA and highlights the importance of shotgun metabolomics in the elucidation of causative microbiota factors for RA.