The Maillard reaction is a simple but ubiquitous reaction that occurs both in vivo and ex vivo during the cooking or processing of foods under high-temperature conditions, such as baking, frying, or grilling. Glycation of proteins is a post-translational modification that forms temporary adducts, which, on further crosslinking and rearrangement, form permanent residues known as advanced glycation end products (AGEs). Cooking at high temperature results in various food products having high levels of AGEs. This review underlines the basis of AGE formation and their corresponding deleterious effects on the body. Glycated Maillard products have a direct association with the pathophysiology of some metabolic diseases, such as diabetes mellitus type 2 (DM2), acute renal failure (ARF), Alzheimer’s disease, dental health, allergies, and polycystic ovary syndrome (PCOS). The most glycated and structurally abundant protein is collagen, which acts as a marker for diabetes and aging, where decreased levels indicate reduced skin elasticity. In diabetes, high levels of AGEs are associated with carotid thickening, ischemic heart disease, uremic cardiomyopathy, and kidney failure. AGEs also mimic hormones or regulate/modify their receptor mechanisms at the DNA level. In women, a high AGE diet directly correlates with high levels of androgens, anti-Müllerian hormone, insulin, and androstenedione, promoting ovarian dysfunction and/or infertility. Vitamin D3 is well-associated with the pathogenesis of PCOS and modulates steroidogenesis. It also exhibits a protective mechanism against the harmful effects of AGEs.

Cooking practices have evolved, along with the evolution of man, from eating raw meat to cooking on low flame and later modernized to high flame cooking, such as baking, caramelizing, or preserving meats with sugar and spices. These high-temperature cooking techniques, such as grilling, roasting, and deep-frying, enhance the flavor of food and the desired texture in the final cooked product. This is attributable to a unique chemical reaction known as the Maillard reaction [1]. This reaction was named after the French scientist Louis Camille Maillard who attempted protein synthesis in his laboratory in 1912, but the reaction mixture ended up creating a faux meaty aroma and flavor [1][2][3]. These byproducts are the most extensively studied group of heterogeneous molecules that are formed in vivo while creating additional food flavors [1]. Reducing sugars (glucose, galactose, and fructose) readily bind with the amino group of free lysine, arginine, and sometimes cysteine, tryptophan, and histidine, resulting in the formation of the Maillard reaction glycated products. This occurs under normal physiological conditions through a series of nonenzymatic reactions [4][5], as presented in Figure 1.

Figure 1. The Maillard reaction: A simple condensation reaction of protein and glucose. They are generally known as glycated proteins.
These intermediate products are known as Schiff’s bases or Amadori products, which are chemically reversible molecules formed endogenously. These products undergo conformational changes (such as rearrangement of the molecules), which stabilizes them into the final heterogeneous products, abbreviated as AGEs (Figure 2). Following their conformational changes, the products bind tightly with proteins available in the vicinity [6] and further crosslink with long-lived proteins, such as collagen, lens protein [4], hemoglobin [7], lysozyme, alkaline phosphatase, elastin, etc. [8]. These proteins are present in low abundance [9] in almost every tissue and generally produce a temporary or reversible effect during binding [10]. 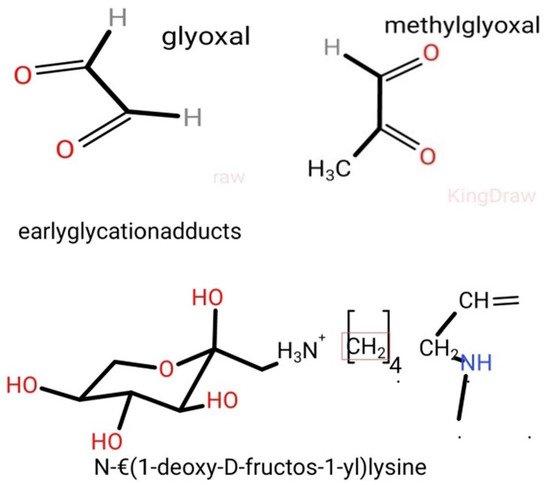 Figure 2. Early glycosylation protein adducts, such as glyoxal, methylglyoxal, N-ε(1-deoxy-D-fructose-1-yl)lysine. (Diagrams are drawn using the KingDraw application software).
Glycation of some important proteins, such as β-amyloid present in neuronal tissue, can affect the progression of Alzheimer’s disease (AD). Their accumulation in brain tissues represent a marker for the diagnosis and prognosis of the disease by forming amyloid plaques, neurofibrillary tangles, and activated microglia [11][12][13]. With the involvement of structural proteins, such as collagen, the in vivo crosslinking of AGEs results in the hardening of the extracellular matrix, causing further dysfunction of vessels and organs [7].
Various detection and measurement databases [9][14] prove that AGEs are formed in both processed and unprocessed foods [5]. Endocrine disruptors are a group of chemicals present either naturally or synthetically in foods and various substances. These disruptors have a great affinity towards hormones, are detrimental to the endocrine system, and affect the overall health. Presence of these chemicals in food is increasing as a result of modern inventions in food science and technology [15][16]. One of the widely used food products is infant formula milk, processed in huge mechanical plants at high temperatures. Absorption of formula milk elevates the serum levels of AGEs at a very early age [17].

There are two types of AGEs: endogenous and exogenous. The Maillard reaction is a common nonenzymatic reaction that usually occurs after assimilation of food. Biomolecules are readily available to react with the pool of Maillard products within the body, which consists of both exo- and endogenous AGEs. Long-lasting proteins, such as collagen, that come into contact with free circulatory glucose contribute towards endogenous AGEs. Exogenous AGEs comprise cooked or processed foods, beverages, and other food items. Exogenous AGEs contribute more towards the AGE pool than endogenous AGEs [2][18][19][20].
Thus, it is important to analyze and determine the content and amount of AGE in a food product. Examining the association between serum AGE and RAGE (receptor for AGEs) may help to understand the underlying causes of specific health issues [15].
Some of the approaches to analyze dietary AGEs are as follows:

Chemically, AGEs are formed by the condensation of an aldehyde group of sugar with amino groups of protein, resulting in the formation of reversible products known as Schiff’s bases [5], such as aldimine. These products are maintained at an alkaline pH, usually greater than 7. The formation of AGEs is promoted at higher pH. The rearrangement of aldimines depends on the number of free sugar/amino groups attached or available along with the pH being maintained above 7 [7]. This is also known as the initial phase. The aldimines further rearrange into covalently-bound Amadori products [3] (an important milestone in the glycation of proteins). Schiff’s bases (Figure 3) specifically rearrange themselves when the pH drops below 7. This phase is also known as the proliferation stage. Foods below the pH of blood might be responsible for the pathology of various diseases [7]. All products are reversible up to this stage. The numerous rearrangements of the Amadori products, such as isomerization, epimerization, and hydrogen bonding, result in the formation of final irreversible molecules known as AGEs. This stage is known as the advanced proliferation phase of glycation [9][25][26]. 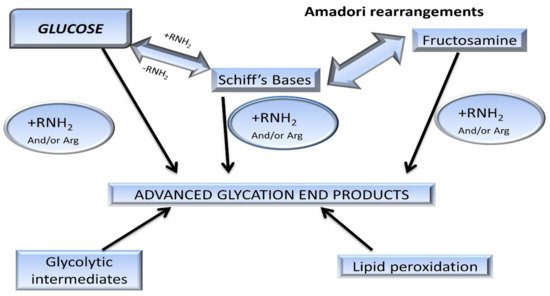 Figure 3. Pathway of protein glycation forming Maillard reaction products (MRP). Amadori rearrangements are highlighted within the early reversible adducts, such as Schiff’s bases. These glycated adducts are irreversibly modified into advanced glycation end-products [14].
In our biological system, there are various types of active AGE molecules exerting different physiological effects [4][18].
Commonly found AGEs in foods are listed below [14]:
Only 10–30% of exogenous AGEs are absorbed into the systemic circulation when administered orally [28]. The maximum absorbed dietary AGEs are pyrraline and pentosidine (around 60–80%) [4]. Most of these absorbed AGEs are free single amino acids, low molecular weight peptides, or high molecular weight compounds [29]. CML is usually absorbed by simple diffusion [30], whereas pyrraline is absorbed in the intestinal epithelium as a dipeptide via peptide transport [31]. Proteolytic digestion is the primary step in the digestion of proteins; however, modification of proteins by AGEs results in hindered absorption and digestion of proteins [29][32]. Post digestion, fructose-lysine and CML are bound to peptides smaller than 1000 Da, making them readily available for absorption [33]. Maillard reaction products further reduce the uptake of regular proteins via the epithelium; this crosslinking promotes uptake via Peyer’s patches, e.g., β-lactoglobulin and α-lactalbumin. The in vivo absorption and assimilation of CEL and CML were studied in rats [34] by intravenous administration of these glycated products. It was observed that these products target and temporarily accumulate in the liver. To assess the distribution and assimilation, radioactive studies on AGEs revealed that, after 72 h of exposure, 60% of the radioactivity is detected in the liver and kidneys, as well as in the lungs, spleen, and heart [35].