HDL are the first defensive barrier against the burden of high LDL cholesterol levels owing to their contribution to reverse cholesterol transport as well as their antioxidant and anti-inflammatory properties, among others.

Heterozygous familial hypercholesterolemia (HeFH), the most frequent human metabolism monogenic disorder caused by mutations in the genes encoding for the low-density lipoprotein (LDL) receptor [1], apolipoprotein (Apo) B-100 [2], proprotein convertase subtilisin/kexin-type 9 (PCSK9) [3] or Apo E [4], entails high LDL cholesterol concentrations, resulting in a high lifetime risk for cardiovascular disease (CVD). In this respect, a subject with a pathogenic FH mutation and LDL cholesterol > 190 mg/dL has a 22-fold increased risk of premature CVD compared with a mutation-negative subject with LDL cholesterol < 130 mg/dL [5]. Fortunately, the introduction and widespread use of statins have markedly improved the prognosis of HeFH patients owing to their efficacy in LDL cholesterol reduction [6][7][8][9].

Although CVD in HeFH is largely driven by LDL cholesterol concentrations, its prevalence is extremely variable, even in subjects sharing the same pathogenic mutation [10]. Besides specific HeFH risk factors such as the type of mutation or the presence of tendon xanthomas [11], classical risk factors such as age, male sex, smoking, overweight/obesity, hypertension and low high-density lipoprotein (HDL) cholesterol may also account for the CVD rate differences in the HeFH population [9][12][13][14][15][16].

Concerning HDL, these nanoparticles are traditionally characterized by their cholesterol and protein content ( Figure 1 ); however, this cholesterol is not directly involved in the atheroprotective functions of HDL [17][18]. Discovered in 1929 by Macheboeuf [19] at the Pasteur Institute in Paris as lipid-rich α-globulins isolated from horse serum, these lipoproteins exhibit heterogeneity in their structure, metabolism and biological functions ( Figure 2 ). It must be taken into account that HDL particles, the first defensive barrier against the burden of high LDL cholesterol levels, are subject to constant intravascular remodeling that generates multiple HDL phenotypes. 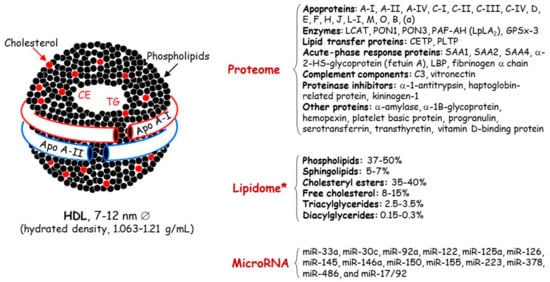 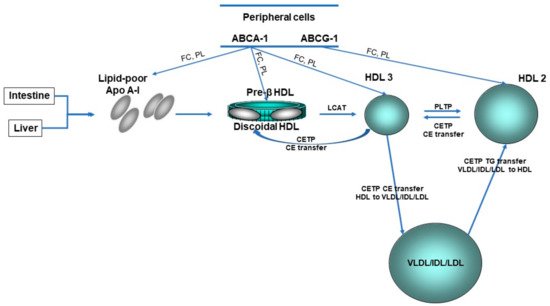 Since the Framingham Heart Study in 1986 [20], the epidemiological association between low HDL cholesterol levels and an increased risk of coronary heart disease has been well established in several large population cohorts [21][22]. Based on these data, low HDL cholesterol concentrations are <1.0 mmol/L (40 mg/dL) for men and <1.2 mmol /L (48 mg/dL) for women.

One of the first references in the scientific literature stemmed from a letter by Seftel [23] to the Editor of the New England Journal of Medicine pointing out from Goldstein et al. data [24] the low HDL cholesterol levels in FH subjects. With all subsequent clinical studies taken together, ambivalent results regarding HDL cholesterol concentrations have been reported in this specific population. Low HDL cholesterol concentrations have been associated with a 37% relative increase in cardiovascular risk [12][25] and suggested as a strong marker of preclinical carotid atherosclerosis in HeFH patients [26]. Furthermore, from a French–Canadian cohort, Khoury et al. [27] discovered HeFH individuals aged > 70 years without cardiovascular events and tried to establish CVD-free survival factors. Beyond LDL cholesterol, female sex, non-smoking, high HDL cholesterol and hyperadiponectinemia were the main markers of longer CVD risk-free survival in HeFH. By contrast, no differences in HDL cholesterol concentrations were found in other studies when HeFH were compared with non-FH populations [28][29][30]. Therefore, environmental and genetic interactions involved in HDL metabolism could explain, at least in part, these discrepancies [17][18].

HDL cholesterol concentrations are influenced by the turnover of Apo A-I, their major protein component. Kinetic studies with stable isotopes have supported increased HDL-Apo A-I catabolism and secretion, thus maintaining its serum concentration balanced in HeFH patients [31]. The former finding may be related to enhanced cholesteryl ester transfer protein (CETP) activity in HeFH that leads to the triglyceride enrichment of HDL and/or to Apo E-enriched HDL that is catabolized by an Apo E receptor-mediated pathway; this concurs with the smaller HDL particle size found in HeFH patients [32]. Additionally, FH patients have elevated concentrations of small nascent preβ1-HDL particles [33][34], but lower levels of large HDL2 particles compared to normolipidemic subjects [33]. Interestingly, elevations in plasma apo E have been reported in FH patients [35], and the APOE genotype might influence plasma HDL cholesterol levels in these patients [36]. Another Apo differentially expressed in HeFH is Apo L1, with a decreased content of this protein in HDL3 particles [37]. A specific analysis of the HDL3 subfraction in that study revealed a coordinated decrease in the content of Apo L1 and lecithin: cholesterol acyltransferase (LCAT), a key enzyme in HDL metabolism, in HeFH patients with a fatal myocardial infarction during follow-up.

HDL functions are often impaired in different clinical settings including FH [17][38][39][40] owing to compositional changes in proteins, enzymes, lipids and microRNA which entail the loss of their atheroprotective properties ( Figure 3 ). 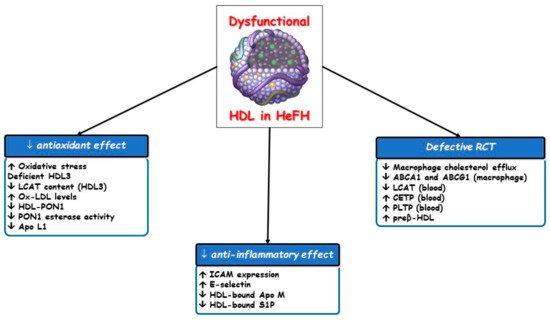 Since peripheral tissue is unable to excrete excess free cholesterol, which is toxic for cells, it must be removed by RCT to the liver for utilization and excretion with bile, a role of HDL. Most of the cholesterol is effluxed from cholesterol-laden macrophages to nascent or mature HDL particles and finally transported to the liver in both esterified and unesterified forms. In primary cardiovascular prevention in the general population, cholesterol efflux capacity and the total HDL particle number are each inversely associated with cardiovascular events, regardless of the HDL cholesterol concentration and of each other [22][41]. Hypercholesterolemia induces lipidomic and proteomic variations in HDL particles, thereby damaging their ability to promote macrophage cholesterol efflux. This finding stemmed from a study on ischemia-reperfusion injury in pigs, in which the beneficial vascular effects of HDL were abolished by hypercholesterolemia [42].

Although HDL particles are minor contributors to the overall antioxidant capacity of plasma [43], we must not forget that HDL3 particles are those with the most potent ability to protect LDL from oxidative damage [18], and this antioxidant property has been mainly attributed to LCAT [44]. Thus, a decreased LCAT content in HDL3 particles could reduce their antioxidant potential and favor LDL oxidation and atherosclerosis progression, thereby significantly increasing cardiovascular risk in FH patients. In fact, HeFH patients with corneal arcus, an independent predictor of CVD [45], have a lower content of Apo L1, LCAT and paraoxonase type 1 (PON1) in HDL particles [39].

On the other hand, the type and content of phospholipids are important regulators of HDL functions, producing an interesting relationship between the phosphatidylcholine/sphingomyelin ratio and the antioxidant activity of the HDL3 fraction. Decreased surface total phosphatidylcholine content with raised sphingomyelin and saturated fatty acid contents have been reported in HDL particles isolated from FH patients; this may reflect an increased surface rigidity and an ensuing impaired antioxidant capacity of HDL in FH [46].

Although cardiovascular risk reduction in FH patients is clearly linked to the decline in LDL cholesterol levels by statins, these drugs have been shown to improve or restore the functionality of some components of dysfunctional HDL [47][48][49]. In this respect, statin therapy increases PON1 activity and concentrations in HeFH patients [49].

PCSK9 inhibitors have represented a substantial change in the clinical management of hypercholesterolemia, mainly in the FH population [50][51], due to their high lipid-lowering efficacy and their preventive effects in CVD [52][53]. PCSK9 is involved in cholesterol homeostasis through the LDL receptor degradation pathway. Circulating PCSK9 has been shown to bind to LDL, lipoprotein(a) and HDL [54]. PCSK9 gain-of-function mutations are associated with increased HDL cholesterol and Apo A-I levels [55]. Furthermore, epidemiological studies such as the Dallas Heart Study [56] and the Quebec Child and Adolescent Health and Social Survey [57] also reported a positive relationship between PCSK9 and HDL cholesterol levels. The effect of PCSK9 on the LDL receptor and others including the ApoE receptor two and the very-low-density lipoprotein receptor appears to be responsible for this relationship, possibly by reducing the uptake of the ApoE-containing HDL [58].

However, PCSK9 inhibition by monoclonal antibodies, alirocumab and evolocumab, is associated with a significant increase in HDL cholesterol and apo A-I concentrations [59][60]. This beneficial effect could be explained at least in part by the LDL reduction as the cholesterol acceptor from HDL, an effect that overcomes the improvement of the LDL receptor-mediated ApoE-containing HDL [58]. Thus, the role of PCSK9 on HDL composition and subclasses as well as the impact on RCT should be investigated.