Electrostatic Repulsion Reversed-Phase Liquid Chromatography (ERRP) allows the elution of bases in protonated form without peak distorsion (as commonly happen in reversed phase) due to the presence of positive charges in the chromatographic system.

An efficient resolution of basic compounds by reversed phase HPLC (RP-HPLC) often requires fine tuning of unconventional mobile phases. In fact, their difficult separation is mainly due to the interaction of basic nitrogen with the residual, non-negligible acid silanols found on the stationary phase. Indeed, considering this, at most operating pHs, basic sites are protonated while silanols are in anionic form, and the strong resulting electrostatic interaction increases retention times of analyte and produces a peak shape distortion, including tailing, fronting, and splitting. In addition, taking into account that a large number of compounds of pharmaceutical interest are bases, and that biopharmaceutical and biological samples (e.g., peptides) also have multibasic sites, the HPLC analysis of basic samples has received particular attention [1][2][3]. Reversed phase HPLC remains the first choice of work, offering a set of possible solutions.

Regardless of the anchoring chemistry (often not stated in detail) to prepare silica-based stationary phases for RP-HPLC, it should be noted that about 50% of original silanols present on the silica surface remain unreacted after derivatization with organo-silane. Surface coverage of a typical C18 ligand span between 4 and 4.5 micromoles/m2, while the surface concentration of silanols on bare silica is about 8.0 micromoles/m2 [4]. Moreover, the additional “end-capping” procedure, with smaller silylating agents, fails to inactivate the residual silanols [5]. In the last 20 years, with the diffusion of ultra-high-pressure liquid chromatography (UHPLC), a lot of attention has been paid to innovative silica bulks with a reduced number of silanols. High-purity silica and hybrid silica particles were routinely used to develop stationary phases. The reduced amount of metals on the surface and the organic moieties in the siliceous skeleton enhance the peak performance, reducing the unwanted secondary selector/selectand interactions and increasing mechanical resistance. Hybrid silica, in particular, causes a reduction of nearly one-third of the number of silanol sites [6][7][8][9][10]. Unfortunately, in resolving bases, the use of recently developed silica bulks alone does not circumvent the problem. Therefore, working at a low pH (usually pH < 3.5) in the mobile phase represents one of two suitable solutions that allow the use of the standard RP commercially available columns. In these elution conditions, silanols are uncharged and basic solutes protonated. Sample peaks are sharp and their retention times are shortened. Alternately, the addition of amines to the eluent, preferably tertiary ones, can efficiently shield residual silanols, achieving similar effects. In this case, amines are positively charged at acidic pH and can interact electrostatically with the surface anionic silanols, while the hydrophobic moiety of the molecule can associate with the alkyl fragment of the stationary phase. Despite the two approaches having limitations (in some cases very low retention and consequent loss of selectivity are achieved; additives and acid mobile phases are not perfectly well-matched with MS detection), they have gained renewed interest due to the mixed-mode electrostatic repulsive interaction combined with the hydrophobic one. The two approaches, which have, to date, only focused on the suppression of silanols to enhance hydrophobic interaction and peak shape, were recently revised to investigate the effect of electrostatic repulsion. The modulation of the amount of fixed (herein called static) or adsorbed (herein called dynamic) positive charges on the stationary phase can efficiently contribute to retention of bases. Looking to the literature, a similar interaction has been provided in electrostatic repulsion hydrophilic interaction chromatography, named ERLIC. This elution mode involves a combination of the ion-exchange stationary phase with the same charge of analytes and the high organic solvent concentration as classical hydrophilic interaction liquid chromatography (HILIC) conditions [11][12]. In reversed phase liquid chromatography, the expression “electrostatic repulsion reversed phase” (ERRP) was introduced by Gritti in 2013 by studying the absorption behaviors of ionizable compounds in the presence of static positive charges on the C18 stationary phase [13].

The designing of alternative stationary phases to resolve basic compounds is an ambitious goal. Being the most intuitive and immediate solution, mixed-mode ion-exchange/reversed phase stationary phases (weak anion exchange/strong anion exchange, WAX/SAX, as well as weak cation exchange/strong cation exchange, WCX/SCX, and RP) were optimized to be used in these fields, exploiting the interaction due to the opposite charges if cation exchange supports were employed or the shielding of silanols using anionic exchange supports. For example, D.V. McCalley and coworkers reported the use of mixed-mode RP/embedded ion-exchange stationary phases. In this work, the elution of a set of bases (e.g., codeine, amphetamine and benzylamine) on different mixed-mode/RP stationary phases has been investigated: Primesep phases containing the strong carboxylate functionality (totally ionized over the normal pH range of RP working conditions) and a Hypersil Duet made of a mixture of 50% discrete C18 silica particles and 50% discrete sulfonic acid cation-exchange functionalized particles [14]. Different amounts of acetonitrile/phosphate buffer and different pHs were evaluated choosing low pH values (pH < 3) as optimal to obtain favorable retention. Premisep phases give good peak shapes due to the shielding of silanols by embedded ionic groups. Moreover, an additional and significant advantage of these phases lies in the increase in loadability for basic compounds. This behavior is amenable in the purification step of basic compounds.

An interesting paper published in 2012 [15] compares the elution of a small family of compounds of pharmaceutical interest on UHPLC hybrid bridged ethyl hybrid (BEH) stationary phases (Acquity CSH C18, Acquity CSH Phenyl, BEH C18, BEH C8, BEH Phenyl and BEH Shield RP18). Compounds are bases, acids and neutral and working conditions were optimized at pH = 3 and pH = 10 by gradient elution. On CSH phases, as expected, the bases weakly retained a low pH, while the acids showed the opposite trend. In addition, these stationary phases showed a good chemical stability after repeated switching of pHs (chromatographic traces B and C in Figure 1). The authors, moreover, demonstrate that the CSH phases outperform the others when formic acid and low concentration of buffer (ammonium formate) at pH 3 were employed in the resolution of the target mixture. These elution conditions agreed with the LC–MS applications [15]. Therefore, from a practical point of view, the success of a hybrid CSH stationary phase lies in the elution of weak bases at a pH smaller than 3 and in the potential MS compatibility. 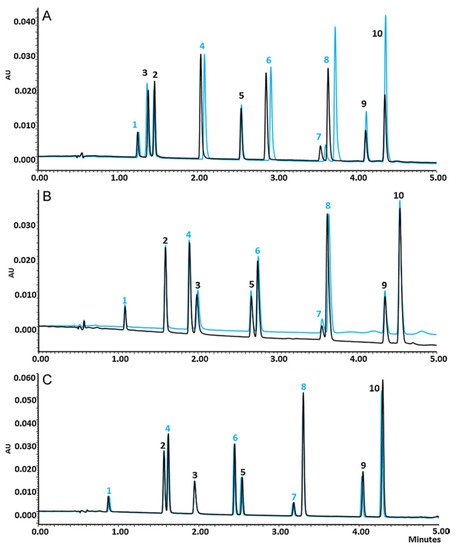 Figure 1. Chemical stability after repeated switches of pHs. Overlaid chromatograms obtained during experiments at pH 3.0 recorded before (black line) and after (blue line) those at pH 10.0. CSH stationary phases (Acquity CSH C18, trace B and Acquity CSH Phenyl, trace C) compared with Acquity BEH C18 (trace A). Reproduced with permission from [15].
Moving to the other stationary phases bearing positive charge fragments in their structures, embedded quaternary ammonium groups confined to the surface proximity [16][17][18] and ionic liquid-modified silica were developed by resolving peptides and nucleotides, which are also subject to the effect of residual silanols [19][20][21].

Charged amphiphilic or liophilic additives in the mobile phase have been successfully used to enhance the retention of basic compounds. When these additives are anionic, the modulation of retention could be affected by a combination of mechanisms: ion-pairing or ion-exchange chromatography. In the first case, protonated bases and anionic additives (inorganic as well as organic) provide the formation of neutral adducts and can be resolved by a reversed phase mechanism. In the second case, the anionic additives, especially those bearing a hydrophobic portion, can be adsorbed onto the stationary phase, promoting an electrostatic interaction similarly to a strong or weak anion exchange stationary phase [22][23][24][25][26]. In these elution conditions, the anionic silanols are not shielded by counterions; however, their effect on the peak distortion can be negligible. As an alternate approach, the addition of cationic and hydrophobic additives at low pHs of mobile phase can also help the resolution of bases. Now, the effect of these positively charged additives will provide an efficient suppression of silanols and, at the same time, the retention of protonated bases will be obtained by electrostatic repulsion on the surface of the positively charged stationary phase. The additive is adsorbed on the surface, mimicking, in a dynamic way, a fixed charged stationary phase, as seen in Figure 2. Actually, two classes of additives were employed: hydrophobic ammonium salts and ionic liquids [27][28][29][30][31][32]. It should be noted that to realize the better electrostatic repulsion effect, the counterion of the additive should not interact with the stationary phase nor with the analyte. For this purpose, highly hydrated anions (such as chloride, bromide and hydroxy anions) were used, having low affinities for the alkyl-chain stationary phase [33].

Figure 2. Schematic representation of dynamic ERRP conditions. The hydrophobic positively charged additive (here tetra-butyl ammonium ion, TBA) is adsorbed into the nonpolar stationary phase due to its lipophilic alkyl chains. Reproduced with permission [31].
In a paper published last year, our research group investigated the role of tetrabutylammonium hydroxide and tetrabutylammonium hydrogensulfate in the elution of 11 basic pharmaceutical compounds [27]. Different RP columns (Ascentis Express C18 2.0 μm, Acquity BEH C18 1.7 μm, Titan C18 1.9 μm) for ultra-high-performance chromatography (UHPLC) were evaluated together with the CSH column as reference of the static ERRP approach. All tested UHPLC columns, based on either pure silica or hybrid organic silica, benefited from the use of a cationic additive. Figure 3 shows the elution profiles of some compounds in the individually optimized RP and dynamic ERRP conditions. In the presence of TBA, peaks are very symmetric like to a perfect Gaussian even with even more retained compounds. In addition, high values of efficiency were maintained. 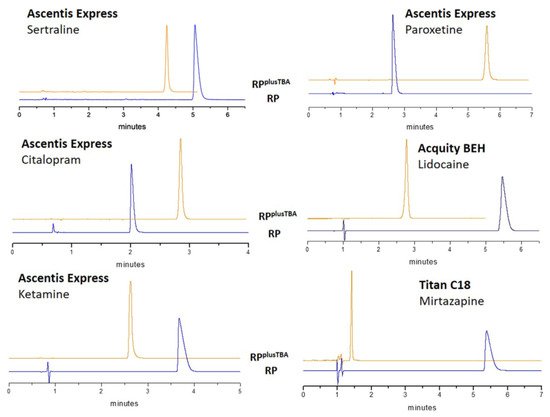 Figure 3. Dynamic ERRP in different commercially available UHPLC columns. Reproduced with permission from [27].
Many scientists believe that the main disadvantage of using cationic additives (either amine-based or ILs) lies in the reproducibility of elution conditions after long use. The nonreproducibility is due to the strong adsorption of the cations on the stationary phase, which prevents its regeneration. Although in some cases a long re-equilibration time may be necessary, especially in gradient elution, the dynamic ERRP approach can be used in routine methods such as, for example, quality control of pharmaceutical samples.
A recent paper reports the ICH validation of an analytical method to determine the contents of both terbutaline and salbutamol in tablets [30]. 1-Ethyl-3-methylimidazolium bromide ([EMIM][Br]) was selected as an additive whilst using an aqueous mobile phase free of organic cosolvent and a C8 stationary phase. The gain in quality of separation (peak shape and retention time) is clearly shown in Figure 4: B chromatographic trace refers to elution at pH = 3 and in absence of the IL additive, while C trace was recorded using the EMIM additive. Finally, the chromatographic method was compared to the official methods described in the USP 39 and BP 2013 monographs, which were more selective. 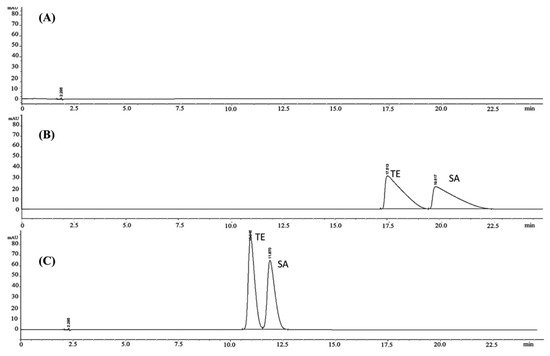 Figure 4. Typical chromatograms of blank (A); standard mixtures eluted with mobile phase without the addition of RTIL (B) and with [EMIM][Br] (C). Reproduced from [30].

Chromatographic separation of bases requires substantial experience in analytical method development to obtain well-resolved and symmetric peaks. The use of chromatographic systems where the hydrophobic interactions are combined with the electrostatic repulsions stands out as a valid solution. In fact, at acidic pH of the mobile phase, positively charged and hydrophobic molecules (bonded or adsorbed on stationary phase) allow the retention of ionized basic compounds and, at the same time, they shield residual silanols, improving chromatographic performances. Static ERRP is preferred when MS detection is needed or for large-scale purifications. Dynamic ERRP is useful in the optimization of analytical methods that require a selection of additives and concentrations. Despite the fact that the two approaches appear to be niche topics in the literature, we believe that they will play important roles in the future.