The effects of bone morphogenetic proteins (BMPs), members of the transforming growth factor-β (TGF-β) family, in endometrial cancer (EC) have yet to be determined. In this study, we analyzed the TCGA and MSK-IMPACT datasets and investigated the effects of BMP2 and of TWSG1, a BMP antagonist, on Ishikawa EC cells. Frequent ACVR1 mutations and high mRNA expressions of BMP ligands and receptors were observed in EC patients of the TCGA and MSK-IMPACT datasets. Ishikawa cells secreted higher amounts of BMP2 compared with ovarian cancer cell lines. Exogenous BMP2 stimulation enhanced EC cell sphere formation via c-KIT induction. BMP2 also induced EMT of EC cells, and promoted migration by induction of SLUG. The BMP receptor kinase inhibitor LDN193189 augmented the growth inhibitory effects of carboplatin. Analyses of mRNAs of several BMP antagonists revealed that TWSG1 mRNA was abundantly expressed in Ishikawa cells. TWSG1 suppressed BMP7-induced, but not BMP2-induced, EC cell sphere formation and migration. Our results suggest that BMP signaling promotes EC tumorigenesis, and that TWSG1 antagonizes BMP7 in EC. BMP signaling inhibitors, in combination with chemotherapy, might be useful in the treatment of EC patients.

Endometrial cancer (EC) arises from uterine endometrial epithelium and invades into uterine myometrium. EC is the sixth most common cancer in women, and shows a rising incidence partly due to increasing obesity and longer life-span. EC patients have relatively good prognosis because they are often diagnosed at early stages with symptoms such as abnormal bleeding and lower abdominal pain, but still about 90,000 patients world-wide die from EC per year [1]. EC is divided into endometrioid carcinoma, which is the most common histological subtype with relatively good prognosis, and non-endometrioid carcinoma with worse prognosis [2]. Endometrial carcinosarcoma (ECS) is a rare histologic subtype of EC, which contains both carcinomatous and sarcomatous components, and causes around 16% of deaths due to malignancies of uterine corpus [3][4]. The sarcomatous component is considered to be derived from the carcinomatous component in most cases [4].

2.1. BMP Signaling Is Activated in EC

The expression of mRNA for BMP ligands and receptors was found to be frequently increased in EC, as revealed by analysis of the TCGA EC database (Figure 1A). In addition, ACVR1 mutations were more frequently observed in EC compared to other cancers, in both the TCGA and MSK-IMPACT datasets (Figure 1B). Around half of ACVR1 mutations were R206H and G356D (Figure 1C), gain-of-function mutations commonly found in fibrodysplasia ossificans progressiva (FOP) and diffuse intrinsic pontine gliomas (DIPGs) [5]. Moreover, high expression of BMP7 mRNA correlated with significantly lower survival of EC patients; the expression of BMP2 mRNA also showed a correlation, albeit not significant, with poor EC patient survival (Figure 1D,E). We also performed survival analyses of other BMP ligands and receptors (Figure S1). However, there was no correlation between ACVR1 mRNA expression and EC patient survival. To investigate the tumor promoting effect of BMP signaling in EC, we further performed in vitro experiments using Ishikawa EC cells, revealing expression of mRNA for all type I and type II BMP receptors, except ACVRL1 (Figure 1F). BMPR1A mRNA was most abundantly expressed among the type I receptors, whereas BMPR2 mRNA was most abundant among the type II receptors (Figure 1F). In addition, we found that Ishikawa cells secreted BMP2 at a higher level than OVSAHO and SKOV3 ovarian cancer cells, as determined by an ELISA (Figure 1G). 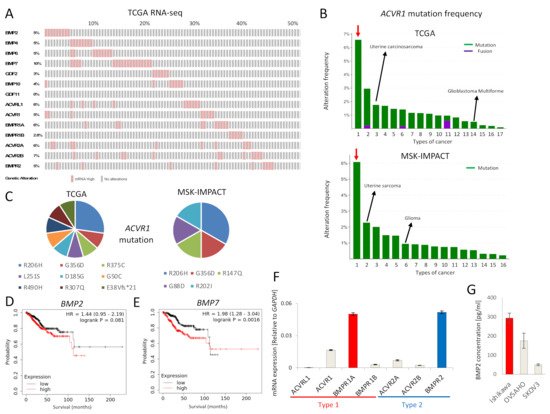 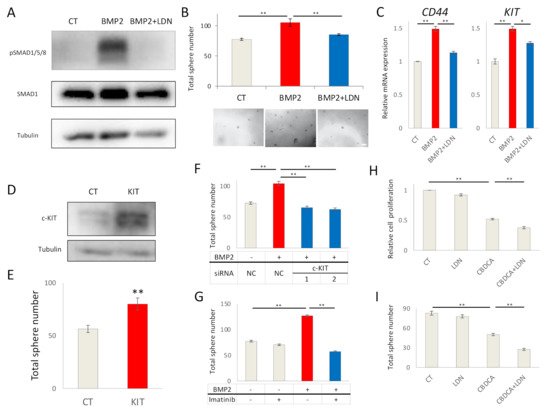 We investigated the effect of BMP signaling on downstream genes in Ishikawa cells, and found that BMP2 induced ID1, SNAIL and SLUG mRNA in a time-dependent manner (Figure 3A). ID1 induction was sustained till 72 h, whereas SNAIL and SLUG induction peaked rapidly at 2 h after BMP2 stimulation (Figure 3A). Since SNAIL and SLUG are EMT transcription factors, we investigated the expression of EMT markers by immunoblotting. The epithelial marker E-cadherin was suppressed by BMP2, whereas the mesenchymal markers N-cadherin and vimentin were enhanced in a time-dependent manner (Figure 3B); these effects were neutralized by treatment with LDN193189 (Figure 3C). E-cadherin attenuation and vimentin induction were also confirmed by immunofluorescent staining (Figure 3D). These results support the notion that BMP2 induces EMT in Ishikawa cells. 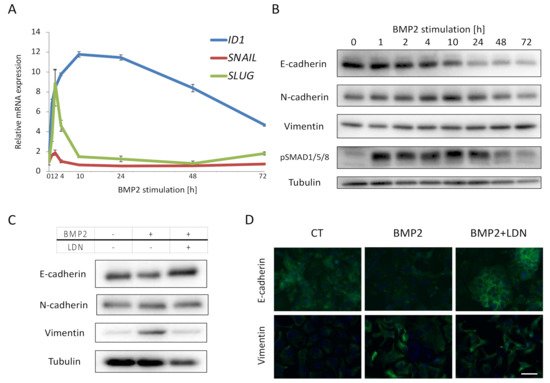 Figure 3. BMP2 induces EMT of EC cells. (A,B) Ishikawa cells were cultured in serum-free medium overnight and treated with 20 ng/mL BMP2 for the indicated time periods. Expression of SNAIL, SLUG, and ID1 mRNA was analyzed by qRT-PCR and normalized relative to 0 h (A), and expression E-cadherin, N-cadherin, vimentin and phospho-SMAD1/5/8 was analyzed by immunoblots, using α-tubulin as a loading control (B). (C,D) Ishikawa cells were incubated in the absence (CT) or presence of 20 ng/mL BMP2 and 200 nM LDN, in 1% FBS-containing medium for 48 h, and then subjected to immunoblotting (C) and immunofluorescent staining (D) for EMT markers. Scale bar = 10 µm. The results in panel A are shown as the mean ± SE.

As BMP2 induced EMT in Ishikawa cells (Figure 3), we investigated whether BMP2 also enhanced cell migration. Using a scratch assay, we observed that BMP2 enhanced Ishikawa cell migration, and that LDN193189 reversed the effect (Figure 4A). Since SNAIL and SLUG were induced after BMP2 stimulation of cells (Figure 3A), we knocked down SNAIL or SLUG by siRNAs. SNAIL knockdown had no effect on BMP2-induced cell migration (Figure 3B), whereas SLUG knockdown inhibited BMP2-induced cell migration (Figure 3C). The induction of SLUG by BMP2 and its suppression by siRNAs was confirmed by qPCR (Figure S2B). Moreover, SLUG knockdown reversed the suppression of E-cadherin induced by BMP2 and slightly attenuated the expressions of the mesenchymal markers N-cadherin and vimentin (Figure 3D). These results suggest that BMP2 enhances migration and EMT of EC cells in a SLUG-dependent manner. 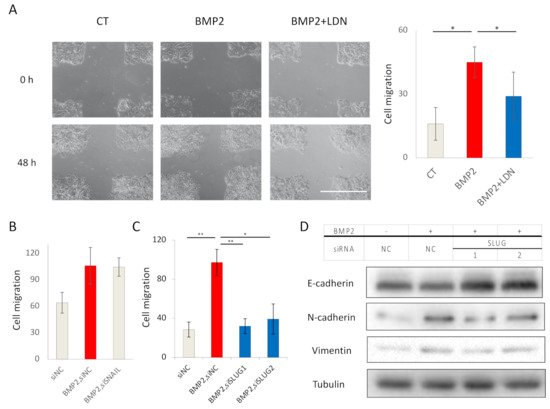 Figure 4. BMP2 enhances EC cell migration via SLUG induction. (A) Migration of Ishikawa cells was evaluated by a scratch assay. Confluent cell cultures were scratched by a 10 µL pipette tip and incubated in the absence (CT) or presence of 20 ng/mL BMP2 and 200 nM LDN193189 (LDN) in 3% FBS-containing medium for 48 h. Cell motility was determined by measuring the gaps between the cell sheets at 0 and 48 h. Scale bar = 100 µm. (B–D) BMP2-induced EC cell migration is dependent on SLUG, but not on SNAIL. Ishikawa cells transfected with siNC, siSNAIL (B), or siSLUG-1 or siSLUG-2 (C) for 48 h, were incubated in the absence (CT) and presence of 20 ng/mL BMP2 in 3% FBS-containing medium for an additional 48 h. Cell migration was analyzed by scratch assays (B,C), and expression of EMT markers was determined by immunoblotting (D). The results in panels A, B, and C are shown as the mean ± SE. * p-value < 0.05, ** p-value < 0.01.

We explored the possibility that BMP antagonists affected BMP signaling in Ishikawa cells. First, we assessed mRNA expressions of ten BMP antagonists in Ishikawa cells; TWSG1 mRNA was most abundantly expressed (Figure 5A). However, according to TNM plot, TWSG1 mRNA expression was significantly decreased in EC compared with normal endometrium (Figure 5B). Expression of the TWSG1 protein was detected both in cell lysates and cultured medium (Figure 5C). Exogenous TWSG1 suppressed BMP7-induced, but not BMP2-induced, SMAD1/5/8 phosphorylation (Figure 5D), and expressions of ID1 (Figure 5E) and SLUG (Figure 5F) mRNA. Consistent with these results, TWSG1 inhibited BMP7-induced, but not BMP2-induced, sphere formation (Figure 5G) and cell migration (Figure 5H) of Ishikawa cells. These results show that TWSG1 antagonizes BMP7 in EC cells. 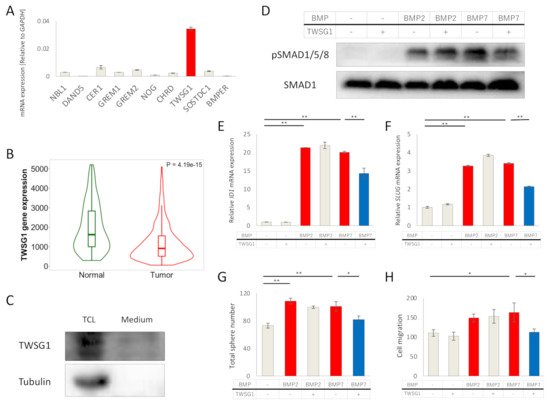 Figure 5. TWSG1 antagonizes BMP7 in EC cells. (A) TWSG1 mRNA is abundantly expressed in Ishikawa cells. mRNA expression of ten BMP antagonists was determined by qRT-PCR and normalized relative to GAPDH. (B) TWSG1 mRNA expressions of EC and non-cancerous endometrium were analyzed by submitting a query to TNM plot with selection of RNA Seq data. (C) Ishikawa cells secrete TWSG1. TWSG1 protein was detected by immunoblotting in both total cell lysates (TCL) and cultured medium (Medium) of Ishikawa cells. (D) TWSG1 inhibits BMP7-induced SMAD1/5/8 phosphorylation. Ishikawa cells were cultured overnight in serum-free medium, and then treated with or without 20 ng/mL BMP2, 50 ng/mL BMP7, and 1000 ng/mL TWSG1 for 3 h. Cell lysates were subjected to immunoblotting for P-SMAD1/5/8 and SMAD1. (E,F) TWSG1 suppresses BMP7-induced ID1 and SLUG expression. RNA was extracted from Ishikawa cells cultured under the same conditions as (D). ID1 (E) and SLUG (F) mRNA expression was evaluated with qRT-PCR. mRNA expression was normalized relative to no stimulation. (G) TWSG1 decreases BMP7-enhanced sphere formation. Ishikawa cells were incubated with or without 20 ng/mL BMP2, 50 ng/mL BMP7 and 1000 ng/mL TWSG1 for eight days, where spheres were later counted using a microscope. (H) TWSG1 suppresses BMP7-induced EC cell migration. Ishikawa cell cultures were subjected to a scratch, after which cells were incubated in the absence or presence of 20 ng/mL BMP2, 50 ng/mL BMP7 and 1000 ng/mL TWSG1 in 3% FBS-containing medium; after 48 h, the widths of the scratches were determined. The results in panels A, E–H are shown as the mean ± SE. * p-value < 0.05, ** p-value < 0.01.