Poxviruses possess a single, linear double-stranded DNA (dsDNA) genome, which ranges in size from 127 to 456 kb and encodes several hundred gene products. Unlike most other DNA viruses, poxviruses replicate exclusively within the cytoplasm of permissive cells.

Members of the family Poxviridae can infect a diverse range of vertebrates and invertebrates, although some poxviruses have narrow host ranges and others have very broad host ranges [1]. Poxvirus infections have posed serious threats to both humans and animals worldwide [2]. Poxviridae is a large family of DNA viruses comprised of two subfamilies: Chordopoxvirinae and Entomopoxvirinae. There are currently 18 recognized genera of Chordopoxvirinae, which infect vertebrates, and 4 genera of Entomopoxvirinae, which infect invertebrates [1]. Poxviruses possess a single, linear double-stranded DNA (dsDNA) genome, which ranges in size from 127 to 456 kb and encodes several hundred gene products. Unlike most other DNA viruses, poxviruses replicate exclusively within the cytoplasm of permissive cells [3].
One of the best known poxviruses is variola virus (VARV), a member of the orthopoxvirus genus. VARV is the causative agent of human smallpox, which was one of the most devastating human diseases in history [4]. Despite the success of global smallpox eradication through a vaccination campaign led by the World Health Organization, other pathogenic poxviruses, such as monkeypox virus, cowpox viruses (CPXV), camelpox virus, tanapox virus, and capripoxviruses remain threats to human and animal health [1][2][5][6]. The most intensively studied poxviruses, such as vaccinia virus (VACV) and myxoma virus (MYXV), have proven to be excellent research models to study host innate recognition and virus–host protein interactions and have provided important insights into the fields of virology and immunology [7][8]. In turn, these fundamental insights have direct translational applications to improve the development of safer and more effective attenuated viral vectors for vaccines, cancer therapeutics, and other treatment modalities [9]. For example, in VACV inactivation of either IL-1β-binding protein or IL-18-binding protein, encoded by B15R and C12L, respectively, enhanced CD8+ T cell memory responses after immunization and improved the protection against virulent VACV WR challenge [10][11]. In addition, VACV has the genomic capacity to incorporate >25 kb of foreign DNA without noticeable impacts on viral replication. This capacity has been employed to genetically engineer VACV chimeras carrying multiple heterologous genes, as both polyvalent vaccines and treatment of various genetic diseases [12][13][14][15]. Multiple poxviruses are being investigated for use in oncolytic virotherapy. Myxoma virus (MYXV) is one such preclinical candidate oncolytic virus, and recombinant MYXV lacking various viral death modulator genes, such as M-T5 [16], M11 [17], M13 [18], and Serp2 [19], have enhanced anti-tumor activity that appears to be mediated through viral induction of programmed cell death rather than through viral replication (reviewed in [20]).
The recognition of viral pathogens and the host defense against them are provided by the innate and adaptive immune systems. The adaptive immune system is broadly comprised of antigen-specific CD8+ T cells, CD4+ helper T cells, and B cell antibody responses for specific, anamnestic protection against distinct pathogens [21][22][23]. Prior to the initiation of the adaptive immune response, pathogen-associated molecular patterns (PAMPs) derived from poxviruses, such as DNA and RNA, as well as envelope or core proteins, can be sensed by a diverse set of pattern recognition receptors (PRRs) to initiate the faster but less specific innate immune responses [24][25][26][27][28][29][30][31]. The innate immune response provides the first line of host defense and includes antiviral proteins that can lead to the direct elimination of viruses or induce the expression of type I interferons (IFNs), proinflammatory cytokines, chemokines, and other antiviral proteins [32][33]. These effector molecules mediate direct antiviral effects or orchestrate the adaptive immune response to contain poxvirus infections at various stages. In particular, type I IFNs, the hallmark effector of antiviral responses, are essential to initiate innate immunity and also to mediate the subsequent development of adaptive immunity against invading poxviruses [34]. In addition, type I IFNs upregulate the expression of hundreds of IFN-stimulated genes (ISGs) that directly influence protein synthesis, cell growth, and survival to establish an antiviral state [35][36]. Furthermore, multiple cytokines, such as interleukin-6 (IL-6), IL-12, and tumor necrosis factor-alpha (TNFα), can be induced during poxvirus infections which then act systemically to induce immune responses [37][38].
Over recent decades, substantial progress has been made in defining the roles of PRRs and the subsequent signaling pathways that are involved in the sensing of and response to poxviruses. IFN expression is transcriptionally regulated through activation of IFN regulatory factor (IRF) family members or coordinated activation of IRFs and nuclear factor kappa B (NF-κB) [39]. The stimulation of proinflammatory genes depends on activation of the transcription factors NF-κB and activator protein 1 (AP1) [40]. Despite the diversity of PRR ligands, many PRR-regulated signaling pathways share common downstream molecules, such as myeloid differentiation primary response gene 88 (MyD88) and Toll/interleukin-1 receptor domain-containing adapter-inducing interferon-β (TRIF). Thus, there is substantial crosstalk and overlap between the signaling cascades stimulated by different PRRs, which lead to IFN activation and also drive the production of other cytokines [41][42][43].
A broad spectrum of PRRs has been implicated in poxvirus recognition, including RNA sensors, cytosolic DNA sensors, multiple Toll-like receptors (TLRs), and components of the inflammasome. In order to establish successful infections in the face of this multi-pronged immune response, poxviruses evade host antiviral responses by expressing a variety of viral proteins. Those viral proteins interact with and antagonize the key components of these intracellular signal transduction pathways.

Inflammasomes are multiprotein signaling complexes responsible for the production of proinflammatory cytokines and the induction of pyroptosis, an inflammatory lytic programmed cell death, to halt viral replication and induce nearby cells to adopt antiviral states [44]. Inflammasome activation mediates the conversion of inactive precursor proteins pro-interleukin (IL)-1β and pro-IL-18 into the bioactive forms IL-1β and IL-18, which play important roles in host defense against a variety of bacterial, fungal, and viral infections [45][46]. Certain PRRs have been implicated in canonical inflammasome assembly, including NOD-like receptors and AIM2-like receptors [47][48]. After PAMP and cell damage-associated signal recognition, adaptors are recruited, such as apoptosis-associated speck-like protein (ASC) [49]. This process results in cytokine secretion and pyroptosis as proteolytically active caspases mediate the maturation and secretion of proinflammatory cytokines IL-1β and IL-18, while cleavage of gasdermin-D (GSDMD), a key pyroptotic substrate of inflammatory caspases, induces pyroptosis (Figure 1) [50]. Specifically, the inflammasome proteins NACHT, LRR, and PYD domains-containing protein (NLRP3) and AIM2 have been implicated in the recognition of poxvirus infections [29][30][51]. 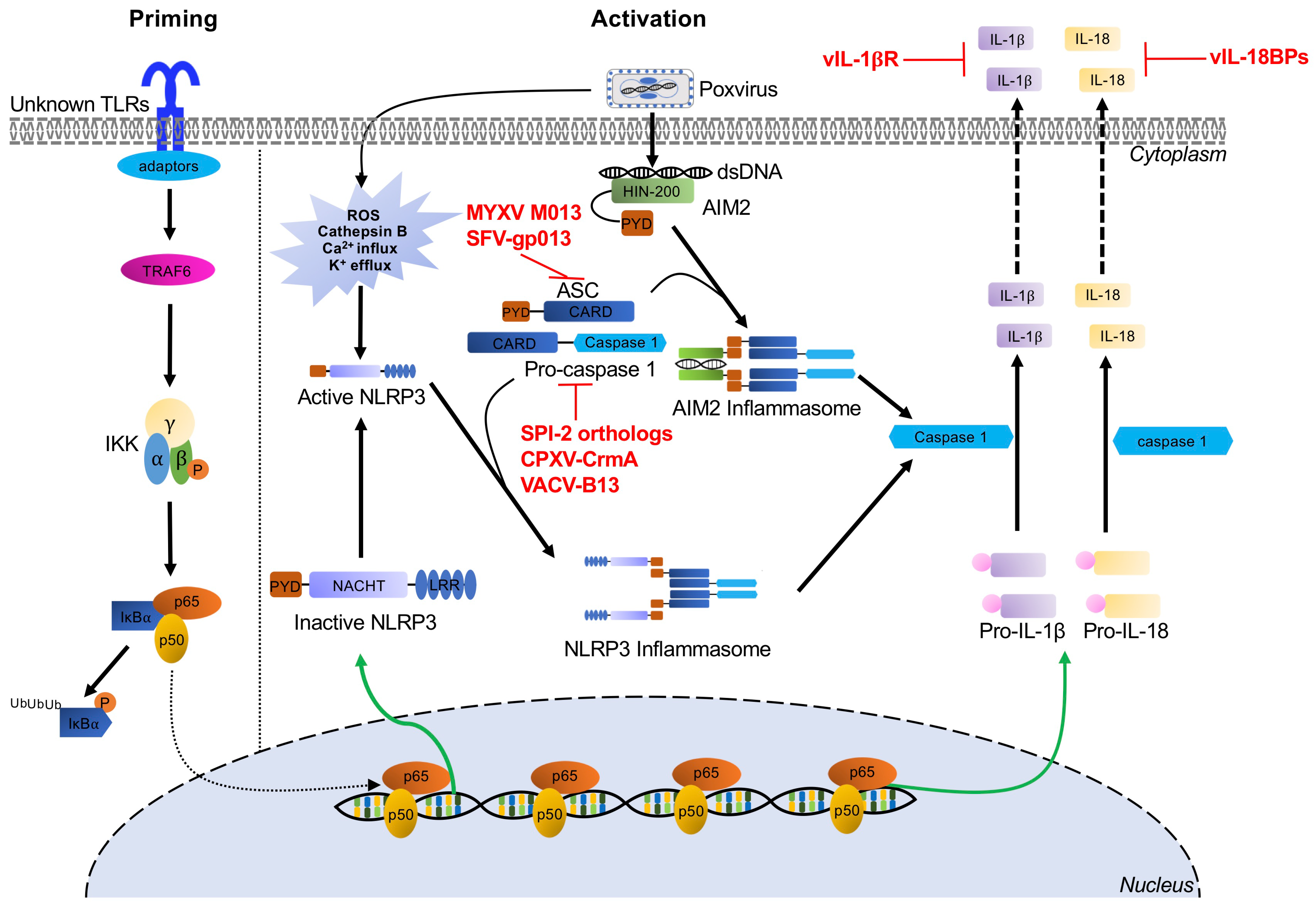 In this review, we have discussed multiple PRRs and their roles in sensing poxviruses infections and subsequently initiating innate immune responses. Individual PRRs have unique molecular mechanisms for sensing ligands and triggering antiviral responses via diverse adapters and effectors. Furthermore, redundancy, cooperation, and crosstalk among the various PRRs increase this complexity. This crosstalk and redundancy in immune pathways are also reflected in the viral antagonists, with multiple PRR pathways targeted by the same viral proteins. For example, E3 binds dsRNA and blocks the activation of PKR, OAS/RNase L, and TLRs [52][53][54][55]. However, it is currently an open question as to whether these multiple functions, for E3 and other antagonists, are truly redundant, or if there are situational differences in the activity of E3 against various pathways. Thus, the overall picture of host recognition of poxviruses is multifaceted and far from clear. Investigation of the cooperation and crosstalk between PRRs will help define the innate immune network(s) elicited by these various PRRs both individually and in combination.
On the other side of this battle, the specific poxviral ligands are not yet known for all of these PRRs. Identification of these ligands, characterization of their structures or motifs, and their interactions with the sensors themselves are necessary to reveal how the signal is initiated by receptors during infection of poxviruses. Furthermore, the molecular mechanisms underlying cell type-specific or virus-specific recognition and signaling by certain PAMPs during poxvirus infections are still largely unknown. Finally, it is becoming more apparent that the diversity in the poxvirus family is also reflected by the range of activities discovered for individual viral gene orthologs, and their implications for viral host range and virulence. This observation is most strongly supported for rapidly evolving genes such as viral immune regulators and their implications for virus host range and virulence [4][56][57][58]. Therefore, the data presented in this view representing the response to a handful of poxviruses may not capture the full spectrum of poxvirus responses, and viral orthologs from other poxviruses should also be examined.