RNA helicases constitute a large family of proteins with functions in all aspects of RNA metabolism, including unwinding or annealing of RNA molecules to regulate pre-mRNA, rRNA and miRNA processing, clamping protein complexes on RNA, or remodeling ribonucleoprotein complexes, to regulate gene expression. RNA helicases also regulate the activity of specific proteins through direct interaction. Abnormal expression of RNA helicases has been associated with different diseases, including cancer, neurological disorders, aging, and autosomal dominant polycystic kidney disease (ADPKD) via regulation of a diverse range of cellular processes such as cell proliferation, cell cycle arrest, and apoptosis.

RNA helicases are ubiquitous, highly conserved enzymes that involve in nearly all aspects of RNA metabolism. RNA helicases use ATP to bind or remodel RNA, RNA secondary structure or ribonucleoprotein (RNP) complexes that are associated with RNA transcription, degradation, translation initiation, mRNA splicing, and ribosome biogenesis [1][2][3]. RNA helicases are grouped into various superfamilies dependent on the contents of conserved motifs. Most of RNA helicases relate to the superfamily 2 (SF2) of helicases comprising eleven subfamilies, five of which are termed the DExH/D helicases (DEAD-box, RIG-I-like DExH, SKI2-like DExH, viral DExH, and DEAH/RHA) with a conserved motif (Asp-Glu-Ala-Asp/His) [4]. Members of the DEAD-box (DDX) and DExH box families share a similar three-dimensional core structure containing a minimum of 12 conserved amino acid motifs, comprised of two tandemly repeated RecA-like domains [1][3]. The RecA domain 1 includes the ATP binding motifs (Q motif, I motif, and II motif), the ATP hydrolysis motif III, and the RNA-binding motifs (Ia motif and Ib motif) (Figure 1). The RecA domain 2 consists of the RNA-binding motifs (IV and V) and motif VI, which may regulate ATPase and unwinding activities [3][5]. Previous studies indicate that motifs Ia and Ib are structurally similar to motifs IV and V, respectively, which should have similar functions [6]. The N- and/or C-terminal extensions of most of the RNA helicases are able to interact with specific RNA or protein cofactors. This family of DEAD-box RNA helicases is able to unwind and restructure RNA molecules in an ATPase-dependent manner (Figure 2) [7][8].

2. The Role of RNA Helicases in Regulation of Cell Cycle Progression

DDX3/Ded1 is one of the most widely studied DEAD-box RNA helicases. DDX3 regulates RNA metabolism, including transcription, pre-mRNA splicing, RNA export, and translation, which plays a critical role in many biological processes [9]. DDX3 also promotes phase separation when it interacts with ATP [10]. DDX3 also regulates cell apoptosis via the p53 signaling pathway during embryonic development in animal models [11]. Dysregulation of DDX3 plays a critical role in various diseases, including inflammation, viral infection, neurological disorders, and cancer [10][12]. The role of DDX3 in oncogenesis is related to the regulation of cell growth, cell cycle, and cell survival. Increased DDX3 expression promotes cancer cell growth in medulloblastoma, colorectal, breast, prostate, and lung cancer [9][13][14][15], whereas depletion of DDX3 induces cell cycle arrest in the G1 phase in cancer cells of those cancers (Table 1) [9][16][17][18][19]. Knockdown of DDX3 also inhibits cell cycle progression by blocking entry into the S phase. Mechanically, DDX3 facilitates translation initiation of the cell cycle regulator cyclin E1 mRNA via its 5′ UTR [20]. In addition, DDX3 inhibits the expression of Krüppel-like factor 4 (Klf4) by altering its mRNA splicing, resulting in an upregulation of the expression of CCNA2 and CDK2 [16]. In sum, DDX3 promotes G1/S transition by promoting cyclin E1 translation, suppressing KLF4 expression, and promoting CDK2 expression (Figure 2). 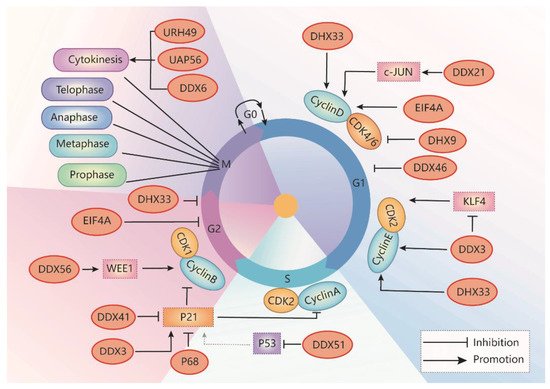 During the S phase of the cell cycle, genetic materials, such as DNA, are synthesized for the duplication of the chromatin and reproduction of the whole genome, which is a pre-requisition for cell division. Once cells enter the S phase, cyclin E/CDK2 complex needs to be silenced to eliminate the DNA re-replication [21]. Dissociation of CDK2 from cyclin E/CDK2 complex results in its association with the newly synthesized cyclin A to form CDK2/cyclin A complex, which can phosphorylate proteins that are necessary for completion of the S phase. Alternatively, spliced p53 isoform (Delta-p53) transactivates the expression of endogenous p21, resulting in the inhibition of CDK2/cyclin A activity to and attenuate S phase progression [22].

In the cell cycle, the G2 phase is the second gap for cells to prepare for mitosis (M phase). During the G2 phase, cyclin A is degraded, but cyclin B is synthesized, resulting in the association of Cdc2 with cyclin B, which is required for the initiation of mitosis. Cyclin B can be phosphorylated at Tyr15 by WEE1, a kinase of the WEE family, resulting in altering equilibria and affecting G2/M transition [23][24]. The initiation of G2 arrest, triggered by DNA damage or inappropriate replication, is important for DNA damage repair, which can be regulated through p53 mediated signaling pathways [25]. In addition, p21, as the downstream target of p53, is able to inhibit the activity of Cyclin A, Cyclin D, and other cell-cycle-related proteins, including cdc2 [26]. Different RNA helicases are associated with G2/M arrest.

Cytokinesis is the last step of the cell cycle in which the cell must devotedly split the chromosomes and cytoplasm to produce two daughter cells with equal contents [27]. RNA helicases are involved in the key steps of cytokinesis, including the assembly and contraction of the contractile network, the formation of the mitotic spindle, and the interaction between the microtubule and cortical actomyosin cytoskeleton [28].

CDK inhibitors (CKIs) are mainly identified in CIP/KIP and INK4 families, which are key regulators of G1, S, and G2 phase transitions during the cell cycle [29]. The CKI inhibitors in the CIP/KIP family, including p21, p27, and p57, target CDK1, CDK2, CDK4, and CDK6. The CKI inhibitors in the INK4 family, including p15, p16, p18, and p19, also targets CDK4 and CDK6. The expression and stability of CKIs are regulated by multiple mechanisms, including transcriptional, post-transcriptional, epigenetic regulation, and ubiquitin-dependent or independent protein degradation. P21 is one of the most studied CDK1 inhibitors, which was first identified as a CDK-interacting protein (CIP1) and wild-type p53-activated factor 1 (WAF1). P21 can bind to cyclin A/CDK2 [30], cyclin E/CDK2 [31], cyclin D/CDK4 [32], and cyclin B/CDK1 complexes [33], resulting in cell cycle arrest in the S phase, G1/S transition, and G2/M transition. We will discuss how p21 is regulated by different RNA helicases.

Table 2. The Structures and Sites of Action of RNA Helicase Inhibitors in Diseases.

3.2. The Therapeutic Potential of RNA Helicase Inhibitors in the Treatment of Various Disorders

As described above, different inhibitors of RNA helicases have been developed, which may potentially be used in disease treatment [17][34][35]. The DDX3 inhibitor, NZ51, is able to block the ATP-dependent helicase activity of DDX3. NZ51 suppresses DDX3 activity at low micromole concentration and displays anti-proliferative activity by inhibiting cell replication at the G1 phase in aggressive breast cancer cells [12][19]. However, treatment with NZ51 did not significantly reduce tumor growth in breast cancer mouse model [19]. Doxorubicin, an antitumor drug, can inhibit the ATPase activity of DDX3, which shows anticancer activity on human oral squamous cell carcinoma cells. However, the cardiotoxicity is a limitation for doxorubicin in vivo [36]. The DDX3 inhibitors, RK-33, can bind with the ATP-binding domain of DDX3 to block its helicase activity.

DDX5 (p68) can be phosphorylated at the Y593 site by growth factors, including platelet-derived growth factor, to increase cellular proliferation, epithelial to mesenchymal transition (EMT), malignant transformation, cell migration, and oncogenesis through translocation of β-catenin to nuclear and activation of cyclin D1, c-JUN, and c-MYC [39].

Pericentriolar material is defined as a matrix of proteins surrounding the two barrel-shaped centrioles during mitosis, which serves as a platform for protein complexes to regulate organelle trafficking, protein degradation, and spindle assembly.

Stress granules are RNPs that assemble in response to environmental stresses such as oxidative stress, heat shock, or osmotic shock. One component of yeast stress granules is Ded1p, also named DDX3 in mammalian. Temperature-driven liquid phase condensation of Ded1p induces the sequestration of housekeeping mRNAs and promotes an expanded heat shock response in program results of the preferential expression of stress proteins at 39 °C [41].

P bodies are the large cytoplasmic granules, which are membrane-less cytoplasmic organelles that form via phase-separation once RNAs and nearby RBPs assemble into ribonuclear particle (RNP) granules. P bodies have all the key characters of LLPS, which are liquid-like, spherical, and dynamic, and can be dissolved by the alcohol 1,6-hexanediol.

P granules are RNA/protein condensates in the germline of Caenorhabditis elegans. P granules are membrane-less organelles that may assemble by intracellular phase separation. GLH-1, a germline putative RNA helicase, regulates the formation and disassembly of P granules coupling with distinct steps of its ATPase hydrolysis cycle [42].

DDXs globally promote phase separation in their ATP- and RNA-bound state. ATP hydrolysis induces the release of RNA clients from a DDX, results in the disassembly of RNA-containing membrane-less organelles [40]. The condensates formed by 2NT-DDX4YFP, a recombinant protein, dissolve during mitosis and leads to increasing of noise in protein concentration.