cAMP was first discovered in 1958 and introduced the concept of a “second messenger” system. In fact, this molecule, together with cyclic guanosine monophosphate (cGMP), has been identified as an important intracellular translator of membrane signaling originating from hormones, growth factors, cytokines and other molecules. In the general transduction mechanism, the stimulated receptor activates the corresponding G-coupled protein, leading to increased adenylyl cyclase-mediated cAMP synthesis.

The biliary tree is lined by epithelial cells (i.e., cholangiocytes), which appear to originate from a common stem cell compartment, the hepatic progenitor cells, similar to hepatocytes [1]. These pluripotent cells are located at the interface between the hepatocyte canaliculi and bile ductules in the canals of Hering (Figure 1), the latter being the smaller branches of the biliary tree [2]. 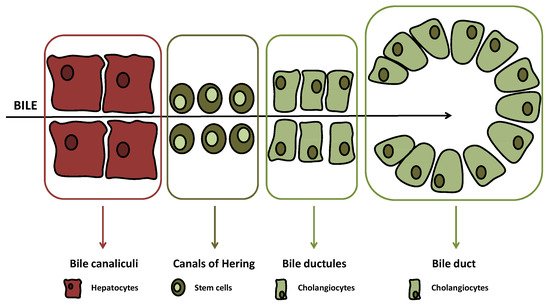 Figure 1. The main cells and ultrastructural districts encountered by the bile (black arrow) while moving from the hepatocytes to the bile ducts.

(≤15 μm in diameter) or large ducts (≥15 μm in diameter) While, at the beginning, just bile duct secretory activities were studied with regard to biliary tract diseases, lately also, biliary proliferative phenotypes have gained interest [3][4][5]. For instance, atypical cholangiocyte proliferation, characterized by truncated tortuous bile ducts, has been observed in adult cholestatic liver diseases such as primary biliary cholangitis (PBC) and primary sclerosing cholangitis (PSC) [6][7]. Both diseases are defined as ductopenia, since changes and evolution of proliferation determine a reduction of total bile ducts in the end [8].

In cholangiocarcinoma (CCA), cellular growth and expansion also deserve interest as possible targets for therapy. Several molecular cascades such as the Janus kinase/signal transducer and activator of transcription, p38 MAP kinase (MAPK), Akt (AKA, protein kinase B, PKB) or fibroblast growth factor/fibroblast growth factor receptor may stimulate cell growth and impact biliary proliferation [9][10]. In this review, after a general description of cAMP signaling and its role in parenchymal and biliary cell functions, we will discuss the most recent findings regarding the relationship between the cAMP-dependent pathway and cancer of the biliary tract (e.g., cholangiocarcinoma).

The role of cAMP and its main effector PKA in cancer has been recognized [14], and targeting of this signaling axis has been identified as a possible strategy for cancer therapy [15]. For instance, in tumor spheres obtained from a primary cell culture of medulloblastoma, cancer growth was inhibited by forskolin and enhanced by PKA inhibition [16]. Since PKA composed of an RI subunit was linked to increased proliferation, and enhanced expression of the RIα-type was observed in tumors, in the early 1990s, a study with an antisense oligonucleotide-repressing RIα was conducted on cancer cells [17]. Two trials were registered with 8-Cl-cAMP, one (Phase II, NCT00004902) on multiple myeloma and one (Phase I, NCT00021268) on colon cancer [18].

Incidences of CCA change widely among different countries, ranging from 85 to less than 1 out of 100,000, thus reflecting the prevalence of some risk factors such as parasitic infections (Clonorchis sinensisandOpisthorchis viverrini), biliary tract disorders (PSC, hepatolithiasis, biliary cystic diseases) and also inflammatory bowel diseases [19]. Intrahepatic (iCCA), perihilar (pCCA) and distal (dCCA) forms are recognized with different prevalence and prognoses [20]. Histological classification is complex since heterogeneity is found in genetic alterations, pathogenesis and cellular origin, which are all factors contributing to a variable morphological picture [21]. In this perspective, since cAMP signaling plays an important role in the normal proliferative activity of cholangiocytes, it is likely that changes to this pathway may occur in biliary tract cancer.

A study examined the relationship between cAMP and secretin stimulation in CCA cell lines [22]. More interestingly, stimulation of CCA cell lines with secretin did not increase intracellular cAMP levels so that proliferative activities were not enhanced. This was also confirmed in an in vivo model of Mz-ChA-1 xenotransplantation in nude mice, where tumor growth was delayed by secretin treatment. The opposite effect of secretin on CCA cell growth was related to an aberrant (cancer-related) coupling of the secretin receptor with Gαirather than Gαs(Figure 2). 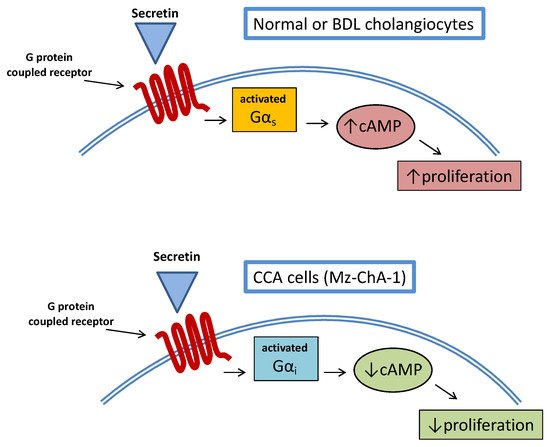 Figure 2. The mechanism and opposing effect of secretin-stimulated G-protein-coupled receptor on normal (or BDL) cholangiocytes and CCA cells (Mz-ChA-1 line).

This study also had the merit of demonstrating once again the complex interplay between CCA and cAMP signaling, evidencing a mechanism similar to what was already observed, upon stimulation of the TGR5 receptor in cholangiocytes’ cilia [23]. A number of studies suggest a multifaceted interaction between hormones/neuropeptides and cAMP signaling with regard to CCA growth.

Other studies examined the possible role of the BA receptor TGR5 (known as a significant stimulator of cAMP/PKA signaling in cholangiocytes) [24] in CCA growth. These observations underscore the differential and complex effect of TGR5/cAMP signaling in cholangiocytes, according to different species and conditions. In fact, while in H69 human biliary cells (both ciliated or non-ciliated), TGR5–induced proliferation is strictly related to fluctuations of cAMP levels [24], in murine cholangiocytes and human CCA cell lines (EGI-1 and TFK-1). cAMP further studies, possibly on human tissue, would be needed to improve our knowledge of the TGR5/cAMP relationship in cholangiocytes and possible targeting in CCA.

CCA is a severe disease and we are still in search of appropriate treatment. While a limited number of patients may undergo surgical resection with improved survival, the majority of subjects harboring CCA are expected to die within one year of diagnosis [25]. Several efforts have been made in preclinical studies to identify possible strategies for CCA systemic therapy [26]. Targeting genetic aberrations or the use of immune checkpoint inhibitors represent possible opportunities in the future [27]; however, exploring new pathways for therapy seems wise given the suboptimal results of the current medical practice. cAMP/PKA signaling is a highly conserved pathway in eukaryotic cells and its important contribution in parenchymal and non-parenchymal epithelial liver cell growth has been largely demonstrated. Since important changes to this pathway occur in several human cancers, its targeting has been attempted with antisense oligonucleotide or cAMP analogs in preclinical models. Data on CCA when employing this approach are scanty, despite the fact that cAMP/PKA signaling has been demonstrated to be of paramount importance in the regulation of cholangiocyte proliferative activities in physiologic conditions and during damage. Moreover, as cholangiocytes are the main liver collectors of several hormones, neuropeptides and angiogenic factor signals employing cAMP as a second messenger, the possible modulation of this pathway employing these molecules may be hypothesized. In this context, we demonstrated that secretin receptor stimulation in CCA cells is not followed by the physiologic increase of cAMP that supports proliferation as observed in normal cholangiocytes. Also, the stimulation of α2-AR and GABA receptors (using cAMP as a second messenger) seems to inhibit CCA growth, suggesting possible anticancer activity. Finally, TGR5, another G-protein-coupled receptor, is constitutively overexpressed in CCA, where it sustains tumor expansion and diffusion with a mechanism partially involving cAMP and different from what is observed in normal cholangiocytes. These and other findings suggest that the study of cAMP signaling in CCA may be useful to understand the differences between normal and neoplastic biliary cells and help to design strategies to abolish or mitigate cancer growth with systemic therapy.