TiO2NFs have important applications in different fields, including catalysis. They are used as a catalyst and a photocatalyst. Most of the TiO2NF-supported catalysts were utilized as photocatalysts in the AB reaction; hence, photocatalysis will be explained in more detail before the discussion of the electrospun photocatalysts.

Electrospun NFs have many outstanding characteristics that make them promising catalytic materials. Some of the properties of electrospun NFs are shown in Figure 1. Contrary to NPs, a mesh of fibers is self-supporting, and its high porosity and other characteristics provide several reaction sites. The stable structure of the nanofibrous membrane ensures a consistent and predictable reaction rate and poses minimum issues of the agglomeration of the catalytic material [1]. 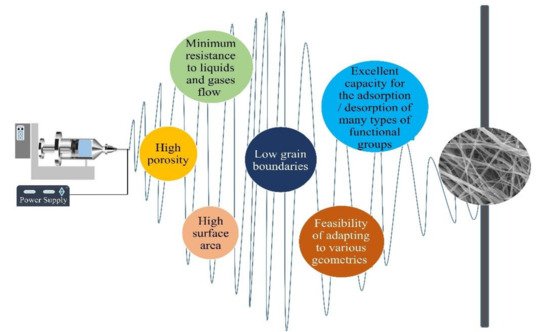 Historically, several methods have been applied to produce fibers of different dimensions. These methods include drawing, self-assembly [2][3], phase separation [3][4], template synthesis [3], and electrospinning (ES) [5][6][7][8][9][10][11][12]. Each production technique has its merits and demerits, and ES has been acknowledged as one of the most effective techniques to produce polymeric and ceramic fibers [5][8][12][13][14][15]. ES is cost-effective and can fabricate fibers continuously. This process fabricates fibers with controlled dimensions and desired structures. The diameter of the produced fibers can be achieved on the nanometer scale. The ES device generally comprises a reservoir of polymer dispersion solution with a pump, high-voltage source, nozzle, and conductive collector, as shown in Figure 2.
Organic and inorganic NFs can be fabricated using electrospinning. Polymers are involved in the fabrication of both types either as the raw material, in the case of organic NFs, or as a fabrication support, in the case of inorganic NFs.
In fact, wide ranges of natural and synthetic polymers have been electrospun to fabricate polymeric NFs for various applications. Polymers such as polyvinylpyrrolidone (PVP), polyacrylontrrile (PAN), poly(vinylacetate) (PVAc), polyvibyl alcohol (PVA), polyimide (PI), polyethylene oxide (PEO), polyvinylodene fluoride (PVDF), polystyrene (PS), and polyethersulfone (PES) are the most common electrospun polymers [16][17][18].
Polymers are also used to facilitate the fabrication of ceramic electrospun NFs. Ceramic precursor solutions do not possess sufficient viscosity to make a jet during electrospinning. Therefore, polymers are added to the electrospinning ceramic solutions to increase the viscosity to ensure successful electrospinning.
Sol–gel method, which includes a polymerization stage, is usually used in the fabrication of ceramic NFs via electrospinning. The electrospinning solution is prepared by adding ceramic precursors to a viscous polymer solution [19]. The metallic precursor and polymer mixture have to be completely miscible to form the gel network. Electrospinning of the sol–gel polymer solution can form either:

It is very important to note that the choice of the polymer, ceramic precursor, solvent, and additives, such as surfactants and salts, greatly affects the final properties of the electrospun polymer and ceramic NFs. For example, to prepare inorganic NFs, it is recommended to use metal acetates as a metallic precursor. Metal acetates are able to participate with the proper polymers in the polycondensation reactions to produce electrospinable sol–gels.
Based on the electrostatic field between the nozzle and collector, the electrospun fibers are collected on the surface of the collector screen. Many parameters influence ES operations and the characteristics of the produced fibers, including the type and nature of the collector, the voltage applied, the distance between the nozzle and collector, and the dispersion flow rate.
Electrospun fibers have extensive applications in industries such as air filtration, water purification [20][21], fabrication of sensors and biosensors [22], medical and biomedical applications (e.g., soft-tissue engineering, encapsulation of bioactive species, regenerative medicine, drug delivery fuel, and cell membranes) [22][23], antibiotics [24][25][26][27], environmental protection [28], smart textiles, surface coatings, and energy harvesting [10][29], conversion, catalysis [11][30], and storage, among others. Several valuable reviews have been published for the utilization of electrospun NFs in different application areas; a list of some of them is provided in Table 1. Nonetheless, there are no recent comprehensive reviews on the applications of electrospun ceramic NFs in catalysis for H2 production from AB yet. In this paper, an effort has been made to develop such a comprehensive review of the published literature on the applications of electrospun NFs as AB hydrolysis catalysts. It worth mentioning that the studies by Ayman et al. and Nasser et al. have contributed the most in the search for effective electrospun catalysts for AB hydrolysis [31][32].
Table 1. A list of reviews published for various applications of electrospun NFs.