Melanomas of the skin are poorly circumscribed lesions, very frequently asymptomatic but unfortunately with a continuous growing incidence. In this landscape, one can distinguish melanomas originating in the mucous membranes and located in areas not exposed to the sun, namely the vulvo-vaginal melanomas. By contrast with cutaneous melanomas, the incidence of these types of melanomas is constant, being diagnosed in females in their late sixties. While hairy skin and glabrous skin melanomas of the vulva account for 5% of all cancers located in the vulva, melanomas of the vagina and urethra are particularly rare conditions. The location in areas less accessible to periodic inspection determines their diagnosis in advanced stages, often metastatic.

Melanoma is an extremely aggressive tumor with a high metastatic rate, whose diagnosis in advanced stages was associated, until a decade ago, with minimal chances of survival [1]. It is a tumor originating in melanocyte cells which are formed during embryogenesis from the neural crest of the trunk [2]. Melanocytes come from progenitor cells with a high migration capacity. This migratory capacity explains why they are distributed and present at the level of a large number of structures: the skin—the basal layer of the epidermis (with an important role in the uniform pigmentation by forming epidermal–melanin units)—the inner ear, gastrointestinal tract and the nerve structures [3]. The incidence of melanoma has seen a spectacular increase in the last two decades, with over 300,000 new cases in 2018, the most affected countries being Australia and New Zealand (over 33 cases/100,000 inhabitants), the average age of onset of melanoma being 65 years old [4][5]. Regarding the distribution according to sex, in the case of melanomas discovered in adulthood, there is a predominance of cases in males, with a reversal of the phenomenon for melanomas diagnosed between 15–39 years, over 60% of cases appearing in the female population [6][7]. An interesting phenomenon was observed in the young population diagnosed with melanoma, the cases experiencing an alarming increase between 1999–2006, with a decrease in the next 10 years, dynamics overlapping with the increasing popularity of photoprotection methods and awareness of the danger posed by tanning beds exposure [6][8]. Due to the poorly associated prognosis determined mainly by the discovery of melanoma in advanced stages, melanoma remains the skin cancer with the highest mortality, the 5-year survival rate being less than 80% and depending on the degree of local tumor extension, lymphatic invasion, and presence of metastases [9][10]. Although dermatoscopic evaluation has become essential in pigmentary lesions screening, the diagnosis of melanoma is difficult even for experienced dermatologists, the clinical and dermatoscopic appearance presenting a great variability and sometimes even possessing misleading histological aspects that can lead to false-negative results [9][11][12].
Melanomas with genital location are included in the category of rare neoplasms, vulvar and vaginal melanomas totaling less than 1–2% of all melanomas diagnosed in females [13][14]. Vulvar melanoma represents approximately 5% of all cancers located in the vulva, being more common in adulthood (average age is 68 years) [15][16]. Between 2.5 and 4.5 patients/100,000 inhabitants are affected each year by vulvar cancer, melanoma with this location being among the top four most common vulvar cancers, the most frequent being squamous cell carcinoma (over 75% of cases versus 5.6% for melanoma) [17][18].
On the other hand, vaginal melanoma is even a rarer condition, accounting for less than 0.05–0.1% of genital neoplasms [19]. The average age of onset is lower than in the case of vulvar melanoma (57 years), and the prognosis is much worse, less than a third of patients surviving 5 years after diagnosis, despite the correct instituted treatment [20]. In a study performed on 1400 patients with vulvar melanoma and 463 with vaginal melanoma, Wohlmuth et al. highlight the occurrence of the former at a significantly younger age (p < 0.001) [21].
Unlike cutaneous melanoma, which is much more common in Caucasians, the frequency of vulvar and vaginal melanomas has very little variability related to race, but there is a slight increase in frequency in Whites (3.14 vs. 1.02: 1) [22]. This increase is statistically significant for vulvar melanoma, but not for those with vaginal localization (p < 0.001) [21].

Melanoma, like most neoplastic pathologies, is a multifactorial disease, its occurrence being related to interactions between environmental and host factors, thus appearing as a consequence of genetic and epigenetic modifications that eventually lead to alteration of regulatory processes [23]. Although a number of risk factors involved in the etiopathogenesis of the disease have been identified for cutaneous melanoma, such as intermittent exposure with increased intensity to ultraviolet (UV) radiation, history of sunburns (more common at high latitudes), the presence of atypical nevi, specific skin phenotype (lightly pigmented skin, with light eyes, blond or reddish hair, presence of freckles), family history with specific genetic changes that alter the ultraviolets repair of melanocytes subjected to UV radiation, the use of Psoralen and Ultraviolet A therapy (PUVA) for a long time (over 15 years after exposure), the etiopathogenic mechanisms for vulvar and vaginal melanomas are not yet elucidated, and no specific factors involved in their occurrence have been identified [17][24][25][26][27][28]. Moreover, in a study published by Heinzelmann-Schwartzet et al., the onset of vulvar melanoma was regarded as spontaneous, de novo, with changes in a single melanocyte cell being enough to trigger the process of oncogenesis and determine the formation of melanoma [17].
However, there are studies that show a greater association between mucosal melanomas in general, and vaginal and vulvar melanomas in particular, and certain factors:
Sex. The female gender appears to be a risk factor for mucosal melanomas in general, which are twice as common as in men, compared to cutaneous melanomas whose distribution is similar between the two sexes [29].
Age. Vulvar melanoma is a disease that has an average age of onset of 68 years old, the risk of onset increasing with age (the number of cases increases from 0.11/1 million inhabitants for 15–29 years range, to 3.5/1 million inhabitants for those over 60 years old [30][31]). In contrast, cutaneous melanoma has a maximum incidence around the fourth decade of life [31].
Family history of cutaneous melanoma appears to be a risk factor for vulvar melanoma [32].
Ethnicity also seems to play an important role in the evolution of melanomas with genital localization and in their prognosis. Even if the association is not as strong as in the case of cutaneous melanomas, vulvar and vaginal melanomas are three times more common in the white race (p < 0.001) [22]. However, the prognosis has an inverse association, the mortality being much higher among the African population [33].
Lichen sclerosus is a precursor lesion of squamous cell carcinoma of the genital area which appears in its evolution in a percentage of approximately 5%, the causal link between the two pathologies being well known. Regarding the occurrence of vulvar melanoma in patients with lichen sclerosus, while a causal link has not been clearly established, although the number of reported cases is quite small, an increased incidence of vulvar melanoma has been observed among these patients (relative risk = 341) [34][35].
UV radiation. Though vulvar melanoma does not occur in photo-exposed areas, some studies suggest the indirect involvement of UV radiation in the pathogenesis of vulvar melanoma, through alterations of the immune response that favor modifications of the pathways involved in oncogenesis. However, it is important to note that the role of radiation in the pathogenesis of the disease is significantly lower than in skin melanoma [30].
Although the Human Papilloma Virus (HPV) is known for its roles in the development of benign (condyloma acuminata) and malignant tumors (invasive squamous cell carcinoma, anorectal cancers, penile cancers, squamous vaginal cancers) with genital localization, there is yet no mechanism to demonstrate its involvement in melanoma. There is no evidence that the HPV infection elevates the risk of vulvar or vaginal melanomas [28][36][37][38].

Unlike cutaneous melanoma which is most frequently distributed on photo-exposed areas (face, trunk, lower limbs) making it possible to diagnose it from early stages, vulvar and vaginal melanomas have origins that are generally overlooked by frequent inspection, the anatomical position of the lesion being the main reason for its late diagnosis and poor prognosis [39]. Melanomas of the vulvar region can occur in a variety of sites starting from the hairy skin of the labium majus to the introitus (Figure 1). The most common sites are the clitoris, the labia majora, and the labia minora, and in most cases, multiple tumors can be detected [30][40][41].
Vulvar and vaginal melanomas are pigmented lesions with variable diameters (generally over 7 mm), with macular (most frequently), papular or nodular appearance, most often asymmetrical and with an inhomogeneous appearance in terms of pigmentation [40][42][43]. There are also reports in the literature of cases with amelanotic manifestations of genital melanomas, especially at the vaginal level [20][44]. The first case of genital melanoma was described in 1861 in a 35-year-old patient who presented with multiple pigmentary lesions and evolved with neurological and digestive symptoms in the context of multiple secondary determinations and, subsequently, exitus [45]. Since then, multiple cases of vulvar and vaginal melanomas with various clinical, dermatoscopic aspects, and symptoms have been depicted in the literature (for additional details see [16][20]).
As it is a rare pathology, most of the clinical data presented in the literature are obtained from isolated case presentations or case series, most of which highlight the presence of genital bleeding, a palpable, white-gray color mass, itching, dyspareunia, yellow genital secretions, and local pain [46][47][48][49][50]. Cases that mention the presence of painless masses are also reported [51]. Most of the cases presented depict the tumor in the labia minora. The diagnosis is generally late, with half of the patients being diagnosed in advanced stages, with the invasion of deep structures [52]. 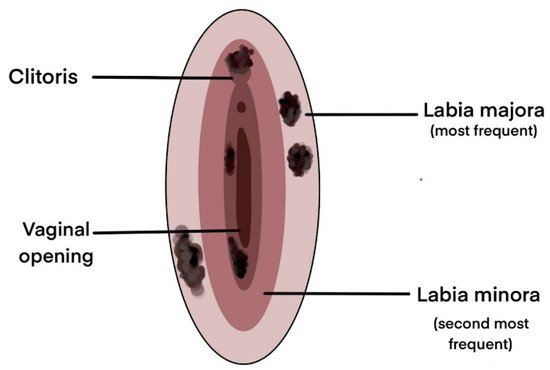 Figure 1. Most common sites for vulvar melanomas [15][32][43][53][54][55].
Although not so numerous and generally on small patient samples, there are prospective or retrospective clinical studies and meta-analyses that have highlighted the main clinical manifestations and the most common sites of vulvar and vaginal melanomas, which are further illustrated in Table 1.
Table 1. Clinical findings in melanoma of the vulva and vagina [15][56][32][43][53][54][55][57].
Regarding the dermatoscopic examination, it is characterized by asymmetrical, irregular aspects, both in terms of contour and pigmentation, lacking a clear structure. In addition, multiple cases report the presence of blue-gray or white-gray areas and globular punctiform black-brown structures [41][54].