Overactive bladder syndrome (OAB) is characterised by urgency symptoms, with or without urgency incontinence, usually with frequency and nocturia and severely affects the quality of life.

Overactive bladder (OAB) syndrome is characterised by “urinary urgency, usually accompanied by frequency and nocturia, with or without urgency urinary incontinence, in the absence of urinary tract infection (UTI) or other obvious pathology” [1]. The etiological factors of OAB can be neurogenic, myogenic and urotheliogenic [2][3]. Abnormal afferent excitability and central sensory processing are the neurogenic causes, and it is prevalent in patients suffering from Parkinson’s disease, multiple sclerosis and cerebrovascular disease [3]. Abnormal transmission of nonadrenergic noncholinergic neurotransmitter is another neurogenic factor that can also cause OAB [4]. The spontaneous contraction of the detrusor muscle (Figure 1) and hypersensitivity to incoming signals is a myogenic factor, whereas changes in ion channel, urothelial signalling and increased afferent activity are urotheliogenic factors [5][6][7]. Changes or disturbances in any of these factors, including any combinations, can cause OAB. Additionally, metabolic derangement, bladder inflammation (interstitial cystitis), and bladder obstruction due to benign prostatic hyperplasia may also cause OAB. These factors typically increase the excitability of the nerve, the detrusor muscle and alter the barrier and sensory functions of the urothelium [2][3]. 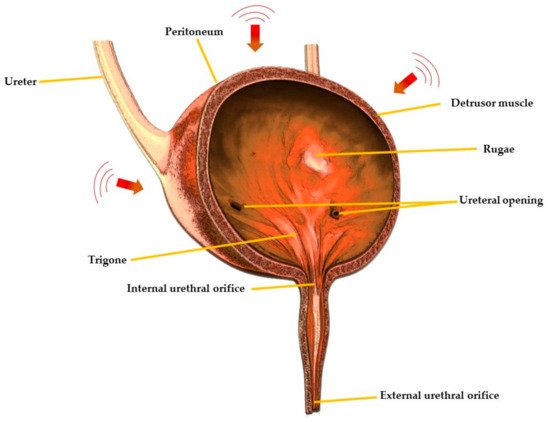 OAB management strategies include non-pharmacological and pharmacological approaches. Non-pharmacological interventions include behavioural and bladder training, whereas pharmacologic therapies include muscarinic receptor antagonists or anti-muscarinic drugs (tolterodine, solifenacin, darifenacin, propiverine, oxybutynin, trospium chloride), α-adrenoceptor antagonists (alfuzosin, doxazosin), β-adrenoceptor antagonists (terbutaline, salbutamol), vitamin D analogues (elocalcitol), a combination of drugs (anti-muscarinic + α-adrenoceptor antagonist), phosphodiesterase inhibitors (sildenafil, taladafil), cyclooxygenase inhibitors (flurbiprofen, indomethacin), voltage-gated calcium channel inhibitor (gabapentin), capsicum plant derived drug, capsaicin (8-methyl-N-vanillyl-6-nonenamide) and the µ-opioid receptor agonist, tramadol [8][9][10][11]. Various drug delivery routes including oral, transdermal, intravesical and vaginal are used for the administration of drugs for the treatment of OAB with the oral route being the most common due to ease of ingestion, increased patient compliance and safety [12]. Currently, anti-muscarinic drugs are the mainstay of oral pharmacotherapy for the treatment of OAB, however, they may be associated with troublesome side effects including constipation and xerostomia [13][14][15][16].

Transdermal drug delivery systems have proven to be an excellent for OAB patients owing to their painless approach, i.e., direct application of the drug formulation onto healthy and intact skin [17][18]. These systems possess many advantages over other drug delivery routes including non-invasiveness for patients suffering from needle phobia and dysphagia, thus providing a suitable alternative to parenteral and oral routes, as well as minimising the need for multiple administration, hence improving patient compliance [18]. Moreover, in some cases, this route provides enhanced transdermal absorption and improved bioavailability as it avoids pre-systemic metabolism [19].

Oxybutynin is an anti-muscarinic drug and is a selective M1 and M3 receptor antagonist [20]. The presence of both spasmolytic and anticholinergic properties makes it an effective therapeutic option for the treatment of OAB [21]. It is lipophilic and has a short half-life of 1–3 h. Transdermal delivery of oxybutynin is preferred over oral administration for the treatment of OAB as oral administration leads to the production of N-desethyloxybutynin, which is an active metabolite of oxybutynin subject to hepatic first-pass metabolism in the liver and gut and causes severe dryness of the mouth [22][23]. Conversely, transdermal delivery of oxybutynin decreases the onset of the active metabolite, hence reduce the drug induce xerostomia and increases the overall treatment adherence [24]. Various clinical trials have reported that transdermal delivery of oxybutynin is associated with a low incidence of side effects which led researchers to develop transdermal formulations using different polymers and permeation enhancers [25][26]. For example, oxybutynin bioadhesive films were prepared using polyvinyl alcohol (PVA) and sorbitol. The films showed good permeation characteristics across rabbit ear skin, oxybutynin permeation increased linearly for up to 7 h, and 50% of drug permeation was achieved after 24 h [27]. Banu et al., 2010 [28] also developed oxybutynin films containing 2% carbopol-934P and 30% polyethylene glycol which showed 87% drug permeation across rat abdominal skin, whereas the permeation from the formulation containing 2% of ethyl cellulose: carbopol-934P (1:3) and 30% polyethylene glycol was 88%. The results showed that the films were suitable for the transdermal administration of oxybutynin for the treatment of OAB.

Although the transdermal route provides many advantages, it is also associated with a few problems, one of which is skin irritation.

The vaginal route is hugely significant for drug delivery in women suffering from OAB. It has established merits compared with other routes enabling extended drug release and action. Also, avoidance of first pass metabolism may reduce dosing frequency which may improve patient compliance. The delivery of drugs via this route is considered favourable in managing overactive bladder and vaginal dryness simultaneously, which are common issues faced by human females after menopause [29][30][31][32][33][34][35]. Bioadhesive gels are the most commonly used therapeutic delivery systems to prolong the residence time in the vagina. Mucoadhesive gels of oxybutynin were developed using polymers such as Poloxamer 407, hypromellose K100M and chitosan.

Intramuscular route is another suitable alternative for the management of OAB. This route is suitable for unconscious patients or for drugs where pharmacokinetic findings recommend avoiding other routes of administration [36]. Microsphere based intramuscular formulations are designed to maintain drug release over a sustained period of time, reduce dose related adverse effects and improve therapeutic potential [37][38][39].

Oral pharmacotherapy is the mainstay of the treatment of OAB, especially for antimuscarinic drugs [40]. It is the most convenient and preferred route of drug administration due to ease of production, high patient compliance, cost-effectiveness and flexibility in dosage form [31]. However, the oral delivery of antimuscarinic drugs may lead to some side effects including constipation and xerostomia [13][14][15][16]. Extended release oral formulations are of enormous importance and provide great benefits. Propiverine is used for the treatment of OAB via the oral route and its solubility is pH-dependent which presents problems in the development of extended release formulations. Different coatings levels of Eudragit polymer and propiverine were applied to the citric acid crystals in a sequential manner to prepare extended release pellets.