Angiotensin-converting enzyme 2 (ACE2) is a transmembrane glycoprotein discovered in the year 2000 [1,2]. ACE2 gene is located on the X chromosome (cytogenetic location: Xp22.2) and consists of 18 exons that encode for protein of 805 amino acids. ACE2 is a type 1 integral membrane glycoprotein with two domains, the amino-terminal catalytic domain and carboxy-terminal transmembrane domain. The active domain of ACE2 is exposed to the extracellular surface, facilitating the metabolism of circulating peptides. ACE2 is constitutively expressed by epithelial cells of the lungs—more precisely, on the surface of type I and type II alveolar epithelial cells . ACE2 is also expressed in the vascular system—endothelial cells, migratory angiogenic cells, and vascular smooth muscle cells. In the heart, ACE2 is expressed in the cardiomyocytes, cardiac fibroblasts, coronary vascular endothelium and epicardial adipose tissue. In the kidneys, ACE2 was detected in glomerular endothelial cells, podocytes and proximal tubule epithelial cells. ACE2 is also expressed and functional in the liver, enterocytes of the intestines, and the central nervous system . ACE2 is a component of the renin—angiotensin—aldosterone system (RAAS), a hormone system important in the regulation of blood pressure, fluid and electrolyte balance and the regulation of the systemic circulation . Abnormal activation of the RAAS has been associated with the pathogenesis of hypertension, heart failure and renal diseases. Its involvement in the inflammation pathogenesis is also well known .

Chronic inflammatory lung diseases are characterized by uncontrolled immune response in the airways as their main pathophysiological manifestation. The lack of specific diagnostic and therapeutic biomarkers for many pulmonary diseases represents a major challenge for pulmonologists. The majority of the currently approved therapeutic approaches are focused on achieving disease remission, although there is no guarantee of complete recovery. It is known that angiotensin-converting enzyme 2 (ACE2), an important counter-regulatory component of the renin–angiotensin–aldosterone system (RAAS), is expressed in the airways. It has been shown that ACE2 plays a role in systemic regulation of the cardiovascular and renal systems, lungs and liver by acting on blood pressure, electrolyte balance control mechanisms and inflammation. Its protective role in the lungs has also been presented, but the exact pathophysiological mechanism of action is still elusive. The aim of this study is to review and discuss recent findings about ACE2, including its potential role in the pathophysiology of chronic inflammatory lung diseases:, i.e., chronic obstructive pulmonary disease, asthma, and pulmonary hypertension. Additionally, in the light of the coronavirus 2019 disease (COVID-19), we will discuss the role of ACE2 in the pathophysiology of this disease, mainly represented by different grades of pulmonary problems. We believe that these insights will open up new perspectives for the future use of ACE2 as a potential biomarker for early diagnosis and monitoring of chronic inflammatory lung diseases.

ACE2 has different roles ranging from a negative regulator of the renin–angiotensin system (peptidase-dependent) to an amino acid transporter and as a functional receptor for severe acute respiratory syndrome coronavirus (SARS-CoV) (peptidase-independent). ACE2 has an important role in the later stages of the RAAS cascade system by neutralizing the effect of accumulated Ang II. Ang II is hydrolyzed by ACE2 into the active product Ang 1-7, which interacts with Mas R. Binding of Ang 1-7 on Mas R promotes vasodilatation and decreases cell proliferation (Figure 2) [1][2]. It is known that in the lung, Ang II is able to induce bronchoconstriction, vasoconstriction, fibroproliferation, cytokine expression, and cell apoptosis, thus promoting tissue injury [3]. Therefore, in the respiratory system, ACE2 protects from lung injury [4], and it is possible that downregulation of ACE2 by SARS-CoV infection participates in the development of severe lung failure in SARS. 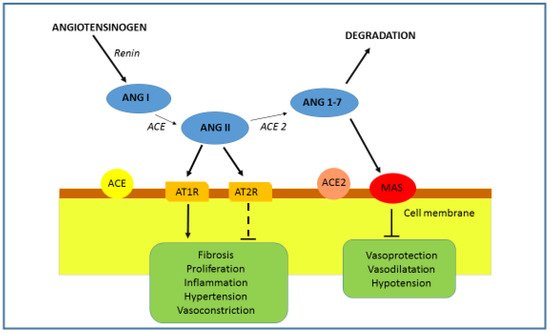 Figure 2. RAAS and ACE2. The role of ACE2 is the degradation of Ang II into Ang 1-7. The binding of Ang 1-7 on the Mas R results in an effect opposite to that of Ang II. By acting on the Mas R vasodilatation, anti-inflammatory, antihypertrophic, antiproliferative and antifibrotic effects are promoted.
RAAS could be activated/regulated in two opposite pathways, depending on physiological conditions. The classical pathway, formed by ACE/Ang II/AT1R, is associated with vasoconstriction, cell proliferation, organ hypertrophy, sodium retention and aldosterone release [5]. By the binding of Ang II to AT1R, the inflammatory cascade will be triggered and the NF-κB, STATs and MAPK pathways will be activated, stimulating the production of reactive oxygen species (ROS) and inducing apoptosis [6][7][8][9]. Another counter-regulatory, or vasodilator, pathway comprises the ACE2/Ang1-7/MasR axis, which is involved in vasodilation, anti-proliferation, anti-hypertrophy, cardio-protective and renoprotective actions [10]. Accordingly, the consequences of the ACE-AngII-AT1R axis could be reduced by activating the antagonistic ACE2/Ang1-7/MasR pathway.

As has already been mentioned, the RAAS functions through the ACE/AngII/AT1 and ACE2/AngI (1-7)/MasR axes with opposite effects [11][12]. Due to their effects on these signaling pathways, ACE inhibitors and angiotensin II receptor blockers (ARBs) are widely used in the treatment of arterial hypertension and heart failure. They inhibit the conversion of Ang I into Ang II and block the binding of Ang II to AT1R, respectively. It is worth mentioning that the blocking of the AT1R has been shown to have a favorable effect in the pathogenesis of acute lung injury [13][14]. The antihypertensive effects of RAAS blockade are also partly determined by the ability of both ACE inhibitors and ARBs to increase the circulating levels of Ang 1-7 [15]. Ang II increases sympathetic activity and enhances water retention in renal tubules, resulting in the increase in the systemic blood pressure [16]. In arterioles, Ang II binds to AT1R, leading to a cascade that results in potent arteriolar vasoconstriction. Ang II also promotes the secretion of antidiuretic hormone (ADH) by the posterior, which acts to the increase water reabsorption in the kidney. By binding to the hypothalamus, Ang II stimulates the feeling of thirst and increases water intake. By acting on the adrenal cortex, Ang II stimulates the release of aldosterone, a steroid hormone that causes an increase in sodium reabsorption, leading to increased osmolarity and volume of extracellular liquid (Figure 1) [17]. The excess of aldosterone results in hypokalemia and muscle weakness, while deficiency results in hyperkalemia and toxic effects on the heart [18].

Inflammation is the natural defense mechanism associated with many acute and chronic inflammatory diseases, including pulmonary diseases. It is a biological response of the immune system that can be triggered by a variety of factors. These factors include toxic compounds, pathogens and damaged cells. In the background of inflammation pathophysiology is the recruitment of the immune cells into the affected tissue aiming to remove the “danger signals”, such as pathogenic microorganism, irritants or dead cell debris. Most agents associated with chronic inflammation cause insidious but progressive and often extensive tissue necrosis accompanied by ongoing repair and fibrosis. The amount of fibrosis in the tissues is a function of the duration of chronic inflammation [19]. Chronic pulmonary diseases pose a significant public health problem, because their incidence is rising daily. It is well established that inflammation plays a key role in chronic pulmonary diseases, but the role of ACE2 in the pathophysiology behind these diseases is still not fully understood and somewhat contradictory [20][21]. It has been shown that the role of ACE2 in the pathogenesis of both chronic and acute inflammatory lung disease could be associated with promoting the ACE2/Ang1-7/MasR signaling pathway or the opposite ACE/AngII/AT1R pathway. Imai et al. demonstrated that ACE2 is protective in the mouse model of acute lung injury (ALI) induced by acid aspiration and sepsis. They showed that ACE2 knockout mice showed very severe disease when compared to wild-type mice. Loss of ACE2 expression in mutant mice resulted in enhanced vascular permeability, neutrophil accumulation, increased lung edema, and worsened lung function [12]. Additionally, in lung injury models induced by bleomycin and monocrotaline, ACE2 has been shown to protect from chronic lung injuries, fibrosis, and pulmonary vasoconstriction [22][23].
It is also pointed out that the decrease in the catalytic function of ACE2 disrupts the RAAS in lungs, resulting in increased inflammation and vascular permeability mediated by ACE/AngII/AT1 axis [24]. On the other hand, the ACE2/Ang1-7/MasR pathway plays an important anti-inflammatory and anti-oxidant role protecting the lungs against ARDS and lethal avian influenza A H5N1 infection. It has been shown that avian influenza A H5N1-infected patients exhibit markedly increased serum levels of Ang II which appear to be linked to the severity and lethality of infection, at least in some cases. Infection with avian influenza A H5N1 virus in experimental mouse models results in the downregulation of ACE2 expression in the lungs and increased serum Ang II levels. Genetic inactivation of ACE2 causes severe lung injury in H5N1-challenged mice, confirming a role of ACE2 in H5N1-induced lung pathologies. Additionally, the application of recombinant human ACE2 (rhACE2) improves avian influenza H5N1 virus-induced lung injury in mice. These results suggest (a) that in acute lung injury, there are decreased ACE2 and increased Ang II levels, and (b) that ACE2 can be supplemented with recombinant ACE2, and Ang II could be inhibited, resulting in improved outcomes [25]. As recent studies in animal models confirmed, ACE2 could be considered as a potential down-regulator for the RAAS. It is also worth mentioning that in addition to the studies on animal models, there are also a certain number of studies conducted on human models of pulmonary arterial hypertension (PAH), which will be discussed later.
Promoting the ACE2/Ang1-7/MasR signaling by rhACE2 or the Ang 1-7 receptor agonist could also be a promising therapeutic approach in lung disease from diverse etiologies [26]. For example, the Ang 1-7 receptor agonist AVE 0991 has been shown to exert cardio-renal and pulmonary protective effects [27], and treatment with rhACE2 improved the symptoms of acute lung injury, cardiovascular disease, and kidney injury in various preclinical models [28]. Therefore, ACE2 could be considered as a key player in the counteraction of the classical RAAS system because it metabolizes the vasoconstrictive, hypertrophic and proliferative Ang II into the more favorable Ang 1-7 [29].

The incidence and prevalence rates of chronic inflammatory lung diseases are increasing despite all the available medications and therapies. Given the fact that the majority of the described models of ACE2 receptor involvement in chronic inflammatory lung diseases came from animal models of acute inflammatory lung diseases, it is necessary to conduct more studies on humans, aiming to gain better insight into the pathogenesis of the disease. Our research group is largely focused on the genetic diversity of different genes involved in the innate immune response in patients with COPD and lung cancer, and functional studies of disease-associated variants. We would be very interested to see how specific genetic variants of ACE2, in these groups of patients, affect protein function and regulation of the RAAS, and whether these changes are potentially responsible for the pathological condition. It is also worth mentioning that ACE2 was analyzed as a potential biomarker for SARS-CoV-2 infection risk in lung cancer patients. It seems that upregulated expression of ACE2 in lung tumors might increase the susceptibility to COVID-19 infection [30]. On the other hand, Feng et al. found that ACE2 overexpression, regardless of SARS-CoV-2 infection, may have a protective effect by inhibiting cell growth and VEGEF production [31]. Therefore, it seems to us that ACE2 could be considered as a potential biomarker of inflammatory lung diseases or even a standard component in the medical treatment of COPD, asthma or pulmonary hypertension.