Carbon-based nanofluids are made of ND, graphene, and CNT, etc., and can be employed in some of the commonly known thermal applications in the energy industry. In addition, it possess the most favorable thermal properties and, when well handled, physical properties compared to any other type of nanofluids or conventional fluids. This is because these carbon-based materials, when dispersed in a base fluid attain unique features such as high thermal conductivity and specific heat capacity, high heat transfer rate, and lower pressure drop in the working system compared to other types of dispersed nanomaterials. Furthermore, the aforementioned suspensions cause the least corrosion and erosion effects on the hosting device, all of which are crucial parameters for the operation cycle. Moreover, the influence of the stability of these suspensions on their thermophysical properties was also highlighted along with the development in these properties prediction correlations.

Since the 20th century, scientists have been working with considerable effort to develop fluids that can surpass those conventionally known by the scientific society and industry in terms of thermal and physical performance. The idea of dispersing solid particles of millimeter (mm) and micrometer (µm) in size is the milestone, which was physically initiated by Ahuja [1][2] in 1975, Liu et al. [3] in 1988, and other researchers at Argonne National Laboratory (ANL) [4][5][6] in 1992 on the bases of Maxwell theoretical work [7]. Such suspensions have shown tremendous improvements in heat transfer characteristics compared to their base fluids. This is due to the dispersed solid particles’ significantly higher thermal conductivity compared to their hosting fluid, which would enhance the effective thermal conductivity of the colloidal. The term ‘effective’ is generally used when referring to the net property of a solid–liquid suspension [8]. However, it was found that in flow areas of low velocities, the particles hosted by the suspension tended to deposit from its carrier liquid. Additionally, hence the fluid starts to lose its tuned properties. Furthermore, clogging of small passages was also experienced due to the significant level of agglomeration between the dispersed particles, and therefore making it extremely challenging to employ in heat transfer devices containing small channels. This is when, in 1993, Masuda et al. [9] conceived the idea of fabricating suspensions with ultrafine particles of silica, alumina, and titanium dioxide, where these dispersions were afterward given the name ‘Nanofluids’ by Choi and Eastman [10], in 1995, as a result of their extensive research work at ANL. According to the founders, a nanofluid can be generally defined as an advanced category of fluid that is produced by homogeneously dispersing low concentrations (preferably ≤1 vol. %) of particles of less than 100 nanometers (nm) in size within a non-dissolving base fluid [11].

Carbon ranks as the 4th most common element after hydrogen, helium, and oxygen in our solar system, and the 17th in the crust of our planet [12]. Remarkably, this element is distinctive so that when the crystal structure of carbon atoms is changed into deferent arrangements, the material properties significantly differ [13][14][15][16][17][18]. For example, both ND and graphene are made of carbon but of different atomic bounds arrangement. While the first is an electrical isolator and transparent towards visible light waves, the second has excellent electrical conductivity with complete visible light blockage. Such materials that contain various arrangements of carbon atoms are known as ‘allotropes of carbon’, which means that the material has chemically identical elements but with different atomic arrangements, and hence different physical properties.

NDs have existed for billions of years in nature within meteorites, crude oil, interstellar dust protoplanetary nebulae, and different sediment layers of the Earth’s crust. Nevertheless, the synthetization process of this valuable material only started in the second half of the nineteenth century through either exposing graphite to high pressure and high temperature conditions, or by the explosive detonation of bulk graphite [19][20][21]. The first is known as the high-pressure and high-temperature (HPHT) approach, whereas the second route is known as the detonation technique. In the literature, it was reported that the first study conducted on the preparation of NDs was performed by Bovenkerk et al. [22], in 1959, after which Danilenko [23] used the detonation technique as part of his synthesis approach. Furthermore, many approaches were developed afterward for fabricating ND, such as the microplasma-assisted formation [24], chemical vapor deposition (CVD) method [25], laser ablation [26], high energy ball milling of microdiamonds produced from high pressure and high temperature conditions [27], high energy ball milling of ultra-fine graphite powder [28][29], ultrasound cavitation [30], chlorination of carbides [31], carbon onions irradiated by electron [32], and irradiation of graphite by ion beam [33]. In addition to the previous synthesizing methods, El-Eskandarany has proposed a novel approach for producing superfine NDs from commercial graphite powders and SWCNTs under ambient temperature and atmospheric pressure conditions, using a high-energy ball mill technique [34]. It is important to note that, according to Ali et al. [21] and Mochalin et al. [35], the most common types of NDs seen today are the detonation NDs (DNDs) and the HPHT-NDs. From the aforementioned production routes, it can be concluded that the synthesized NDs can only be produced as independent solid particles, and therefore cannot be grown within liquids through chemical and/or physical approaches. Regardless of the method used, the production of NDs usually involves three major phases, which are 1—synthesis (methods mentioned earlier), 2—processing, and 3—modification. The processing stage, which follows the synthesis phase, enhances the as-produced NDs purity by removing the metals and metals oxides along with the non-diamond carbons that remain attached to the ND surface. Hence, a high level of sp3 carbon bonded diamond nanoparticles can be obtained. This can be done by using oxidants such as nitric acid (HNO3), perchloric acid (HCLO4), or hydrochloric acid (HCL) [36]. Furthermore, the modification phase is essential so that the fabricated NDs can meet the requirements of their targeted application. Modification can be performed using either surface functionalization (widely used) or doping of the NDs particles. It is important to note that some researchers have recently started focusing on the doping technique due to the distinct optical properties gained from this NDs modification approach [37][38]. Figure 1 shows the three phases involved in the production of NDs [39]. Figure 1. Phases involved in the production process of nanodiamonds, where (a) illustrates the synthesis phase, (b) demonstrates the processing phase, and (c) shows the modification phase. Reproduced with permission from [39]. Elsevier, 2019.

Graphene is a type of carbon material that originates from bulk graphite. It has the shape of a 2-dimensional (2D) (i.e., monolayer) sheet of one-atom thickness and lattice of hexagonally arranged sp2 bonded carbon atoms [40]. The material itself was successfully synthesized for the first time in 2004 by Novoselov et al. [41], through mechanical exfoliating graphite with Scotch tape. Furthermore, the development in the field has resulted in categorizing graphene by the materials architecture structure, which ranges from zero-dimensional (0D) graphene quantum dots, one-dimensional (1D) graphene fibers and nanoribbons, and 2D graphene nanomesh, rippled/wrinkled and multisheet [42]. Figure 2 shows an illustration of the different categories of graphene based on their dimensionality and bandgap opening. Regarding 2D graphene sheets, few suitable techniques are commonly employed for producing such material, which are mechanical exfoliation [41], sublimation of silicon carbide (SiC) [43], laser-induced graphene [44][45], covalent [46][47] or non-covalent [48] exfoliation of graphite in liquids, and CVD growth [49]. These fabrication methods produce graphene in a solid form except for the liquid-phase exfoliation, which delivers the material as part of a suspension. Figure 2. Different forms of graphene based on their dimensionality and bandgap opening, where graphene quantum dots, graphene nanoribbon, and both graphene nanomesh and graphene rippled/wrinkled have a structural dimension of 0D, 1D, and 2D, respectively.

Although carbon is known as a ubiquitous material in nature, CNTs are not, where this allotrope material is a human-made seamless cylindrical form of carbon. It is believed that the oldest CNTs existed on damascene swords [50]. Still, their first proof of presence was in 1952 through the transmission electron microscopy (TEM) images published by Radushkevich and Lukyanovich [51], after which Boehm [52] and Oberlin et al. [53] obtained similar images along with describing the currently widely accepted CNTs growth model. Conceptually, CNTs are graphene sheets rolled into cylindrical tubes, of less than 1 nm in diameter, with a half fullerenes caped end. Based on the number of consistent tubes (i.e., rolled-up graphene sheets), CNTs can be classified as SWCNTs, DWCNTs, and MWCNTs. As the terms suggest, the SWCNTs consist of only one tube, whereas DWCNTs and MWCNTs comprise two and three (or more) tubes, respectively [54][55]. Figure 3 shows the mechanism in which CNTs are formed and their three different types. It is important to note that some researchers distinguished between the three tubes form of CNTs and those of a higher number of tubes, where they have categorized the first as the triple-walled carbon nanotubes (TWCNTs) and the second as MWCNTs [56][57]. 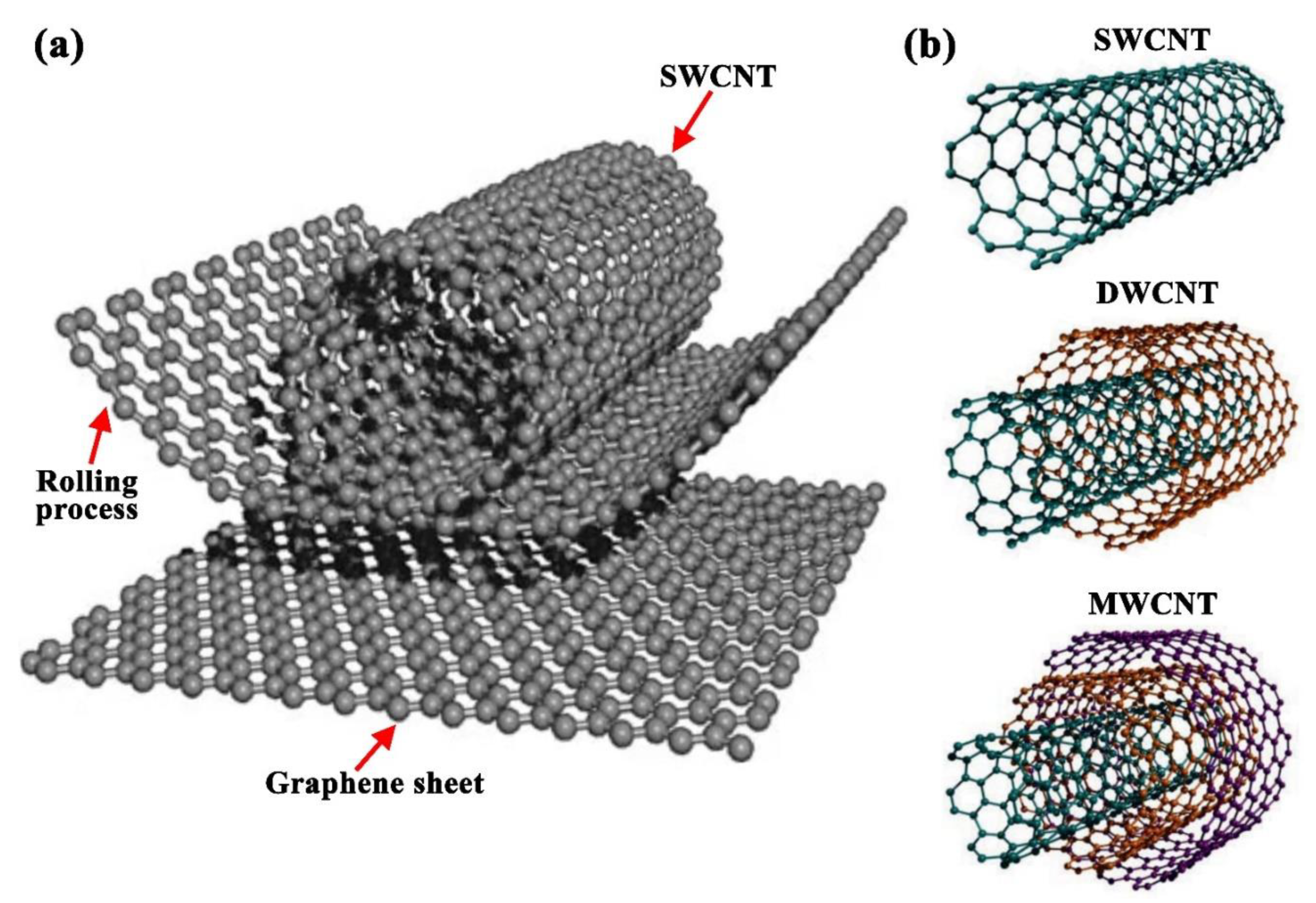 Figure 3. Carbon nanotubes formation and classifications, where (a) illustrates the rolling mechanism of graphene sheet into SWCNT and (b) demonstrates the three different categories of CNTs, namely SWCNT, DWCNT, and MWCNT.

We provide a comprehensive state-of-the-art review on carbon-based nanofluids, including the initial synthesis methods used for producing carbon nanotubes, graphene, and nanodiamonds, and up to the employment of their dispersions into thermal energy applications, namely; parabolic trough solar collectors, quenching systems, and air conditioning and refrigeration systems. It was shown how some of these nanomaterials could only be fabricated in a dry form, such as high purity nanodiamonds, whereas graphene, for example, can be produced as a dry powder or a suspension. Thus, when selecting the nanofluids’ preparation approach containing these nanomaterials, the available options can be narrowed from two routes to only a single process. Furthermore, the main equations used in calculating the volume concentration that are commonly required for the nanofluid two-step production method were provided.
Moreover, the physical stability of the suspension, which is considered as one of the most influential aspect that can dramatically affect the thermophysical properties of any nanofluid, was discussed in terms of its formation mechanism and evaluation approaches. Although there are many advanced ways to characterize the dispersion stability, it was concluded that the photographical capturing method remains the most reliable approach due to its capability of determining both short- and long-term dispersion stability of the mixture in real-time and at high accuracy. Nevertheless, this method is very time-consuming to conduct, especially when the characterized sample is of high state of stability. In addition, chemical methods, such as surfactants and surface functionalization; and physical approaches, namely, ultrasonication, magnetic stirring, homogenizer, and ball milling, were also discussed and shown in how they can be employed to improve the level of particles dispersion within an instable suspension. It was concluded that, unlike the chemical approaches, using physical methods for enhancing the dispersion stability is a better option when it comes to conserving the optimum possible effective thermal conductivity of the nanofluid and that between the available physical routes, the homogenizer can provide the best outcomes. In general, the stability of the suspension does not affect the mixture density nor its specific heat capacity but rather influences both the effective thermal conductivity and effective viscosity of the nanofluid. These two properties were seen to degrade gradually with time due to the nanomaterial’s agglomerations and their sediment formation.
Many methods were shown to determine these two properties (i.e., effective thermal conductivity and effective viscosity), either by experimental means or through pre-existing correlations. Still, up to today, the scientific field has failed to provide a universal formula for both of these two properties, and hence the only reliable approach is through experimental analysis. When it comes to replacing conventional working fluids with carbon-based nanofluid in thermal applications (i.e., parabolic trough solar collectors, nuclear reactor systems, and air conditioning and refrigeration systems), it was proven, at least at the lab and pilot-scale, that such advanced fluids are very beneficial in terms of enhancing the overall performance of these systems, and can therefore be seen as strong candidates for such industries when their associated challenges are solved and fully understood.