Phenotypes are set, observable variables that an organism displays when interacting with its environment. These variables are influenced by genotypes, which are complex and inheritable. Phenotypes can be measured continuously (e.g., assessing the change in an animal’s body temperature over a day) or categorically through the use of concise scoring systems. When the phenotypes of an animal are measured and collected for use as data points, the process is described as phenotyping.

The success and advancement of the livestock industry significantly influence the success of the human population. The human population is expected to expand to 9.7 billion by 2050, placing an increased demand for production on livestock farming methods that have already pushed the limits of efficiency [1]. Confined farming operations have maximized the production of food animals while minimizing space, and other scientific advancements have abbreviated production time. However, the livestock industry also faces growing public awareness of animal welfare and consumer pressures to provide animals with more humane living conditions.
The demands for more livestock production and improved animal welfare seem to contradict [2], but there is a modern solution to both of these pressures—digital phenotyping. This minimally invasive method of data collection has shown promising results in human-based studies while suggesting many applications in the field of animal agriculture. Through the innovations of digital phenotyping, farm animals can be bred, housed, and cared for in ways that improve their production rates, resilience, and well-being.

1.2. Heritability of a Phenotype

In the agricultural industry, phenotypes represent an important source of information for many reasons, chiefly because they are indispensable in relation to breeding. Because phenotypes are influenced by genotypes, they offer a minimally invasive or non-invasive indicator of an organism’s genetic makeup. By thoroughly understanding phenotypes, the agricultural industry can breed animals with balanced traits related to resilience and production. Research has shown that a multitude of behavioral and physical traits are heritable in animals, including feather pecking in laying hens, immune response in most farm animals, and cannibalism in pigs [3]. If animals are bred to reduce destructive behaviors and promote more relaxed and compatible behaviors, their welfare will improve. It is also interesting to note that, although not all behavioral and medical conditions may be congenital, genetic traits displayed through phenotypes can predict the susceptibility of an organism to certain conditions [4].

Digital phenotyping has been most heavily studied in humans because it provides great opportunities for medical advancement with minimal chances for negative side effects. The phenotypes are chosen and assessed in relation to biomarkers, which are digital measurements of phenotypes (Figure 1) that are categorized according to the intended use of the collected data. The assessment of medical issues in individuals is relatively similar across the spectrum of complex living organisms, especially mammals, which makes these biomarker categories valuable for use within the agricultural industry [5]. 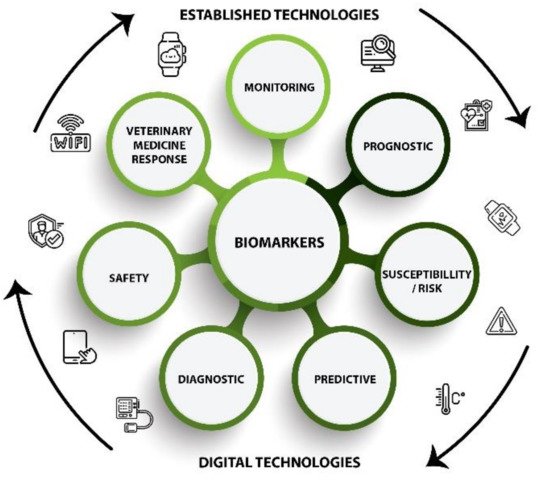 2. Impact of Phenotyping in the Livestock Sector

Phenotypes are the basis of generating a more comprehensive understanding of the complexities of raising high-quality livestock. Many aspects of successful agriculture are interrelated and stem from a common point, which is animal welfare. Increased use of antibiotics by farmers for increasing the food safety aspects as part of animal production has devastating consequences for the welfare of animals. Hence, there seems to be an inverse relationship between animal production and animal welfare. However, increasing evidence suggests that animal welfare measures can actually be contributing to sustainable and profitable animal production.

Although animals and humans vary in many aspects, they share the need for individual well-being. The multidimensional concept of welfare addresses this universal need by prioritizing the psychological, emotional, behavioral, and physical aspects of an organism’s needs. When animals have each of these needs met, they are most likely to experience a positive sense of well-being among other benefits [3].
The welfare of farmed animals is a necessary but complex topic, as their anthropogenically determined purpose is to produce food, but this often comes at the expense of their lives. Many countries have welfare guidelines that seek to regulate the humane treatment of farm animals, but these guidelines can often fall short of meeting an animal’s actual welfare needs. The only feasible way to create an unbiased assessment of welfare is through phenotyping. Digital phenotyping can assess all of the facets of welfare, even emotional states, which have repeatedly demonstrated accurate measurements from digital phenotyping in humans [6][7][8].

This topic of welfare is highlighted as important to the agricultural industry because animal behavior has a serious impact on production. Animal emotions, which are expressed as aggressive/stress/anxiety/depression related behaviors, have an impact on animal production. The production of farm animals depends not only on the genetic factors and behaviors, but also on animal emotions, which are influenced by several factors including the environment, the relationship with humans and other conspecifics, and the social and emotional development of the animals. Animals with aggressive tendencies toward others can exhibit cannibalistic behavior, guard food sources, endanger caretakers, and cause other disruptive issues within a farm of any scale, especially confined operations. Many behaviors appear to be hereditary, allowing farmers to breed for beneficial behaviors if the target genes are known [3].

The products obtained from farm animals are generally selected for quality and quantity, attributes that may not be identifiable until an animal is at its production peak. At such a point, it may be impossible to breed an animal and pass on its favorable characteristics, making the predictability of production an important consideration. The predictability of actions and outcomes from phenotypic data has been effective in human populations with complex attributes, including physiological states [9]. This information offers great promise in its future application to production-based predictions of livestock.

Breeding in pursuit of highly productive traits is not equivalent to breeding toward strong reproductive capacities. A prioritization of productivity alone can decrease the resilience and generalized physical fitness of many animals, as demonstrated by the biased or non-data-based breeding of dairy cattle. In contrast, phenotyping provides an opportunity to choose well-rounded breeding animals and to create complementary pairings for stronger future generations [10]. It also helps facilitate breeding interventions at times that maximize fertility and survival.

Diseases and dramatic natural environmental changes are two factors in farming that are nearly impossible to contain. These factors create a great economic burden and reduce production, but the solution exists within livestock [11]. Their resilience and robustness in the face of these challenges are heritable to some degree and can prepare a population to better face unknown challenges [3].
Certain forms of phenotyping have been used effectively to assess the resilience of an organism to pathogenic and environmental stressors, including events such as heat stress [12]. The more resilient members of a livestock group can then be singled out based on their phenotype analysis and used to proliferate their positive traits.

Modern technology has provided a solution to this dilemma in the form of digital phenotyping devices with various biomarker focuses. Not only have many of these devices been comparable if not superior to previous methods, but they also eliminate data-collection bias and reduce the need for stressful human intervention. Furthermore, they collect data at times and in quantities that would be impossible to achieve on a human-facilitated level [13].

When phenotypes are only quantifiable through the use of a specially constructed scale or assessment, there is a higher chance of observer bias, especially in the agricultural industry where workers may not share the same regard for all animals [3]. In a review of human biomedical literature, it was found that trained medical professionals could only predict human patient outcomes accurately based on standardized scoring systems 21.4% of the time [14].

Wearable sensor technologies are slowly replacing human-based phenotyping in the medical industry. The capacity of digital biomarkers to offer phenotypic predictions of long-term prognosis using wearable sensors has been demonstrated for predicting anxiety symptoms [15], estimating depression severity [16], and detecting daily life stress [17]. There are plenty of reasons that support this digitally dependent shift, but here are two of the most prominent reasons relating to agriculture.

High-throughput phenotyping refers to the speeds and quantities at which digital sensor devices can relay data. Human error is a well-known phenomenon in the scientific field, and the most reliable solution is often the addition of automated and technologically advanced elements. These sensors are capable of accurately producing rapid and continuous data points [3]. Their only limits tend to be battery life and range, which are minimal in comparison to the limits of humans attempting to record the same data.

Phenotypes are influenced by a multitude of factors, including environmental changes. When phenotyping data are collected, they are normally observed in association with a certain target, which leaves blind spots for influence by variables that were not apprehended. This event is well explained by a study that sought to determine the cause of fatigue in humans, only to find that the experience of fatigue hinged on diverse phenotypes that were both environmentally and biologically influenced [18]. The method of phenotyping with a specific focus can also influence inaccurate conclusions and actions that lead to trade-offs. In the agricultural field, these trade-offs are most commonly in favor of production but frequently decrease livestock resilience [11].

Digital phenotyping represents a beneficial opportunity with several complexities. Namely, it can provide an extrinsic way of enhancing the knowledge and prediction of resilience and disease-indicating factors among farm animals, but it also further removes any relationship between animals and caretakers [19]. Furthermore, digital phenotyping can only complement human interventions and cannot offer a causal explanation for the data collected. Despite these significant considerations, digital phenotyping for livestock represents an emerging direction of research and potential application efforts that are both scientifically intriguing and practically warranted.