The benefits of using natural fibres (NFs) such as Coir, flax, hemp, and bast fibres as a reinforcement in polymer composites than synthetic fibres, are low cost, lower density, more recyclable and have greater “biodegradability”. Alkali treatment is used to breaking down the bundles of fibres into individual fibres. This process results in an increased aspect ratio of the smaller fibre particles and makes the fibre surface rough, which helps in increasing the interfacial bonding between fibre and the matrix material. Alkali treatment is an effective surface treatment method, helpful in removing some amount of lignin, impurities, which covers the fibre surface, depolymerize the cellulose structures. The main problem in the development of the NF composite is their less adhesion ability with the matrix. Mercerization is one of the best ways to improve fibre-matrix adhesion. Because of the hydrophilic nature of the fibre, Chemical treatment is found to be one of the great solutions that make the fibre surface rough and removes fatty deposits from the fibre called “xyloses”. Alkali treatment results in the rough fibre surface and enhances the fibre surface area, leading to the excellent interlocking with the matrix.

Natural fibres are an excellent replacement for the conventional fibres because of their high mechanical strength; they are the good options in many applications such as building and constructions, furniture, automotive, etc. The main problem of utilizing these fibres comes with their adhesion ability. Because of their hydrophilic nature, they are inferior to adhesion ability with the hydrophobic matrix. To solve this problem, various types of physical and chemical treatments are available. However, the chemical treatments are observed to be a good option to make them hydrophobic. Alkali treatment is the effective treatment that removes the wax and oil contents from the fibre surface and makes them rough, and enhances the adhesion strength with the matrix. Numerous natural fibres are available which are having excellent mechanical properties. Figure 1 shows the classification of natural fibres. 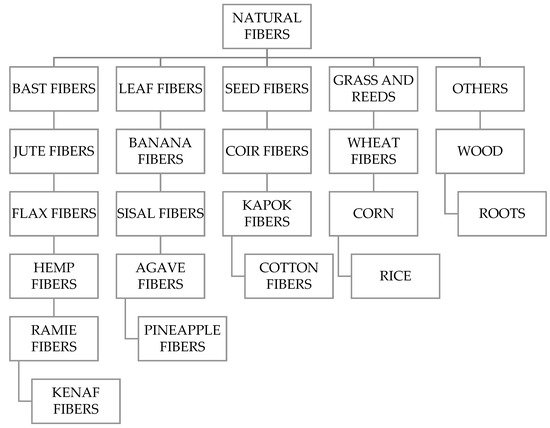 These fibres are found in the plant’s inner bark and give structural strength and rigidness to the stem of the plant. These fibres remained as the bundles of the fibres and are placed parallel to the stem. The dimension of the bast strands varies, i.e., the length of the strands is up to 100 cm, and the width is about 1 mm [1].

The following are fibres that can be acquired from plant leaves:

The Alkali/Mercerization treatment of the NF surface is considered an effective treatment amongst the other available chemical treatments. A sodium hydroxide (NaOH) solution is utilized in this treatment, which reacts with the available OH groups in the cellulose and partially removes the lignin, pectin and hemicellulose, and waxy and oils from the surface of the fibre and provides enhanced adhesion strength. The treatment of the natural fibres by Sodium hydroxide (NaOH) causes advances in the ionization of the OH groups to the alkoxide [10]. The chemical equation (Equation (1)) can be understood as follows:

Mishra and co-workers perform the alkali treatment on the jute fibres and the sisal fibres by utilizing 5 wt. % NaOH solution up to 72 h. Researchers noticed that mercerization enhances the amorphous cellulose content by decreasing the crystalline cellulose [11]. Researchers also concluded that the effect of the mercerization or alkali treatment results in the improving the roughness of the fibre leading to the excellent adhesion ability with the matrix and the improvement of the cellulose content “on the fibre surface [12]”. Budtova and co-workers [13] reported that alkali perforates into the amorphous region resulting in the swelling of the cellulose fibres. The polymer chain then diffuses the alkali in the lateral direction and forms an alkali complex. After that, the alkali perforates into the crystalline region and develops an antiparallel crystalline soda complex known as Na-Cell II. Alkali treatment ultimately improves the adhesion strength between the fibre and the hydrophobic matrix leading to the improvement in the various mechanical properties, specifically tensile strength. Jayabal and co-workers [14] reported that by performing the 5 wt. % alkali treatment on the coir fibres increases tensile strength values (approx. 31%). Much more research reported that the chemical treatment ultimately enhanced the composite’s mechanical properties.

Zizumbo et al. 2011 [15] used alkalized (12 wt. %) bagasse fibres and observed that the young’s modulus of composites had become 1800 MPa, which is greater than the untreated bagasse fibre composites. This is due to the high surface area available after eliminating hemicellulose and lignin, which enhances the composites’ mechanical properties.

Thamae et al. 2007 [17] performed the alkali treatment on Agave Americana fibres and showed the fibre tensile properties using the Weibull statistics. Weibull distribution showed fibre strength distributions. Additionally, when these fibres are treated with NaOH, then it shows an improvement in characteristic strength by 30%. This is because of the removal of the impurities from the fibre surfaces.

Goud et al. 2011 [18] performed alkali treatment on the Roystonea regia fibre (royal palm) at 5 wt. % for 2 h. The authors concluded that an increase in all of these properties is noticed by increasing the fibre loadings. Authors also reported that alkali-treated fibre composite shows approximately an improvement in tensile properties by 8%, 8.2% improvement in tensile modulus and about 2.6% increase in young’s modulus at 20 wt. % fibre content.

Karthikeyan et al. 2012 [20] show that the alkalization increases the impact strength of the coir fibre composites. They performed alkalization at different concentrations such as 2, 4, 6, 8, and 10% for 10 days. The alkalization/mercerization makes the fibre surface rough. It provides the better interlocking between the fibre and the matrix as the greater surface area is available leading to the greater mechanical strength, specifically impact strength.

Kumar et al. 2013 [21] utilized alkali treatment (5 wt. %) to modify the bamboo strip mats. It reinforced it along with nano-clay into the polylactic acid resin. Authors with the help of Figure 2 showed an improvement in the mechanical properties such as tensile values and impact values. The increase in the mechanical properties was due to the good adhesion strength at the interfaces, which is only achieved by the chemical treatment of the bamboo fibre mats. 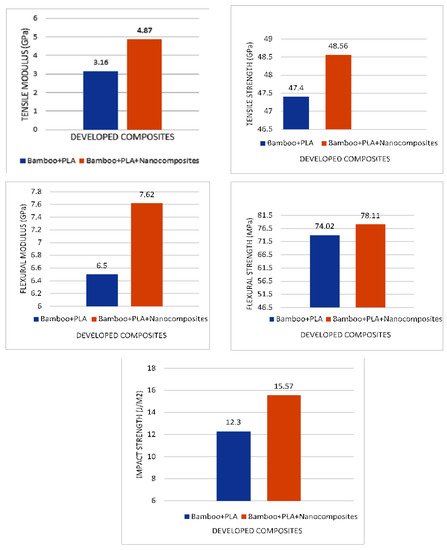 Panneerdhass and co-workers [22] used alkali treatment (2 wt. %) for 30 min on the luffa fibre and the groundnut shell and reinforced the treated fibres in the epoxy matrix. They evaluated different mechanical properties such as compression, tensile, bending/flexural, and impact strength. Figure 3 shows the impact strength of the composites. From the figure, it is observed that the impact strength increases till the 30 wt. % of the fibre fraction, i.e., after that, a reduction in the impact values was observed. The maximum values of the impact strength are observed to vary from 0.6 to 1.3 joules. Similarly, the tensile strength varies from 26.66 MPa to 52.22 MPa, and flexural strength was also found to be optimum for the 30 wt. % of the fibre content. The results are shown in Figure 4 and Figure 5 for both of the mechanical properties. 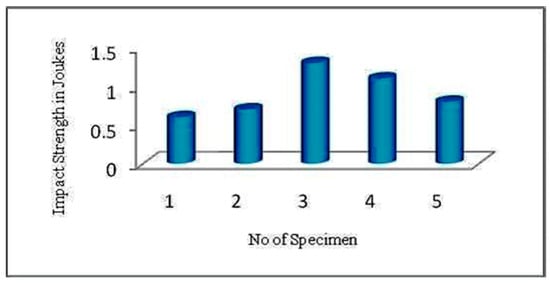 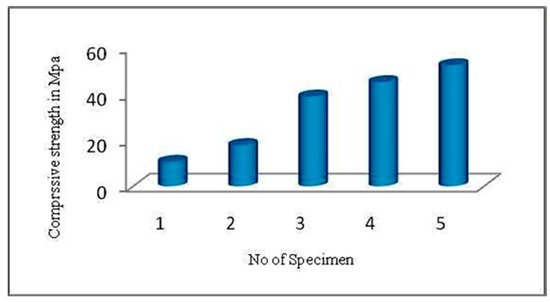 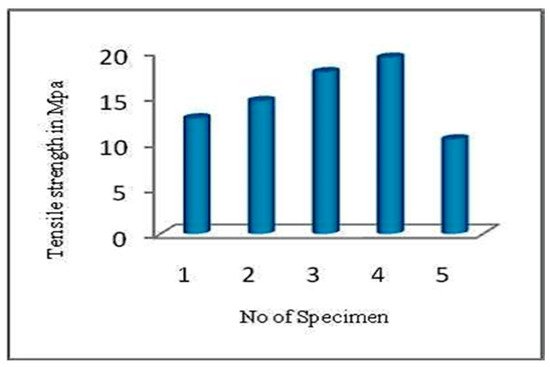 Rwawiire et al. 2015 [23] used biodegradable bark cloth and chemically treated it by alkalization (5 wt. %) process and reinforced it in the epoxy matrix for the automotive application. The authors noticed that alkalization/mercerization ultimately enhances the adhesion strength of bark cloth with the matrix material. The excellent adhesion ability exhibits good mechanical properties. A good enhancement in the different mechanical properties was observed and shown in Table 1.

Takagi et al. 2016 [24] treated bamboo fibre by alkali treatment, reinforced it into a PLA matrix, and developed a bamboo/PLA composite, and evaluated their mechanical properties. The alkali treatment makes the fibre surface rough and enhances the adhesion strength of the fibre with the matrix. Figure 6 shows the tensile strength of the PLA and steam-exploded bamboo PLA cross-ply laminate composite by utilizing the hot press method. The results show that the tensile strength and elastic modulus of the laminates are observed to be 223 MPa and 10.3 GPa by reinforcing 68 wt. % of bamboo fibres. 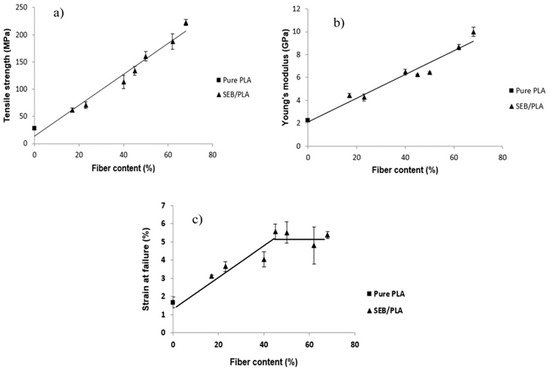 Balakrishnan et al. 2017 [25] performed the alkali treatment (2 wt. %) on the pineapple leaf fibre and reinforced it to the potato thermoplastic starch for the development of the nanocomposites. The morphology of the fibre can be understood by Figure 7a,b. From the figures, it can be observed that the fibre surface becomes smooth, which signifies the removal of the waxy substances and impurities from the fibre surface.

Bigliardi et al. 2018 [26] utilized cellulose nanocrystals from the coffee husk and performed the alkali treatment on these nano-crystals. They utilized these nano-crystals into thermoplastic starch and developed a biocomposite. The authors observed that by keeping the aspect ratio to more than 10, there is 121% enhancement was observed in the elastic modulus of the composite. Figure 8 shows the tensile behaviour of the corn starch biocomposites films with and without cellulose fillers (1 wt. %). The tensile behaviour shows the different tensile properties of the bio-composites, such as tensile strength, modulus of elasticity and percentage deformation, etc. Figure 8 shows that the nano-crystals enhance the modulus of elasticity of the biocomposites film than the fibres. 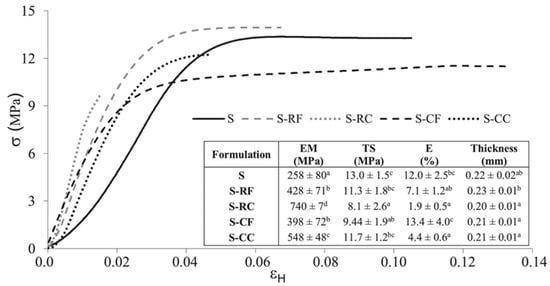